Hi guys. My name is Yepes (its pronounced "jepes") and I present you this type of tempo mage I´ve been playing since the start of KoFT. I´ve been playing hearthstone since late naxxramas and also i´ve played a lot of other card games in the past. Now i´m kind of casually playing because of university but if you guys give me feedback of this deck I promise to upload new things and make this guide fully complete.

The archtype of this deck it´s not mine, a lot or versions of this deck have been moving around for a long time but the idea to create it with the LK and some other variants was mine. This is a mid-tempo aggroish deck. At the beginning I created the deck to be more aggroish but struggled a lot with control matchups so I decided to put Hydras, the LK and Bonemares in order to give it more consistency in the late run.

This season my best score with this deck was a 16-1 (94% winrate) in which I went from rank 18 to rank 10 in a streak. In other seasons I managed to get to rank 8-5 with this deck without any problems

Sorcerer's Apprentice: A lot of you asked me why did I put this card. First answer is because it´s threatening and it´s also one of the best early drops a mage can have. When dominating the board it can stick to it and bring you a lot of potential. Having Fireball for 3 mana or Frostboltfor 1 mana it´s something to consider. It also makes you to play more on curve. You can consider to cut one copy of it and add Golakka Crawler if you are facing a lot of rogues.

Secrets: I am now playing with 2 Counterspell and 1 Mirror Entity. Some of you told me playing with only 3 secrets its too low and you are right but I prefer to play with this 3 secrets in low ranks because if your opponent doesn´t know what secrets you are playing (maybe because he hasn´t played a lot or doesn´t have a deck tracker) and you manage to pull a good Mirror Entity it can literally win you the game. Consider to cut the Mirror Entity for Spellbender post rank 15.

Primordial Glyph: This is one of the key cards of your deck. It´s impossible to change for another card because its so flexible it can give you the spell you need in the situation you need. If you are struggling against aggro it can give you a cheap AoE removal or if you are pusing for lethal it can give to a fireball por 2 mana or a free frostbolt. If you don´t have 2 copyes of this card I strongly recommend you not to play this deck.

Bittertide Hydra: This is a tempo deck, and it really shines if you are winning on the board. If you pull an hydra in turn 5 and your opponent doesn´t remove it it will win you the game against some classes. Beware of priests and Shadow Word: Death and try to bait it before you play the hydra. Against druids this card is awesome, they don´t have a way to remove it efficiently. The only disadvantage to this card is that sometimes is a dead draw if you are losing on the board or a Paladin can change its attack to one and literally that would cost you the game, but paladins are not really present in this meta. I recommend at least 1 copy of it but if you don´t have it change it for Cobalt Scalebane, Faceless Summoner or Leeroy Jenkins

The Lich King: This is the powerhouse of your deck. This card is instant value and can twist you some games you thought you were going to lose. It´s really annoying, it´s and automatic threat on the board and can give some great spells. Frostmourne can be used to go face. This is one of the hardest cards to replace. I think you can replace it with maybe Frost Lich Jaina or Leeroy Jenkins. With the first replacement your deck will be a hell of a lot slower and with Leeroy you will have more face damage and you will close sooner you games but you will struggle to aggresive decks. I don´t recommend you to cut this card. You could also put a copy of Pyroblast

Always keep every time your 1-2 drops and try to have Kirin Tor Mage and a secret if you have the coin.

Always keep (coin): Mana WyrmPrimordial Glyph Arcanologist Kirin Tor Mage (only keep it if you have Arcanologist and / or a secret.

Tip: Never use counterspell if your opponent haven´t used the coin, they can bait your counterspell.

Think about it:
Frostbolt : Against priest, aggro druid and hunter.

Secret +  Kirin Tor Mage: If you have the coin and you are facing a control archtype.

General tip: You should always make tempo. This is a tempo deck, you should always care about your board presence and take advange of it. An early big mana wyrm that is protected with your other minions and/or spells could sometimes win you the game. Another thing to always consider is your secrets. They are so valuable, so don´t overextend and use them wisely, your Cabal Couriers will appreciate that.

Warrior: I think the only possible matchup is nzoth warrior or quest warrior because pirate warrior is pretty dead. You should never overextend because they have a lot of removals and taunts. Take advantage of your early game (because they will always leave you the board in the early stages of the game) and push for face damage early on. Bittertide Hydra can be awesome if they have already used Execute so try to bait it before you play the hydra. Easy matchup if you push early, complicated matchup if you have dead draws; The Lich King can be your game savior.

Rogue: Favorable matchup if you start with a good hand. Impossible to win if he outtempo you. If you are in a meta where rogue is present, consider adding one Golakka Crawler. Hydra is your key card to win because their lack of removal, but take special attention to the 5 mana card that kills your minion, as always, dont overextend and try to bait removal with your smaller minions. This is a tempo game, you should always take that in mind.

Mage: The only possibilities is a mirror matchup or quest mage. Quest mage is supereasy to win with a good curve (you should always play on curve with this deck, always take in mind Kripps word, this is curvestone). Mirror matchup consists in who starts better so its a luck game and whoever makes the better tempo. Counterspell can be life saving if you play it at the right time.

Shaman: Very difficult matchup in my opinion. I faced a lot in ladder and they are a pain in the ass because lack of removal of this deck. Always go for aoe removals with your Primordial Glyph, remove every single nasty minion such as murloc totem as soon as possible and make the best tempo you can. Push for lethal as soon as possible, you don´t want it to be a long game. Make use of your hydra to threaten lethal, its a nasty minion that shamans struggle to deal with.

Druid: I think this deck does really well against jade druid, but not so well against aggro druid. Jade druid is a favorable matchup because you destroy him and close the game before he develops enough jades. Counterspell is so damn essential in this game, you can cut his ramp or even cancel an [card]Ultimate Infestation/card]; if you do so, you literally win the game at any case. Hydra is a pain in the ass for druids, they can´t remove it efficently. Don´t overextend or you will face a big Spreading Plague that will cost you the game.

Taling about aggro druid...this deck does not do particularly well against it, you have to be lucky enough. If you are far behind you are probably dead if you don´t have The Lich King on board. Always go for removal with your Primordial Glyph.

Paladin: Paladin can be a tough matchup. Murloc paladin is probably the best counter of this deck because of their early game and good curve. Aldor Peacekeeper on a Hydra can cost you the game and Sunkeeper Tarim can twist the tempo game. Very tough game for you, just try to be lucky and outempo him with your spells and early game. If you are facing a lot of them in your meta (which is rare) consider to change the Mirror Entity for Spellbender

Hunter: Again, a tough matchup for this game. The one who starts better wins the game because you push for lethal early on. As with shaman, always go for removal with your glyph. An early mana wyrm protected with your spells can win you the game. Hydra is very very powerful in this matchup if you are already winning because hunter doesn´t have an effective way to remove the hydra but if you are losing is a dead draw.

Priest: The dominant deck in the meta. I think this deck performs really well against Kazakus priest. Beware of all the removals Priest has and bait them, don´t overextend and position yourself for lethal. Overextend can cost you game because of little size potion and shadow word horror. Try not to play any 5 attack drop at turn 8 because of Anduin and try to bait it. If he plays Anduin and is low on health, most of the times you will win. Kill Radiant Elemental asap, it can cause you a lot of troubles.

Warlock: It´s a 50-50 matchup. I didn´t faced any keleseth aggro warlock this season but the matchup is the same as rogue, its a tempo game, so, just go for tempo! Guldan control warlock can be tough but they do to themselves a lot of damage which is good for you so if you take advantange of that and position yourself for lethal you can win games. Siphon Soul and Defile are dangerous cards for this deck, specially for Hydra, so try not to overextend an w8 for removal to come. A defile combo with your Hydra on board its an instant lose. 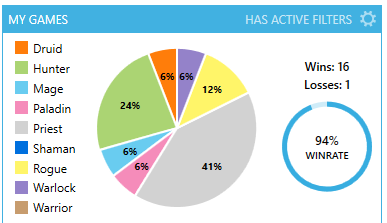