Hey everyone! Welcome to my deck list and guide for Tempo Warrior (Wild). 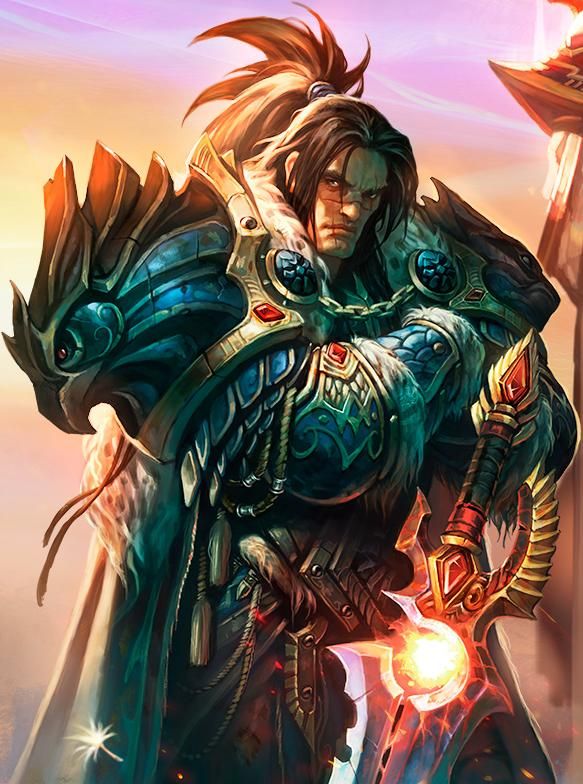 Introduction: Ever since Whispers of the Old Gods, Tempo Warrior has been one of my favorite decks. I really fell in love with Varian Wrynn in particular. In the past I usually achieve rank 5 with this deck, but have gone as far as rank 2, so the deck is definitely legend-worthy if I put more time in. I have frequently returned to Tempo Warrior when new sets come out. I am aiming to create a new build of Warrior that is both fun and ruthlessly efficient. If you are interested in how the deck has evolved over time, you can see the previous major version here: Original Revenant Warrior

Goal of the deck: Use your pirates and weapons to seize control of the early game. Use the deck's many card draw and cycling options to maintain your aggression while searching for powerful late game threats to overwhelm your opponent. Finish off your opponents by flooding the board or bursting them down.

Blood To Ichor - A good tool to catch up against your opponent when you are going 2nd. Also a cheap way to build your board while triggering an enrage effect. It remains a strong card in the late game since it enables lethal pushes with Grommash Hellscream.

N'Zoth's First Mate - This card is an early game all-star. When it pulls patches you can often kill your opponents 2 drop for only 1 mana, which puts you at a both a tempo and resource advantage.

Patches the Pirate - Simply too good of a card to not run it in any aggressive or midrange deck.

Sir Finley Mrrgglton - Our Armor Up doesn't do us very much good unless we happen to be against Freeze Mage. Finley lets us select either a hero power that gives us more reach, like Life Tap or Steady Shot, or a hero power that lets us fight harder for the board, like Fireblast. As a bonus, Finley gives The Curator an extra draw in the late game.

Battle Rage - It is so easy to get value out of Battle Rage in this deck since we have so many durable threats. Battle Rage will often draw 3 or more cards, which is just insane value.

Bloodsail Raider - A good two drop, especially when it pulls Patches from your deck. Raider is at it's best when played after N'Zoth's First Mate.

Cruel Taskmaster - Basically good for all the same reasons that Blood To Ichor is good. This is the best way to activate Grommash Hellscream's enrage.

Flame Juggler - Not as strong of a card as Bloodsail Raider, but Warrior has underwhelming 2 mana plays since the nerf to Fiery War Axe, so this card is included so we can more consistently find a 2 drop in our mulligan. Flame Juggler's battlecry is good against Zoo Decks and Pirate decks.

Acolyte of Pain - A card draw MVP when combined with the many cheap damage effects in this deck. Frequently draws 2-3 cards.

Fierce Monkey - Another solid addition to our early game. Fierce Monkey is great for protecting our priority targets, like Frothing Berserker. Can also be draw by The Curator.

Frothing Berserker - The Demon of Pain, the Prince of Agony, Mr. Turn 4 Lethal. I think you get the idea, this card can get crazy big.

King's Defender - I miss Fiery War Axe as much as the next guys (if not more), but with the nerf, King's Defender is just better. In many games you wont get the extra durability, but a 3/2 weapon is just good.

Death's Bite - The best weapon ever made. Why wouldn't you put it in your deck. It's synergy with enrage, Acolyte of Pain and Battle Rage are just icing on the cake.

Bittertide Hydra - Face hitter supreme and another good pick up from The Curator. Yes he deals damage to us, but we can take it!

Cobalt Scalebane - Such an efficient card, if your opponent can't kill it quickly, it can run away with the game. Also drawn from The Curator.

The Curator - Crazy efficient card that allows us to play lots of small and mid-sized minions without running out of steam.

Grommash Hellscream - A great finishing card when combined with Death's Bite or any cheap damage effect.
Ragnaros the Firelord - Our lord and savior. He's a strong card that your opponent has to deal with ASAP. He single handedly wins the game if unanswered.
Varian Wrynn - The King himself. He's good when behind and good when ahead, what more do you want? Often times control decks will clear the board 2-3 times. After you play Varian they usually don't have a clean answer.

For a more defensive variant of this deck, try replacing Fierce Monkey with Ravaging Ghoul. You lose some potential Curator value in exchange for more board control and enrage enablers.

Golakka Crawler is also a good anti-aggro addition to the deck. If drawn early it can kill a pirate, otherwise it gets tutored from your deck by the Curator.

For more late game power, you can sub Bittertide Hydra for Direhorn Hatchling. Direhorn Matriarch is an additional big minion that can win you games of attrition where you are trying to exhaust your opponent's answers. It pairs well in the late game with Varian Wrynn.

I consider the 4 late game drops of this deck to be very core. Varian and the Curator both flood your hand with more options, while Grom and Ragnaros both act as finishers. With that said, there are some decent replacements, such as Malkorok or The Lich King.

In this matchup, the player with the strongest opening hand usually wins. Mulligan for cheap minions so you can contest a Mana Wyrm. Blood to Ichor is also a great keep if you are going 2nd. A 1-2-3 curve will often win this matchup for you out right, as long as you properly play around their secrets.

Freeze Mage struggles to deal with our large threats, especially Ragnaros, which allows you to pop Iceblock without triggering their Ice Barrier. We can draw as many (or more) cards as them to continue applying pressure. Without the perfect combination of board clears and freezes they will have to resort to using their burn to defend themselves, which gives you more turns to close out the game without fear of dying. Keep early game minions, Frothing Berserker and Bloodhoof Brave. Give them as little breathing room as possible and you should easily win. *Note, all of this applies to Exodia Mage as well. They struggle to deal with so many threats.*

Vs Hunter the name of the game is board control. Kill their minions whenever it's convenient. If you don't get rushed down, you will easily out value them with your weapons and taunts. You can often run them out of steam. Keep N'zoth's First Mate, any of the decks 2 mana minions and Frothing Berserker are all great. Death's Bite is also a great keep if you already have cheap minions in hand.

Pirate Warrior doesn't have any of the late game that we are packing, so they often get a more consistent opening hand. Keep cheap minions, Death's Bite and taunts. You need to exhaust the Warrior of resources so that your taunts and big threats can finish the game. Play Finley if you need it to curve out, otherwise hold on to armor up.

Priest has so many board clears and removal pieces, making it difficult to get a footing on the board. Don't over commit or under commit into their board clears. You need to apply pressure. Keep cheap minions in your mulligan, along with Bloodhoof Brave and Cobalt Scalebane. Bloodhoof is resistent to Dragonfire Potion and Lightbomb, while Scalebane is resistant to to Dragonfire Potion. If they have multiple board clears and heals, then better luck next time.

Warlock often takes a beating from this deck in the early game. Whenever they have to Lifetap to dig for answers it puts them closer to being burst down by our weapons, Grom, Ragnaros, etc. Warlock (especially Reno versions) struggles to deal with Frothing Berserker and Bloodhoof Brave since they are out of the reach of their mid game board clears and hit back very hard after a board clear. Always count your damage and try to set up 2-3 turn lethals.

Since Rogues usually only run Backstab and Vilespine Slayer for removal, they struggle to deal with our chunky mid-range threats like Bloodhoof Brave, Bittertide Hydra and Cobalt Scalebane. Mulligan for cheap minions and weapons, but also consider keeping one of the 3 minions above if it's convenient for your curve. Control the board and you can often run them out of steam.

Similar to the Midrange Hunter matchup, this matchup is all about board control. Clear their board whenever you can to minimize the effects of their buffs. Keep cheap minions and weapons in your mulligan. Keleseth on turn two can be difficult to beat, but otherwise you have a fair fight on your hands.

Control the board in the early and mid game. Most Shaman don't run Hex or Lightning Storm and the token focused builds are vulnerable to running out of steam, so the big swings created by Varian can be game ending. In your mulligan, keep Pirates, weapons and Blood to Ichor to smash down their Flametongue Totems and Manatides before they become a problem. Try to equip Death's Bite on turn 4 so that the deathrattle can kills a Thing From Below on turn 5.

This matchup is very dependent on getting either a good curve or a weapon. Acolyte of Pain is also great against the Recruit versions and Blood to Ichor is great for killing Murlocs or popping Divine Shields. Try to fully clear the board on turns 6 and 7 to prevent Spikeridged Steed or Bonemare from landing. Frothing Berserker is particularly hard for Paladin to deal with since they lack single target removal and many Murloc builds cut Truesilver Champion. These decks usually run one equality (at most) so our late game refills with Varian or the Curator are usually game ending.

Druid removal struggles to deal with our threats efficiently. Keep the strongest 1-2-3 curve you can get. If you are going 2nd, consider keeping Bittertide Hydra as well since Druid struggle to kill it. You should be able to kill them before their jades get too big.

The nerf to Innervate has helped a lot, but Druid still gets more consistent opening hands. Look for cheap minions, weapons and taunts. Try to be ahead on board by turn 5, otherwise Living Mana can be very hard to deal with.

This match up is very polarized. We don't run big single target removals or board clears, so our answer to a board of giants on turn 5 is just to deal lots of damage before then. Frothing Berserker is key for this as the 3 most popular giants classes (Hunter, Warlock and Druid) all struggle to have a consistent answer. If you can set up enough damage by the time they drop their giants (or if they don't draw Naga Sea Witch at all) then you should win.

Conclusion: If you enjoyed the deck and guide, please give me a +1. Feel free to ask me any questions you have. Enjoy smashing your opponents and good luck on ladder!