Hi everyone, I'm Vignu from Italy, and this is the list I used to climb from rank 5 to legend, with a pretty good 66% win rate. Right now the worldwide overall deck win rate is over 56%.

A couple of proofs from the last season... 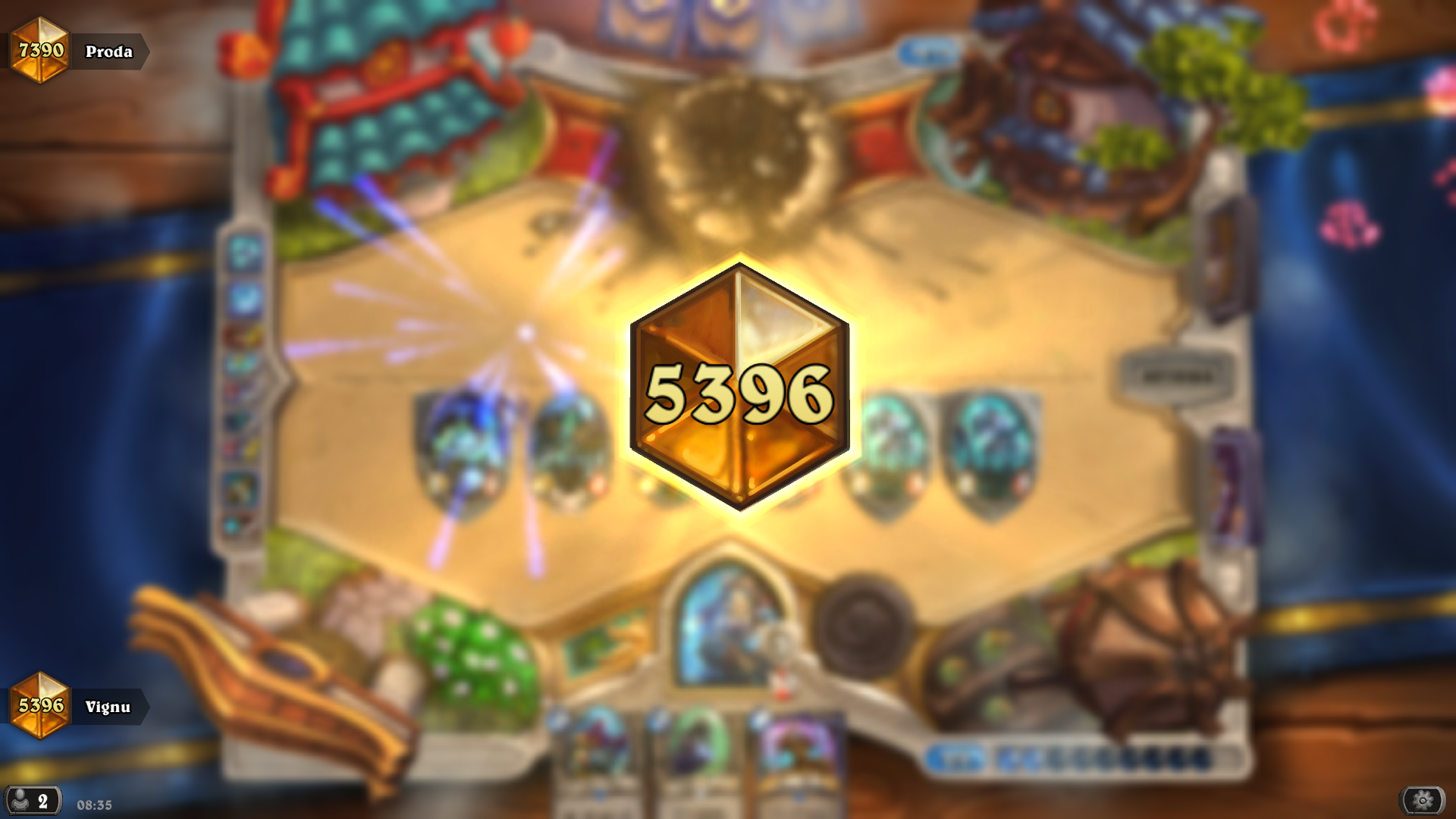 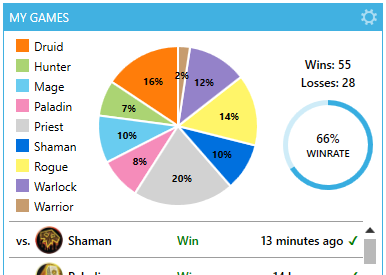 As you can see from the pairings, Priest is not unwinnable and Rogue is a problem.

It's not a new or original deck, but it's a solid one for ranking. It performs really well against all classes and decks, with just one exception the "new" Pirate-Rogue deck that is nearly an unwinnable match-up.

Thanks a lot for the good feedback...  Home page deck! Thank you all!!

For each other card we have to decide to keep a single copy, looking at our hand and opponent. Let's try it...

Evolve. I usually don't keep it but when I hold it is because there are two conditions: 1) I have at least two other cards from the must keep list 2) I'm facing a control deck that will probably play [card]Skulking Geist[/card]. In this situation try to use it before he reach 6 mana, never understimate a 4-5 one-cost-minions army that evolve.

Devolve. Against Druid I often keep it unless my hand has no initiation: it's to valuable against all his buffed minions and is the perfect counter for Spreading Plague. Consider to keep it with a solid hand (better of four cards) against Priest (buffed minions, [card]Shadow Essence[/card]), Warlock (Devolve can destroy a good Zoo-like start), Warrior (Dirty Rat, taunts, pirates), Rogue (Edwin VanCleef, buff) and also Mage (Doomsayer).

Flametongue Totem. Keep it if you have just one of the must have cards.

[card]Mana Tide Totem[/card]. With some solid start ready, I will always ponder if keep it. It's a garantee card draw, costs 3 mana (so we can spend all our resources), discounts our [card]Thing from Below[/card], calls removals...

[card]Thrall, Deathseer[/card]. With Coin and a decent start, I will usually keep our DK against control decks (specially for Anduin). The hope is to find a way to sneak him in play as soon as possible: 3 or 4 little 0/2, 1/1, 1/2 minions can become scary monsters too early for a control deck to handle.

Why only one Bloodlust? Isn't it better than Bonemare?

Well this is a close one, and certainly there can be arguments for both. I know that many Evolve lists play two copies of Bloodlust,but I still prefer to have a single one of each for the following reasons:

1) You can't evolve a Bloodlust, while Bonemare it's an awesone target ("Oh, you're welcome [card]The Lich King[/card]!").

2) Bloodlust requires more minions to be effective, while a single Totem is all what Bonemare needs.

3) Bonemare itself and his effect last more than a turn, giving you more consistency and resiliency (and often a taunt).

Btw, Bloodlust cost (2) less, so it can win the game sooner, but it can also sit usless in your hand. One fun fact about Bloodlust is that it can be either your best or worst top deck, depending on the situation, while Bonemare is less extrem. So, that's all I think about it, try for yourself and let we know your opinions.

Usually no, because [card]Jade Spirit[/card] spawns a "secondary" minion that costs less than 4, so it's a weaker option to evolve. Sure enought if the game is a long one and you wait your others Jade cards before play the Spirit it can be better than [card]Saronite Chain Gang[/card]. But in an aggressive deck you dont want to wait, and cast a turn four Saronite + coin + Evolve is a great play. Least but not last, two taunt minions sometimes save your life.

This is a copy/just another Evolve deck...

When I posted this I wrote "It's not a new or original deck, but it's a solid one for ranking". I just wanted to share the list that bring my third Legend Rank so more easly than before, so that others can try it as well, and that's all...

OP control Priest is unwinnable, what can I do?

Just to clarify: this is certainly an hard match-up but is far from unwinnable, as myself many players stay comfortably over 50% against Priest.

Against Anduin you always want to be very aggressive, having more than one minions in play and close the game asap.

In your opening hand, if you have a good start, consider to keep a Devolve: it counter [card]Northshire Cleric[/card], [card]Golakka Crawler[/card], Radiant Elemental+Power Word: Shield, Doomsayer and eventually a big minion he can sneak in with Barnes or a [card]Shadow Essence[/card], should it be that deck.

The biggest problem with the Priest are his many big removals: [card]Shadow Word: Horror[/card] (maybe comboed with Pint-Size Potion) and [card]Dragonfire Potion[/card]: both are a pain but you can try to play against them using many time your hero power and always keep new gas in hand. It's crucial to balance aggression with a backup plan. Keep track of what removals he had played (remember Shadow Visions too, guess it), try to force him use more of them.

Make a good use of your 4 attack minions and try to have a lot of them (Bonemare battlecry on a 0 attack minion, well placed Flametongue Totem, evolutions, jade...).

Another really important advice is how to use Evolve: specially in this match-up (where you know that a [card]Skulking Geist[/card] will come, sooner or later) it's often a good idea to evolve early, with a decent number of one-two cost minions, in order to push the aggression. For this reason keep an Evolve in your opening hand if your other cards permit it. Always use it, even for just 2-3 minions, if you have the two Evolve in hand. I'd wrote it in the mulligan guide and I repeat here too: keep [card]Thrall, Deathseer[/card] with and a decent start and the Coin.

During late game control the attack valour of your minions: you dont want too many 5+ attack ones before he plays [card]Shadowreaper Anduin[/card], make an intelligent use of [card]Thrall, Deathseer[/card] hero power. This game are usually longer than others so you will eventually draw your match-up killer Bloodlust.

What can I use to replace...

Patches the Pirate? Without him also the two [card]Bloodsail Corsair[/card] become useless, but who cares about them anyway. I can think of many way to fill these 3 spots ([card]Saronite Chain Gang[/card] or Pantry Spider+ 2 Argent Squire, for example) but you will lose the 2-minions-for-1-mana and the deck thinning effect, so your power level will drastically decrease.

Maelstrom Portal?  That's an hard one: portals fit a precise role and in doing so they leave random Evolve targets. There is not a good sostitution, but I'll try a single [card]Lightning Storm[/card], that you can find in many evolve list, and another cheep removal. You can also try [card]Argent Squire[/card] or [card]Golakka Crawler[/card].

[card]Thrall, Deathseer [/card]? I will not play this deck without him. I often keep him in my starting hand if I know my opponent is not aggro. Also what would happens if your opponent plays a Skulking Geist? You will unable to evolve anything in your evolve deck... It's our strongest card and decide when play it or keep it is the hardest choice of my games.

Have a nice day!

6 october edit. I started this season ranking and I want to playtest one variation: due to the massive presence of Golakka Crawler, I cut the Pirate Package from the deck. I'm still unsure on the best sostitutions, actually I'm trying 2x Argent Squire and a single Pantry Spider (double creature and most wanted 3-mana-drop), we'll see if it's work.