I always wanted to make Krul the Unshackled and Mal'Ganis work in a Deck since they are both such powerful and cool cards, especially if you get them on board together. And finally with KofT and Bloodreaver Gul'dan it seems to be the time for Reno Krullock! I made it from 5 to Legend with this Deck in the last Week. Give the Deck some love and ask as many Questions as you want!

If you like it, leave a like here, it helps very much and I will keep updating the Guide!

I also offer coaching for both Wild and Standard. Just send me a message and we will get those ranks rolling =)

I will update this section as much as I can. If you have requests for specific match-ups, just post it in the comments.

I did not play vs many Jade Druids, but you always want to keep the board as clean as possible while putting out your early threats like Mountain Giant, Twilight Drake, Despicable Dreadlord. By turn 8-10 put out your Krul the Unshackled and Bloodreaver Gul'dan to finish them of. They just can't deal with all your big boards you can create out of nothing! Tap as much as you can, while staying at safe HP with Earthen Ring Farseer, Antique Healbot and Reno Jackson, in order to draw your removal and lategame.

Most of the cards are pretty self explanatory, since they are just biS. However i will ad some Questions, that were ask in the comments:

When I created the Deck I was sad, that Bloodreaver Gul'dan replaces Lord Jaraxxus since they are both lategame Cards that replace your Hero. So I just added him and looked if it was reasonable to play both. Surprisingly it was pretty good here are some reasons:

I will keep updating my statistics of Season 42: 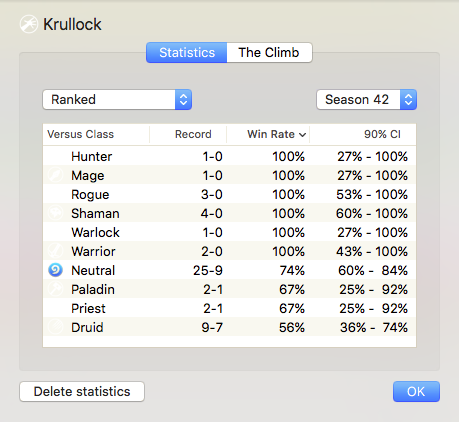 Here is an Video Showcasing the Deck by Kiwiinbacon: