Hello everyone! I'm Spark, Legend player from France. It's been awhile and today I'm sharing yet another guide on Hunter with my latest iteration of N'Zoth Beast Hunter for the KFT expansion. I reached Legend using the deck, along with some Demon Handlock and Murloc Paladin games here and there to playtest the decks, scoring a solid 64% winrate. You can find my current KFT decklists with deck codes in this neat album: Spark's KFT Decks 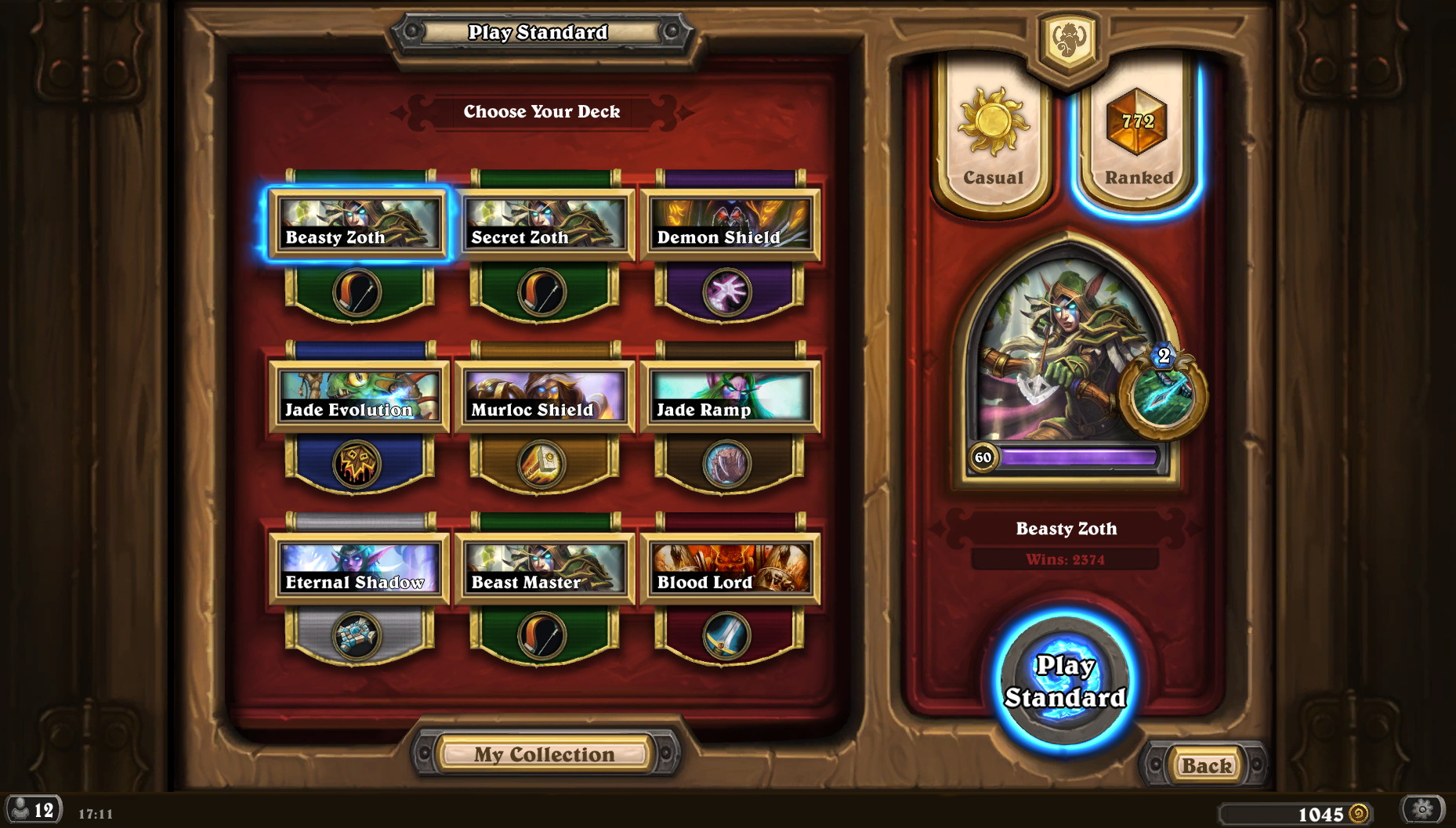 Here are my winrates with the deck:

Now that the meta has stabilized, I feel like the deck has a harder time performing consistently. It is somewhat vulnerable to more aggressive decks, like the popular Token Druid, but remains pretty solid against slower decks, like the even more popular Jade Druid. If you manage to pilot it properly, it is still a decent pick to climb the ladder while having some good times with the Deathrattle synergies and the Build-A-Beast hero power from Deathstalker Rexxar.

Alleycat, Kindly Grandmother, Crackling Razormaw, Animal Companion, Rat Pack, Houndmaster and Savannah Highmane – Staple Beasts that you generally want to play on curve. Those are your bread and butter minions to fight for board control and pressure your opponent throughout the game.

Kill Command and Eaglehorn Bow – Control tools to keep your momentum when ahead or try and comeback when behind. Eaglehorn Bow is very useful in the midgame and can add some face damage while Kill Command can deal with mid-sized body or burst your opponent for lethal damage.

Mistress of Mixtures – It might seem conter-intuitive to run this card in a Hunter deck but it is actually very useful in this one because the gameplan is much slower than usual. As evoked earlier, the deck is vulnerable to Aggro decks, so it's pretty much a mandatory inclusion to fight for board control in the early game. The 2/2 body helps a lot dealing with aggressive decks and the healing effect can help you survive smorc strategies. Against slower decks, it is still useful to have an early board presence and deal with their first few minions. In some rare scenarios, you might want to consider holding on it if you're close to lethal and slowly getting out-valued by your opponent.

Loot Hoarder – As the deck runs a slower and more value-oriented playstyle, the draw mechanism helps a lot fishing for your late game threats while the 2/1 body is still a decent way of contesting the board early on.

Barnes – Considering the amount of deathrattle minions in the deck, Barnes feels like a natural inclusion. The Lich King is obviously another great target and Corpse Widow can be a good one as well if you have a deathrattle to play right away. The 3/4 and 1/1 bodies are already pretty decent for a mid game play anyway. Replaced with Stitched Tracker to get the small body earlier while still generating value.

Arfus – This one feels a bit slow as the 2/2 body isn't so good at contesting the board but it still has the Beast status to trigger the synergies you need and the deathrattle can be life-saving as the Death Knight cards are generally pretty powerful. Also note that Army of the Dead can be an incredibly powerful up-tempo play compared to other decks running The Lich King. Replaced with Stitched Tracker to get the small body earlier while still generating value.

Corpse Widow – This card synergizes extremelly well with the deck while coming in with very solid 4/6 Beast body. You can combine it with Kindly Grandmother and Loot Hoarder on turn 5 but you shouldn't wait for this scenario to drop it as the body itself is already pretty pressuring. The threat of getting a 4-cost Savannah Highmane will frighten your opponent and it can potentially open up a free way for an unswered turn 6 Savannah Highmane if your opponent wastes resources and tempo on Corpse Widow.

N'Zoth, the Corruptor – N'Zoth gives you the last breath you need to beat Control decks if the game extends for too long. Reviving Savannah Highmane is obviously huge and the rest of your sticky deathrattle minions can swarm the board for a quick lethal. Note that it can also revive some powerful Zombeast you built previously.

Deathstalker Rexxar – This card fits the slower playstyle perfectly as the hero power will give you infinite value to make sure you can have a powerful play each turn. The Battlecry is also very useful to deal with swarm strategies or unfavorable board states as Hunter lacks board clear options. You generally don't want to play too early if you can keep up your momentum instead as it doesn't generate much tempo when it comes to play, aside from the Battlecry. So generally you want to drop it when there is a good spot for the Battlecry, as an answer to Living Mana for example, and then use the hero power to out-value your opponent turn after turn.

The Lich King – Another nice late game threats that can generate value with the Death Knight cards. The fact that it has taunt also comes in handy as you don't have many taunts to wall off aggression and prevent lethal in the late game aside from Houndmaster and the potential Zombeasts you can have.

The Black Knight – An incredibly strong tech card in the current meta as most of the decks are playing valuable taunts and/or The Lich King at the moment. It basically acts as a Deadly Shot against lonely taunts while generating tempo with the 4/5 body. I honestly feel like it is a very important tool to have in order to beat Jade Druid and Murloc Paladin. If you don't have it and don't want to craft it, Spellbreaker is a fine replacement but you can also consider one of the cards listed below ;)

If you're not a big fan of the slower playstyle of the deck or facing too many aggressive decks, or simply missing some of the cards, you can consider some of the swaps below. Hungry Crab and Golakka Crawler are especially useful if you face too many Murloc Paladin and Pirate Warrior while Bonemare is a very strong card overall if you want to go for a straightforward Midrange gameplan.

As always, Hunter revolves on getting a good curve to fight for board control and keep up the momentum until the late game. You desperately need to mulligan aggressively for 1-drops and 2-drops, especially against aggressive decks. You can go for some 3-drops as well against slower decks or if you have The Coin, or simply if your hand is good already. I still tend to keep one 3-drop against faster decks when I have to re-roll the rest of my hand, just to make sure I can at least drop something on turn 3.

I hope you'll enjoy the deck as much as I do and maybe it can help you reach Legend this season while having some good fun. Don't forget to show your support by upvoting the deck if you liked and don't hesitate to discuss about it or ask any question in the comment section below ;)