I have always considered theorycrafting and deckbuilding an important part of the game itself and never enjoyed spamming netdecked top tier decks.

I'm a huge fan of Rogue and I like to make some innovative decks or improve almost unknown archetype. Here is a homebrew with a very in-depth guide I wrote last year. The deck was already based on one of my favorite cards ever: Shadowcaster.

Finding a cool rogue deck with KFT has been a struggle.
The cards Rogue got are trash so I decided to look if amongst the neutral cards there wasn't something that would be playable.

I knew Miracle wouldn't change and I was right.
The best miracle rogue lists are still Un'Goro lists — the DK is bad, don't play it.
I tried Jade Rogue (where Valeera the Hollow is ok) but it was still a meh deck.

So I took a look into one deck that already got me to legend once: Elemental Rogue.

My list back then wasn't refined, but I knew the deck had some potential.

J4CKIECHAN tried Prince Keleseth in it and I have to agree that the card was fitting perfectly well. I'm sad I did not get the idea before he did. So I decided to give it a try, but building my own list; even if the design space is reduced by the Elemental set of cards.

…And it went so well that I got a really easy legend despite druid being so powerful. Between rank3 and legend i still had a steady 75% winrate. Before that, I did not track my stats but I can assure you it was even higher.
I have all the legend and stats proof you could ask (here are some : https://twitter.com/AlpharaonHS/status/899046963965968384)

KiwiiNBacon made a showcase video for the deck.
I'm really thankful to him! the two games are vs. Jade Druid at rank5; it's neat, you should watch it!

Furo made this really great video.
Really clear, the explanations are very very good, I highly recommend you to watch!

Oliech, Belgian streamer for ArmaTVHS (but he's also the Weasel guy from the HGG), gave me his agreement to include in the guide his video showcasing a similar deck he played after a suggestion I made on twitter.

Hitting an Elemental with Mimic Pod solves any problem you could have at a certain point for activating Elemental battlecries.
Fan of Knives could be good as well; and I'm currently trying with Xaril, Poisoned Mind instead.

Xaril is very neat card in a deck not playing many spells. The Toxins are excellent as they are able to trigger combos or give back a battlecry.

The card is good but not good enough to be played as a 2-of in this kind of deck.
If you want to play two copies you would have to play 2x Southsea Deckhand and make a few changes on the structure of the deck (making it more aggressive).

I'm not sure I should have to explain why Si:7 is good in a tempo rogue.
This card is insane in some matchups like Hunter, Shaman or Aggro druid.

My favourite card in the deck (and probably in general).
The battlecries you obtain are often insanely good value and tempo for 1-mana.
The card is sometimes mediocre when your early draw is cluncky but it's very rare and the moments the card shines are so overwhelming that I would not even take the moments it underperforms into consideration.

This card is imho a little bit harder to trigger than it is in a miracle list.

Nevertheless, it's still extremely good, especially in a deck which is looking for the control of the board. Bitter Tide Hydra being played in aggro decks makes this card even more important.

One of the strongest cards in the deck. Fits perfectly well in Rogue.

Comes out as a 2/2 with Keleseth, this card is necessary to keep aggro/mid decks in check.

This card is so strong. Drawing it early in the game considerably increases your winrate.
The problem with Battlecry minions is that they are (logically) understated. And most of the competitive minions are actually often played for their battlecry/deathrattle… and the downside of this is that we aren't used to deal with averagely stated or overstated minions in general. Playing a 5/6 on 5 may seem bad. Take Servant of Kalimos after It's Pit Fighter, right? But it's a Pit Fighter that has no value downside!

Strong body, not sure if strong enough to be played as a 2-of.
Its main interest is that it allows you to curve into Servant of Kalimos more consistantly.
It's the Chillwind Yeti of the deck as Tar Creeper is the Sen'jin Shieldmasta.

Theorically overpowered, but uneasy to curve.

Nevertheless, I would not advise you to cut it completely. Having a third midgame taunt is very important in some matchups. Also, I really like the fact that it protects minions you would probably like to Shadowcast.

It's important to have a solid turn5 like this one (Shadowcaster & Vilespine Slayer aren't turn5 most of the time).
What is good with SoK is that you play it on 5, you then get another elemental that you can play on 6 to curve into Blazecaller.
Getting Servant of Kalimos out of Servant of Kalimos is one of the most satisfying feelings; getting Blazecaller, Ozruk or Stormwatcher isn't bad either!

[meta tech card] Insanely strong in the current meta. The Lich King slayer? More often it's Primordial Drake, Bonemare'd minions or that 3/6 elephant that summons a Jade Golem. This card is just very very good and should not be cut for any reason other than not having it.

Should I really explain why a better Firelands Portal is good?

The tips I give here may seem redundant or sometimes obvious but I'm pretty sure some advices are helpful!

The problem with Druid is that it has too many viable archetypes.
Tar Creeper for instance is excellent vs. aggro but it's not aggressive enough versus Jade.
If your hand is already good enough, keep it, but if it is not, you should probably not keep it: Jade is more popular.

You are looking for these cards:
Fire Fly, Swashburglar, Southsea Deckhand, Prince Keleseth SI:7 Agent.
Always keep Backstab if you have any of those cards.

Swashburglar, Keleseth, SI:7 Agent, 1 Backstab, Fire Fly. Only keep one 1-drop if you have two proposed, and keep Swashburglar over Fire Fly.

Priest mainly plays 3 minions: Cleric (1/2), Radiant (2/3) and Glimmerroot (3/3). Swashburglar/Patches/Daggers allows you alone to deal with any early game minion Priest has, and that is important because it's a board-centric deck.

This section won't be long because the deck does not have much room for that.
Core cards:
Prince Keleseth
Shadowcaster
Vilespine Slayer
Patches the Pirate
All elementals except for Grave Shambler

Cards you can change:
Xaril, Poisoned Mind or Mimic Pod
The Black Knight
Plague Scientist, Grave Shambler, Southsea Deckhand (but those are commons so…)
Tol'vir Stoneshaper

If you are missing some specific cards, tell me in the comments, and i'll try to find alternatives for you.

My score is indicated between parentheses.

Please notice that I played more games than that with the deck but that I only began keeping track of my games after rank3.
My winrate before rank3 was easily around 80% and that's what convinced me to make a guide for the deck.
The vast majority of the games are at Legend rank between rank 1000 and 2500 (we have over 12.000 legend players on EU this month so it's not as bad as it may seem).
Keep in mind that, even with some decks allowing unskilled players to get legend, the average level of the legend player is still probably better than the average level of the non-legend player.
Also, my sample is of a fair size (almost 100 games) and I feel like the class representation is good (39 druids, 13 Paladins, 9 Priests, …) 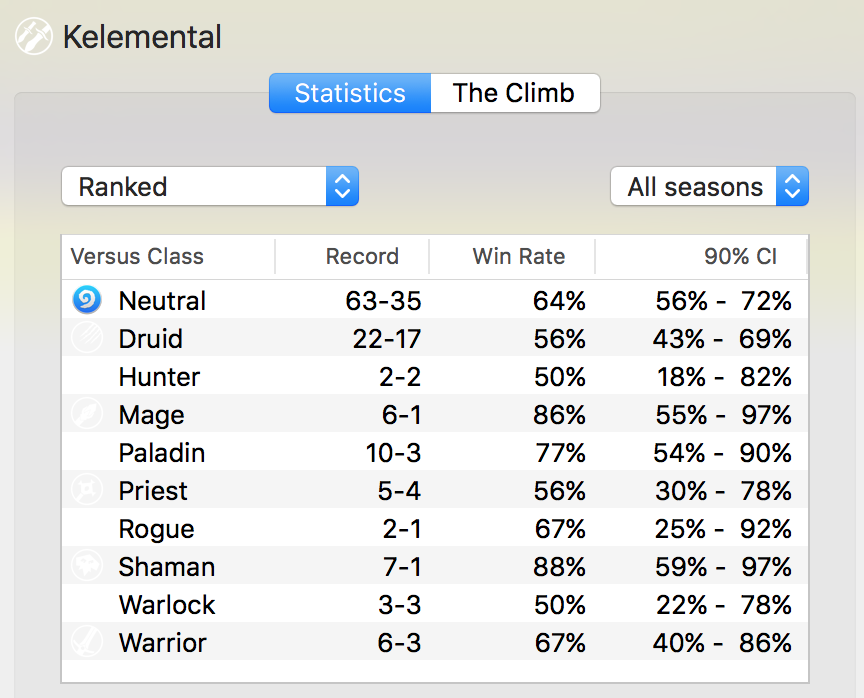 The strategy for this matchup is pretty simple: try to clear the board as well as you can and try to survive until midgame. Killing a Bittertide Hydra with Plague Scientist (if you play it) or Vilespine Slayer often means you'll win. The big threat they have for this deck is Living Mana. Taunts help quite well against that card, you can try to get a Baron Geddon out of a Servant of Kalimos.

Try to be quite aggressive, let him trade most of the times.
The Black Knight, Vilespine Slayer and Shadowcaster are MVP.

Games vs. Hunter make me ill at ease. If they draw well they have the advantage from the sole power level of Savannah Highmane, and because they can burst us pretty well. But I haven't met enough Hunters to be sure.

Try not to waste your time dealing with his minions. Your life total does not matter much. Just try making the most damage oriented plays and it should be fine. The only time I lost the matchup he got the combo & the quest completed in his first 15 cards.

It really depends on the mage's draw. Not much to say.

Try to sequence well your early game plays and then you'll be able to beat it pretty easily in the midgame. The one card that made me lose the matchup, apart from drawing horribly was Finja.

Because they'll always have everything they need to rekt you.

Try not to overcommit whilst still be threatening. Baiting is really a difficult skill to get.

The one time I lost the matchup I easily got one of the unluckiest draw you can get with this deck and he got a good early Evolve.

I was convinced the matchup was favourable but the handlock version that is getting more popular isn't really good news for this deck. Try to pay attention to Defile.

Yep. But I feel like i got pretty lucky in general for that matchup. I'd say it's slightly favourable since Pirate Warrior is obviously overpowered.

except if you draw horribly (happened to me twice, so 2 of the loss are actually vs. Non-Pirate Warriors).

Thanks for the support. I've uploaded a gameplay video on YouTube I recorded when I was at rank3. I'm sorry I muted my voice because my (absence of) mic makes it really bad to listen to. I'll add some subtitles to comment on my plays instead!

EDIT2: Front page! I'll try to do this as soon as possible!

If you have some ideas, let me know :)

Also: I dont care about the points, but I don't think it is worthy enough to spent dozens of hours on a guide none would read, everyone may understand this.

EDIT3: I felt like a match-ups guide was missing so I added it!