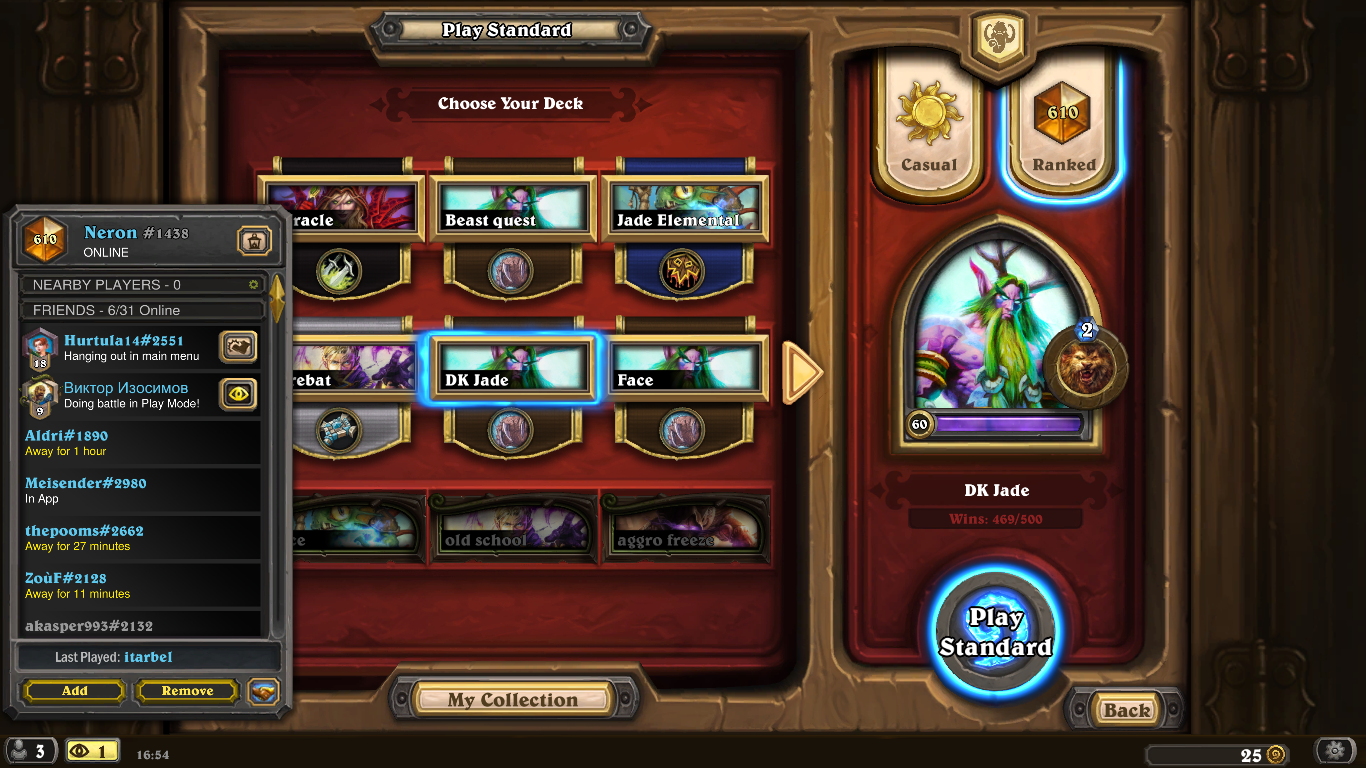 This is the jade druid I reached legend in the first 3 days of the expansion. 68% overall winrate; 91% winrate vs decks with Skulking Geist.  I literally have a better winrate against control priests who run Skulking Geist than to those who don't

This list was inspired by Firebat's 12 win "Tempo Jade Druid" he used in MSG Heroic brawl. The idea is to play all your idols for dudes and use your bigger jade size and ramped out minions to pressure control opponents down, rather than shuffling and cycling with auctioneers

When using this list, you'll often be ramping with early Nourish.Ultimate Infestation, second Nourish and The Curator is enough draw to carry since you're not spamming your deck with 1 mana idols. Never shuffle idols. The only time I did so was when idol was one of the last cards in the deck and I had leftover draw in hand

Hadronox is a fun card. Against fast non-shaman decks, play it out when if you have time. If they threaten lethal the following turn, you can trade or trade + wrath/ultimate infestation on it to hold the door. Against value/control decks you can play it after lich king to spawn a second copy.  It's also great against doomsayer!

For the Druid DK hero, you usually want the 1/5 taunts. 1/2s are too easily removed by most meta decks but if you matchup against a deck that doesn't pack answers, you want the spiders for sure. 1/2s can also get potion of madness'd. The best part of the hero is the free 3 damage removal. Burst decks are rare, so feel free to use your face on everything

Aggro decks are experimenting with Skellemancer these days. I haven't been bested by any yet. Just ignore it and hold the door with taunts

There are always exceptions. If you have a clean ramp into minion curve in your opening, keep the minions as well. Eg Wild Growth, Innervate, Jade Behemoth is a keep because you can turn 2 Growth into turn 3 vate Behemoth

Keep wraths if aggro druid is popular in your ladder position

We are favored against the mirror due to out tech choices. Just curvestone and try to favor playing jade minions over stat minions. Favor developing minions over removing opponent minions.  Play around primordial drake as they always run 2 copies

Aggro druid is a bad matchup. With no more azure drake, we have issues dealing with 2 hp things. The key card in this matchup is primordial drake. Ramp it out against some living mana tokens or 1/2s and the game should be sealed. If you have a drake, focus on ramping it, otherwise remove the board aggressively to prevent buff blowouts.  Keep wrath until you're sure the opponent doesn't have a flappy bird

Plague druid is a slightly unfavored matchup. I was losing a lot early on because I didn't their gameplan and lists. After I figured them out, the matchup was much easier. You play the same way as vs jade druid with a few differences.  You don't need to play around drake. Make preemptive bumps into their tanky taunts to play around buffs. Play around spreading plague by trading away small junk minions and keeping big minions healthy. Always trade when you can

Just remove their stuff as efficiently as possible with swipes, wraths and drakes. Ez game. Trade and hold the door with taunts

In general, try to keep an answer for doomsayer in hand. This can be two part removal or Hadronox. Some value magi don't run doomsayer. You can ID these if they don't play novas and blizzards

Vs Lich value mage, we are favored. Make sure to play any idols in hand before turn 6 to play around geist. Just ramp into big minions and play on curve. They usually run out of removal for your stuff and their minions are outclassed by yours

Vs Exodia we are very unfavored. The plan is to SMorc face. Charge with druid of the claw; ignore their garbage minions as chip face damage on you don't matter. Mill their acolytes if they give you the chance and remember that fatigue damage pierces ice block. This list is very bursty. If you can pop ice block once, you can rely on burst rather than minions to pop again or finish them off. Thus, you can let your minions get cleared by doomsayers if they're under 6HP

Vs control we are very favored. Play around geist as always. Don't overload your board with big jades. He has "clears" in 2x equality, 1x sunkeeper (possibly more from 1/4 discovery turtle). Try to jebait those out before going all in and keep track of his discovered taunts.

Vs murlocs, we're unfavored. Just play it like aggro druid. Some lists also run Deathwing for some reason

Play it like any other control match and play around dragonfire.  This matchup can be surprisingly bad if the priest has the right list. Specifically, lists with Medivh + MC or lists that spam obsidian statue

Oh, and old innerfire/divine spirit or silence priest is still next to unwinable. Thankfully people rather try new archtypes

Rogues is largely unrefined this early in ungoro. I can't seem to define any common archtypes. Just play big things and focus on jades. Your answer to arcane giant is trades with jades

We are very favored against control.  Just play it like any other control deck. They tend to get themselves quite low and get rekt in a surprise burst.  If you're sneaky, you can punch them down in range without setting off alarms

I haven't seen any zoo but I hear it's popular

Vs all shaman we are slightly favored. Generally save removal for 0/3s. Try to clear as much garbage as possible before their turn 5 bloodlust or put up taunts. Try to play around hex by favoring many small minions over 1 big minion. Lightning storm is not effective against us anyway

Vs Pirates we are very favored. The original firebat list was made to combat pirate warrior so naturally, we should do fine unless they nut draw. Generally favor removing their crap before playing taunts unless you have a lot of taunts in hand or are in danger of dying. Make sure to count their damage every turn and their burst potential to play around it

Vs DK warrior I think I did pretty bad. Mostly because I saw very few of them I didn't know what to play around. I only saw 1 or 2 of them so I still don't really have a good idea