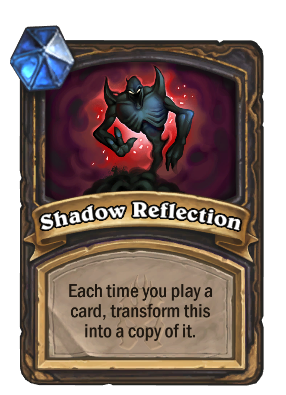 Miracle rogue is back thanks to one good rogue card (let's face it.. really the one and only) in the new expansion.  REMEMBER TO SUB/TECH FOR YOUR META.  READ THE SUB/TECH SECTION BELOW!

Thanks for all the support guys! Let's keep this crazy fun deck going!

Takes a good bit of thought and skill to play, if you've played miracle before you'll be right at home.  The deck plays like your old school miracle rogue with a different finisher.  You keep control of the board until you can get your Gadgetzan Auctioneer out and draw, then push into Valeera the Hollow late game and copy your Arcane Giants for super cheap and make two nice fat Edwin VanCleefs. Shadow Reflections work amazingly well with a lot of the random class cards you'll be getting at the same time.

I'll have some new vids up soon for meta match ups.  Also if you want to see some more professional play check out the vids below!

As usual more up votes, more detail AND VIDS!

vs. current meta (will get updated over the next couple weeks as the meta develops)
50: 'Most' meta match up videos w/ detailed play style explanations  (more vids coming soon!)

Consider keeping Eviscerate, Shaku, the Collector, Razorpetal Lasher, Bloodmage Thalnos (if you have early spell synergy.)  The only way I keep Edwin VanCleef is if I have exactly the right mix of Counterfeit Coin (or The Coin,) Backstab and Swashburglar.

Comments/questions welcomed and will be answered below