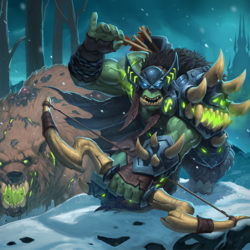 This deck is based on the idea that Deathstalker Rexxar can get you through the late-game. So, if you have enough value to beat slow decks, you need to be fast enough to beat fast decks. That means we need to focus on staying alive and getting on the board ASAP. This is done with the usual 1-, 2- and 3-drops and by curving out, which is what Hunter should always try to do.

The other aim is to dig up the body of the late Rexxar. Tracking and the Murloc package are great for this. There is not really a combo in this deck, and the synergy is quite forgiving. Therefore, most cards are very much expendable. This makes Tracking right at home. Finja, the Flying Star can help with thinning out the deck and regaining board control or finishing the game. It might, however, be too inconsistent. This needs to be tested.

The murloc package might prove to be too weak or inconsistent. Possible replacements are tech cards like Hungry Crab and Golakka Crawler or maybe Flare, but that completely depends on the meta. Otherwise, you should aim to add more taunts (i.e. Nesting Roc) in order to survive longer, because a possible problem might be opponents ignoring your minions and trying to finish you off before you can get going with your value game. This might problem might be somewhat solve with the addition of Saronite Chain Gang, though.

I will of course also test out Knuckles and Swamp King Dred, as they are awesome to play. Also, there might be an actual spot for them in this deck, as it aims to be comfortable in mid- to late-game. However, I think that the most important thing is to not lose board control before that. Hunter is terrible at playing reactively, so the early game has to be won.

I will definitely try out N'Zoth, the Corruptor. Probably you can't afford to run a card this expensive, but the possibilities are endless:

Every time you build-a-beast, you have a 32% chance to get a deathrattle. Then, you have 46% chance to get a taunt option, 33% to get stealth and 18% to get either windfury or charge. Of course, you will want to be reviving minions that immediately effect the board state. This means you are looking mostly for charge and taunt. There is around a 49% chance to get one of those, combined with the 32% chance to get deathrattle, that makes for about 1/6 zombeasts given you a great minion to revive with N'Zoth, the Corruptor.

Some people in the chat also had some good suggestions:

As suggested by GabrielS0, Prince Valanar could prove to be more useful than Houndmaster. This has to be tested, because Houndmaster might offer more flexibility in combination with the zombeasts. Valanar could offer some healing, though, which could be much needed in some matchups. It is also a better card to get back on the board. I expect that Saronite Chain Gang adds more consistency than just the one Valanar

Dieseledge pointed out that Harrison Jones can be a really good tech card if many weapons are involved in the meta. He can help with the card draw aspect. He might, however be too slow. If you play against weapon classes consistently and can keep up the pace, you should try this out.

I think most of the other new hunter cards are too clunky or too situational. Saronite Chain Gang might be a good addition, though:

This deck aims to be consistent, by winning early game and having Deathstalker Rexxar to fall back on later on. Consistency is the key.

UPDATE: I put Saronite Chain Gang in instead of Stitched Tracker and Nesting Roc, because this card might be pretty good in this deck:

I'm curious to hear any suggestions, so please leave your comments. (and maybe a plus, if you like the idea behind the deck)