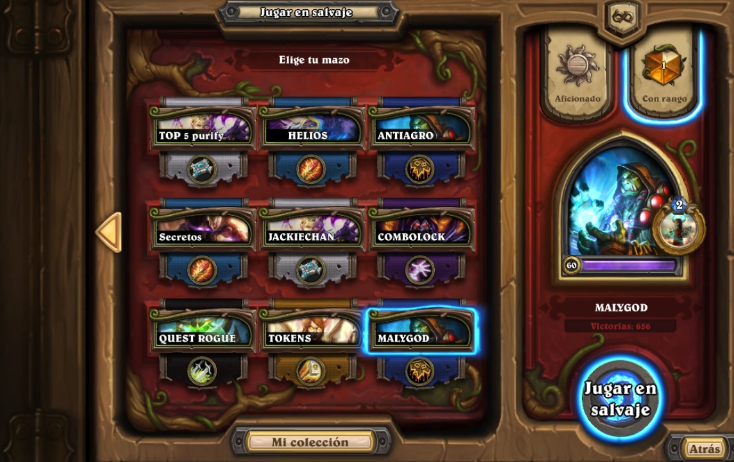 Hello everyone again. I've been making a series of changes after playing the deck in legend for time. The changes are the following (-2 Hex + 2 Finders Keepers. - Emperor Thaurissan + Ancestor's Call.)

I have realized that in this way Barnes charges much more value and we honestly do not need to thaurisan in the deck if we play 2 Ancestor's Call, given that you usually have Malygos [/card](no call or [card]barnes without Malygos ) to this way the combo is produced a lot faster, the cost 1 can give you as much areas as draw. Also some feral spirit or some weapon that serves both to defend you and to take the right life to kill him completely. I hope they serve you since i believe that this way the deck is improve both quickly and defensively (making it more viable aMalygos or Hallazeal the Ascendedfrom Barnes)

Then I'll leave you a little guide of the mulligan.

Againts agro druid , token pala or pirate warrior we dont really need to make them an otk only survive , because if you stay they will leave for sure when they have no board and cant kill you. We will begin with Healing Wave , lighting bolt , Lightning Storm , Maelstrom Portal or Devolve,Crackle .

Individual damage is important to kill minion as pirate cannon or some beast as chicken in the case of agro druid.

Devolve will be very useful to combat possible berseker or living mana.

In the case of playing againts control we will be essentially draw and some type of aoe, barnes is too good too, also healing wave is good too. We are not in a hurry in this matchup because we will otk them , so try to use you resources smartly.

Finally i am here for any type of question that i can answer,i hope the guide can help you a little, have fun and good day.