I stumbled upon the following decklist from SSANDSTORM on reddit and found IMMEDIATE success with it on ladder, shooting up from rank 5 to legend in just a couple hours going 19-0 in the process. You can find his thoughts on the deck HERE. 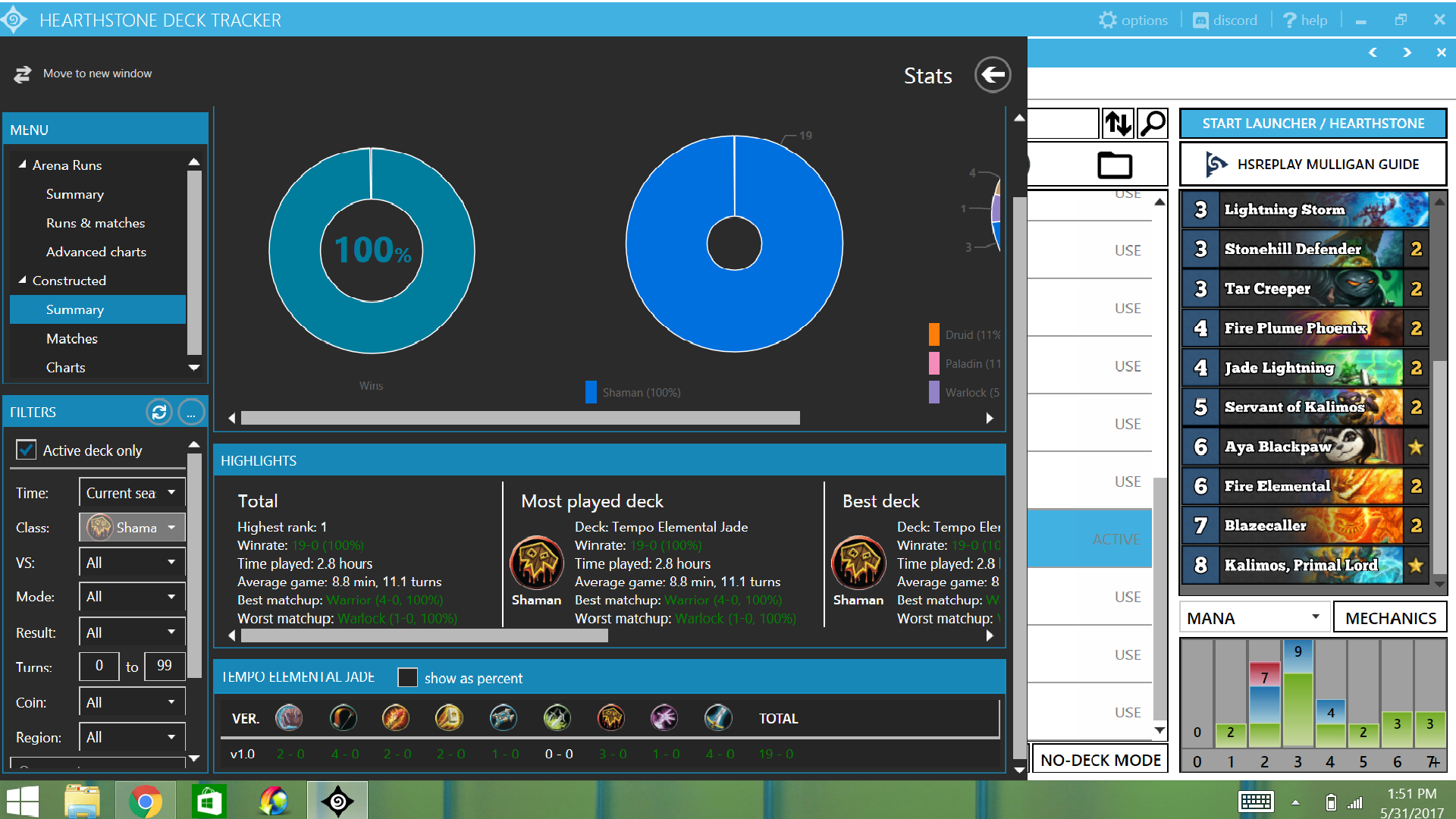 Imo these are the key strengths that make it very good in the current ladder meta.

First, it fends off aggro very well. Your 3 mana taunts, jade claws/lightning, maelstrom portal, and devolve are very strong against aggro. You have the tools to survive their initial onslaught and then flip the board on them in the midgame.

Second, it has enough value to compete with control. Stonehill defender was initially most popular in warrior and paladin, but imo it shines brightest in shaman. You have 5 powerful class taunts to pick from, plus there are plenty of decent neutrals that fit the game plan of this deck. Between stonehill and servant, you have multiple shots at adding extra legendaries like white eyes, al' akir, and kalimos. Sprinkle in the added power of aya with the jade package and we definitely have some value to fight control with.

There is only one copy of devolve and lightning storm and no copies of cards like bloodlust, volcano, or spirit echo. The problem with tech cards in this deck is that they are too situational and they interrupt our game plan of playing elementals on curve. Remember that the key to unleashing the full potential of elementals is on playing one each turn.

As for the lack of aoe, double portals and one storm (plus kalimos) I have found to be just enough. The list has so many cards that create positive tempo swings by simultaneously removing their stuff while developing our own board (and also being able to go face when necessary). While I think volcano is an exceptional card, I don't believe it is right for this tempo based deck. Volcano thrives in a more control-based deck where you are aiming to prolong the game and out value your opponent.

You'll also notice no mana tide totems. This is a card that in the past I just auto-included because I assumed it was always necessary (especially since azure drake got retired). However, with double stonehill and servant, I found that this deck has just enough refill to fulfill its gameplan.

This theme of minimal tech is highlighted in the 4 mana slot where we see fire plume phoenix as opposed to tol'vir stoneshaper or jinyu waterspeaker. We have so much defense in the early game that I feel tol'vir is overkill. Don't get me wrong he's a solid choice if you are missing a mid-game card, but the phoenix just better fits the theme of this deck of playing elementals each turn and playing cards that deal damage while developing our board. If you're seeing a lot of freeze mage then jinyu or spirit echo can be considered.

You're generally looking for the best possible opening curve. Fire fly, jade claws, portal, and a 3 mana taunt. If you have the coin you can keep two 3-drops and if you have something like tar creeper, phoenix, servant, i would consider keeping that as well. Also keep flame tongue totem if you have fire fly or jade claws. In some matchups consider coining out both 1 drops if you have the flametongue to follow up.

Against mage keep the coin for counterspell and use your 1 drops for mirror entity. Don't hesitate to hit the mana wrym preemptively to setup the kill the following turn. Don't let that guy get out of control. Ideally you want to save kalimos to heal your face out of burn range, but don't hesitate to drop him to clear a dangerous board or to push for lethal. When they play Medivh, consider setting up for lethal and pushing face as opposed to trading his minions because you will never be able to keep up with the huge tempo swings of atiesh. Of course if it's an obvious value trade take it, but definitely keep in mind the state of the game and how your win condition is looking.

Against druid add devolve and lightning storm to your standard mulligan. Target their beasts first when removing their minions and don't forget that after you hex something, the frog is a beast that has synergy with mark of y'sharj. If you have devolve, try to save it for living mana because it basically auto-wins, but don't hesitate to use it if their board gets out of control early. With stonehill i'd probably opt for the card I can play sooner rather than taking a big drop because you might not survive long enough to play it.

If it's jade druid, you need to switch gears and go aggro because we can't win in the long game. Trade too much and you give them time to outvalue you. Use hex/devolve on aya or to get through taunts to go face to setup lethal.

Against paladin I also add devolve and lightning storm to the standard mulligan. Try to remove their murlocs asap before they snowball out of control. Consider gentle megasaur post turn 4 and spikeridged steed post turn 6. Save at least one hex for tirion, but other hexable targets are rag and spikeridged steed. I would rather use devolve on steed/warleader as opposed to hex because devolve on tirion and rag still leaves you with a 7 drop. Don't overextend if they have a full hand and get wrecked by equality pyro or consecrate. And also keep in mind their secrets. Play around "get down" and getaway kodo by killing their low value minions first. We have so many cards that deal damage with pings that can bypass taunts that make this very doable.

Against warrior I always mulligan for pirates because it is so unforgiving. I would much rather play tar creeper on 3 than stonehill because if they have a good draw, stonehill might be too much of a tempo loss to recover from (unless you discover earth elemental). When he is pushing for lethal, consider making a weaker tempo play if it allows you to hero power and roll for a taunt totem. Keep in mind that you can only have 1 of each totem up at a time, so definitely trade your other tokens over your totems to give you the best % shot at rolling a taunt totem. Keep in mind that mortal strike deals 6 when he is below 12 health, so keep him above that to prevent him from topdecking lethal against you.

Against taunt warrior mulligan for the most aggressive possible curve. Be careful about hero powering in the mid game if you have a couple big minions on board because it gives him a better brawl. For example if you have a servant, fire ele, and blaze caller on board i would probably pass on the hero power. When trading on board, try to protect the health of your bigger minions to play around primordial drake. Once sulfuras is activated go as wide as possible. Kalimos fill the board with 1/1s is the pick unless you are close to lethal since we have so many cards capable of pinging face.

Against shaman  add devolve and storm to your standard mulligan. 90% of the matchups are currently the token variant so keep in mind bloodlust and evolve.

Against rogue add devolve and hex to the standard mulligan but prepare for quest rogue. This is a terrible matchup but not completely unwinnable. Hex/devolve igneous elemental and push as much damage to the face as possible, but clear their board if they are about to complete the quest. Discovering earth elemental from stonehill is huge for this matchup.

Against miracle rogue we are favored as we have hex and devolve to deal with edwin/sherazin/arcane giant, and we also have the tools to out tempo them.

Against priest you have to be a little more careful with your early plays. If they play cleric on turn 1 i might not totem because all it does is give them a free card draw (and we don't run thing from below). I like coining out fire fly and flame elemental if i have flametongue or jade claws to back it up because it deals with the cleric pretty well. I would keep devolve/hex in case it's silence priest or to deal with early health buffs that get out of control. Keep in mind that inner fire is run in not only silence priest but dragons and elementals as well. Also keep in mind how flame tongue affects your minions, for example buffing a hot spring guardian to 4 attack keeps him safe from their spells. Always be on the lookout for how you can be ruined by potion of madness, holy nova, dragon fire potion, etc