5_18_2017 EDIT: OK so still climbing, but I haven't been playing much. Currently rank 6 and facing a LOT of mages! I did tech in an Eater of Secrets (-1 Jade Lightning) for the mass amount of Secret Mages currently flooding the ladder at ranks 8-6. Just an FYI folks :) !

EDITS: OK, so I've started the climb for Season 38 with this deck. So far I am rank 10 and climbing. I haven't really put in much time so far (around 3 hours of play) but I've only lost around 3 times from rank 16 to 10. I have made 1 permanent change to the deck, I added +1 Devolve and -1 Mana Tide Totem. Devolve is just too good against Aggro Druid and Murloc Palaldin. It also can help as a taunt removal against Taunt Warrior to push in the (hopefully) final damage with Bloodlust. Good luck all!

This is my first time legend deck. And I must say that it is pretty tight! It is a great midrange deck that does well against all classes. Don't get me wrong, it is an Elemental Shaman deck and they kind of build themselves, but since I got to Legend I thought I'd post it. 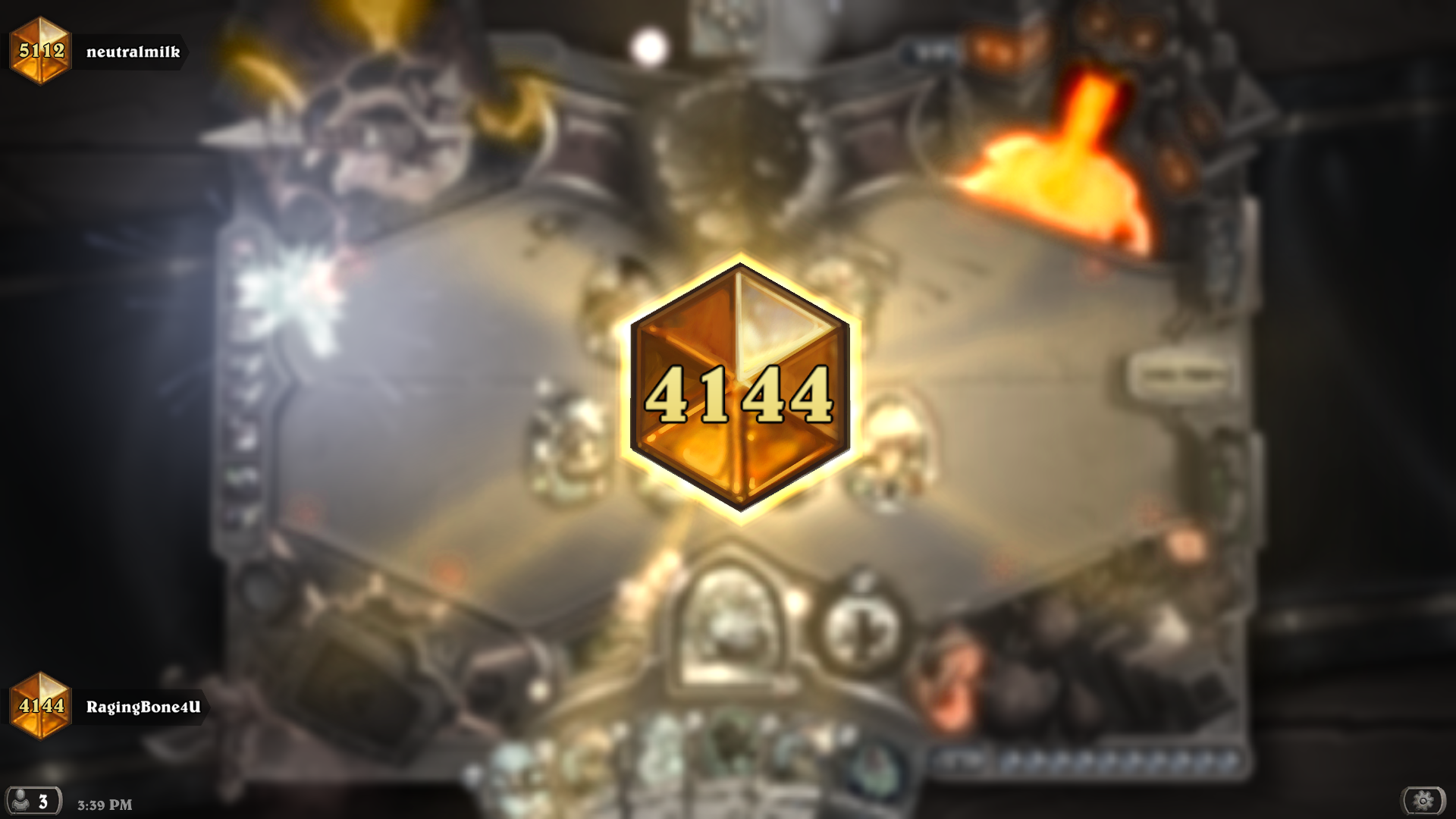 By the numbers, this is how my deck performed against:

Some of the numbers are spot on while others should definately be WAY higher. This deck is GREAT against Hunter. The times I lost were do to some rough draws. Fire Fly is soooooo good against Hunter, Jade Claws op, and obviously Portal is amazing. If you don't have at least one of those it makes the matchup much more difficult. The Warrior and Rogue numbers should also have been a bit better. Taunt Warrior is tough, but with the same Hunter draw stated above, you should wreck Pirate Warrior. Against Rogue, it's basically 50/50. For Quest Rogue, if you get a good early draw (especially Flametongue Totem and Fire Fly), you can easily win. For Miracle, Hex can be GG!

OK, decided to write one anyway, while everything is fresh in my mind.

Warrior:  Pirate - Jade Claws, Fire Fly, Maelstrom Portal, Flametongue Totem. For Pirate you want to clear his minions as fast as possible. Jade Lightning can be very strong to handle Frothing Berserker and or any other hard to handle minion. Tar Creeper is also a good hold if your hand is blank. This is a great matchup for us. Unless you get a rough draw and he gets the nuts, you should win. But Pirate can do some crazy stuff sometimes...

Taunt - Jade Claws, Fire Fly, Hex, Flametongue Totem. Taunt Warrior is a bit more difficult. Full aggro is the way to go. Flametongue Totem behind a taunt, buffing 2 minions is the way to go. If they don't have the removal, you have a shot. Late game is also possible if you can maintain a strong board against the Rag hero power. Use Kalimos, Primal Lord to build a board with 1/1s. Bloodlust is another great card for this matchup.

Mage: Fire Fly, Flametongue Totem. The mulligan isn't the problem is this one. You basically need to kill them as fast as possible. The infinite Fireball deck is basically either you kill him first with an early Bloodlust down to 1 health and pop his block early or they complete their quest and you die. The Molten Giant version is basically the same, but you can play a bunch of taunt minions if you know the combo is coming. The Burn version depends on Kalimos, Primal Lord, save him to heal up after Alexstrasza.

Rogue: Quest - Fire Fly, Flametongue Totem, Jade Claws, Maelstrom Portal. Another tough one, try to go as aggro as possible! Almost all face, except when you need to clear the board before they play the quest and to get more favorable trades to keep your minions alive. If they leave a Charge minion on the board, KILL IT!!! If they leave a quest combo card on the board, KILL IT!!! If they play an Igneous Elemental, Hex IT!!!!

Miracle - Fire Fly, Flametongue Totem, Jade Claws, Hex. Hex his Edwin VanCleef and Sherazin, Corpse Flower, keep a board while clearing theirs and that's GG. But it is Miracle Rogue so anything can happen....

Shaman: Fire Fly, Flametongue Totem, Jade Claws. I've only faced the Elemental Shamans and the matchup is basically have a bigger board than them, clear their minions and go face as often as possible. For the Ancestral Spirit version, Hex would be a keeper.

Paladin: Aggro - Fire Fly, Flametongue Totem, Jade Claws, Maelstrom Portal. This is both for the Buff Paladin and the Aggro Murloc Paladin. Basically get board control as early as possible, keep clearing there board efficiently and you will win.

Control - Fire Fly, Flametongue Totem, Jade Claws. Try to keep board control, but DO NOT overextend. Use your hero power and trade using Flametongue Totem as best as you can. Save Hex for Tirion Fordring and any card buffed by Spikeridged Steed.

Warlock: Discard -  Fire Fly, Flametongue Totem, Jade Claws, Maelstrom Portal. Same as the other aggro type decks, try for early board control and try to survive until you get out some taunts and then start playing your big boys. Then GG.

Druid: Aggro/Token - Fire Fly, Flametongue Totem, Jade Claws, Maelstrom Portal. Same as the other aggro decks, clear board, maintain control, yada, yada, yada. Be mindful of Living Mana, this card can just straight up create a board and win the game. Be aware that they lose their mana using this card so play around Savage Roar appropriately. Also try to save your AoE for the Living Mana IF YOU CAN, if you need to use them to get board control early, then use them!

Ramp -  Fire Fly, Flametongue Totem, Jade Claws. Try you get an early board and just go face as fast as possible. Hex can be a great card, but unless you are 100% sure it is Ramp Druid, you just can't hold it in the Mulligan.

Priest: Fire Fly, Flametongue Totem, Jade Claws. Despite the win rate above, this is a TOUGH matchup. The matchups are basically the Silence, Miracle, and Dragon versions. Dragon Priest is winnable. Always be mindful of Dragonfire Potion and don't overextend in the board. Also Primordial Drake can take down your board too, so at 8 mana be aware that a lot of your board can be cleared.

For the Silence and Miracle variety, try to get a board and keep it. They typically have less board clears, but some tech in Dragonfire Potion. You can't really play around it, but if they are acting fishy so might want to hold back a little. Hex can be huge if they mess up and use Divine Spirit and don't outright kill you. You don't want them to have any minions on board that they can buff so try to keep the board clear. But sometimes they can just outright kill you.

Overall: Try to save the Fire Elementals from Fire Fly for Elemental synergy. It is very important to make sure you are aware that an Elemental has to be played the TURN BEFORE you play an Elemental synergy card. Also, it is easy to forget about your Flametongue Totem position. Always be mindful to put minions from hand to the left of the totem as your hero power and Jade tokens will spawn to the right of it. That is a basic Flametongue Totem rule, but you get the gist of it. Also try to maximize your Flametongue Totem value by buffing 2 active minions. Sometimes this isn't possible against aggro, but that is fine to maintain board control.

Tech Cards: Some interesting tech cards that can be used are the following:

Devolve - help against Murloc and Druid aggro decks. Can also be useful against Taunt Warrior for a final Bloodlust push. Can kind of act like a 3rd Hex against certain decks.

Spirit Echo - This can help if you're facing a lot of Control decks. Helped against Taunt Warrior when they left your board up for too long.

So feel free to ask question in the chat if you like. I have been getting a lot of positive feedback on this so if I keep getting 'likes' and any other questions, I'll keep updating this guide with more details on how to play against certain classes and styles.