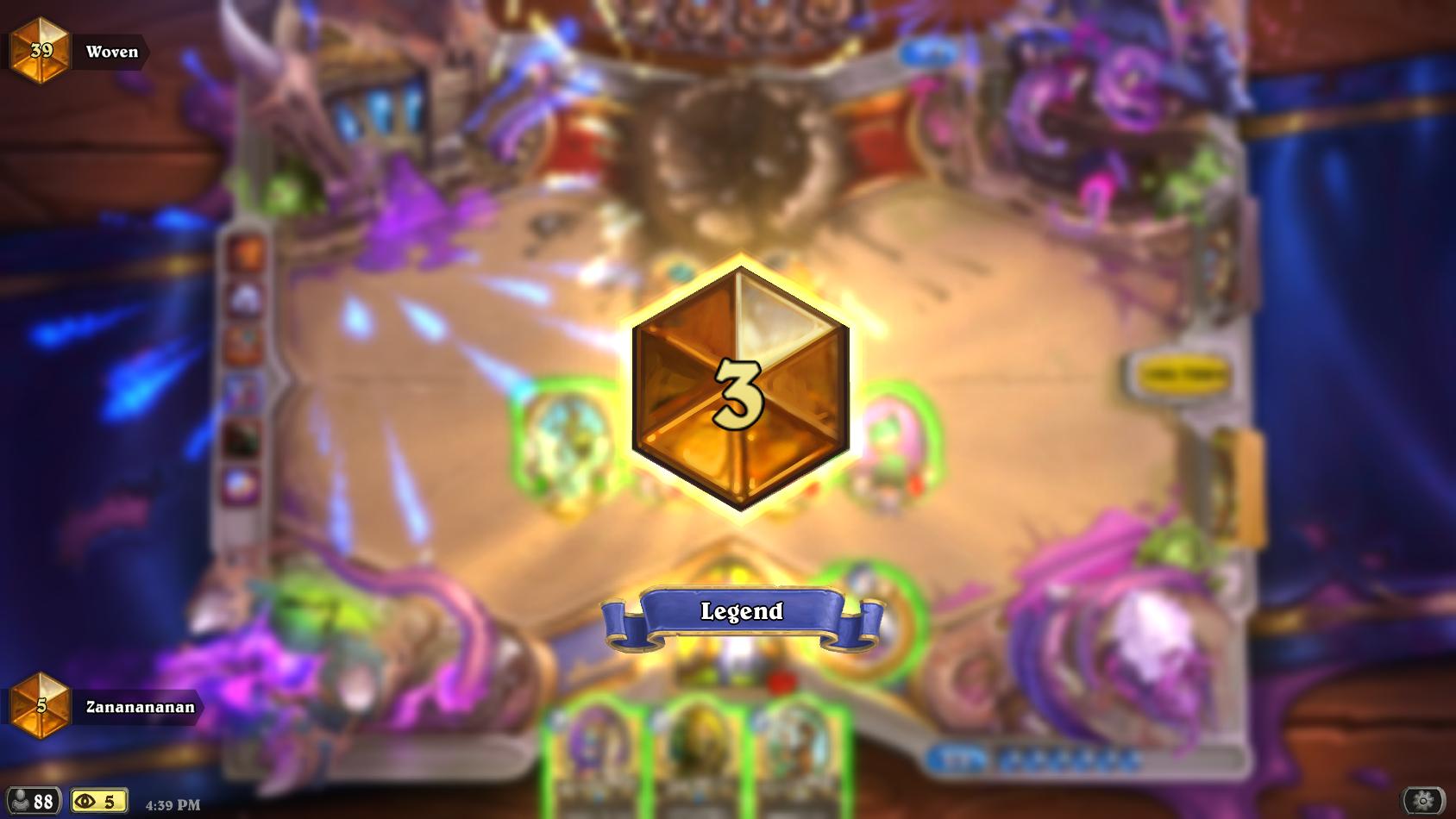 Zananananan here (https://twitter.com/Zanananan, https://www.twitch.tv/zanananan). I just wanted to share my new Zoo with you. Ravasaur Runt and Ravenous Pterrordax are just insane, you are almost always getting value.

I offer coachings for 20,00 €/hour. If you are interested, please leave me a message on Twitter or Hearthpwn.

I'm Florian 'Zananananan' Marschner, 18 years old and a German Hearthstone player for Wolves esports. I've been playing Hearthstone for almost 2 years now. During my early days I was a huge fan of Zoo. I've been playing tons of Zoo on ladder and in tournaments and it's been doing very well for me. I'm also the guy who built the first refined Discardlock when Karazhan came out. This deck is probably easy to learn but I believe that it is one of the hardest decks to play perfectly in the game.

Classic Zoolock is a strategy that revolves around taking the board early, using minions and buffs to trade favorably with higher-value minions. It also relies on high-impact/swing turns (such as a free Silverware Golem or extra card draw from Malchezaar's Imp).

The key is to realize when you have to go all in and when you can afford to play around AOE.

I'm not a big fan of posting stats with a small sample size, it doesn't say anything. But people asked me over and over again, that's why they are here anyway.

Most of the time it doesn't matter, but it can still win or lose you some games. You always want to maximize the efficiency of Dire Wolf Alpha.

Only good against slower decks. The Ravenous Pterrordax is so powerful, it could be a Flamewreathed Faceless without overload.

You have a 33% Chance to discard the Silverware Golem and to win the game on turn 2.

heavily favored - Keep Darkshire Councilman or Ravenous Pterrordax if you have the coin and a 1 drop.

This deck eats Quest Rogues for breakfast. The Caverns Below is way to slow, they can only win with an Edwin VanCleef. Make sure to play around Fan of Knives. Don't play around Sap, most lists aren't running it.

slightly favored - You really want your 1 drops in this matchup. Soulfire is a fine keep if you have a good curve.

Soulfire deals with Frothing Berserker and Bloodsail Cultist. Make sure to clear his pirates because of Bloodsail Cultist and Southsea Captain. You can play around N'Zoth's First Mate and Patches the Pirate by playing Voidwalker or Malchezaar's Imp instead of Flame Imp turn 1.

unfavored - Keep Darkshire Councilman or Ravenous Pterrordax if you have the coin and a 1 drop.

The key is to realize when you have to go all in and when you can afford to play around Ravaging Ghoul or Brawl. You can play around Fiery War Axe by playing Possessed Villager or Argent Squire instead of Flame Imp turn 1.

slightly favored - You want your 1 drops in this matchup.

Always clear their stuff to play around Mark of the Lotus, Power of the Wild and Mark of Y'Shaarj. You win if they don't cheat with Innervate.

heavily favored - Keep Darkshire Councilman or Ravenous Pterrordax if you have the coin and a 1 drop.

It's really hard for them to deal with Darkshire Councilman. Keep Wrath and Swipe in mind. Poison Spit on Ravasaur Runt is fine. They can't play Ancient of War then.

even - You want your 1 drops, the early game is really important.

Dire Wolf Alpha is really good with Possessed Villager or Argent Squire. You can kill a Crackling Razormaw, a Knife Juggler or the deathrattle from Kindly Grandmother with it. Try to not give him beast synergy with Crackling Razormaw and Houndmaster. The only comeback mechanic they have is Knife Juggler + Unleash the Hounds. You are slightly favored if they don't run Knife Juggler.

slightly favored - Same as Face Hunter but without the Knife Juggler Unleash the Hounds combo.

heavily favored - The Marsh Queen is bad, way to slow.

slightly favored - Keep Darkshire Councilman Ravenous Pterrordax if you have the coin and a 1 drop.

Play Possessed Villager on turn 1 over Argent Squire to play around Doomsayer. This matchup comes down to Frost Nova + Doomsayer. It's nearly impossible for them to win without this combo. You can tech in Crazed Alchemist or Devilsaur Egg to make the matchup better. Most lists aren't running Volcanic Potion, you don't need to play around that. Be aware of Blizzard, you can buff 2 2 health minions with Defender of Argus to play around it. Make sure to not fill up your board, you want to be able to kill them with Doomguard if they freeze your minions. Other then that you have to hope that they don't highroll with Babbling Book Primordial Glyph or Cabalist's Tome.

I love the mirror, you are getting punished for every single small mistake. The early game is very important, Zoo doesn't have a comeback mechanic. Make sure to always clear his minions to deny Dire Wolf Alpha, Ravasaur Runt, Ravenous Pterrordax and Defender of Argus value. You should also clear Malchezaar's Imp.

heavily unfavored - Keep Darkshire Councilman Ravenous Pterrordax if you have the coin and a 1 drop.

This is probably the worst matchup, you can only win if they draw bad. They have big taunts and you can't do anything about it. Corrupting Mist is extremly powerful. Hellfire and Doomsayer destroys you too. Don't play around anything and hope they don't have the answer.

unfavored - Keep Darkshire Councilman Ravenous Pterrordax if you have the coin and a 1 drop.

Be aware of Maelstrom Portal and Lightning Storm. You can't play around Devolve. Kalimos, Primal Lord is really annoying because of Invocation of Air and Invocation of Water. Most of the time you can play around 1 AOE but you never beat 2. Liquid Membrane on Ravenous Pterrordax is not that bad to play around Hex.

They aren't playing AOE, you win.

I haven't really faced a lot of Paladins and Priests, they feel like bottom tier again. I'll update the guide when they are getting more popular.

Just a worse Silverware Golem. Not enough impact if you discard her.

Bad. Hard to discard 6 cards and it's way to slow.

You don't want to make the deck to inconsistent. Lakkari Felhound is terrible compared to Doomguard. It's only good with Malchezaar's Imp.

How does the Coaching work?

First of all I'll ask you a few questions, e.g. What was your highest rank so far? What are your goals? Then we'll start playing some games. I'll talk about the specific matchup and the gameplan. You'll suggest a play and then we'll talk about the reasoning behind it. We'll also talk about reading the opponent's hand and when you have to take risks.

We can obviously talk about the prize if you are booking more than 1 hour.

I guess it depends on the meta. It's really good against Doomsayer or AOE. Also synergy with Ravenous Pterrordax on curve. Not to great in an aggro meta, that's why I'm not playing it at the moment.

I underestimated Fire Fly, it's a really good card. Darkshire Librarian is not that great of a card and the meta slowed down a bit, that's why I put 1 Devilsaur Egg in.