I am Farq The Orc and this deck just shot me to legend with 73.5% winrate (decktracker stats) from rank 5 to legend over 49 games. It is finely tuned against the pirates meta - it eats pirate decks for breakfast (67% winrate) and if you're like me and love dragon decks, please read on and I will explain why 1 or 2 cards make all the difference. 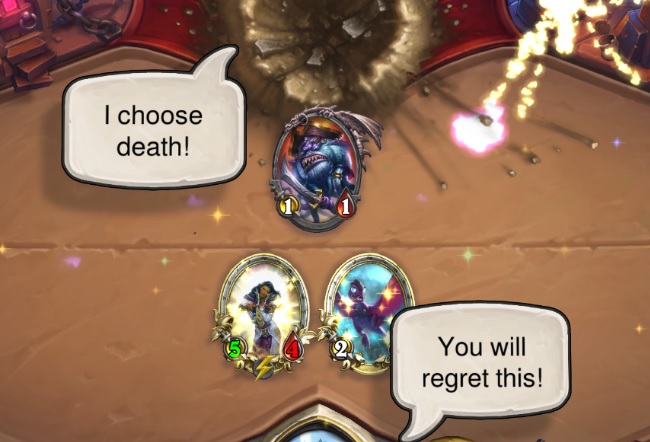 Firstly, to tackle a criticism - many people claim dragon decks are boring and that "curvestone" decks take no skill to play. Of course, dragon priest is a midrange deck where you aim to play an overstatted minion each turn. Compared to reno or miracle decks, sure, there is less skill involved in playing the deck, but I will answer this criticism by saying: You win with dragon priest firstly in the deck tuning, secondly in the mulligan and thirdly by knowing exactly when to stop trading minions and go face. So, focus your skill and thinking into those areas ;)

Perhaps more so than other decks, dragon priest needs to be finely tuned to the meta, and 1 or 2 card choices can make all the difference between floating at rank 5 and getting to legend.

So! To address the meta, which is basically pirate warrior, shaman, reno decks and jades, our dragon priest needs to A) answer early threats B) be able to push hard in the mid game (around turns 5-7), C) get value in the long game and D) beat jade druid. Let's look at each one of these attributes.

Inner Fire can LevelUp! your minions to trade smartly or threaten lethal.

A) Answer early threats. We are running a "full package" of early answers including 2 Shadow Word: Pain and an Acidic Swamp Ooze. There are also 2 Blackwing Technician. Why? Having a good 3 drop is *insanely* important for dragon priest, and with five 3-drops we are maximizing the chance of getting one. There is also a Defender of Argus to block arcanite reapers. This good early game start gives us a 67% winrate vs pirate warrior.

B) Push hard in the mid game. I was looking for a versatile win condition in one card and started using Inner Fire. It can also gain mid game tempo by turning a Twilight Guardian into a 6/6 (or a 9/9 with Kabal Talonpriest) for trading up into a bigger minion. Combined with Drakonid Operative (which we all know is OP) we have an extremely strong mid game. There is also Defender of Argus to allow 3/5's and 3/6's to take out an opponent's Azure Drake, or for Drakonid to neatly snipe opponent's drakonid in the mirror.

C) Get value in the long game. Pretty much all dragon decks run Brann Bronzebeard and try to combo with Netherspite Historian and Drakonid Operative later in the game (rather than early) to get extra value. This deck also has ---> Ysera. Why? Can't you get Ysera off a Netherspite? Sure, you can, but not always. Ysera is a long game win condition, a form of card draw, a dragon trigger and a supreme target for Inner Fire (a 12/12, anyone? Nom Nom Nom). So we include Ysera in this deck - golden, of course ;)

D) Beating Jade Druid. Beating Jade druid requires recognising their playstyle and key cards and using the strategy "trade early - then switch and go face". For the early game you want to get a 1-drop, 2-drop, 3-drop and 4-drop on curve. When they drop the 3/6 taunt, use shadow word pain or Book Wyrm, heal up your minions and from that point onwards GO FACE. If you play a long game the jades will eventually kill you, so ignore the jades from about 5/5 onwards, play small taunts, and push face. Note that Shadow word:pain and death counter some of their key cards (fandrall, ancients, etc). 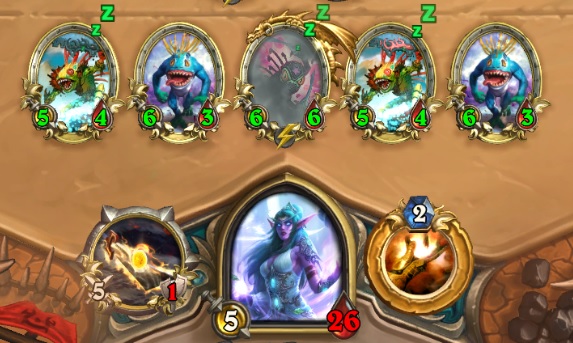 To address all these strategies, we dropped some cards that might seem counter intuitive, and I'll explain why.

Minus one Northshire Cleric. Why? Having 2 clerics in your hand at the start of the game will often mean you lose. You need to curve out with strong 2, 3 and 4 drops. Having 1 Northshire Cleric for the mid game is fine, in fact you should mulligan it away anyway. Another consideration is that the exact 2 classes where you "always" play cleric on turn 1 (vs hunter and vs paladin) are not played at the moment.

No Azure Drakes. What?? Are you crazy? Well, yes, and... no. Azure Drake is a great card, but not for this deck. We are so used to including it that we don't question why. The card draw is nice, but the body is weak and we only run 1 spell that benefits from spell damage. Other than the dragon tag the card is pretty useless for us. Plus we have Drakonid for "card draw". If you didn't try dropping the drakes - do it. You won't miss them.

No DragonFire potion? Wait, but didn't Pavel and Thijs both run it? True, they did, but it's one of those cards that just tends to sit in your hand. Versus pirate warrior Dragonfire Potion comes too late and versus jades it wont help when they get to 7/7's and 8/8's. Plus a 6 mana card is clunky, at most you can play another 4 mana card on the same turn. Besides, midrange decks dont have time to play this on turn 6 - that's when you should just ignore the other minions, taunt up and go face.

No Ragnaros? It's popular in some lists for Ragnaros the Firelord at the moment. But why? Ragnaros is useless if your opponent goes wide on the board, and if you have Drakonid Operative and one other card in your hand, would you rather Ysera or Ragnaros? Ysera as a single card has won me so many games on the road to legend - don't understimate her power, or how difficult she is to remove if your opponent doesn't have a poly or a hex.

Cutting the cards mentioned above shot my winrate from below 60% to over 73%. 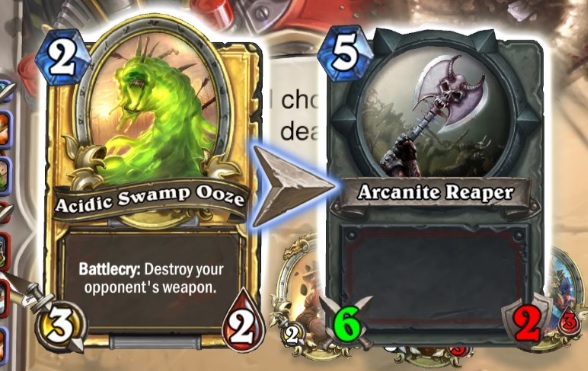 1. Overwhelm the board with midrange minions. This is your main strategy. Multiple minions wth 6 health are hard to remove. Try to keep out of AOE range of your opponent, don't overplay into Twisting Nether, and get value by healing and trading your minions multiple times (use defender of argus and holy nova to "trade up")

2. Steal something your opponent won't expect. Drakonid Operative is an insanely OP card not just because it's a "pit fighter, draw a card" but because it can open up new win conditions your opponent won't expect. If you can steal a Dirty Rat and pull their Kazakus (did this) - you win. If you can steal a Leeroy and Power Overwhelm (did this too), you win. Be creative! And *think* about the card choices from the discover before you take one, especially if you have 2 discovers from brann.

3. Use Inner Fire (bonus with Kabal Talonpriest). This card will win you so many games. Because you are playing defensively stat'ed minions, it's easy to turn a 3/6 into a 6/6, trade with a 4/4, and heal it up. Alternatively you can surprise an opponent in the lategame (no-one will suspect "burst" from a priest in this manner)

4. Ysera. Simply fight like hell through the midgame until your opponent and you are essentially top decking and fighting a grindy sort of game. Lure out hex or poly if you can, and then drop Ysera. If your opponent can't answer her, she can win the game for you single-handedly. 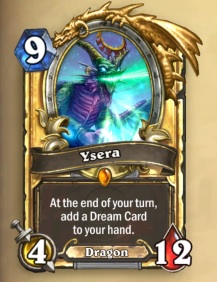 If you need a dragon trigger, keep the whelp and / or the agent and throw away everything else.

Throw back all spells (keep Shadow Word: Pain versus shaman) and throw back Northshire Cleric (unless your also have Power Word: Shield - or if your opponent is hunter or paladin).

Versus pirate warrior you want Acidic Swamp Ooze, Shadow Word: Pain, any of your 1- or 2- drops (else a 3 drop with coin) and Northshire Cleric is especially good if going first (counters all pirate warrior openings, else forces them to coin into war axe on turn 1, losing crucial early game tempo).

In the mirror match or versus slower decks (like reno, freeze mage) you can keep Drakonid Operative (or Netherspite Historian, which can often get you an operative).

Remember, you *must* mulligan hard for a good start and you *must* be able to trigger your dragon cards.

Versus agro decks you want to contest the board early and focus on removing their minions quickly before you can outvalue them and taunt up in the mid / late game. Coin out Wyrmrest Agent or Blackwing Technician if you can. Play out all your early minions even if you don't have triggers.

Versus control decks the strategy is the opposite - you want to play out a good curve using your dragon trigger cards, save the coin for Twilight Guardian or Drakonid Operative, push face damage and either make them waste premium removal on your mid game minions or just flat out kill them before they can outvalue you in the late game. If it gets to the late game, you have Brann Bronzebeard and discovers for value, or just Ysera.

Please watch these fantastic showcase videos below to see these strategies in action (throw them a like if you find the videos useful.)

Join me in wishing "Farewell" to the dragon army - we likely won't see another dragon deck this strong in Standard before 2018, so if you're going for legend right now in the last month of Year of the Kraken, I hope my list and my commentary helps you, good luck, thanks for reading my guide - and may your oppponents be burned in dragonfire!!

HALL OF FAME (players who reached legend rank with this deck):