This was a project that was made prior to the release Journey to Un'Goro.

Edit: Thanks so much for the great feedback! You guys are legendary :^) 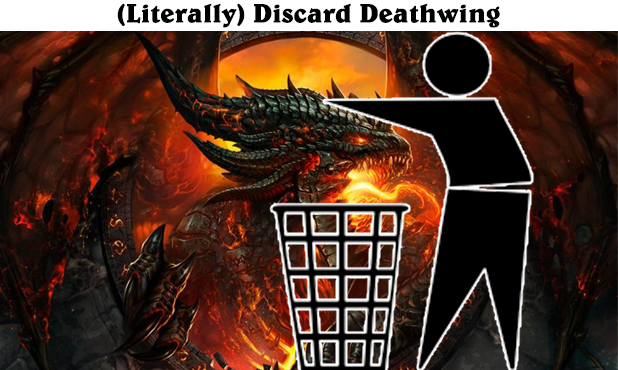 EDIT: After having tested the deck, I figured it was too slow versus aggro and too weak versus control. I still think the deck can be tweaked and maybe find its spot in a future meta. Furthermore, you can make this deck incredibly good if you just tweak it a little bit by removing the most key (and fun) cards such as Deathwing. I would personally suggest removing The Curator, Deathwing, 2x Lakarri Felhounds, Lakkari Sacrifice, then add inn 2x Possessed Villager, 1x Ravenous Pterrordax (so you'll have 2 in total), 2x Knife Juggler. This should make the deck really solid, but, of course, also more boring. If you think Clutchmother Zavas is too weak and not impactful enough, just swap her for a Darkshire Librarian.

In this deck, the plan is to outvalue your opponent in the early game, and then slam down Deathwing on turn ten, where dropping him would almost guarantee you to complete the Quest from Lakkari Sacrifice. This results in you being given Nether Portal as follow-up to further outvalue your opponent and win the game. What makes this a powerful play, is that by playing Deathwing, he has the potential to synergise with both Clutchmother Zavas and Silverware Golem. Furthermore, this line of play will, as previously mentioned, reward you with Nether Portal, which, if you ever were to play Deathwing onto, wouldn't be destroyed as it's indestructible. 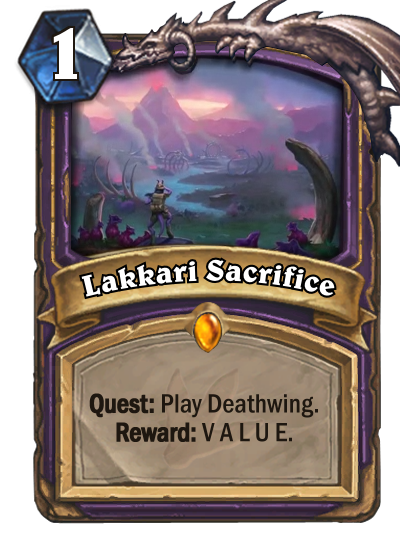 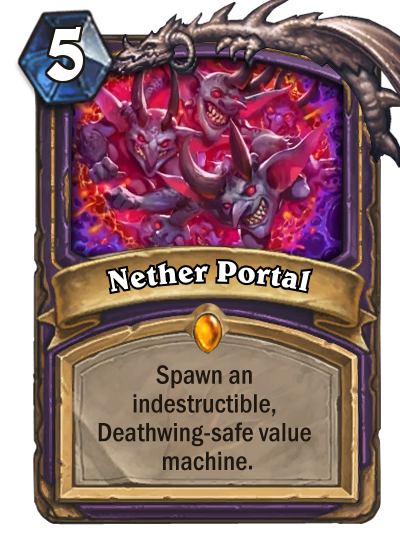 The Curator is an inclusion that boosts the deck's consistency, as it helps you drawing Deathwing and either Clutchmother Zavas or Dire Wolf Alpha. Getting to Deathwing as soon as possible could be highly useful in some matchups, and the fact that you on turn 9 (or later) are able to play The Curator and then a Dire Wolf Alpha to place next to it and other potentially present minions, makes it a compelling card to include. Additionally, having Clutchmother Zavas and Deathwing in hand on as early as turn 10 can lead to quite the powerplay the turn after you drop the big dragon, especially considering the fact that a) Deathwing may still be present on the board b) you may play a 2 mana 4/4 (or more) beast c) you may play a 5 mana, imp-summoning portal (unless it's already present, which would be great) d) you have 3 mana you can spend on playing a minion which you drew on your turn (most should be cheap enough), or e) you already had Nether Portal in play, meaning you have 8 mana to use on playing the minion that you drew on your turn, then tap and spend your remaining mana on playing what you just got All in all, The Curator might might make this a nice and consistent deck, despite the sometimes inconsistent discard mechanic. Thanks to user Terminally_Insane for suggesting the card. 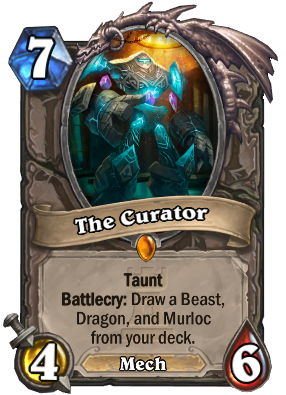 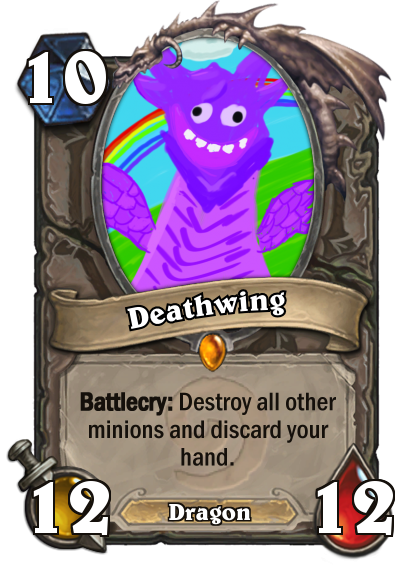 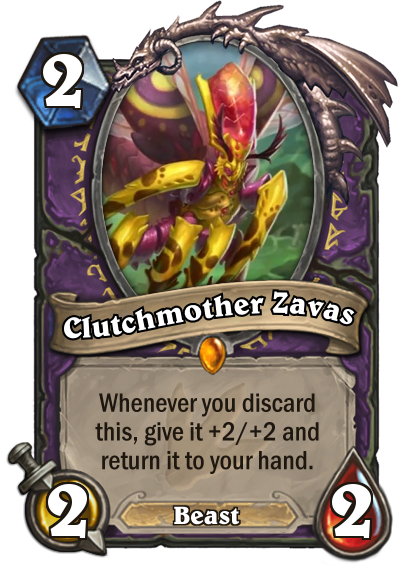 Tar Creeper could serve as a potential replacement for Imp Gang Boss (which is rotating out of Standard), as it in theory can counter aggro exceedingly well, and that is especially important considering how it looks like Pirate warrior is still going to be present in Un'Goro. However, in this deck list, we have removed Tar Creeper and a Darkshire Librarian for 2x copies of the exciting new card Ravasaur Runt. I'll talk more about the Ravasaur in the next paragraph. To end, If the meta in Un'Goro ends up being too aggressive, we should consider adding back Tar Creeper.

Ravasaur Runt is a strong beast card, which, if you're lucky enough, can most of the time end up being a huge threat on the board. It can, in essence, be a 2 mana 2/2 divine shield, and most of us might remember how Shielded Minibot was a very powerful and often "auto-included" minion in Paladin decks. Furthermore, I'll quote user Momegame on his thoughts about the card: "In terms of value, 3 options are really good (+3 health, Divine shield and Deathrattle), 2 are really bad (Taunt and Can't be targeted), 2 are ok (+1/+1 and +3 attack, but this last can be really good if you want to be aggressive) and 3 are meh (Stealth, Windfury and Poisonous). So when you trigger its effect, you have 70% chance to get at least one of the really good options (83% if you consider +3 attack as a really good option), which are good probabilities." In the next paragraph, we'll be coming back to the adapt mechanic when talking about another relevant beast, Ravenous Pterrordax.

Ravenous Pterrordax is one of Un'Goro's the new Warlock cards, and the reason for it being added to our list is because of how strong it potentially can be as a turn four play. It can literally be four mana seven seven if you roll Flaming Claws and Rocky Carapace. Because of all the 1-drops in the deck, and the fact that our playstyle is tempo-oriented, we are supposed to have quite the minion presence, meaning it should be very doable to sacrifice a card for our Pterrodax to dual-evolve, and you can even attack face or trade before sacrificing your potentially already-damaged and used minion. Because we are sacrificing a creature, the stats on the Pterrordax is actually lower than 4/4, because we are losing value, so that would be one downside with the card. The list of adaptations are: Divine shield, +3 Attack, +3 Health, +1/+1, Stealth, Poisonous, Windfury, Can't be targeted, Taunt, and Deathrattle: summon two 1/1 plants. Lastly, this card synergises with The Curator. To summarise: f o u r  m a n a  s e v e n  s e v e n  (kinda). 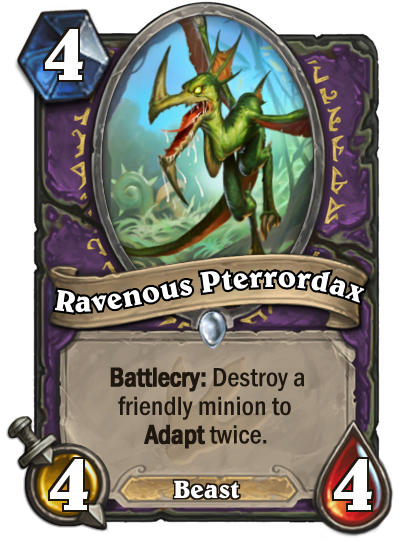 Because the deck is currently running 10 demons (plus those created by Nether Portal), including Crystalweaver would seem like a great idea as its stats are decent and the battlecry can provide you with amazing tempo swings. However, due to the new Warlock card, Ravenous Pterrordax, this will be the card that replaces Crystalweaver. I would love to see Crystalweaver in the deck, but because the card is currently competing with Lakkari Felhound, Ravenous Pterrordax and Defender of Argus for the 4-mana slot, our deck would end up very heavy if we were to include all of these. As a result, just to start somewhere, we will be running two Defender of Arguses, two Lakkari Felhounds and one Ravenous Pterrordax.

Fire Fly has replaced Possessed Villager in this list, mostly due to Power Overwhelming rotating out. Currently, many zoo lists are still running Possessed Villager while also running no PO, however, I believe Fire Fly is a better card because the provided stats are better (2/4 in total compared to Villager's 2/2), you can more easily control when you summon your Flame Elemental compared to Shadowbeast (proving strong if you're facing a priest and you want to prevent your Darkshire Councilman dying to Shadow Word: Death), and it even has better synergy with Defender of Argus and Dire Wolf Alpha. Despite this, you will have to spend one extra mana to use the card to its fullest, but I believe the better stats and the fact that you now can have a "weak" card (Flame Elemental) in your hand, which you can "chose" to discard, makes it worth it. Lastly, I don't believe that Discardlock would suffer much from having to spend one extra mana, as all the previously mentioned pros could make the deck overall more flexible, however, I do feel this is one of the cards in the decklist that is almost certainly going to be swapped out for something better. We'll just have to wait and see. 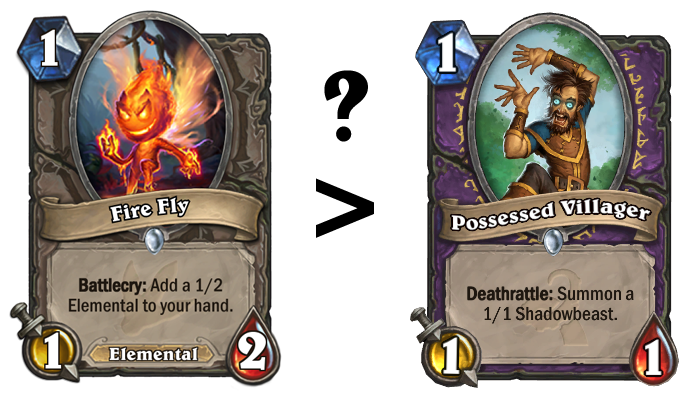 You may ask why I have chosen not to include Cruel Dinomancer in the list, and the reason why is that it is poorly statted and it acts like a Cairne Bloodhoof that, in our deck, may end up summoning very weak minions. Also, the card is way too expensive for our deck type, and drawing him early will be a pain. I feel that this card, at it's average, will end up acting like a weak Cairne Bloodhoof in terms of value, and Cairne doesn't even belong in our deck to begin with. I believe this card may fit better in a different and more heavy warlock deck where you only have a few discard cards, making you more able to chose which cards you want to discard, which would reward you by a lot in the end-game. In those kind of decks, there is also the potential to have some sick combos with the new 4-mana neutral Legendary card, Spiritsinger Umbra. 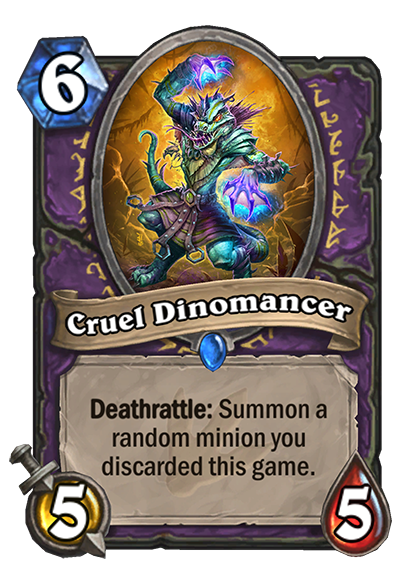 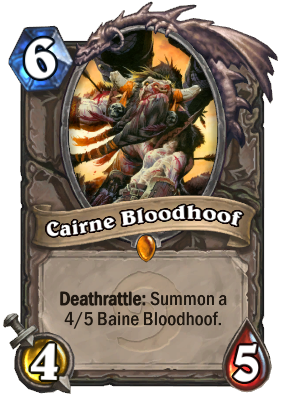 I would love to hear your thoughts about what cards you think should make it, and why.