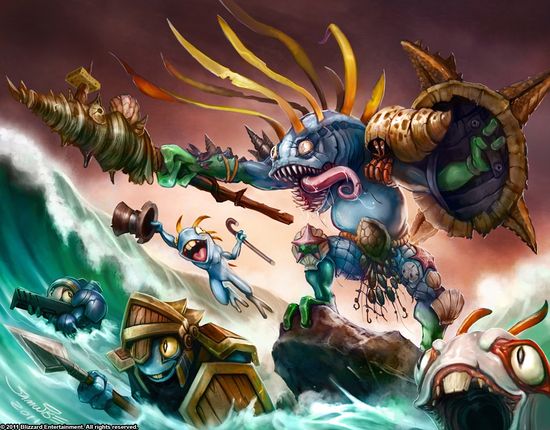 With the recent nerfs to Spirit Claws and Small-Time Buccaneer, we see a shift in the meta that may allow some hunter to sneak in!

It's clear that Hunter's handbuff mechanic simply doesn't work, so this deck aims to ignore Gadgetzan hunter class cards entirely and move towards a Karazhan-era midrange list with the addition of the Finja package.

This card is the ultimate midrange build-around. You sacrifice tempo on turn 5 (or 4 with coin) for a massive swing the following turn. Remember that Finja can survive if he pulls a warleader that buffs his health. Obviously, including Finja means that we need Bluegills and Warleader. We also include The Curator for card draw and consistency.

Excellent card that synergizes with every minion in the deck: There are no bad pulls with Barnes. Every minion has card text! This is why cards like Alleycat and King's Elekk did not make the cut.

Best 8-drop in Hearthstone. Strongly punishes Jade decks, usually bigger than your opponents jades on turn 8, so it will often kill a minion and then score a double trade. Bonus auto-win if pulled by Barnes.

I nearly cut this card but I decided it is here to stay. The card is super useful and synergizes strongly with Finja's summon effect. It also works great with Barnes. Either play it before Barnes on turn 6 to trigger two knife throws, or if Barnes pulls Knife Juggler it will throw one knife! Worst case scenario, your opponent will often throw resources to kill this minion at all costs, sometimes eating a spell that otherwise would kill a murloc.

This card, besides being an insane Barnes target, helps a lot vs. control matchups -- it replaces Call of the Wild which is just too slow. Sylvanas can also be used in conjunction with Kill Command for a ghetto mind control effect.

Avoid playing murlocs if possible if you plan to Finja on turn 5. Once Finja is ready to attack, you can drop a Murloc Warleader from hand to buff his attack and get a surprise trade, or use support cards like Hunter's Mark, Quick Shot, Eaglehorn Bow, Unleash the Hounds, Kill Command, Bluegill Warrior to dish out some surprise damage to secure the trade. Then you'll need to decide whether to go face or trade.

Since we are playing hunter, it's best to push face most of the time, if you wanted to control the board more you should play the Finja rogue variant as it does tempo-based control better than hunter. Use your hero power and push for a quick finish!