[Update]: After a few more wins against Aggro Rogues, I managed to make it to top 20. I must say, it is a way better matchup than Miracle Rogue, so for those giving this archetype a try, it's one easier matchup in the meta. I will try to push for top 10 later. 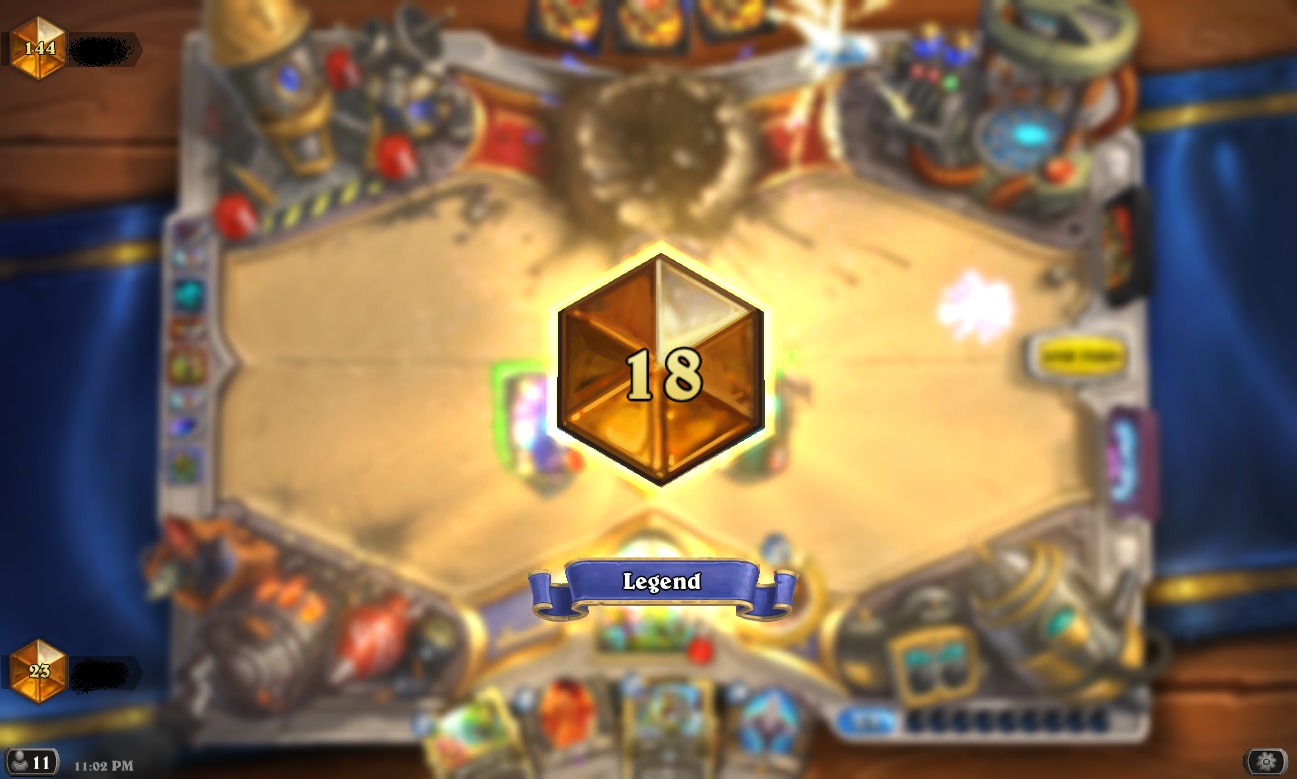 For my favourite archetype (combo), a deep grave has been already dug by Blizzard for the next rotation.
So before we begin the year of ultimate curvestone (not like it wasn't curvy enough), I decided to give my beloved Malygos a final run, this time with Druid, and I've almost exclusively played this deck after hitting legend. Obviously Malygos will stay in Standard, but the possibility to make a decent combo deck around it will be more than likely gone. 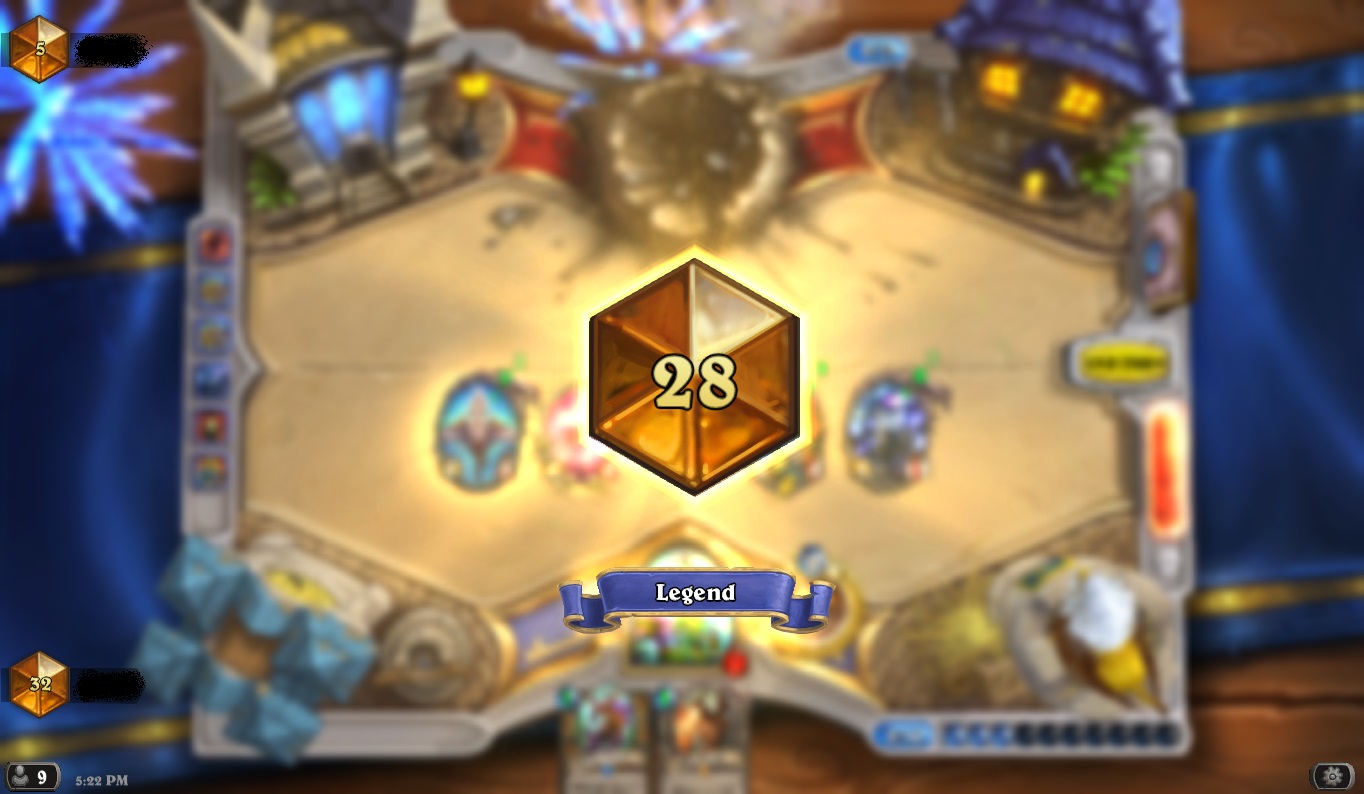 My first version included a copy of Moonfire. I was getting a decent winrate until a big wave of skilled Face Warriors appeared, pushing it back down to 50-55% after 80 games. Moonfire was useless in those matchups, so I teched in Doomsayer instead, resulting in a 70% winrate (32-14) since. Probably overperformed in the current meta, but definitely a deck where your choices actually matter and influence your success rate.

Raven Idol: The card I tried to exclude many times for a free slot, but it won me many games, either by providing health or additional burn for the Malygos combo.

Doomsayer: Personally I don't like including it, but face decks are just too dominant. Even Rogues joined the dark side, and it's especially good against them.

Druid of the Claw: Included mainly because of Warriors, but lines up well against many common minions. Also an additional 4 damage with the Malygos combo, in case you are short of damage.

Mulch: There are multiple targets (even in an aggro deck) that Druids can't deal efficiently without a single target removal.

Gadgetzan Auctioneer: Having to cycle through your deck faster, a copy of Auctioneer must be included. It can help you get lethal after playing Aviana and Kun, even if you don't have the combo pieces yet.

Alexstrasza: A versatile card to include. Sometimes saves you from aggro by healing yourself, a big reach itself after your opponent played Reno, or just simply reduces the required burn from your hand to OTK your opponent.

The possible replacements mostly consist of second copies of cards that I have already included in the deck. Feel free to adjust them according to the meta and/or your personal experience. Different decks are more popular on different ranks. Moonfire is also a good replacement if you ever find yourself playing against slower decks.

Below I will list the most common encounters, without going into extreme details. Just a few advices and what to watch out for.

Possibly the best matchups you can queue into, but there are some things you need to keep in mind for both of them. If Dirty Rat pulls out either Aviana, Kun or Malygos (and gets removed), your combo is ruined, and winning becomes a lot harder unless you were ahead already, so try keeping a minion or two in hand if possible. Kazakus potion (especially the mass polymorph) can be troublesome too. Always mulligan for ramp cards, and if you have it, you may keep your midrange cards like Nourish, Azure Drake or Emperor. Keep Mulch against Renolock. Against Renomage, Ice Block makes the combo trickier. You will often go close to fatigue before launching your combo, so try to save Alexstrasza after popping the Ice Block, allowing you to finish the mage with just minion damage the turn after. There will be times when they draw bad and you get board control early, so don't be affraid to push for lethal even without the combo parts.

After the best matchups, here is the worst. Hope that they draw bad and you get lucky, that's basically it. Even the mulligan is hard, because the efficiency of your early drops highly depend on what minions they start with. Try to find Living Roots, Doomsayer, ramp, Innervate, sometimes I even keep Raven Idol or Wrath to deal with Bloodsail Raider or Kor'kron. If you can survive the early game and clear most of the board, Ancient of Wars will win you the game. You can be aggressive with your minions at this point. If a 9 mana empty Aviana is your best option to survive, go for it.

Contrary to popular belief, Dragon Priest is nothing like Reno Priest. It's a tempo deck, not a control one, therefore is not an easy matchup, but still should be favored for you unless they get an insane start. Keep Doomsayer, and your 5 drops if you find ramp. Cycle for your combo, Malygos + Swipe is your best answer against anything they can possible do. Dropping your Malygos empty is not a bad play, they can't deal with it without a heavy board or a stolen Mulch.

Similar to Face Warrior, an unfavored matchup, maybe a bit more managable if the Shaman misses a perfect curve. Mulligan for Living Roots (best Buccaneer counter), ramp (Innervate, WG, Mire Keeper), Doomsayer, etc. Prioritise on keeping the board pressure low, playing a War into a bunch of 1 drops won't help you, if they will trade efficiently with a Flametongue Totem.

This is a matchup which will generally be decided by how fast you can pull your combo (or at least, a decent swing turn) together. Maybe I should have cleared this up earlier, but by "combo", I don't always mean the full OTK. It's just setting yourself to a position where you will have the highest chance of winning/surviving. Cycle fast with Nourish and Wrath, if possible. This is generally true for all matchups, which are not played against heavy aggro: always draw with Nourish, unless you can set up your combo with the ramp. This deck is not that minion based, so you will run out of answers if you priorize ramping with your card draw mechanics.
Keep ramp and your midrange minions, and if you have other options, don't play a single big minion into their hex. Also keep Living Roots if you know they run Pirates besides the Jades. Keep Devolve + Spellpowered AoE in mind if you go all in too early.

Similar to Jade Shaman, but you have more time because early aggression from their side is unlikely. I think this is the most 50-50 matchup, which is decided by who can get and keep the board first, therefore hard mulliganing for your ramp cards is not a bad idea. Keep your midrange minions and Nourish if you got ramp. Eventually their Jade cards will be too much to handle, but by that time you should be able to pull out a swing turn. Aviana-Kun plus a big board is good, even if you can't kill him or don't have Malygos. Dealing with a big board was never the strong point of the Druid class.

The worst matchup right after Pirate Warrior. No one really likes keeping Feral Rage or Swipe in hand, but dealing with Tomb Pillagers and Azure Drakes is painful without them, not to mention the early Pirate aggression or a big Edwin. Pray that they don't get an Auctioneer + Conceal early on, or you might as well concede, there is absolutely no way to deal with it. Ancient of Wars getting sapped are painful, too. Good curve, early ramp, a lucky Mulch and a well timed Doomsayer can maybe give you some time to turn the chances around.

The new, but not less cancerous archetype of Rogue is surprisingly easier than the Miracle one, despite the deck being more aggressive, but still a bad matchup. Mulligan for anti-aggro tools, they should run out of pressure after a few turns. Their reach is what makes them really problematic, Leeroy + Shadowstep, combined with some Eviscerates is devastating unless you have a taunt up. Taunts, however, are powerful against them, considering most of the lists cut Sap from their lineup.

I am fully aware that this deck is far away from being Tier 1. In fact, I believe Jade Druid is still the better choice for ladder. A slight advantage might come from exactly that: your opponents will expect Jades, not a combo variant. Jade Druid is just so straightforward and boring, I can't even imagine playing it for more than 10 minutes...

Also, if you find yourself only playing against only Shamans and Warriors (especially those who are close to Legend: rank 1-5), I don't advise playing this deck. There is nothing more infuriating than losing to non-stop aggro where the only game interaction happens on your face, and you can do nothing about it.

Otherwise, feel free to try it out, only 1-2 months left to do so in Standard. One of the only decks I still enjoy playing, and feels rewarding to make the correct decisions.