Hey there everyone and welcome!

Don't forget to +1 if you enjoyed the guide/decklist. A lot of time and effort went into these and it's a free and easy way to say thank you.

A Little About Me

I am a 19x Legend Player with 3x Top 100 finishes who goes by the battletag WingsOfWax or WingsOfWaxIII on other social media (Facebook, Twitter, Twitch, and YouTube). I have over 15+ Years of Magic: The Gathering Experience, but as of the release of Hearthstone: Beta been converted to this new and exciting card game.

Over the past year, I have been creating videos, articles, and casting live streams to help educate newer players about Hearthstone: Heroes of Warcraft. As of right now, I am mostly known in the Hearthpwn.com community for creating a Naxxramas + 2,000 Dust Budget Guide 11 Deck series as well as putting Burst Rogue back into fruition.

These days I am working full time, go to school, and still create Hearthstone content whenever I find my schedule allows it. I love educating all types of players whether new or veterans about becoming a better strategy card gamer. I am creating this guide (and others) to help educate and grow the Hearthstone Community even further.

To start us off, this is not a new idea of any kind. Reno Mage has been around for quite a while now and this is only here to inspire players to try it on there own. Reno Mage is in a great spot in the Meta since it has solid answers to everything and enough card advantage to out-do your opponent.

Why this version over the more Antonidas ones?
The Antonidas decks feel more like a Combo/Control deck, which is great versus opposing Control decks. I found myself losing more often than not to the Aggro decks because there were more dead cards to help trigger the Antonidas. After some tuning, I came up with a more controlling build that I liked and started seeing stronger results. 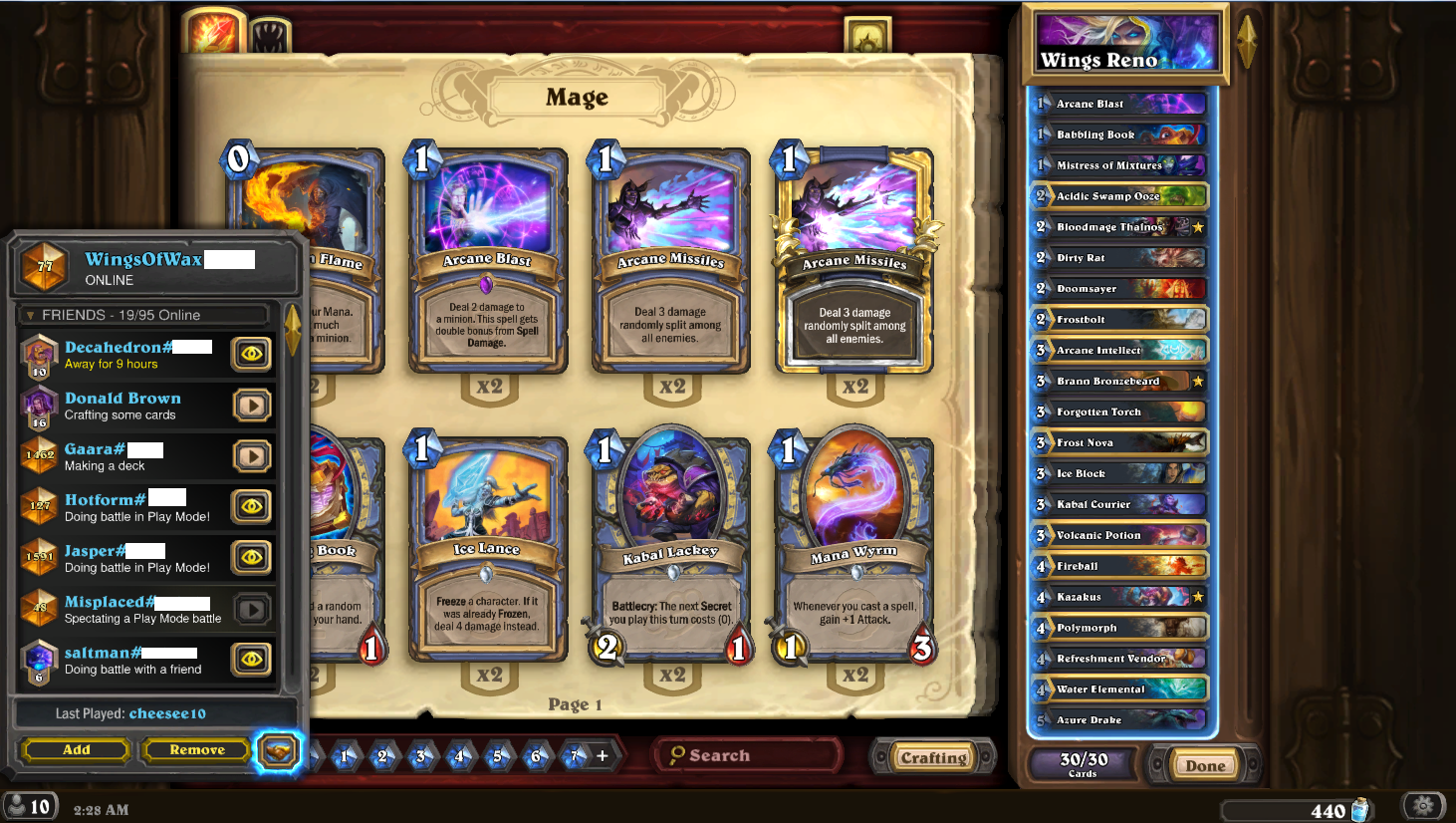 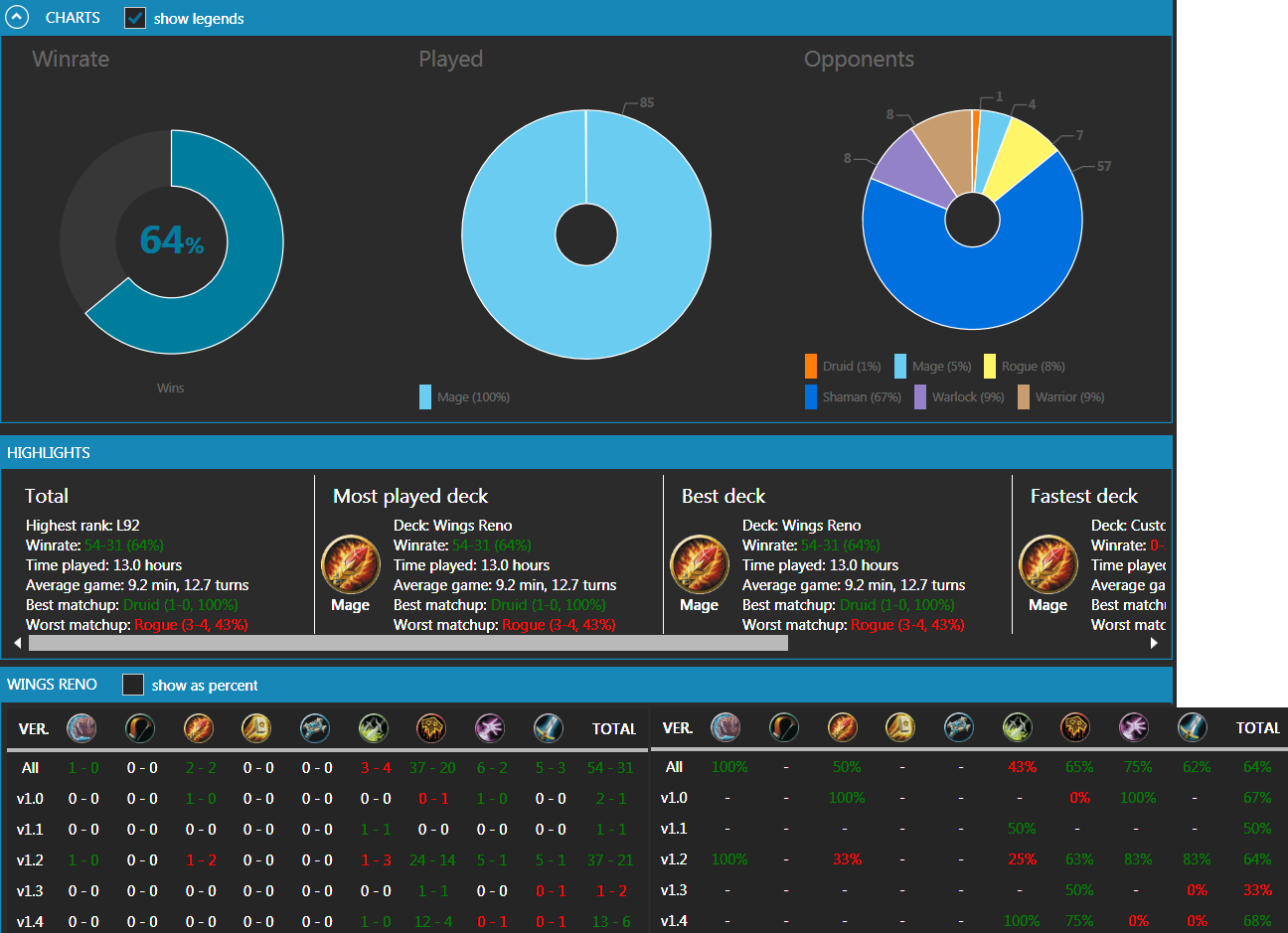 The biggest tech choice was Big Game Hunter. I was using it to kill Alexstrasza, Mountain Giant, Flamewreath  Faceless, Jade Golems, etc. I started running into more Aggro decks and decided I needed to cut the BGH for Mistress of Mixtures.

The next cut I made was Ethereal Conjurer. It is a great card in the Control matchups, but is extremely weak to the Aggro. Typically your Aggro opponents can just ignore it or clean it up easily with a 3 powered weapon. The next viable option in my opinion was Refreshment Vendor. It was a body that could deal with the early to mid game minions and restores much needed health versus Aggro.

Versus Jade Shaman -  You are in it for the long-haul of fatiguing your opponent. Be sure to prioritize your removal spells weakest first to strongest last. If you can't kill the Mana Tide Totem with a Frostbolt, Forgotten Torch, Arcane Blast or AOE try not to fret too much about it. I have won many games where my opponent has drawn 8+ cards from Mana Tide Totems. Your life total can be relatively low since they only runJade Lightnings for burn so be sure to prioritize killing the strongest minions on board. Most of the games won are by setting up a turn to safely play a Medivh, the Guardian and ride him to victory.

Versus Pirate Decks - Stem the bleeding as quickly as possible. Make sure your concern is about killing minions on board rather than drawing cards or developing board when given the option. If you get to 6 mana with a Reno and your at or around 15 health, more than likely you should cast it. Pirate decks tend to run a lot of burn spells and can easily kill you from 15 health with only one or two minions on board.

Versus Control Decks - You want to assemble combos as quickly as possible or just keep playing value cards. Try to save Reno for after your opponent Alex's you. Don't be afraid to burn weak cards (Volcanic Potion, Flamestrike, Arcane Blast, etc) in your hand to make room for Cabalist Tomes or Kazakus/Demon Potions.

This is a rough guide to figuring out your potion choices.

Interested in learning more? Feel free to stop by my Twitch Stream and subscribe to my YouTube, in which I'll either be playing Ranked mode with a variety of decks.

Don't forget to +1 if you enjoyed the read/video/decklist.

Thank you for checking out this deck and I hope it serves you well.

Good luck and grind on,