I was inspired to build up a deck, that i loved for a very long time.  Fed up with the ladder as it is right now i created something special and it's pretty goooooood!. As a control warrior player since beta, this was always my deck to go. At first I was a bit affraid that it won't suffice in this gimmicky meta. However, i was very, very wrong :) Seeing it now, playing it, and ranking up with it efficiently brought back tears of joy... nostalgic... and boy! It PERFORMS as hell! From rank 9 to 6* in no time!

I started tracking the deck right from the beginning, and i've got around 75% win ratio from ranked (i have casual charts as well, and they had almost every win) I'll start uploading screenshots to hearthpwn's deck writeup so be patient :) I'll do a mulligan guide too when the deck gets upvoted to 20. 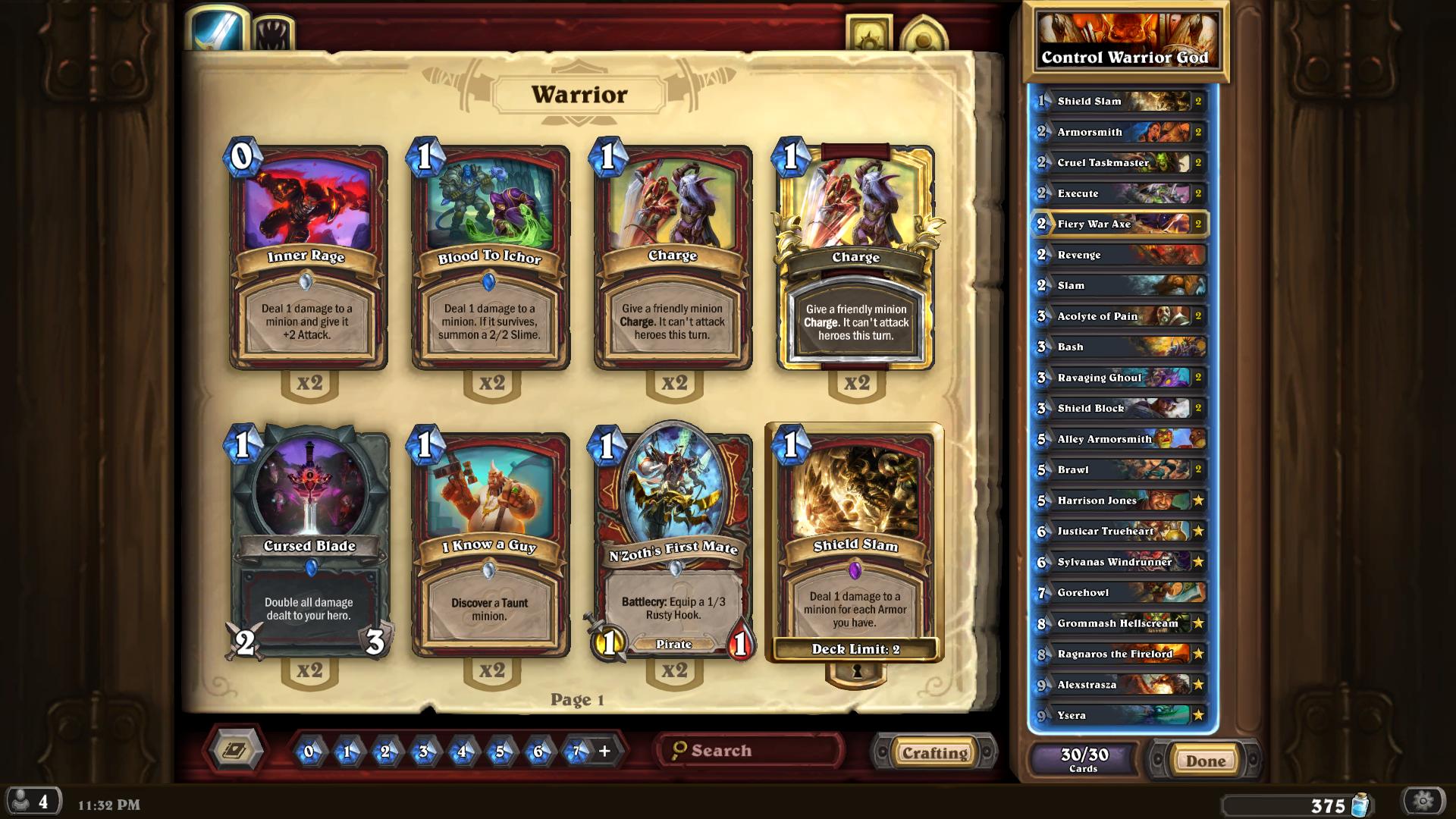 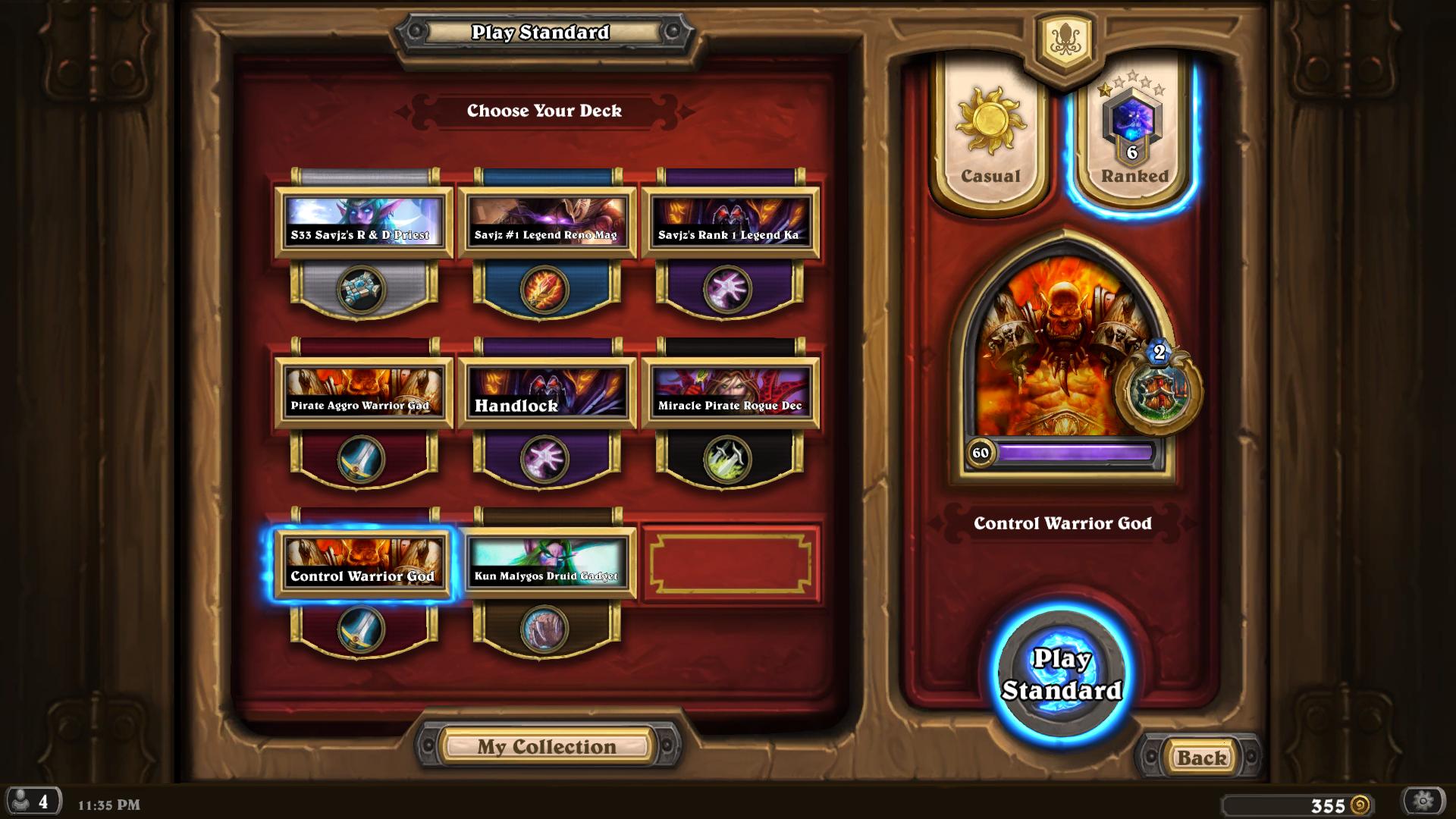 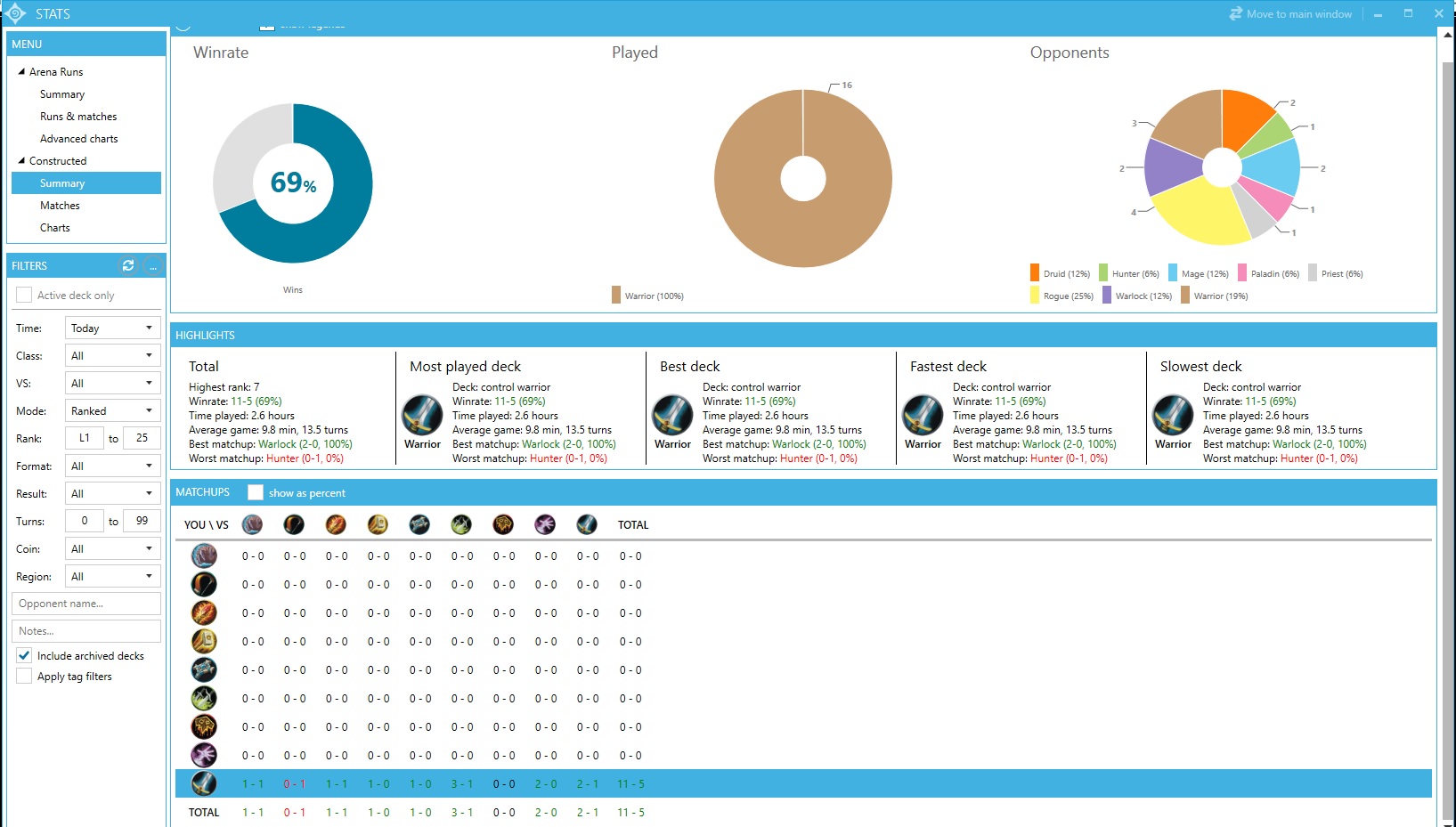 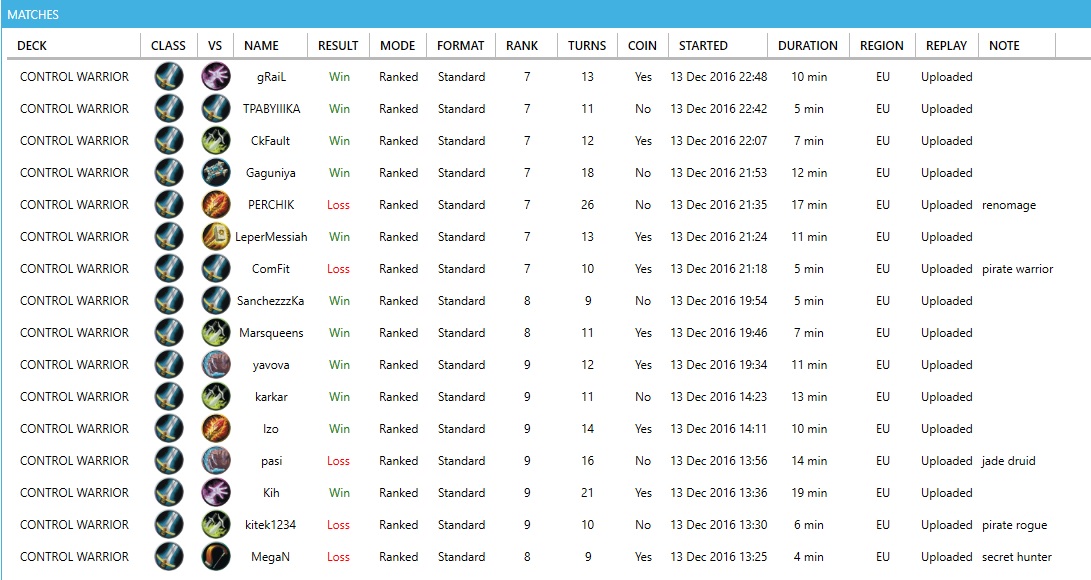 Mulligan guide will be up soon, if you like the deck give it a +

The deck may look like a classic control warrior. However, there are some major changes to it, some people may think the nerf of Execute was a "shoot oneself in the foot" to the whole archetype, but it hasn't made that much impact and the card is still playable. Why no Elise in this deck? It breaks consistency too much. Your goal is to OTK your opponent within 2 turns Alexstrasza into Cruel Taskmaster+Grommash Hellscream and most of the time you achieve it.

Cruel Taskmaster - this card is the HERO of this deck, it has so many functions, from removal, to combo activation. Very versatile card imho. Its true strength comes from a somewhat "big" body during this aggro-infested ladder i trades well with other 1 and 2 drops, above that the ability to ping for 1 damage is just insane.

Armorsmith - long forgotten card, seemed dead nowadays but it has a robust body and very important ability that crushes your aggro opponents to shreds. Even control-oriented players have problems dealing with it. 1/4 body is just too much to deal in 1 turn. Put these two on board against a pirate warrior and you gave yourself aditional 3-4 turns of survival and build-up your armor. When combo'd with Revenge or Ravaging Ghoul, they just insta-concede.

Alley Armorsmith - this one is quite unique to the decklist, nothing special with vanilla statline - 2/7 body with taunt for 5 mana is a lot but the ability to attack and gain armor is just riddiculously strong. Although, it won't work against spell-based attacks, it works wonders when countering minions. I sometimes had problems with armor gain in some matchups but this guy solved the problem - sometimes it is better to attack and gain armor than hero powering, trust me on this one. The biggest advantage is the combo with Cruel Taskmaster. I've seen Priests leaving this on board for several turns, entombing it, attacking it with AOE's, desperately trying to remove it. Overall a very good card.

Ysera - When everything else fails, there is ysera. It costs a lot, very difficult to pull her off in an average match, but if you do, it obliberates each and every control-oriented game. 4/12 body is a big threat to the opponent, not only hard to remove but it costs a lot of your opponent "stamina" to get rid of her from the board. She will leave always something interesting and ready to use in your hand, even the 3/5 body is quite annoying to deal with, as it is immune to spells. Ysera is your only ticket to victory if the gromm combo isn't enough. I suggest playing her last as a "last stand card".

Gorehowl - This is the most unique weapon in the game. Period. The ability to decrease attack instead of durability is huge. There are so many minions that require fast removal. Many of them have  5+ HP Emperor Thaurissan, Drakonid Operative, Sylvanas Windrunner, Abyssal Enforcer, Archmage Antonidas, these are only few of them that can be dealt easily with this awesome weapon. If not for minions, you can use it like a hammer and hit face for 7 damage :) SMOrc!

Harrison Jones - self-explanatory really, there are so much matchups against rogues, renolocks, pirate warriors, that you need to destroy their weapons asap. It goes especially for warriors. I had a match where a dude upgraded his Arcanite Reaper to 8/4 and got totally owned when i put it in the museum - conceded instantly with some BM'ing. I wouldn't recommend using it on full Lord Jaraxxus, unless you have 1-2 cards in hand, which is nearly impossible most of the time. Great card if you ask me :)

Ragnaros the Firelord - so many years have passed and this guy is still one of the best legendary minions in the game, i think this card is staple tier 1 card not only in this deck. Most of the time you stall the game and build your armor up, using him as a damage to face or minion elimination is a great way to screw your opponent's curve or make him panic if he has no removal in hand. Suprisingly, people tend to ignore it because of his randomness, but against control warrior this is a huge mistake leaving it on the board. Brawl, Execute, Shield Slam, Bash are just a few ways to deal with other minions they play, and we all know -> less minions = better ragnaros effectiveness.

Revenge - this card is mostly useful against super aggro decks, though it can be used as an early removal, draw mechanic, armor gain or an activator for Grommash Hellscream. The power of this card derives from your lifepool, dealing 3 damage is just insane value but you have to be careful and don't drop too low on health. This is the controlish aspect of the card and a nice addition to the game. The strategy to drop yourself low on health and then gain armor is very risky tho, but if you manage then you have almost a Flamestrike in your hand for 2 mana, which is pretty gooood!

As soon as i get 25 upvotes i'll do a mulligan guide and card replacements.

I have managed to climb from rank 6* to 5** today and i am still going to play it through ranks 5-1. Below matchlist and climb ss. 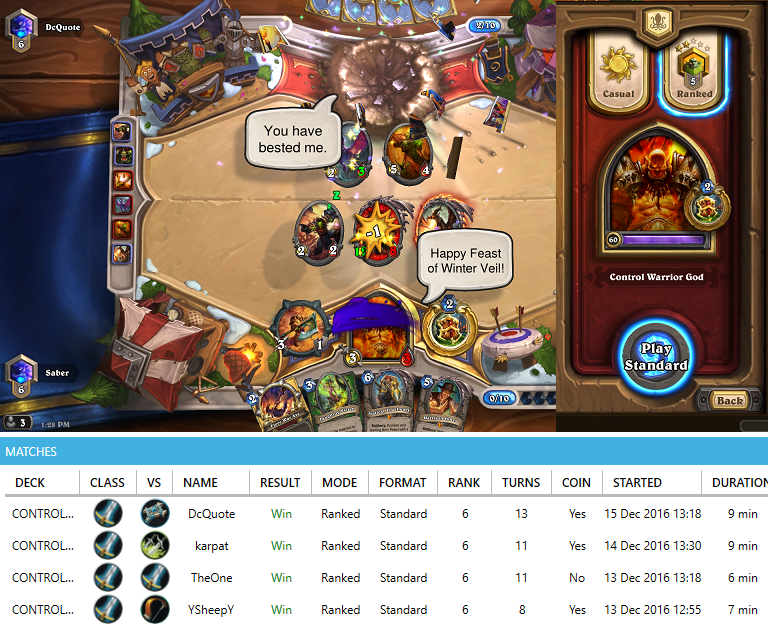 Gonna write a muligan guide and replacements when i reach 20 upvotes.