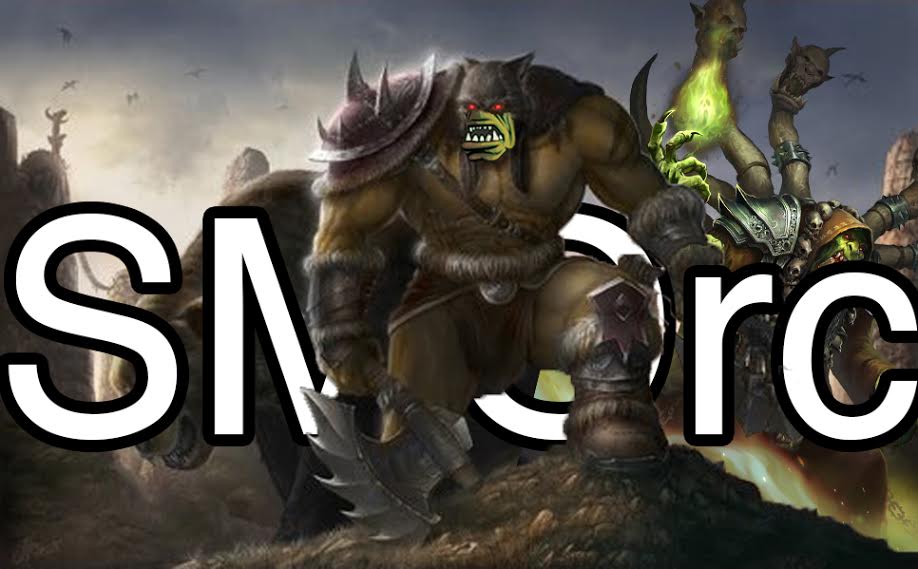 SO WHY IS IT CALLED "EVIL REXXAR", YOU'RE GUL'DAN!

1) Both heroes (Gul'dan and Rexxar) are orcs. Ok, maybe that's a bit racist, but we all know that no orc can resist a good bit of SMOrc here and there (that's where the word comes from after all!).

2) Face Hunter has made a comeback as the most popular Hunter deck, so what stereotype does Hunter hold? The classic SMOrc stereotype, dag-nab-it. Warlock = Evil, Hunter = slightly less evil, so this is a more evil version of Rexxar's Face decks.

3) WHY ARE YOU STILL READING THIS, JUST HIT THEIR FACE ALREADY AND DON'T ASK QUESTIONS.

Who doesn't enjoy a good SMOrc here and there. Well, I can tell you something for sure, Gul'dan has picked up a thing or two from Rexxar recently, and now twists his minions to have one sole purpose: (almost always) HIT FACE!!

If you thought normal discardlock, or the new aggro-secret hunter was fast, well this deck takes both of their speed... AND SQUARES IT.

(Totally Legit Equation) HAVE SOME SCIENCE!

(Win-rate) MAN I LOVE SOME PROOF 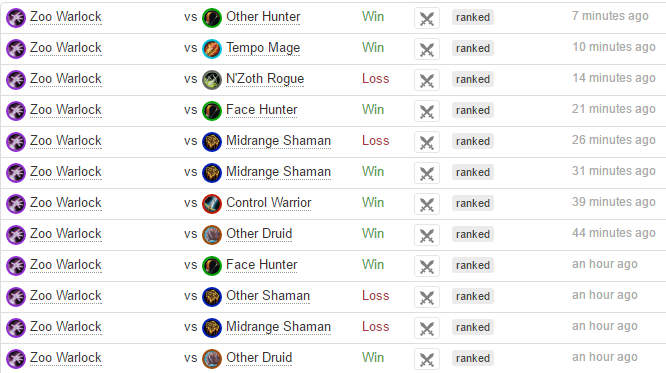 These games took place in ranks 4 and 5.

(Card Choice) CAN SOMEONE PLEASE GIVE ME ALONG WITH A BRIEF EXPLANATION OF EACH AND EVERY CARD IN THE LIST AND WHY THEY'RE THERE?!!?

This card hasn't seen much play since it's nerf, but the battlecry is still powerful enough for it to be coupled with Argent Horserider, or any of the billions of minions you control at any given moment.

1 mana 3/2 with a battlecry that isn't relavent until a minimum of about 8 turns later. In this deck, playing until turn 8 is only a myth.

I mean, the entire deck is built around this card more or less, the synergies with Soulfire, Darkshire Librarian, Silverware Golem, Fist of Jaraxxus and Doomguard, you know, half the deck.

Turns out 1 mana deal 4 damage is preeeeeeety good, especially when you constantly have a board full of useless small minions for it to synergize with.

Hey Look, Power Overwhelming, except it can go through taunts, doesn't require any minions, and can on occasion summon a 3/3 or deal 4 extra damage to a random enemy (See the bargains below)!

It protects your other minions so they too can go face, and live to tell the tale for approximately 1 extra turn. And for only 1 mana?!?!?! Taunt is cheating!

If there's any card that I was first confused about being in zoolock, it would be this fella. Not only is he a cheap minion, but you can think of him as a 2 or 3 drop, due to your ability to play him and the 1 drop immediately after.  The mana split among 2 bodies means that it's tougher for the opponent to remove the threats. Also you can pick up Power Overwhelmingor Soulfire, Netting 4 extra damage FOR 1 MANA.

Thank God it's not a 2/3 otherwise you'd loose 1 damage every time you'd SMOrc! The synergy with Malchezaar's Imp often means it nets you 1 card, similar to if you play it with an empty hand. Don't forget the random 3/3 or 4 damage as well (See the bargains below)!

Many people think of this effectively as a 2 mana 4/2, but it's even better. Imagine a situation whereas you have 4 minions on board, and you opponent has Ancient of War. You could throw Dire Wolf in the middle, and trade away all of your minions, starting from inner to outer, meaning the Dire Wolf effectively gave a total of +4 damage, +1 to each minion. So yea, I'll take a 2 mana 6/2 with semi-charge any day of the week (See Dire Wolf Alpha section, below!).

Look, if you play 2 minions it deals 2 damage, before it can even attack. It's like charge. Except not at all... My point is, it's insanely good, alight? Next question, please.

Alright, one of the first things that may come to your head is: why not play Wolfrider? It's the same mana, but more damage! WRONG. (well, kinda wrong.) Yes, it's less damage on the turn you play it, but it's really hard for your opponent to try to remove it. A Wolfrider dies to Ravaging Ghoul, Fireblast, Shapeshift (etc) along with any AOE, whereas with any of those, there is still a 2/1 on the board with the horserider. And guess what that means? 2 More damage to the face, netting you 4 damage where the Wolfrider was only 3. Oh, also it synergies with Dire Wolf Alpha, so enough said (See Dire Wolf Alpha section, coming soon).

And now we come to the single best card in the deck. Imagine it gets hit once; that's a 3 mana 3/5. Twice? 3 mana 4/6. Each split among multiple bodies. Also don't forget the fact that it has 4 health, and considering how most decks have easy ways of dealing 3 damage (Wrath, Totem Golem, Lightning Bolt, Frostbolt, Eaglehorn Bow etc.), It will often get hit at least twice, ensuring its insane VALUE.

Excuse me sir or madam, can I offer you in a 3 mana 3/3? No? Didn't think so. Well lucky for you we have a deal going on until the Hearthstone servers crash, whereas you combo this little guy with any discard card, and you get it for 0 mana. Take that Wisp (and Walmart).

Oh, hang on sir/madam, remember that deal we established with Silverware Golem? Well, I can assure you that the same deal on 4 damage is well worth a look! May I kindly draw your attention to the synergy with Soulfire, whereas the combo deals 8 damage for 1 mana? Take that Lightning Bolt (and Walmart, again).

END OF THE BARGAIN SECTION

LEEEEROOOOO- oh wait, what is this, Leeroy Jenkins but with 1 less attack!?!?!??! How are you supposed to SMOrc with some garbage like that!? Oh wait, it doesn't give your opponent 2 whelps. Oh wait, it has 5 more health. Oh wait, it can summon a free 3/3 or deal 4 random damage (see bargains specified above).

This deck is a variaton of zoolock, meaning so is your playstyle. Normally on turns 1-4, your sole purpose is to lock down the board via efficient trades using your unimportant minions, but buffed up with your other cards. Afterwards, you want to keep heavy pressure on your opponent, dropping their health every turn.

(Approaching Certain Matchups) "This hunter is SMOrcing me too, what do I do?"

Most control decks don't run too many minions, meaning you should develop your minions ASAP. Often the best starting turns are to coin out two 1 drops on turn 1, followed by a 2 drop the next turn, and keeping the pressure on from there. Don't overextend, if you have a single card in hand and 6 minions on board, save the card, chances are it will die as no more than a pretty face to their AOE. Wait until they clear the board, THEN play it.

Believe it or not, this matchup is a war for the board. The person with the most minions can trade away the opponent's minions with ease and continue to snowball themselves, which is why it's important to almost always trade away their minions. If you have. say, a 5/4 against a 2/1, don't trade though, you are still a SMOrc deck at heart, just be smart.

(Using Discard) "WHY DOES MY Soulfire KEEP DISCARDING MY Doomguard F'SAEAWEGSAEFJKSLER"

Honestly, this deck really can't be substituted easily. Obviously, the main focus is the discard package (Malchezaar's Imp, Soulfire, Darkshire Librarian, Silverware Golem, Fist of Jaraxxus, Doomguard), which requires much of Karazhan. So if you don't have Karazhan, you might as well play regular zoolock. As far as the rest of the cards, they're all really cheap to make (not a single epic or legendary), so just save up some dust and you'll be there before long!

**IMPORTANT**
(Board Setup) "KNIFE JUGGLER WHAT ARE YOU DOING, LET THE LIBRARIAN GET THE DIRE WOLF BUFF TO TRADE!" 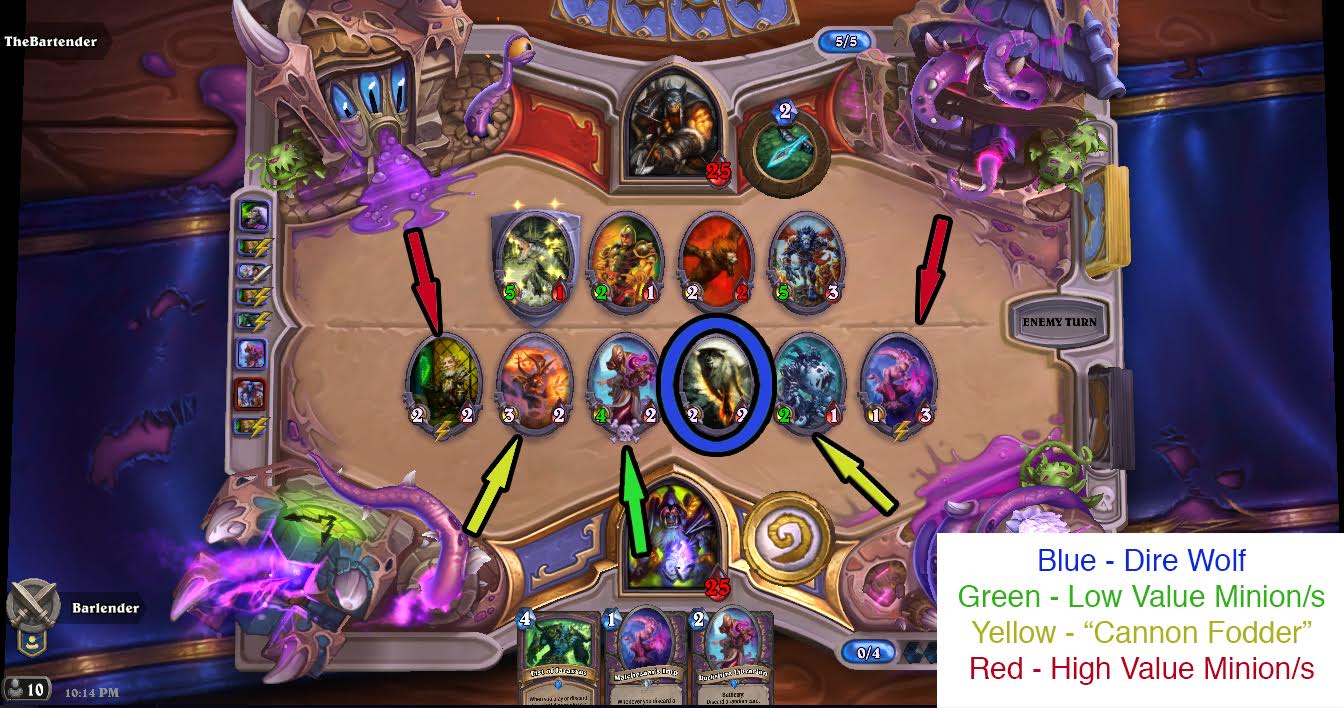 When positioning minions, always think of their relationship with Dire Wolf Alpha, because often something as simple as the a Flame Imp being on the wrong side of the Knife Juggler leads to the loss of a game.

Outer to Inner
First of all, always try to place the Dire Wolf in the center, so a relatively equal number of minions are on both the left and right of it, meaning that when one dies, it can "pass" it's +1 buff onto the next minion. Always place "HVT minions" on the outside of the board. These are generally minions with effects that you want to keep a hold of, such as Knife Juggler and Malchezaar's Imp. Also try to place minions with high health, such as Doomguard, on the outside, because it's harder for them to die and actually pass the buff along in the first place. Inside of them, place the "Cannon Fodder" minions. these are minions with no useful effects, only stats which can be traded away with (or hit face, of course). Try to position low value minions directly adjacent to the Dire Wolf Aplha, such as Darkshire Librarian, since you want it to die first, and draw you a card.

Dire Wolf Alpha and Argent Horserider
First, play the Wolf, and let it buff two existing minions on the board. AFTER the existing minions get the extra damage in, place the Argent Horserider adjacent to the Dire Wolf Alpha (between the Wolf and the minions that just attacked), so that it also gets the buff that turn. Effectively, the Wolf gave +3 damage in a single turn, where it otherwise would've given only +2.

Dire Wolf Alpha and Possessed Villager
Contrary to what you may think, Possessed Villager should be placed in the "HVT Minion" section. The reason is because if it is near the center of your board, it would get buffed and traded away, yes, but the 1/1 it summons would  take the position of the Villager, meaning it would prevent the passage of damage from reaching the next minion (since it has to wait another turn to attack). If you know that the Villager will die before the Wolf is played, then by all means place it near the center, so that the 1/1 it spawns can be buffed. Otherwise, keep it in the outer ring.

TL;DR: Look at the pretty picture.

Thanks so much to everyone who did coverage on the deck. I know it's cheesy and cliche, but it really is awesome to see such positive feedback to the deck, I really appreciate it! Also thanks for just looking at the deck (and making it this far through the guide)!

There you have it! Aggro Discardlock (AKA Evil Rexxar). Remember to get out there and spread some cancer, preferably for you opponent, but I can't guarantee you won't contract it as well.