Hi people. This is a priest deck based on summoning/resurrecting big minions while controlling board with spells.

Power Word: Shield (2x): No need to explain, our only drawer in this deck. Just don't use this on an enemy minion when you think there's nothing else to do. It's not a good idea.

Resurrect (2x): Well, this is clearly our key card. Nothing feels better when you summon a Ragnaros for 2 mana.

Shadow Word: Death (2x): Mid/endgame remover. Just a tip save your entombs for big deathrattle minions (like tirion, sylvanas, cairne) and use this on other ones (like ragnaros, alex, grom)

Thoughtsteal (1x): While we don't have good enough drawing mechanics (cos we unfortunately can't use Northshire Cleric in this deck) this card help us to have a solid hand. Also sometimes can steal the best cards from your opponent.

Shadow Madness (1x): I've seen many people complaining about this spell can turn things bad by making the stolen minion resurrected. Yes, ofc that's a possiblity but believe in me there will be some situations this card will totally make you control the board control. You will probably kill two good enemy minions for only 4 mana. And while we will mostly use this spell against aggro decks, you'll probably kill and get one of their key minions (like Sorcerer's Apprentice, Flamewaker, Imp Gang Boss, Totem Golem etc.)

Excavated Evil (2x): Good aoe card. Especially very effective against shamans and zoolocks. Totally clears their board. And even this goes to opponent's deck it's not such a problem cos our minions have more than 3 hp.

Entomb (1x): No need to explain. Especially can make you win the game against control decks. While deathrattle legendaries like tirion, sylvanas are best targets for this, you better keep one to steal legendaries with 4 attacked like Ysera, Malygos. Cos they can make huge trouble for you while priest has no other spells vs any 4 attacked minions.

Priest of the Feast (2x): Another no need to explain card. This one saves your ass against all those aggro decks. Buffing this with a shield makes it a 3/8 body which can make you pew pew some heals for many turns. Once i had 18 heals in a single turn while i had two of this on board. This can make some of those pretty shamans, locks and hunters instant concede.

Onyx Bishop (2x): Resurrect in human form. This dude can be crazy. Lets check matematically. When this one summons an arcane giant for you it's a 11/12 body in total for 5 mana.

Injured Blademaster (2x): [card] One of the best minions to resurrect. 4/7 body for 2 mana is really op.

Barnes: I call this Commander of the deck. Barnes himself can make you win the game. Yeah, if he summons a ragnaros and if you manage to resurrect another with full hp on the next turn, you'll most likely win. Resurrecting 2x raggy is instant win. Same almost goes for Confessor as well.

Sunwalker (1x): Maybe this deck is only one around which is seriously good for this honey. She really works so good in current meta with our resurrect synergy.

Sylvanas Windrunner: Hail to the warchief! Another amazing target for barnes and resurrections. Can make you win a game against any type of opponent. Just don't play her if board is totally cleared. It can be a waste.

Bog Creeper (1x): Against all those aggro decks we surely need a taunt which also can be good with Barnes and Resurrect. Sludge Belcher would be the best one but unfortunately he is lost in the wild. So best one for Starndart is this dude.

Ragnaros the Firelord: I call this the best target for both barnes and ressurrect. Cos you'll have a chance to have 2-3 of this dude on turn 5-6 which will totally drive your opponent crazy.

This is a simple guide. General strategy is not to lose board control until turn 4-5, then start to summon, res big dudes. Once you got board control, you'll like 90% win.

If you want to success with this deck, you just can't replace any Priest cards, Injured Blademasters and Barnes. Also replacing other legendaries will reduce the strength of the deck. And please don't ask replacement for taunts Sunwalker and Bog Creeper. They are both very useful in this deck and cheap to craft. So just craft them. 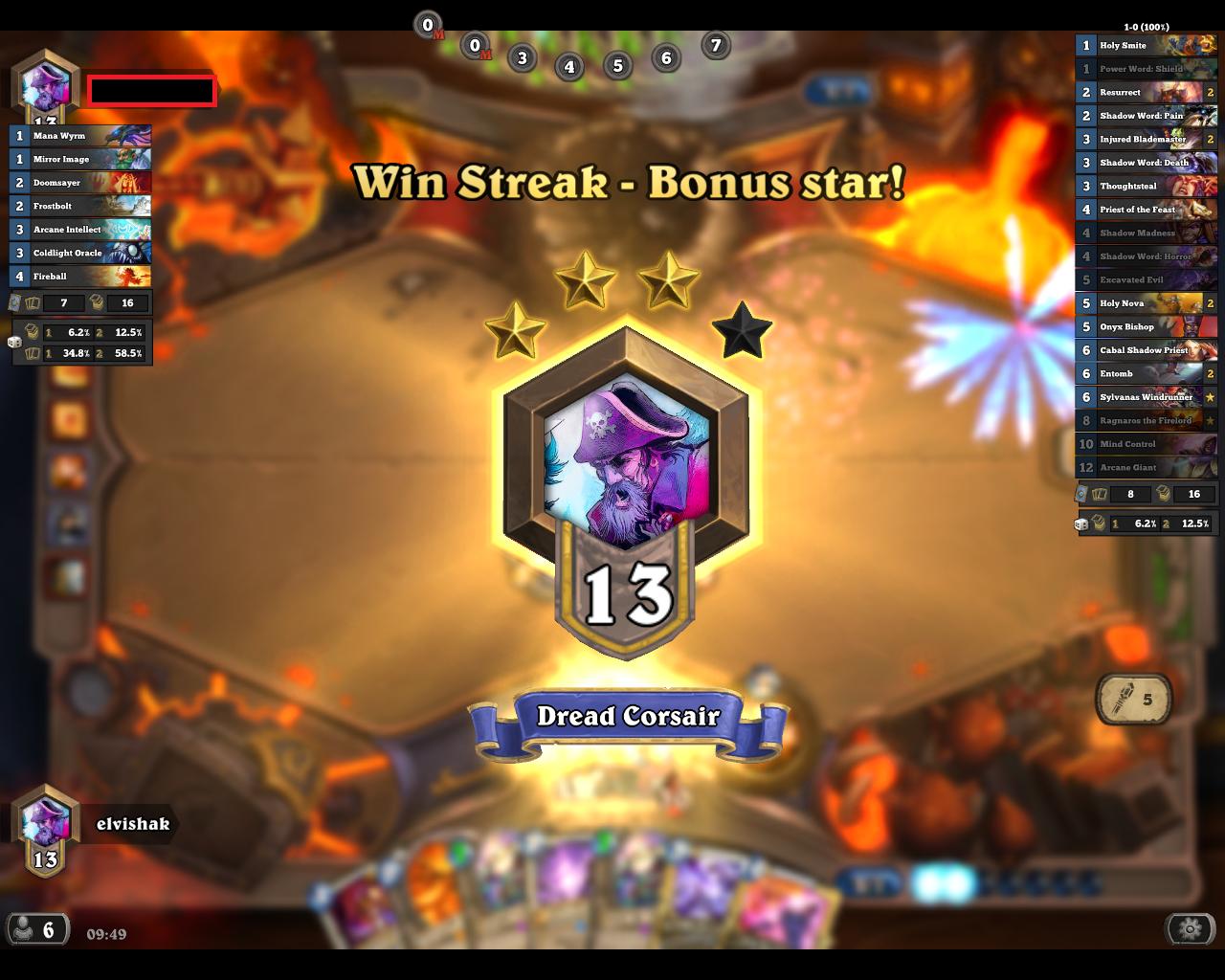 Got some time to play and just climbed to Rank12 defeating a Tempo Mage; 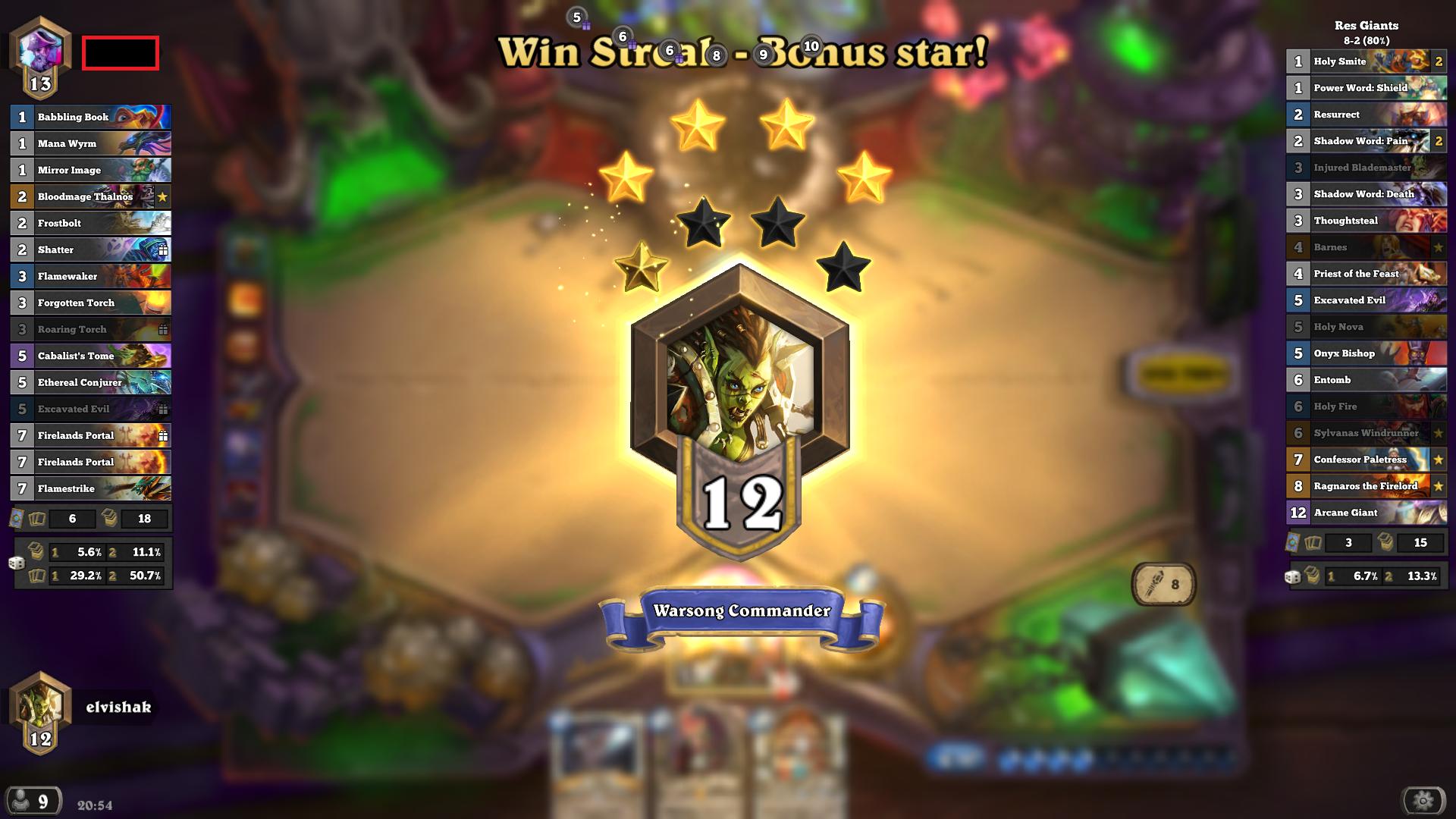 Got to Rank 11 now after defeating another Mage. Seems they have no chance ;) 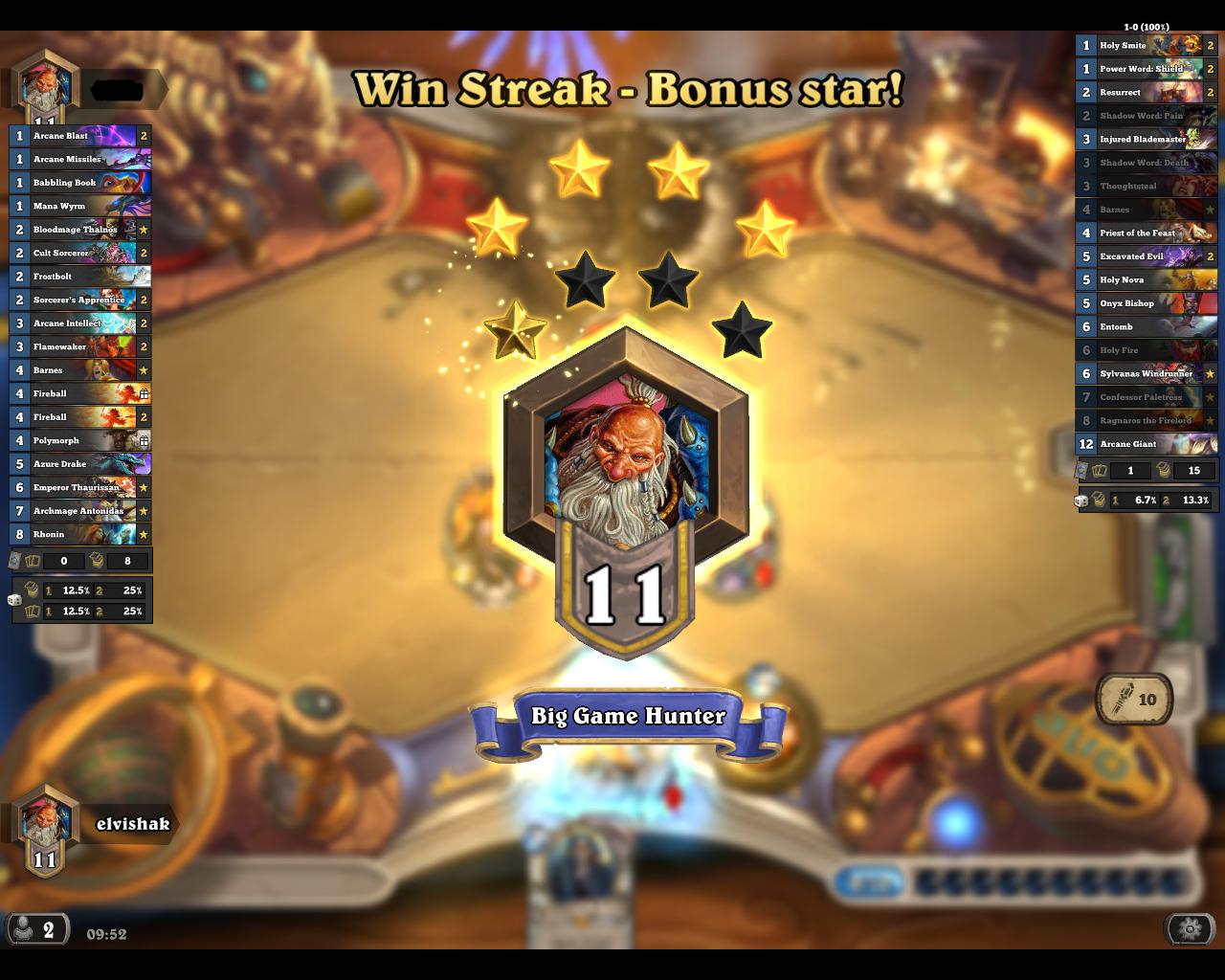 Got to Rank 10 after defeating a Renolock; 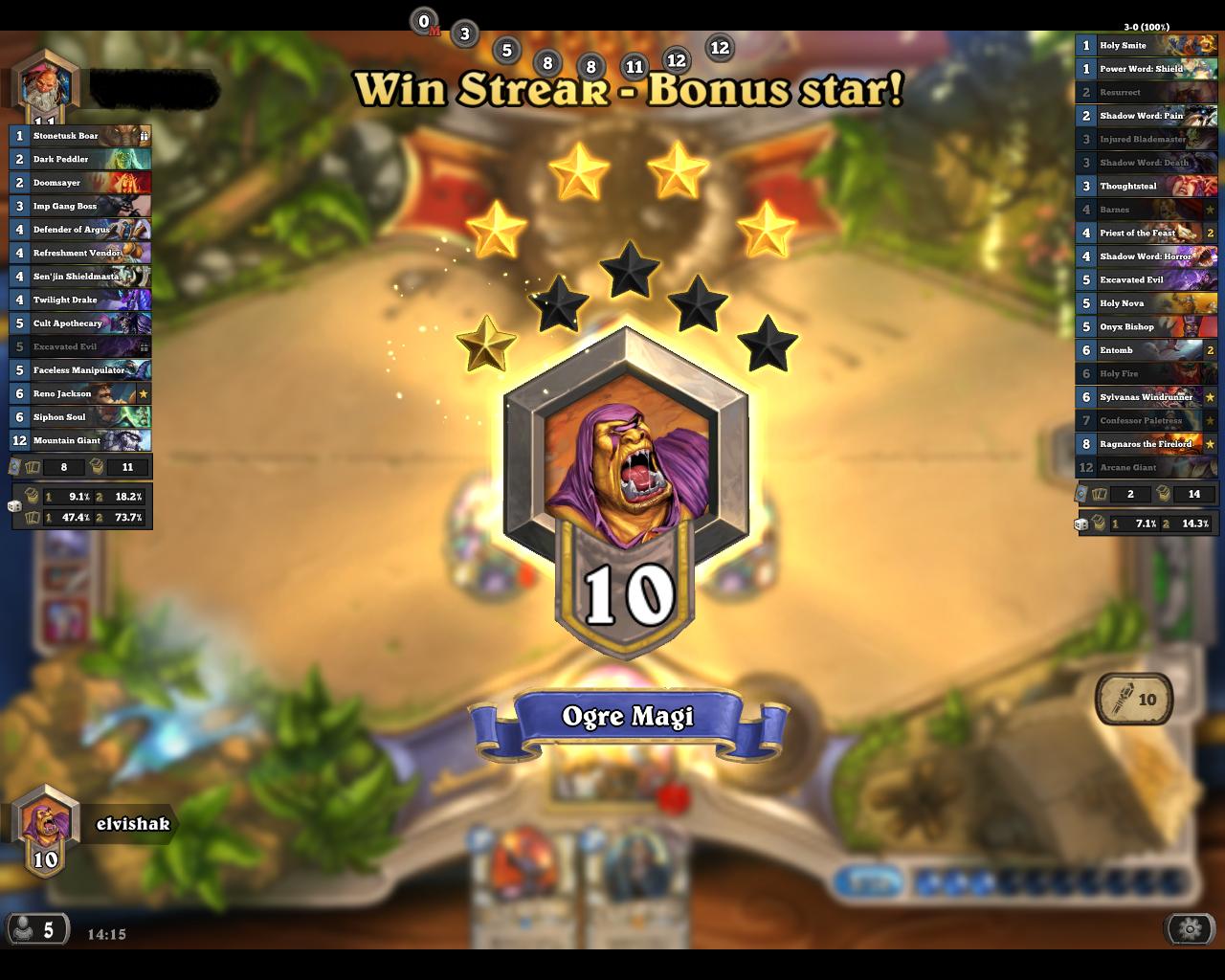 After defeating an interesting kind of an aggro Warrior now i'm Rank 9; 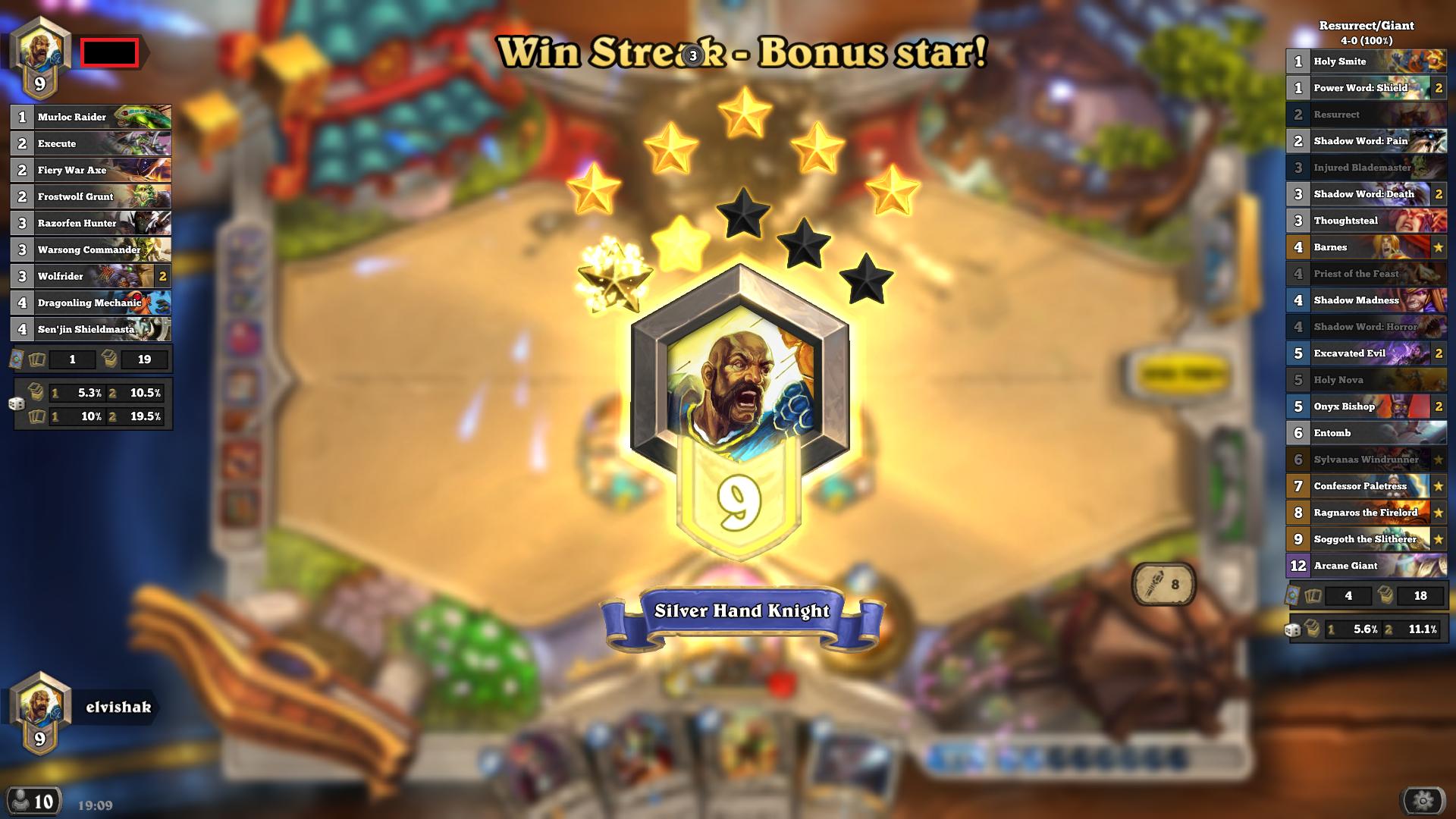 Defeated a Tempo mage and climbed up to Rank 8 now; 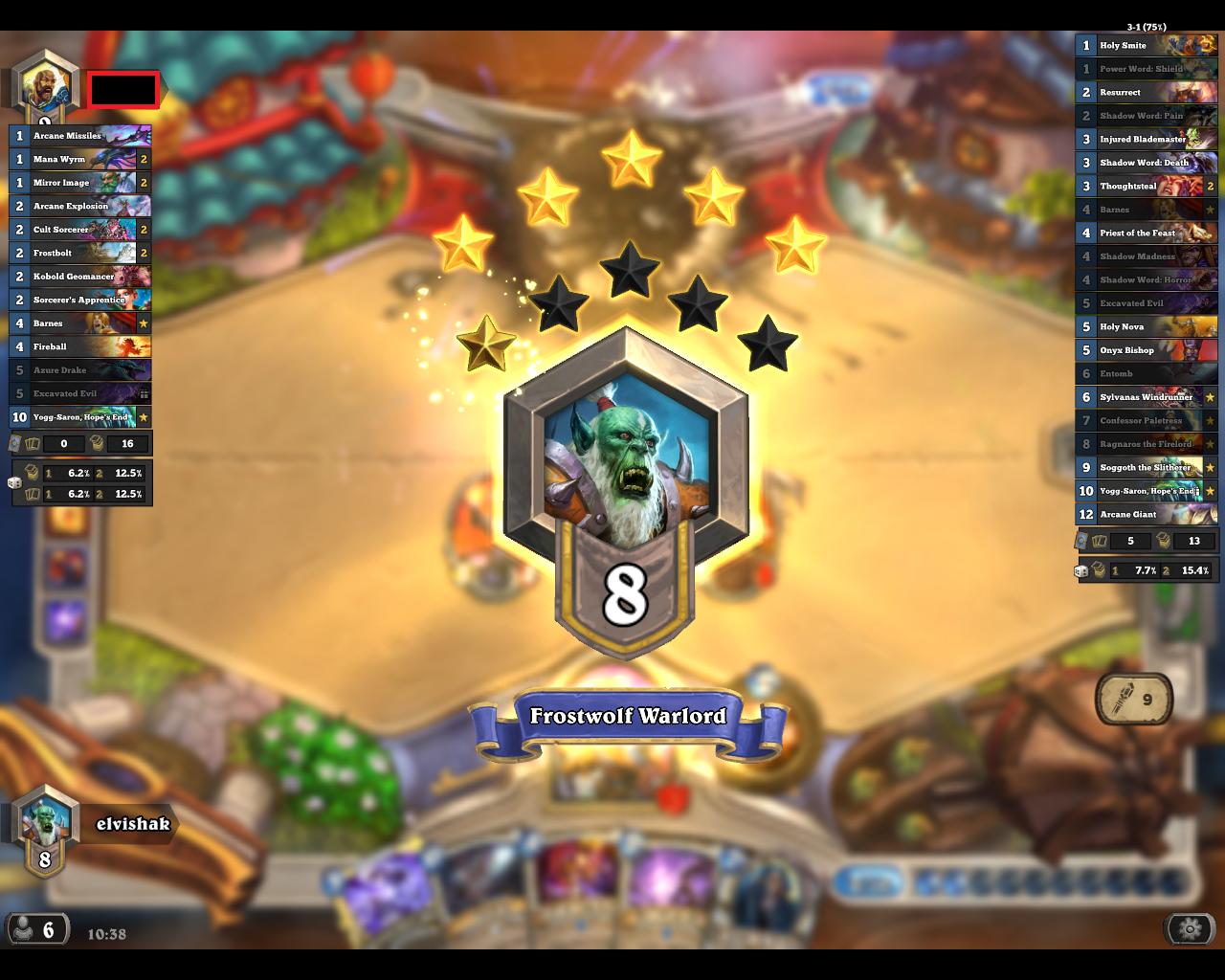 Poor Aggro shaman could only use 4 cards :( Rank 7 now and climbing; 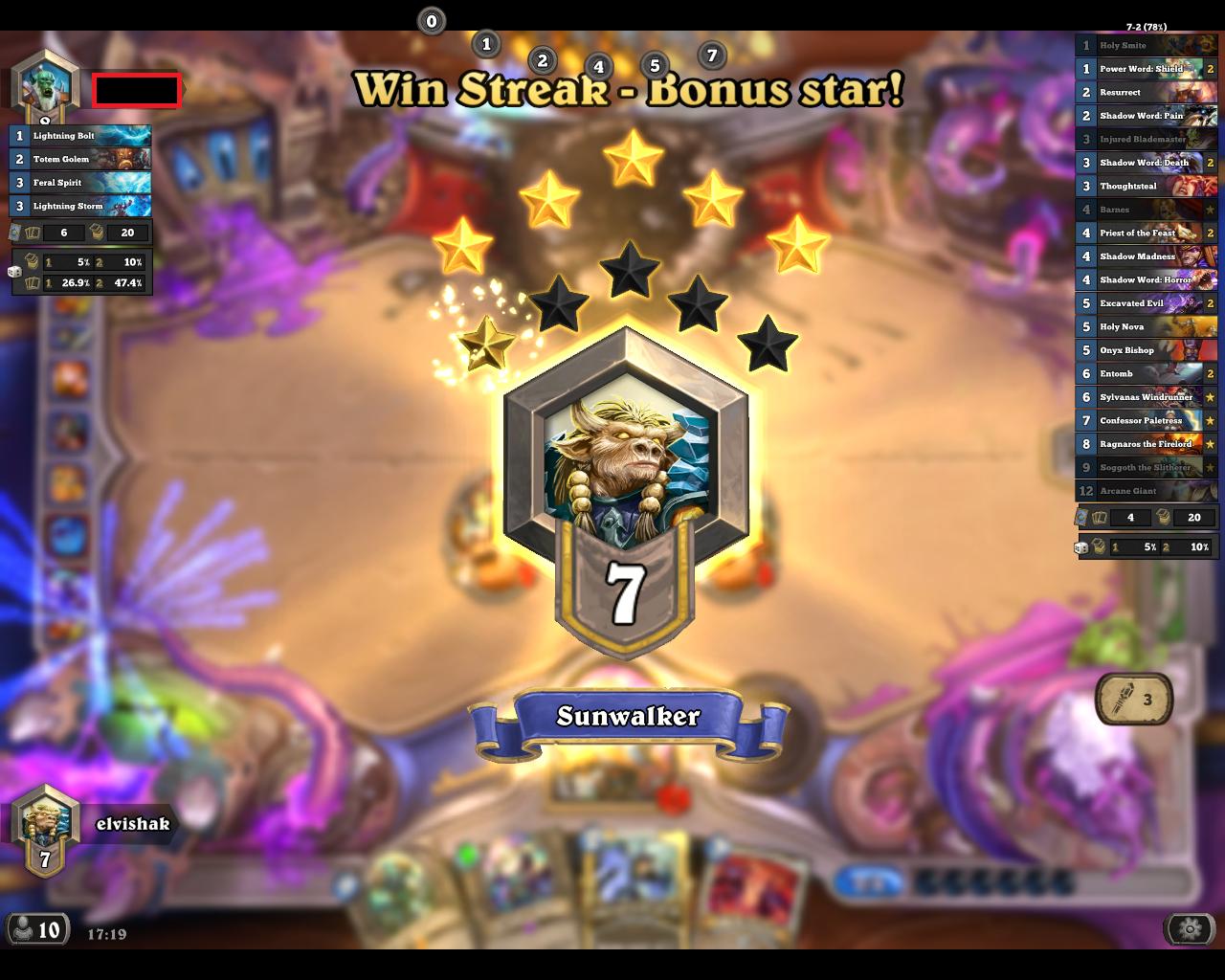 Defeated a Rogue and Got to Rank6 now;

Ok dudes after defeating a Tempo Mage now I'm Rank5! Which means we can call this deck good for laddering; 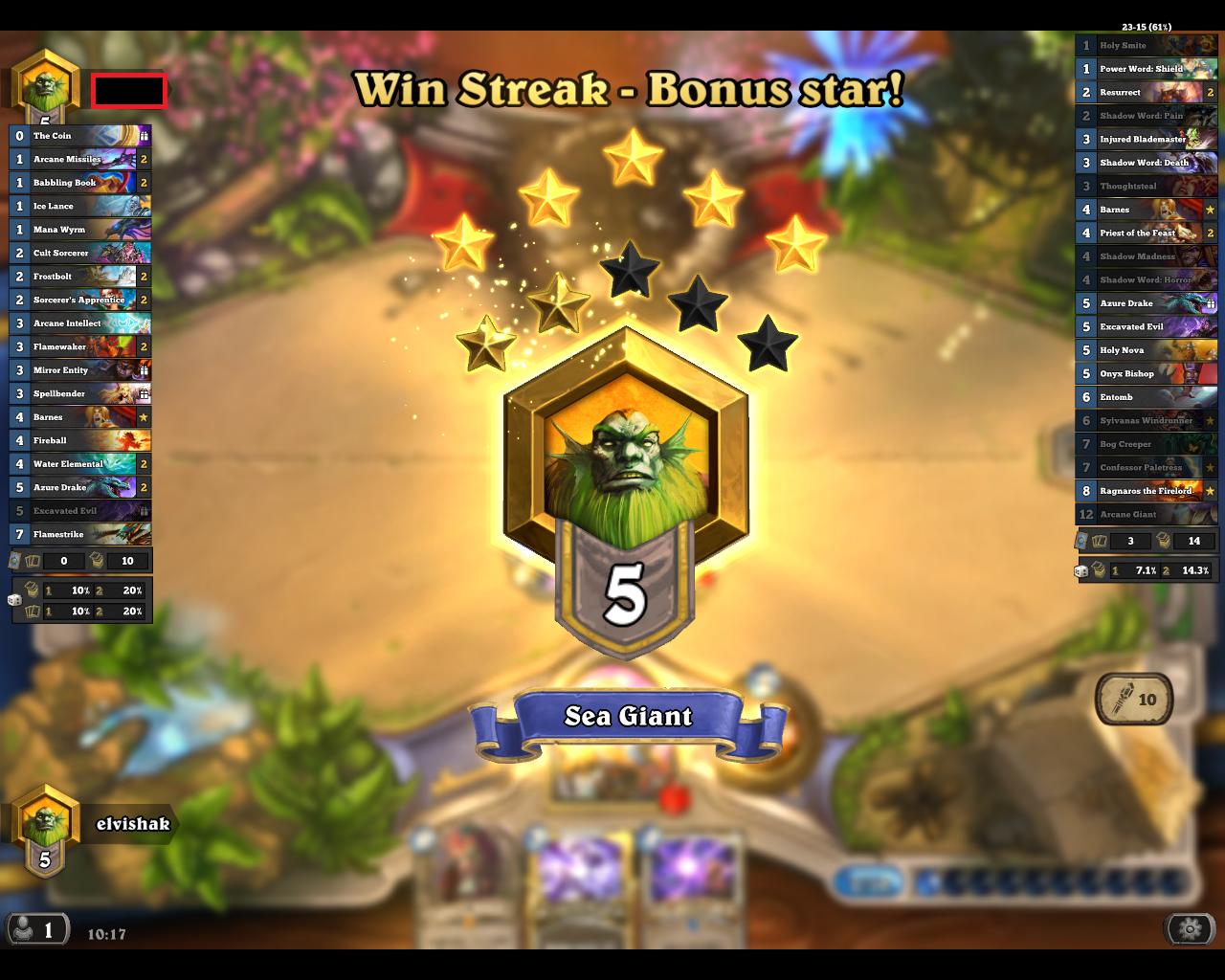 At last got Rank 4 after some meta changes... Lets go for LEGEND now! 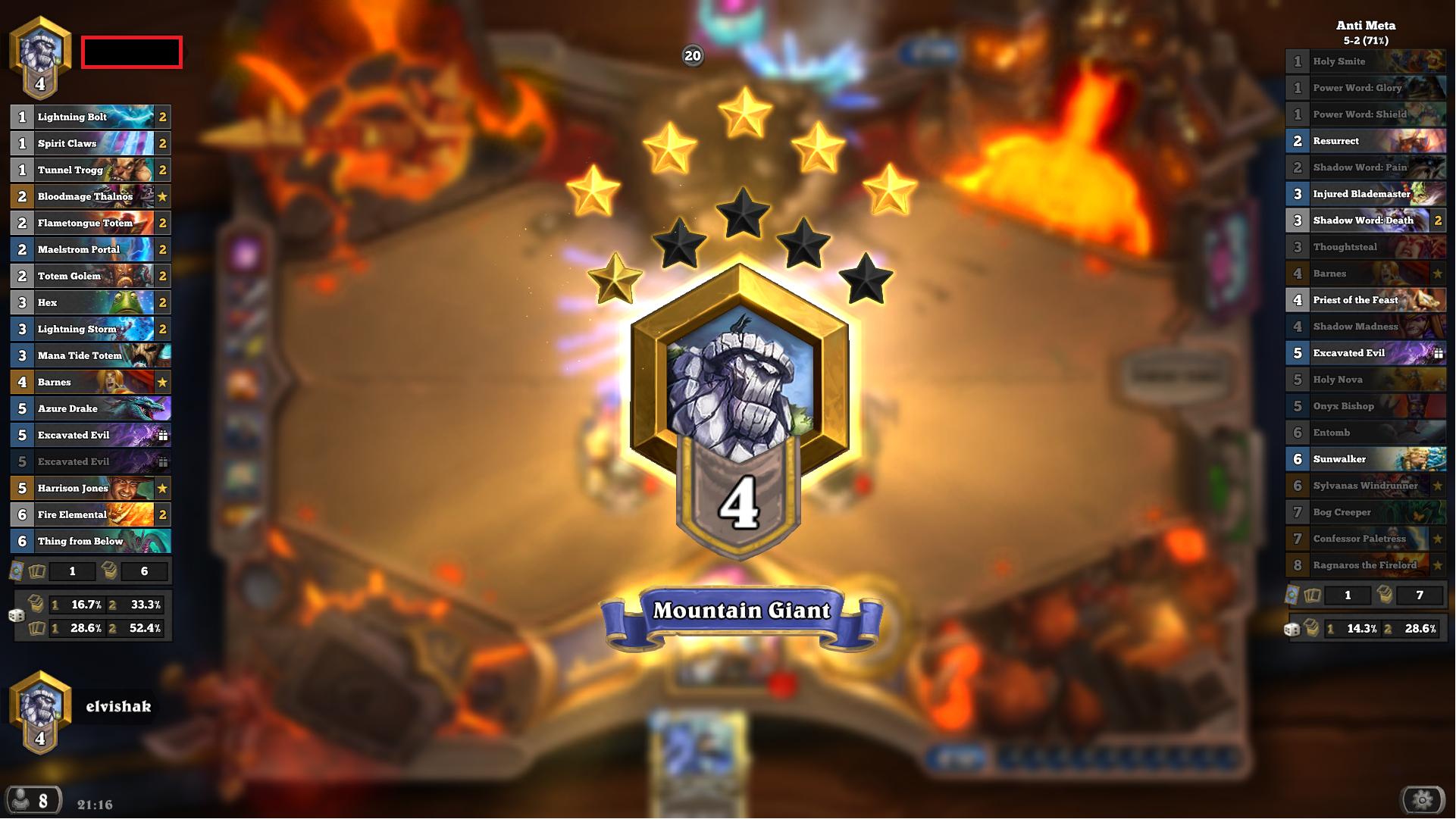 After a victory against a Secret hunter got Rank3 now; 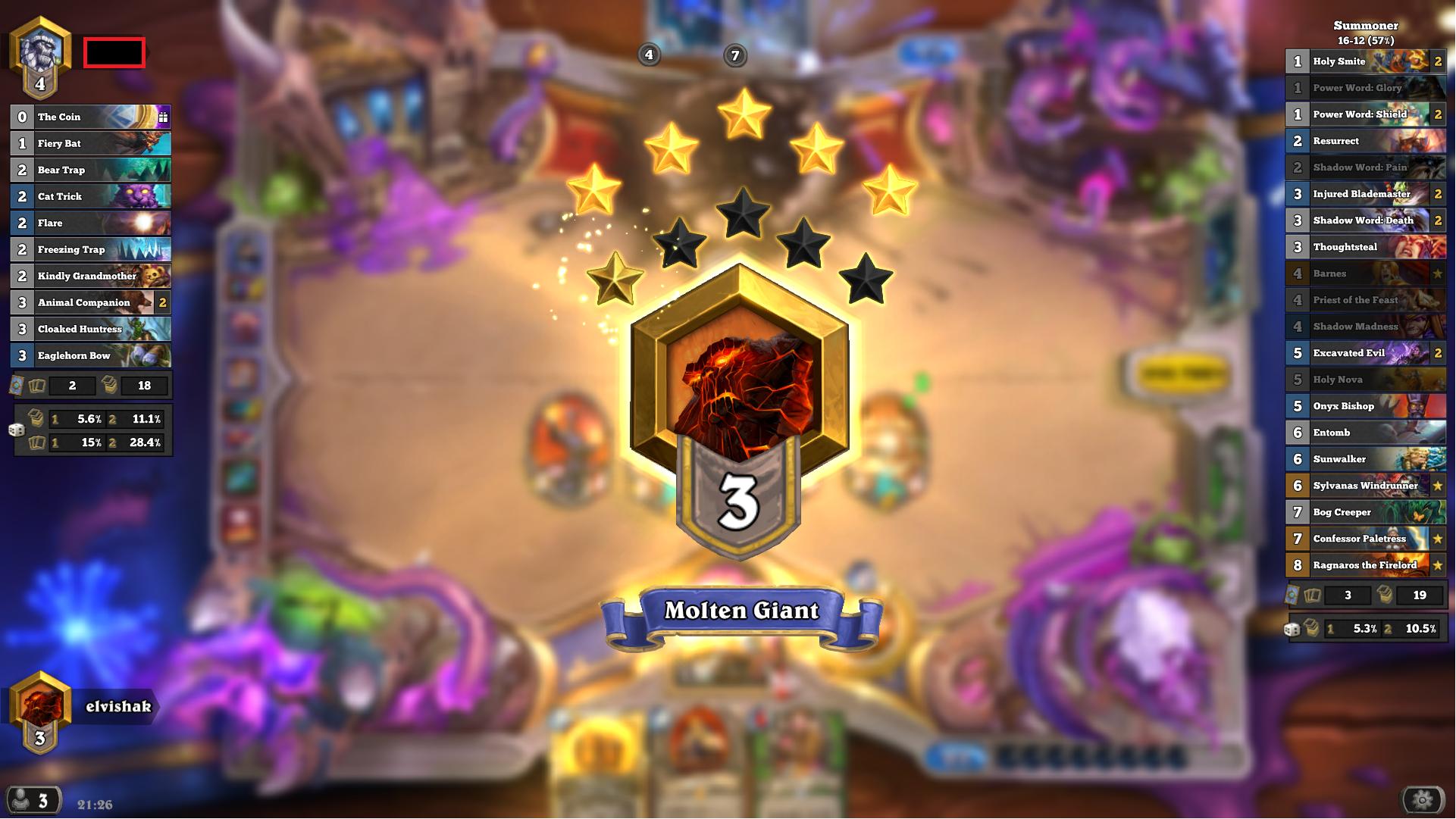 Won against a Zoolock and reacher Rank2 now. Only 2 ranks to go! 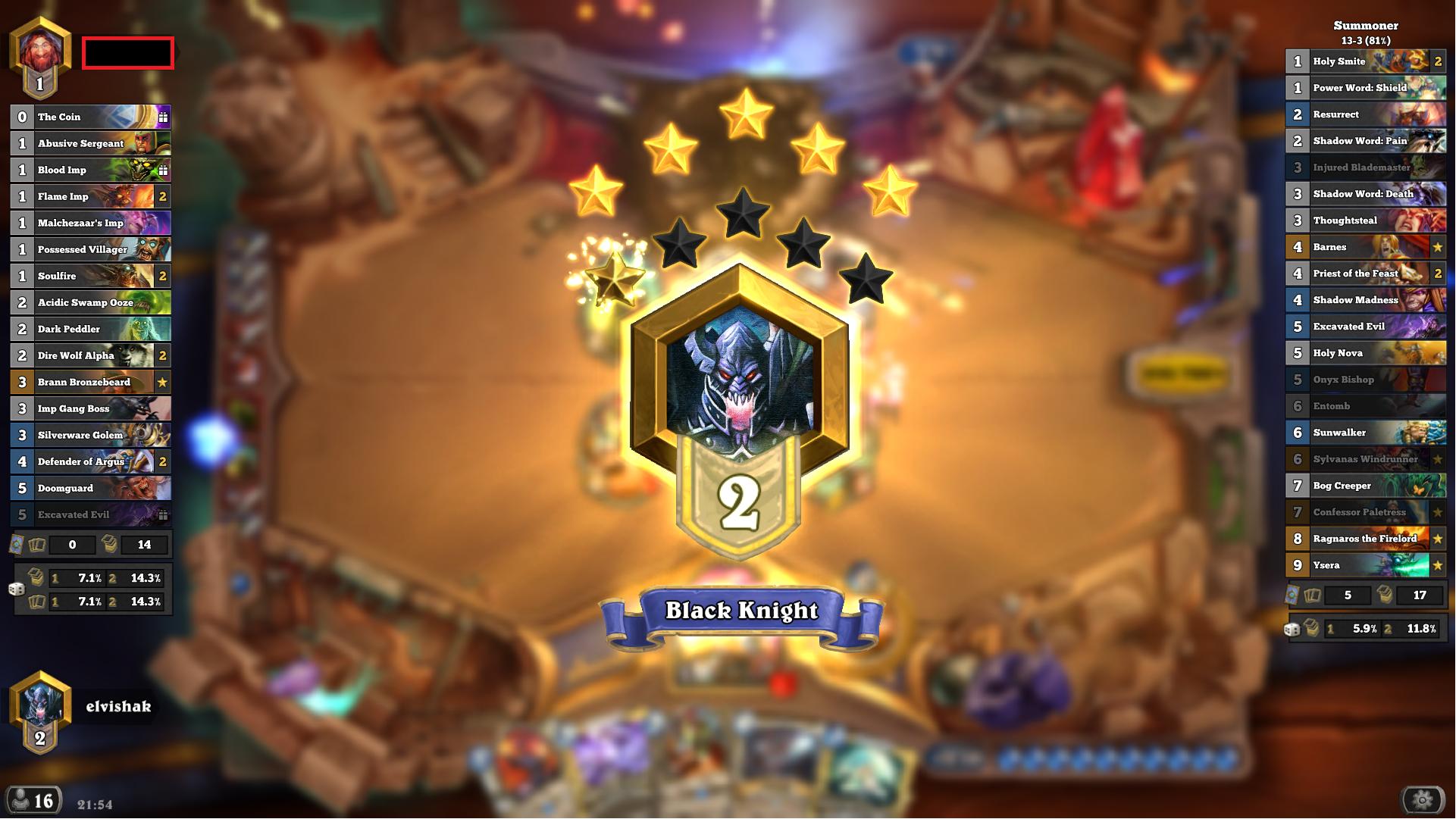 Defeated another shaman and became an inkeeper now. Legend inc? Why not? 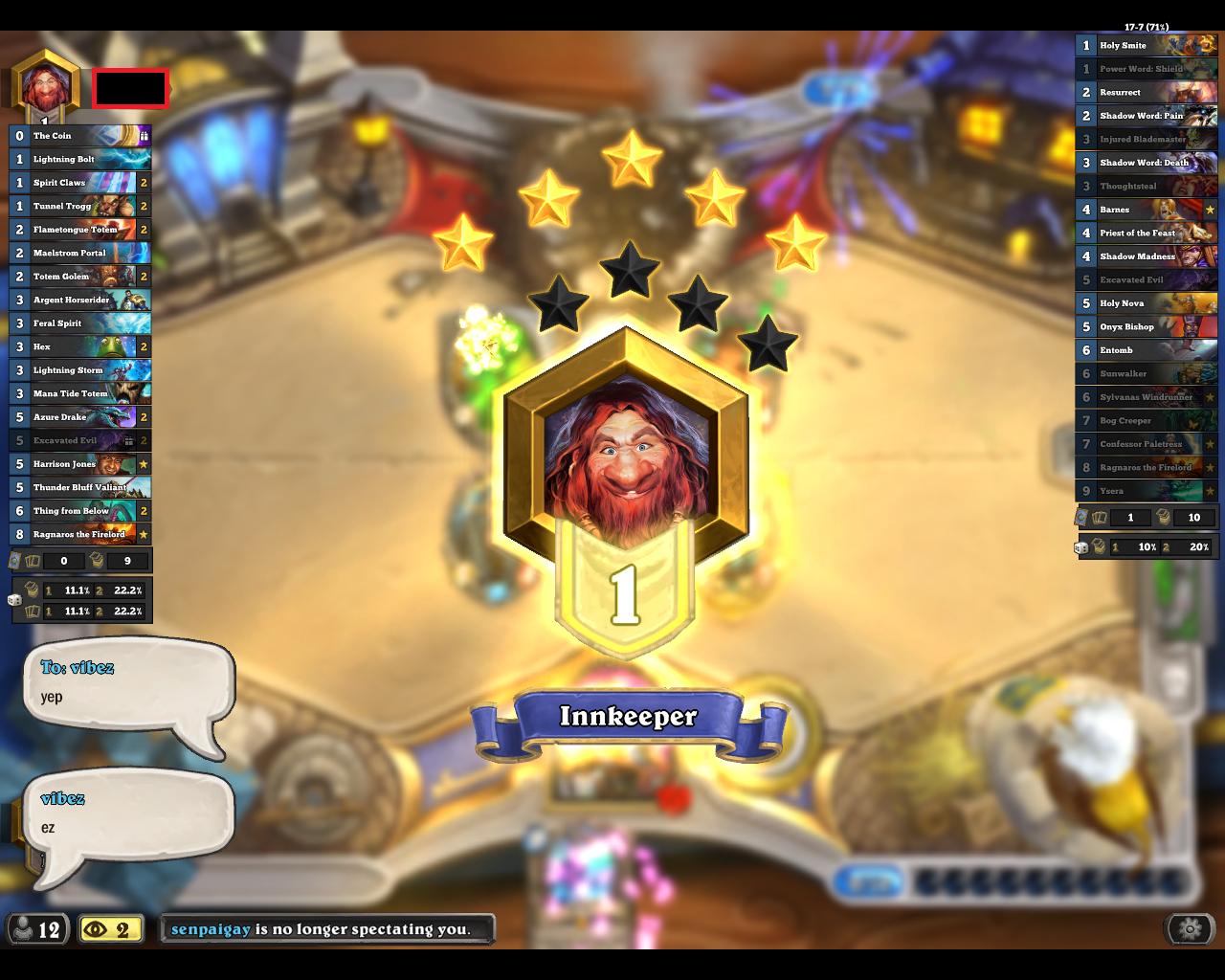 Here is my first time Legend!; 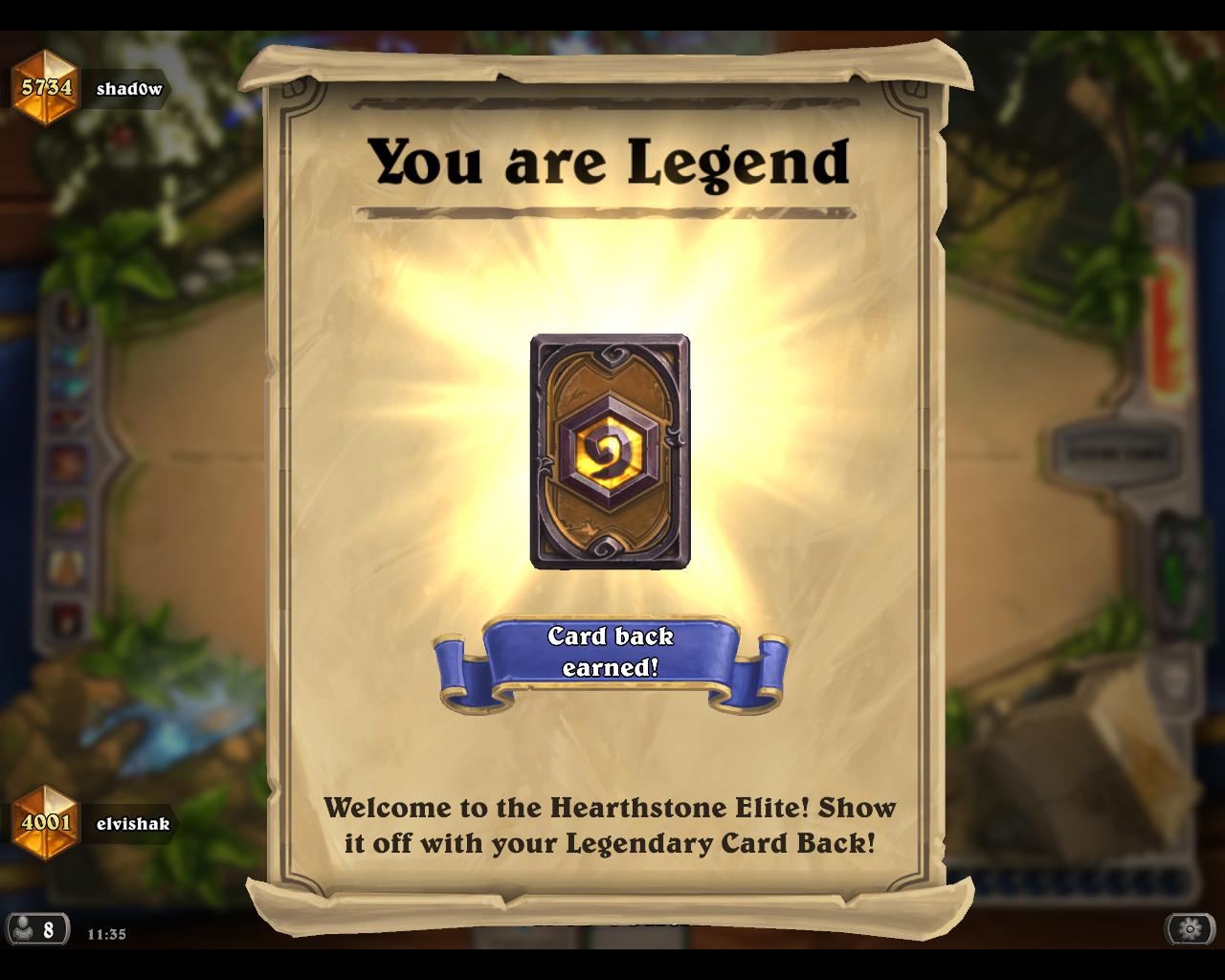 Giants, more giants... This is what happens when you double resurrect two giants, and play another for 2 mana :o 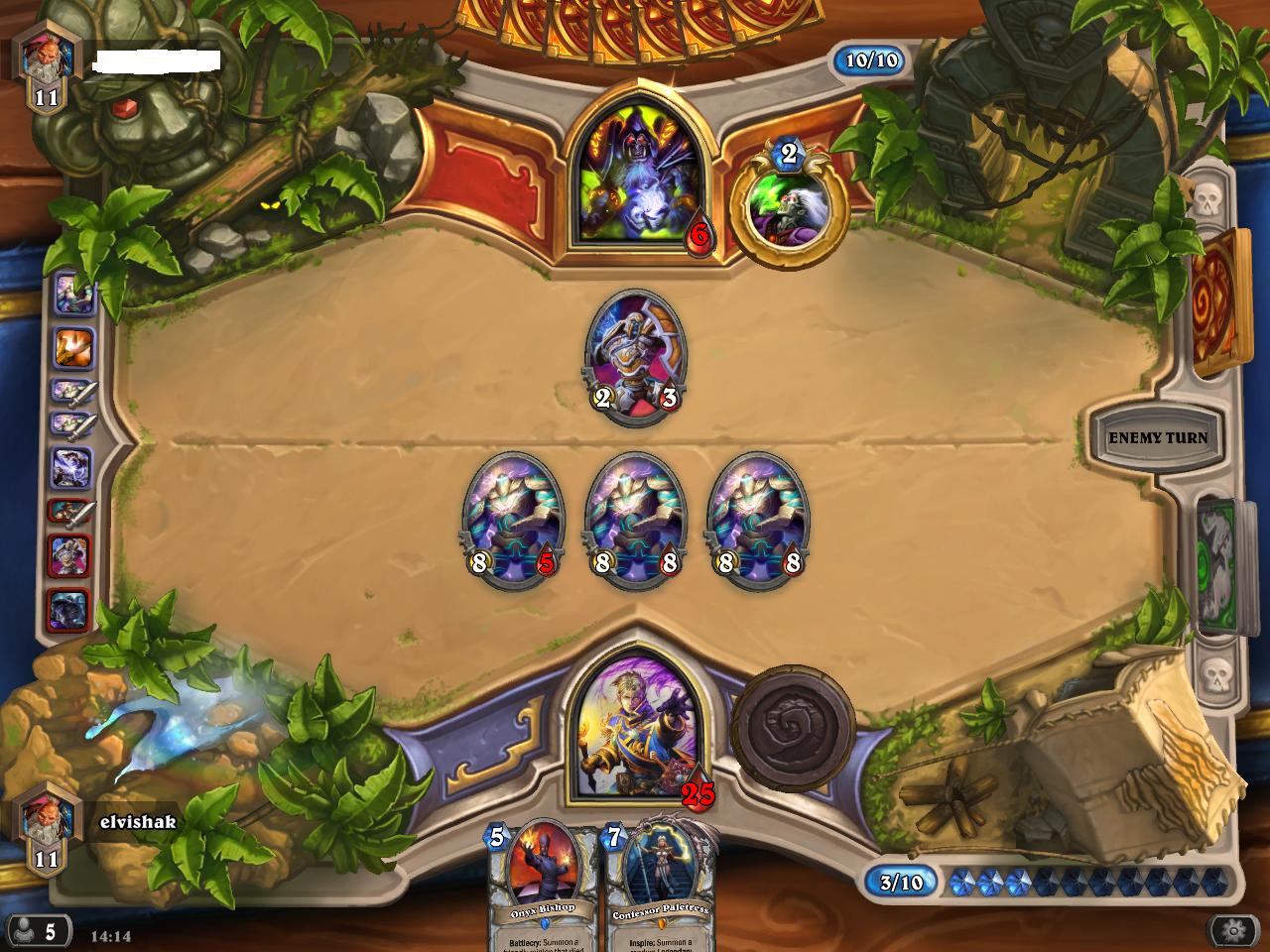 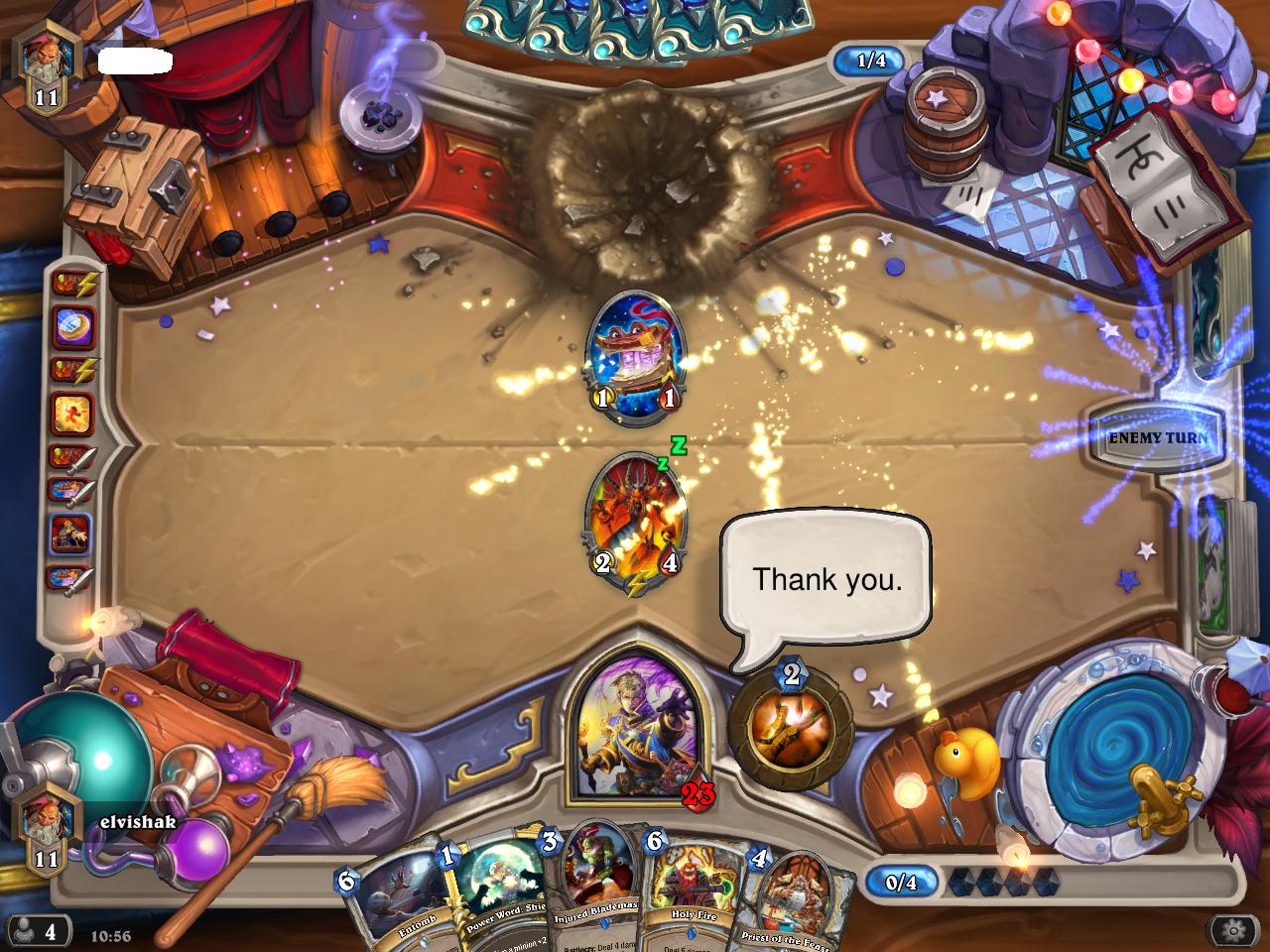 30-0 vs Aggro Shaman. Paletress summons icehowl from ToC and he clears the board. 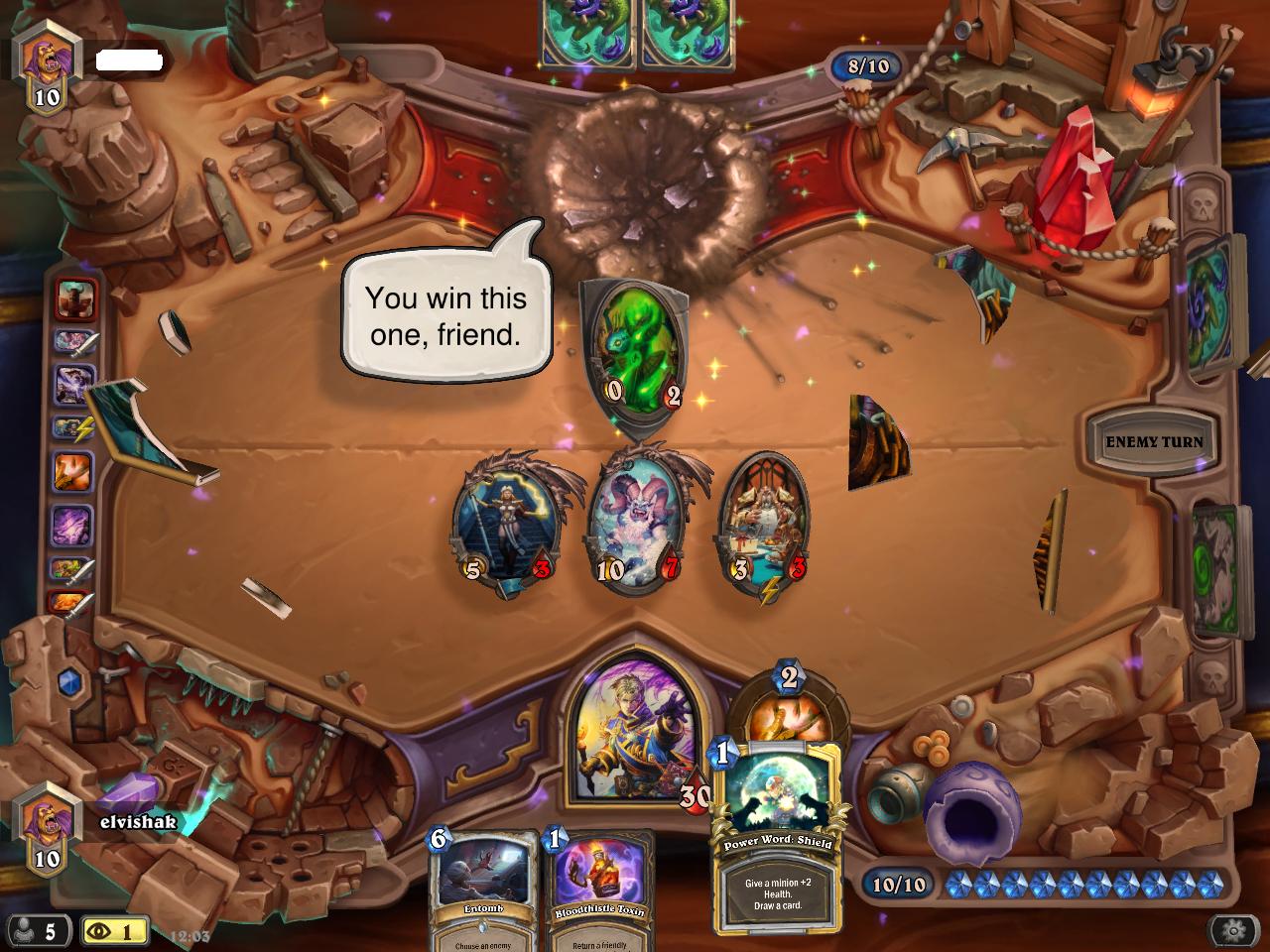 Here is another funny screenie by Qlinx. A nice example for Confessor replacing; 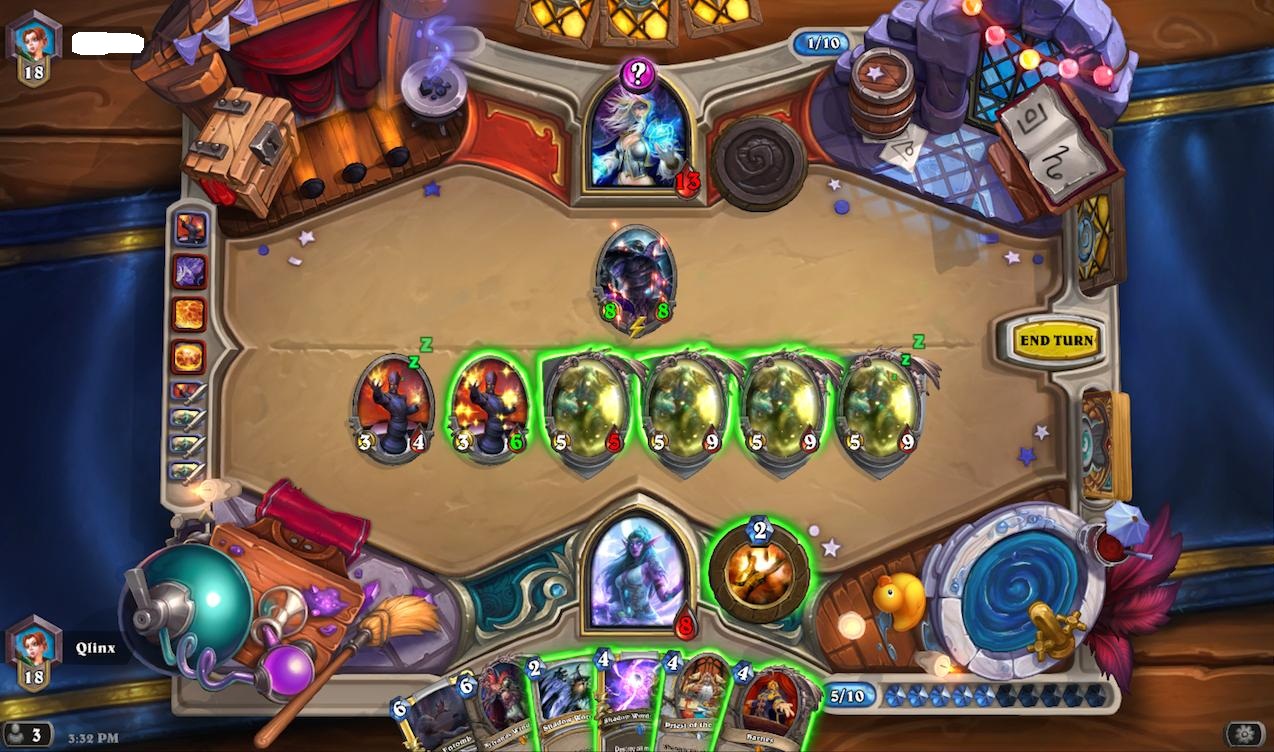 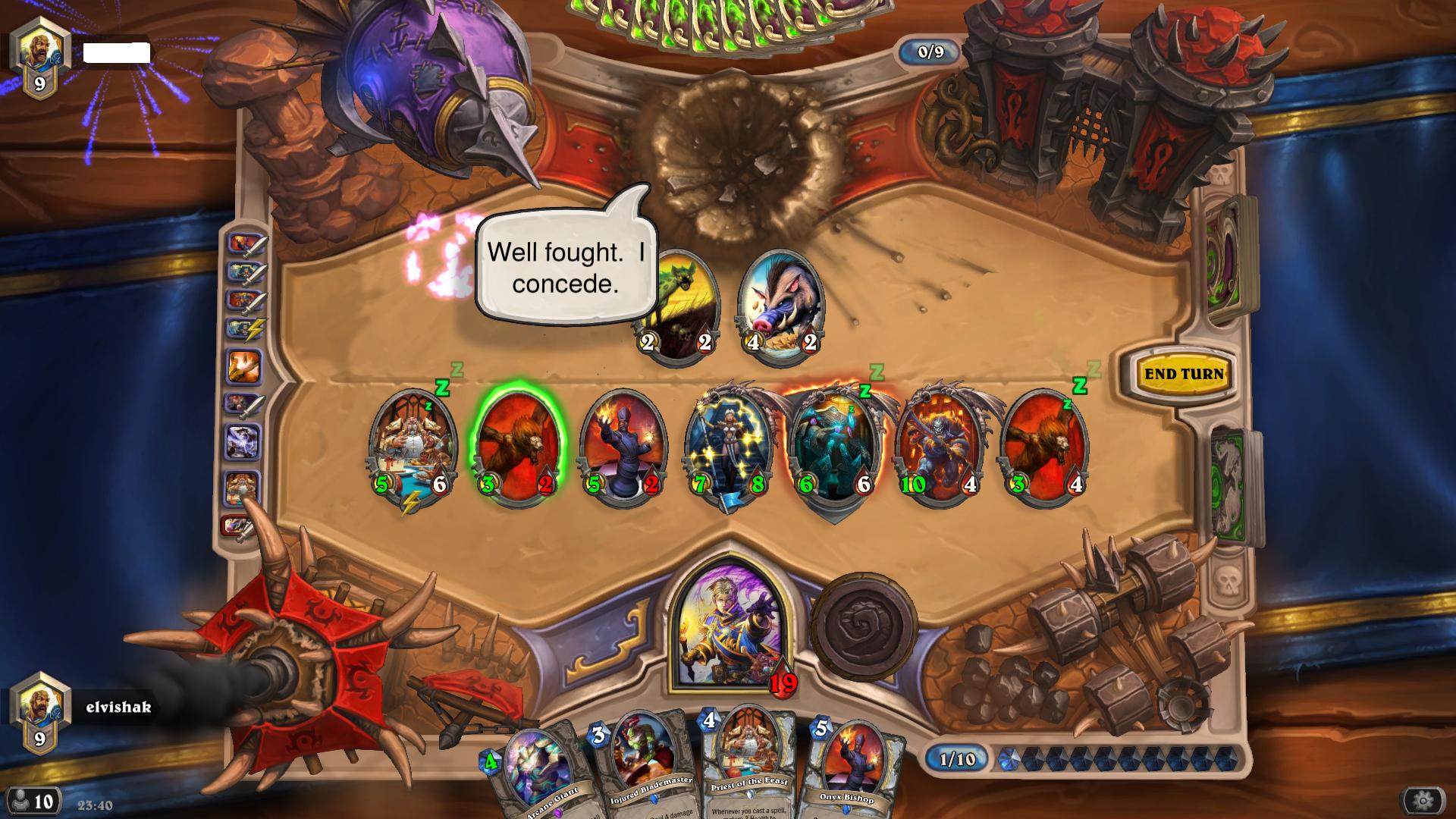 Another example for Paletress Power; 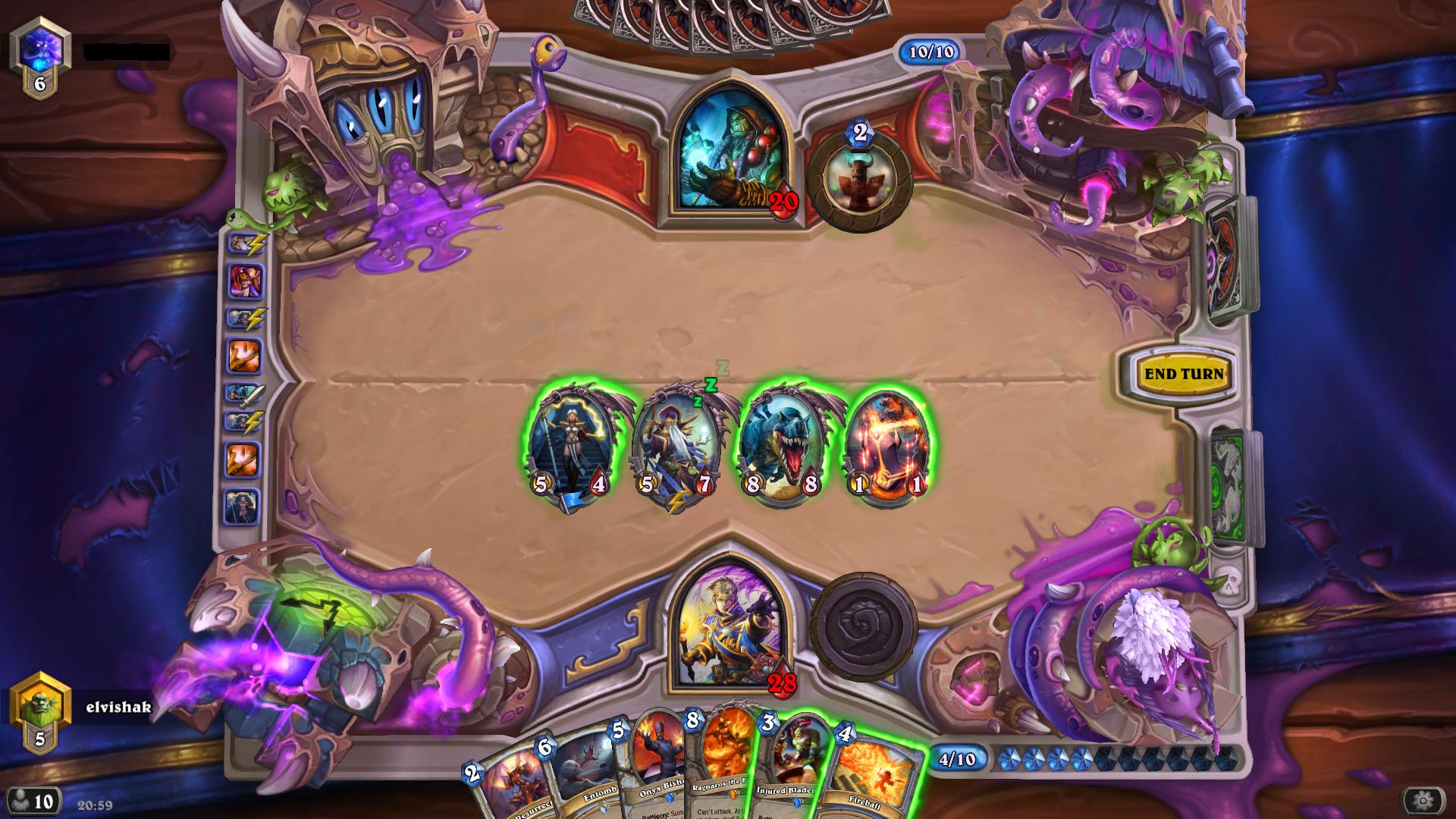 This is what you can do with this deck to those pretty shamans around  ;) 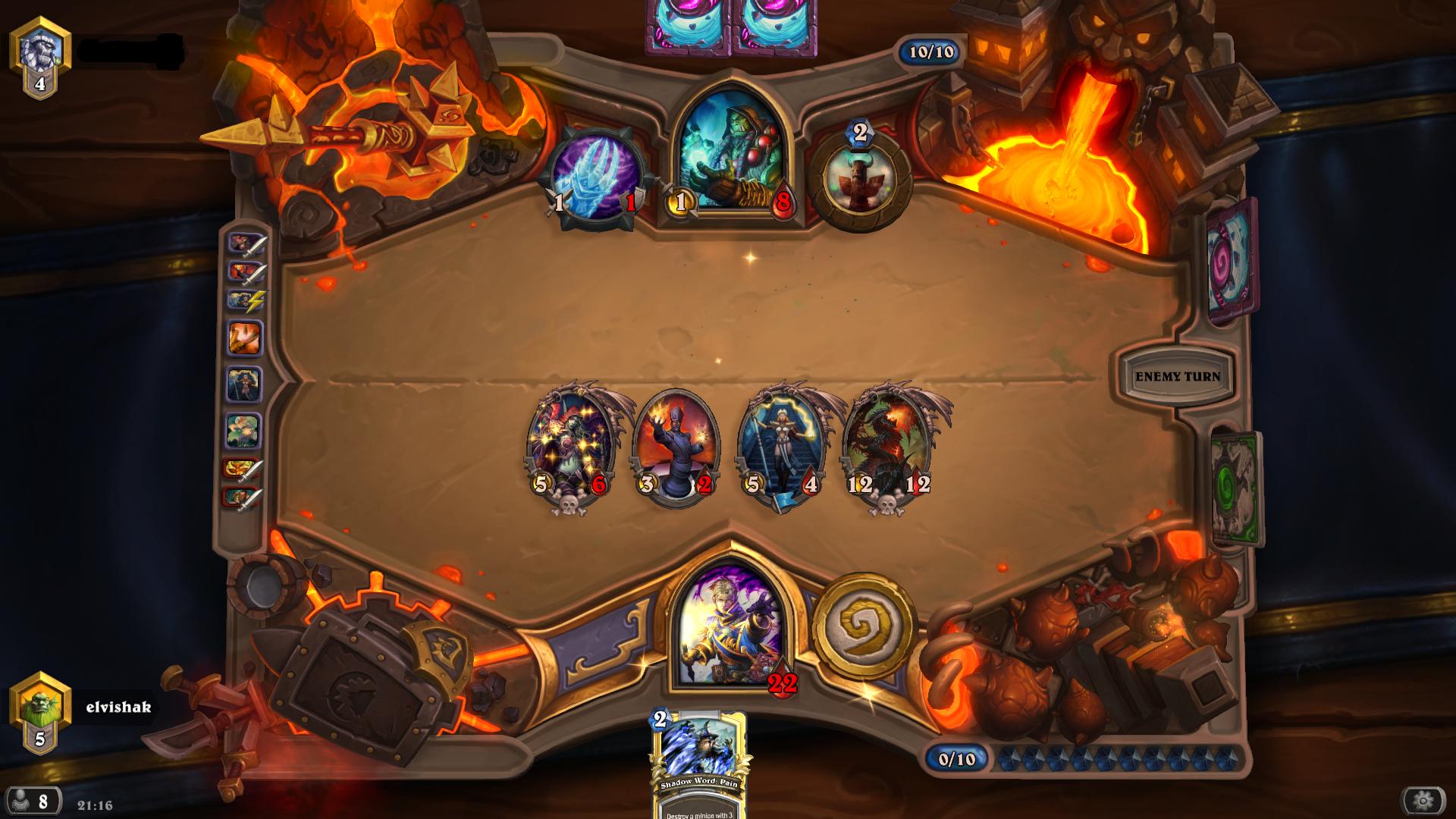 Secret Hunter? No problem, lets have a healfest! 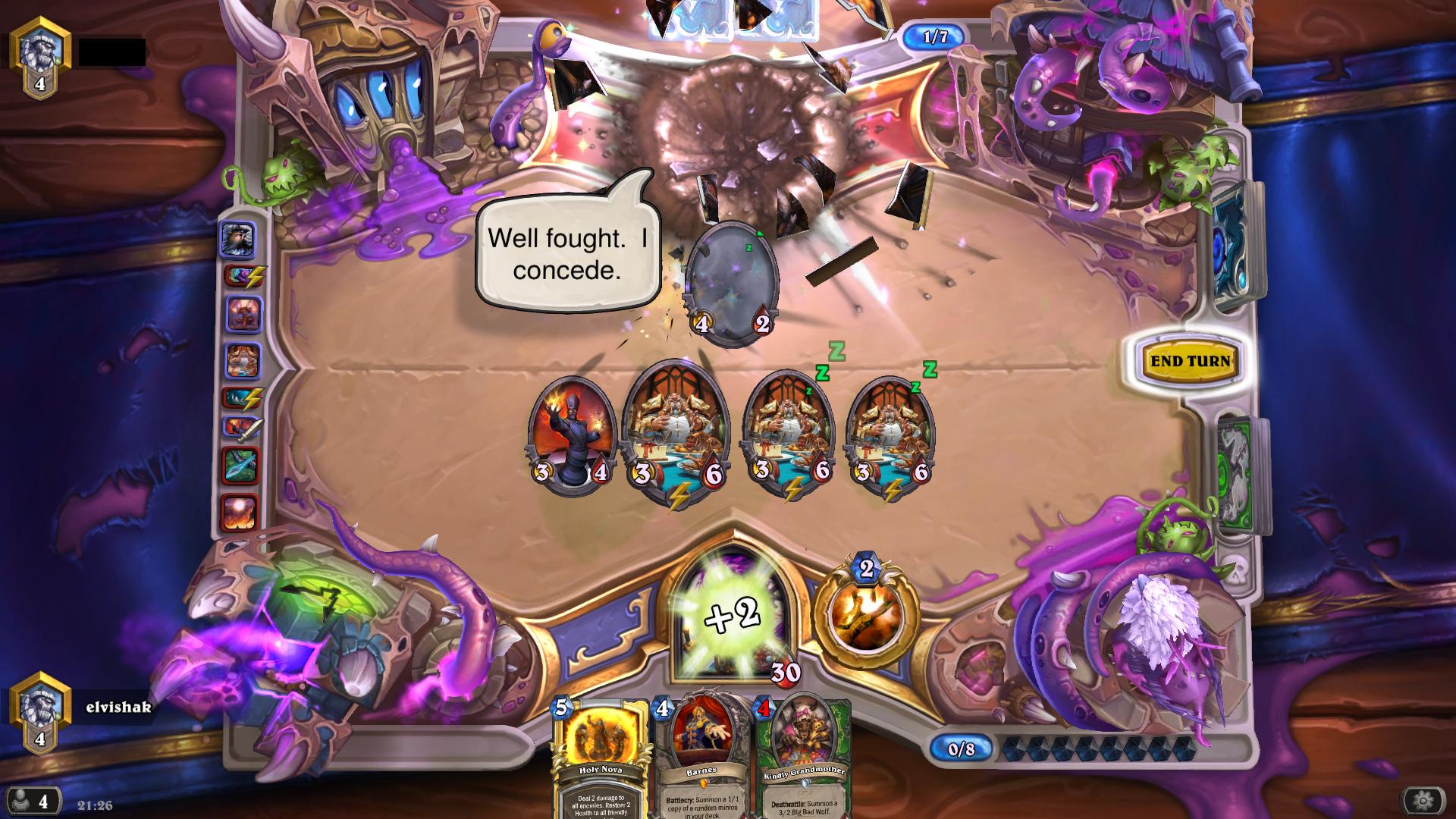 Here's one with some funny plays by the dude Khristophesaurus; Two cool games by Furo;A cool Ragnaros moment by Cluly;Another good example from Salterino;

Edit 04.10.2016: Ok replaced Cabal Shadow Priest with Barnes. Cos while there are good enough spells to deal with minions with 2 hp, barnes is more useful in this deck. Only Onyx Bishop is a bad target for barnes. It's good when he summon a 1/1 raggy, sylvanas or giant. then you can get one with full hp for only 2 mana with resurrection if you are a bit lucky.

Edit 07.10.2016: Got back a Shadow Word: Horror instead of a Holy Nova. Check reason in the Card Choices section.

Edit 09.10.2016: Removed a Holy Smite and Holy Fire, added another Thoughtsteal and got Shadow Madness back. Found 1 smite is enough and in end game it turns into a dead card. Holy fire seemed a little slow now. Thoughtsteal is just good to keep having enough cards and do some different plays when needed. And shadow madness sometimes turns into another aoe spell.

EDIT 10.10.2016: (important) Changed the deck title since we have 6 summoning cards. (It was [S31] Resurrect/Giant Priest before) Seemed more logical and funnier to me. Also replaced one of Arcane Giants with Soggoth the Slitherer since the meta is still fast. Tested him and he is amazing.

EDIT 23.10.2016: Removed power word: glory, added Ysera. Cos after i got to Rank3 i started to face more Control decks (warrior, paladin) and she is perfect against those kind of decks.

Check my other MSoG Decks;