Hello, Im Sodawashere (Soda was here) and just achieved legend for the first time with this deck. I've been playing Hearthstone for a few years but was kinda on and off since the end of the beta. Before, i would prefer just playing my  fav deck/class, (miracle rogue). But due to all the shamans, thats not the best idea right now... which is what led me to find a new competitive ranked deck.

It doesn't happen too often but sometimes you can have a "secret tree" just as big as ones from Mysterious Challenger . It is because of this and hitting your opponent in the face with big minions that this deck reminds me of the original secret paladin deck, and seems just as strong as it.


I've played this deck from rank 16 to legend. The highest rank ive achieved with this deck was legend Rank 7 (pic below).  I feel like its so powerful i can make it to rank 1 soon. I don't really have any recorded stats but i won most games with this. i think the win rate is about 70 percent? 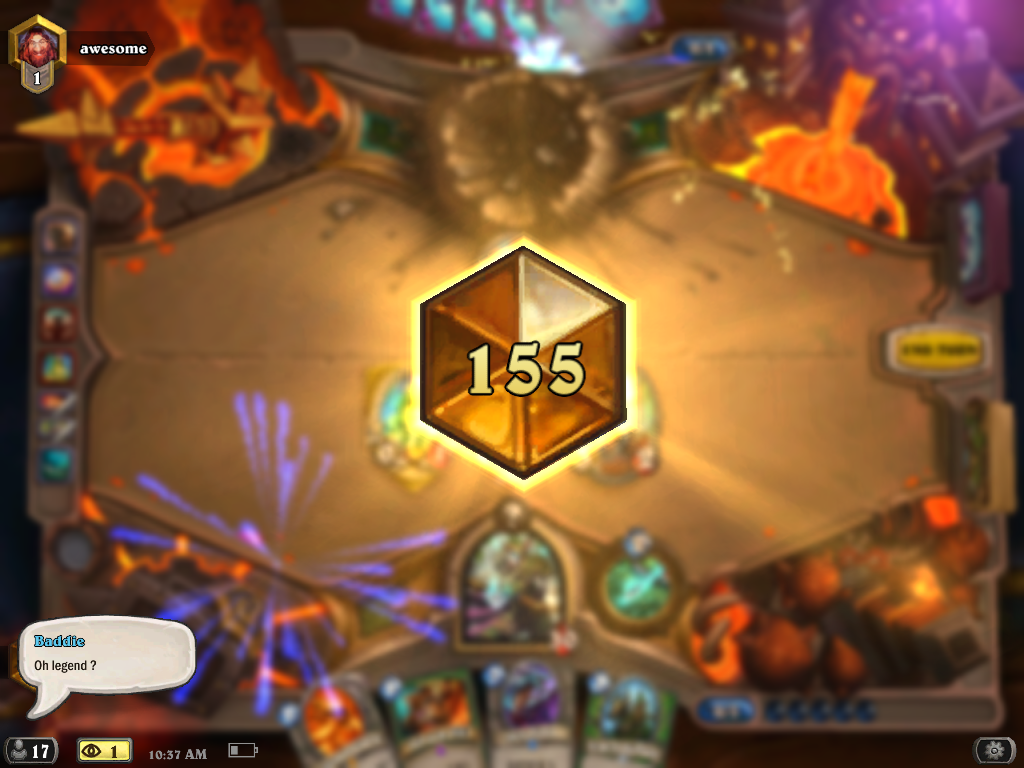 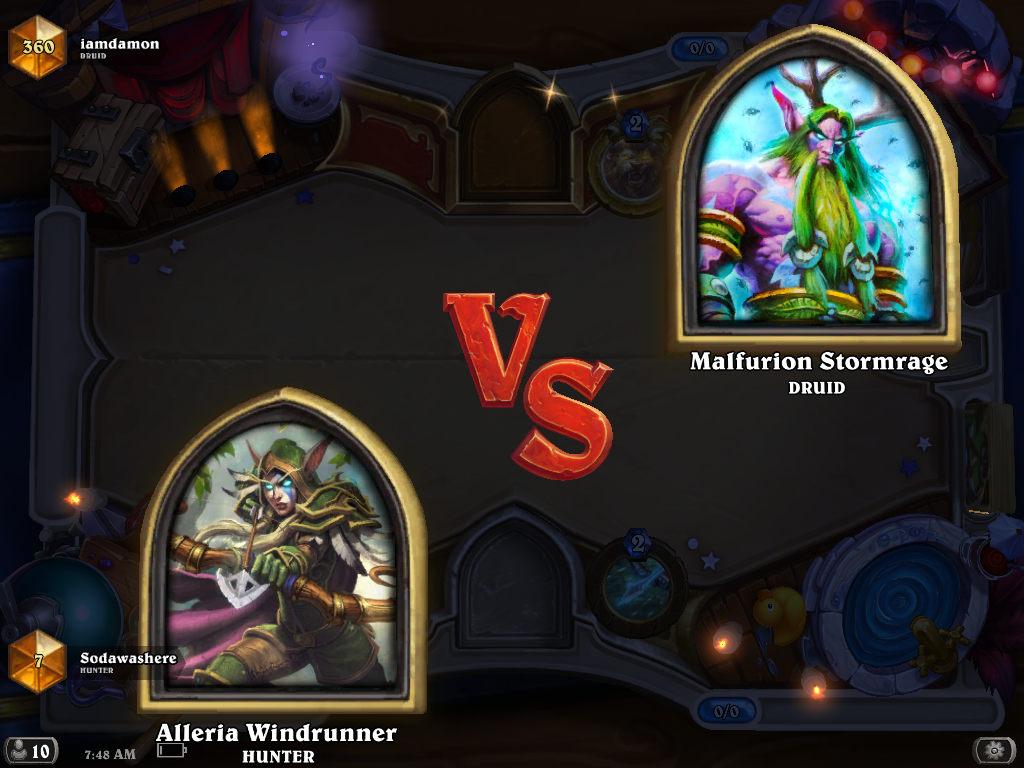 This deck plays just like any other mid range hunter deck. You tempo and clear their board until you have enough pressure/burst for lethal. Cards like  Call of the Wild or Ragnaros the Firelord can help you set up lethal and can be a huge tempo swing.

The main difference between this and other standard Midrange Hunter decks are the minions it uses,(ex - no Kindly Grandmother ,Infested Wolf , but includes  Azure Drake and Ragnaros the Firelord) and that this deck has many more secrets than usual.

These secrets can cause your opponent to misplay (putting them behind in tempo/low on life) ,put you in a winning situation (setting up two turn lethal ),or can even allow you to take back losing games. And If they dont play around your secrets correctly it makes the deck even more stronger than what it is. This deck is also fun because you can play mind games with people. ive had plenty of games where people think i play a Freezing Trap or Explosive Trap and choose not to attack. (when it was actually snake trap or something lol )

Tracking : Good for fixing bad mana curves. you can use it early for when you need a 2/3 mana card to play next turn. or late game if u have one extra mana and are looking for something for turn 8 (Call of the Wild)

Also is good with Cloaked Huntress . for when you need another secret to combo with her.

Secretkeeper : Good turn one play. Combos well with secrets in the following turn 2/3 , and through Cloaked Huntress  , you can have her grow by dumping your secrets out for zero mana cost. :'D

King's Elekk : Good turn two play and has a chance of drawing you a card. since we have very few low mana minions,  it'll end up drawing you cards most of the time.

Quick Shot : Good for killing minions early, combos well with spell damage from Azure Drake for  4 damage, draws a card when hand is empty, and can be used turn 7 on minions/face to set up lethal next turn with Rag or Call of the Wild.

Azure Drake : Gives decent stats for trading (4 health is hard for shaman and warrior to deal with sometimes)
Also helps baiting removal before Call of the Wild and Ragnaros the Firelord come out. Hunter lacks draw power so this helps cycle a little and has good synergy with explosive, quick shot, and snipe.

Savannah Highmane : A good Barnes Target and good turn 6 play most of the time.(unless you might lose without killing something that turn)

Ragnaros the Firelord : This card is one of the best Barnes target.( A 1/1 that does 8 damage? lol )
Since we're playing mid range Hunter, most of the time the board will be clear or almost clear by the time you play this card which means free 8 damage to face. But even if it isnt, Rag can help you clear the board by hitting their minion for 8 and maybe having them trade minions into him.  Just slowly clears the board or brings you closer to Lethal.

It is important to know that secrets Proc their effects in the order they are played. for example, if you have both  Explosive Trap and  Freezing Trap   in play, and and you played freezing before explosive, and a 1/1 attacks your hero, freezing will go off first, sending it to their hand and it will also proc explosive. which ends up wasting 2 secrets on a 1/1 that they can just replay.... which is horrible, because that 1/1 could have been a certain 4 mana 7/7(Flamewreathed Faceless ) going back to the hand.

General mulligans:   most match ups youll be looking for these : Eaglehorn Bow , Secretkeeper , King's Elekk , Quickshot,(look for quickshot in match ups where early board control really matters)  And certain traps that are good for your matchup. I only keep Cloaked huntress  if i have a really good curve with alot of traps, but most of the time you wont need to keep it. Sometimes  i'll keep secret keeper and huntress with traps. On turn 2 coin out huntress and watch secret keeper grow :'D

Mage:  Look forEaglehorn Bow, quickshot, secret keeper, and keeping snipe isnt bad, but more personal pref. I prefer picking snipe only vs shaman. But you basically win if you snipe their Flamewaker.

Shaman:  imo, a hard match up, search hard for Eaglehorn Bow, quickshot (basically just the general mulligans plus snipe). its pretty important to keep their board clear.Cloaked Huntress and Barnes trade well with most of their minions and spells since they are at four health. Snipe and Freeezing Trap can be very strong here but without board control can be played around.
their spell damage minions are important to kill becasue more shamans are playing Spirit Claws ,also expect them to have Hex for your Savannah Highmane . Or if you see them use hex, drop down highmane with no fear.

Warrior: Against Dragon Warrior Eaglehorn Bow is one again great. Try to bait out some removal on your smaller minions mid game he wont be able to deal with Savannah Highmane and Call of the Wild. if he uses Execute early, should be easy after that if you have either of those two cards. also dont mulligan for snipe, but if you have it, try to play it to where you know itll kill something,  like Frothing Berserker. i try to predict when he'll play it.

Priest : Play minions, clear the board, and your late game will win before he can recover.  Freezing Trap on Injured Blademaster can seal the game early since he needs it to die to resurrect .

Hunter : Look for King's Elekk, Secret Keeper, and bow. Most of the lists I've played against are running many more 1+2 drops and rarely win the jousts. Turn 3 Huntress + 2 or 3 traps is GG against most hunters from what I've seen.

Druid : The deck does not have a great way of getting rid of Innervated threats besides freezing and possibly snipe. Beast druid seemed much easier you both trade on board till we drop bigger threats then they do. Just try to get a good curve. SK, Bow, King's elk, tracking etc.

Warlock : vs zoolock,  Mulligan for removal and hope they do not have a great curve.

Rogue : didnt see too many rogue... prob cuz of all the shamans and warriors lol. But Rogue has Good spell removal for our minions and good minions of their own with the potential for massive burst. Snipe can be great in this matchup and try to get some value out of your bow before you burn all the charges.
look for general mulligans "eaglehorn bow, quickshot, secret keeper, etc"

Most cards can be replaced with a second  [cardquickshot[/card]   ,and if you want to replace a trap, you can use any other trap. its kinda based on preference... but some cards are obviously better than others. (Cat Trick [/card]vs [card]Dart trap )

you can also switch a king's ellk  for a curator . both kinda do the same but your early game might be a bit weaker

* im trying Kindly Grandmother  and  The Curator
right now   and just seeing how that works since the Call of the wild nerf.... had to drop one. costs too much mana and can be a turn too late at times :'/
RIP