Important update: Due to the hyper aggressiveness that the 3rd wing of Karazhan brought to the meta, I replaced the Twilight Summoner with Bloodhoof Brave and Deathwing with Alexstrasza. You can also watch the changes I make to the decks and testing of the new ones on my stream twitch.tv/urkoth

This is the deck I used to reach legend on day 6 of the new season and it is a control/fatigue deck. Had a lot of fun with it. , you can ask any question and I will answer in the comments. I'm gonna mention that Tinkmaster Overspark was insane in some situations and that I played Arch-Thief Rafaam instead of Deathwing until rank 3. 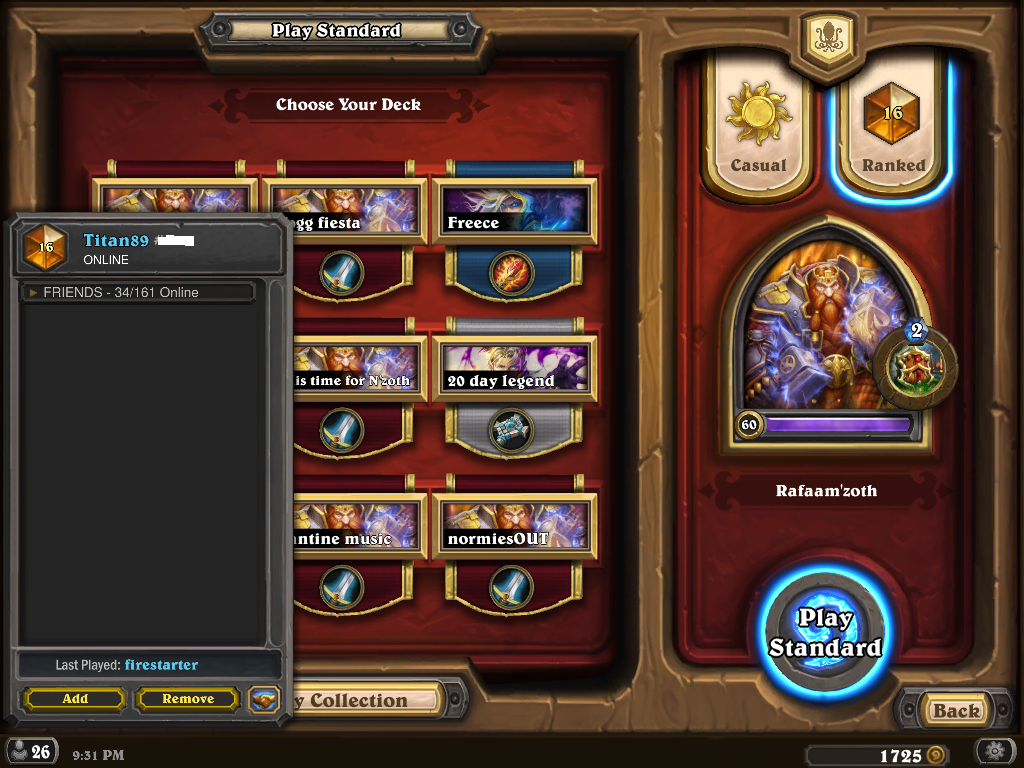 Mulligan: Some people say that you should mulligan hard for Fiery War Axe but I'm not one of those people. Try to get it but don't throw away things that could help you in some matchups. If I don't have the axe in the opening choices, I will keep Slam and Revenge against warlocks, as well as Bash. We usually want some early game against most of the meta right now. Some of my own choices include keeping the Brawl against warlocks, Execute sometimes against druids and Harrison Jones against shamans, since Donghammer is their ultimate annoying win condition against us. I welcome you to trust your gut during your mulligan.

GOOD: Dragon warrior, ALL KINDZ of shamans, Yogg Druid, Zoo, Freeze Mage. Notes: Farming dragon warriors, zoo, yogg druids and shamans is pretty good since they're most of the things you see on the ladder. Most of these decks are tier 1 so there's a slight chance that you can lose if they draw perfectly and you don't but you should be fine otherwise.

EVEN: C'thun warrior, Miracle Rogue, Tempo Mage, C'thun Druid. Notes: I didn't meet many of these decks on the ladder and I would actually put them all in the good matchups category except for C'thun Druid, since I usually won games against these decks. It's important to mention the strategy against C'thun warrior - try not to draw cards, bait out his C'Thun by playingSylvanas Windrunner before C'Thun is played and then transform him with Tinkmaster Overspark. If that C'thun warrior is playing Elise Starseeker instead of Doomcaller, try to play N'Zoth after his Golden Monkey but if you play it before it, it's still fine since he will take some damage and lose the fatigue war usually.

BAD: Midrange Hunter, Renolock Notes: I don't even have a negative score against these decks. I know control warrior can struggle against hunters but this wasn't the case while I was piloting this deck. Transforming his Savannah Highmane with Tinkmaster is a huge thing, especially if it becomes a squirrel. Renolock is a bad matchup because of Lord Jaraxxus, that hero power is just bonkers. Try to burst him with Gromm and a weapon, a buff spell from Ach-thief Rafaam is nice if you're running him instead of Deathwing