This is TF2 and gaming personality Ruskeydoo's legendary hunter deck, some of the following was taken from their Reddit post. The rest was written with Ruskeydoo for this guide. 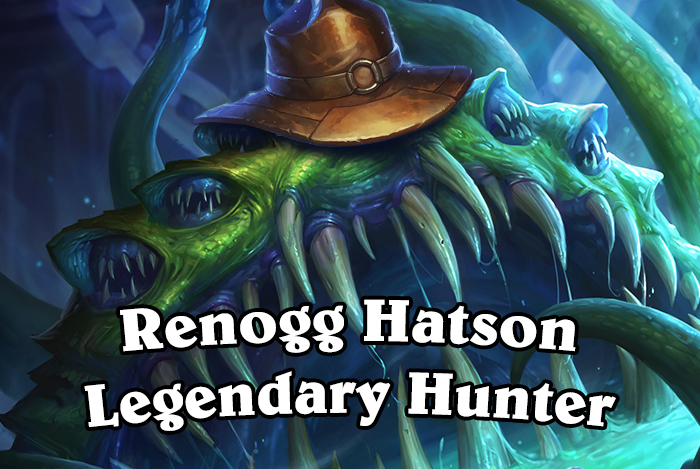 Been playing since beta, said to myself “If I ever get Legend, I will do so using a hipster deck of my own design.” Finally managed it. Pretty much the entire climb was done using this monstrosity.

Bear Trap – Great early minion, put a hat on it.

King's Elekk – Draw is nice, Info about your opponents deck is good, can mislead opponent about your deck.

Quick Shot – Removal. I have never drawn a card with it.

Dreadscale – token clear, extra one damage on other things can be great, beast, mini-Geddon.

Powershot – Great clear. We have a lot of ways of making it hit for 3 damage. Make zoo cry.

Sylvanas Windrunner – Value minion. There are various sketchy ways you can play then kill for a steal.

Call of the Wild – Crazy card. Always gets value.

Yogg-Saron, Hope's End – When you lose control of the game drop Yogg. HAT.

Renogg Hatson is rather complicated deck to pilot, it’s not easy at all. Your decisions will be dependent on what your opponent’s deck is. An example would be when playing a Warrior, I wouldn’t drop Sir Finley Mrrgglton on turn one, because I need to know which type of Warrior I’m up against.

It is important to have a good general knowledge of the types of decks out there, their win conditions and their weaknesses. Also your opponent’s reach, what I mean by this is how much burst damage they muster to kill you in one. There’s a single heal in this deck, so you must know the best time to play it.

If your opponent is playing a rush deck, such as Aggro Shaman, zoo, pirate warrior, then you’re looking to fend them off with AoE, establish any board presence you can with your low cost minions. Try to make it to late game with Reno Jackson, at this point you’re probably fine.

Against some control decks, such as Evolve Shaman or Control Warrior you’re looking to out value your opponent. Be willing to take a little bit of damage to get the most out of your cards. Make sure to pressure your opponent so they have to play their cards inefficiently.

Mid-range decks are again a case of value, survive the early game and simply control.


C'Thun Warrior is incredibly hard to play against, you essentially need to rush them as fast as you can. Try to force them to play their Doomcaller before their C'Thun , or a small C'Thun .

Dragon and Pirate Warrior isn’t a hard match-up, control the board and stay alive. If you manage that they’ll run out of steam.

Both Miracle Rogue and Deathrattle Rogues will be hard matches. For Miracle you really need to try and control from the beginning, and put them in a situation where they need to use their cards to survive instead of having a huge Gadgetzan Auctioneer turn.

For everything else, just play control.

Philosophy: When choosing your mulligan, don't think so much about advancing your own aims, think about countering what they're trying to do. We are not planning on winning any time soon, so choose what will make their life difficult.

Don't be too greedy with your mulligans, don’t keeps cards just for draw.

There’s plenty of mulligans you want to keep against specific decks, too many to list. Use your best judgement, obvious things such as keeping 3 damage clears against Shaman and 2 damage against Zoo.


Hunter: If you’re putting on good pressure, and they’re near to death keeping your hero power is fine, for now.

Mage: Generally the best, it has synergy with hunter’s mark, Acolyte of Pain, with all the AoE the ability to add an extra one damage is huge. Great board control.

Priest: Second only to Mage, you can extend the life of hatted creatures and it gives you more flexibility as to when you play Reno.

Warrior: Actually a very solid pick, it doesn’t control board but it gives you survivability which is nice. Great against rush.

Warlock: When you know it’s a deck you need to rush down, this is the best hero power. But it’s a little bit of a desperation move.

Druid: Not the best, but plausible. Provides board control, but you don’t want to be taking that damage. Useful for extending the reach of your weapons.

Paladin: Everyone’s packing so much board clear that I can’t see myself using it.

Rogue: I’ve taken in desperation, but it’s not great. You don’t want to be taking that face damage.