Update: Highest rank I achieved so far on Asia server with this deck (6/24/16) 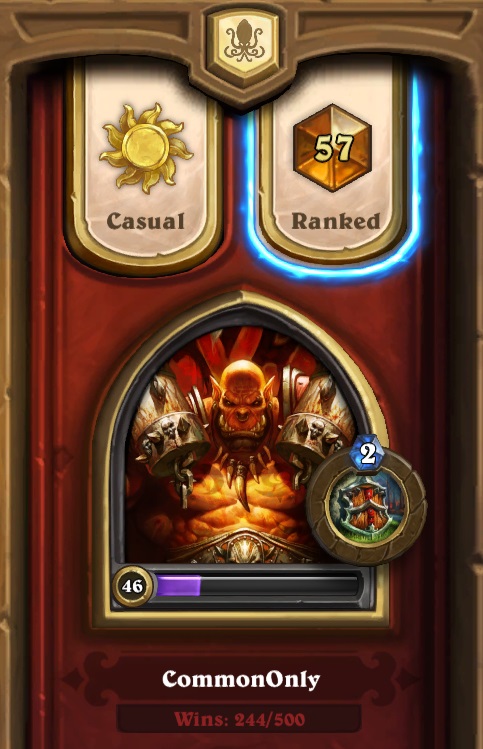 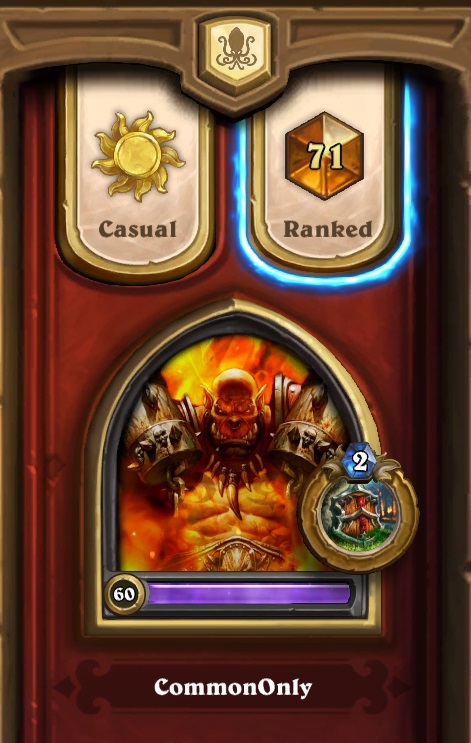 Hi everyone! This season I decided to try a F2P (free-to-play) challenge on Asia server since I don't have a very large card collection there. The rules were to use only basic/common cards (no rares/epics/legendaries allowed) and no adventure cards since these are typically very expensive for new players to unlock (700 gold per wing). The total cost is only 800 if you have to craft every single card but most likely new players will have opened a significant number of the cards through packs. Note that some of the deck costs on Hearthpwn are very misleading because they do not factor in adventure cards!! This is truly a F2P deck that can hit legend. 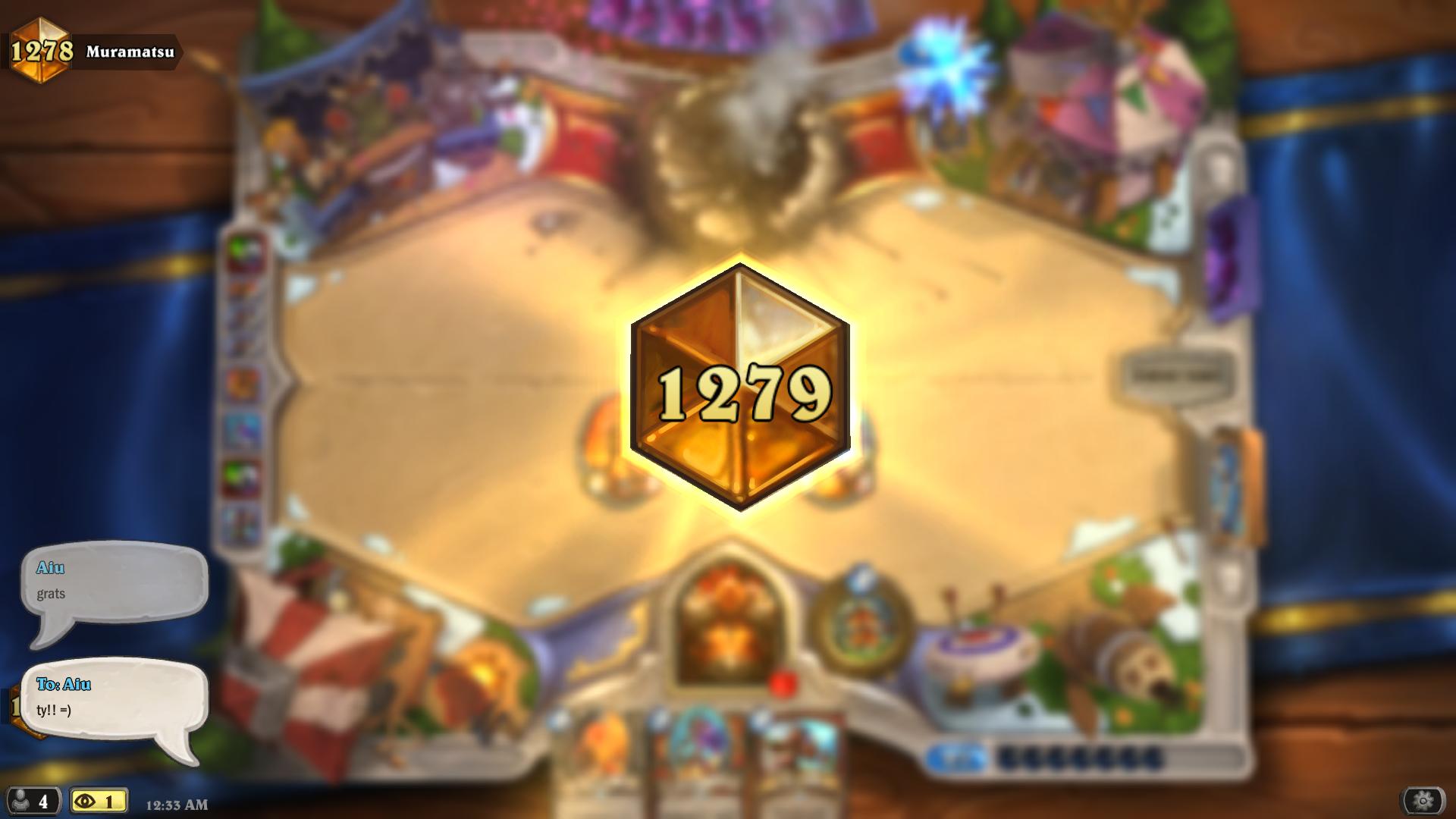 The strategy behind the deck as the name suggests is to OTK or one-turn-kill your opponent with Raging Worgen + Charge and activators like Cruel Taskmaster and/or Inner Rage. You generally do 16-20 damage on turn 6-8 to finish off the game. It has 2 copies of all combo pieces to help with consistency and plenty of card draw mechanics. It also has some anti-aggro cards like Mad Bomber and Ravaging Ghoul to clear the board and Bloodhoof Brave for taunt. Check out some of my instructional videos on this deck and other decks on my Twitch/Youtube channels!

Some example game play on the road to legend:

The mulligan is generally the same against all classes. You want Fiery War Axe all the time and your early drops like Mad Bomber, Loot Hoarder, Acolyte of Pain. Never keep combo pieces like Inner Rage, Raging Worgen, and Charge. Against slower control decks you can keep Gnomish Inventor for cycle if you already have the early game cards. Against aggro decks you'll want to keep Ravaging Ghoul for the board clear. Try to maintain board control early on with your weapon and early drops to allow you to fit in the face damage to put your opponent into combo range. Only start to go face if you have no way to come back on board or have the cards in hand to enable you to race for lethal. Kor'kron Elite is useful for punching in the needed damage or trading off minions like Frothing Berserker and Imp Gang Boss before they get out of hand. Bloodhoof Brave also allows you to stall out an extra turn to set up lethal. The key to playing this deck is always to know how much damage you have in your hand and when to start setting up lethal for next turn. Try to save Execute for getting through the taunts or removing big threats. Finally, one of your biggest swing cards is Battle Rage so always try to get good value from it to draw your combo. Happy OTKing my F2P friends! =)

Thank you all for the upvotes and feedback! Really happy to see a lot of new (and old) players benefiting from the cheap deck. Of course, I also see that many people are struggling, which is to be expected. I just want to make perfectly clear that a cheap deck does not mean easy-to-play or even "beginner-friendly." Why do I advertise it as F2P then? Well, it is F2P in the sense that you can pretty much craft the deck within a few hours of a fresh account. That means anybody can have access to it. The success of the player is then not limited to their card collection but by their skill, which is how I think the game should be. It also exposes new players to the depth of the game which may not be as obvious when you play face decks or curve decks like tempo warrior, c'thun druid, midrange hunter, etc. Although these other decks are much easier to play and are less punishing for misplays than combo decks, the sense of reward for playing a more complex deck is just on another level. This is naturally the case with any deck like miracle rogue or freeze mage that runs a lot of card cycle. Having more options and cards means more complex scenarios/decision-making than decks that naturally fall into play-the-topdecked-card-because-I-have-no-card-draw-and-rely-on-luck-to-get-my-curve-all-the-time-and-win-games-and-I-will-now-BM-emote-all-the-time-to-prove-that-I'm-not-a-bot-because-honestly-a-bot-could-play-the-deck-that-I'm-playing.

Okay, hopefully that was enough convincing to encourage newer players to try to learn the deeper aspects of Hearthstone gameplay even if it means some lower win-rates during the learning process. It's important after each of your losses to evaluate what went wrong in that game and if there were any points were you had multiple viable lines of play and made a wrong decision. Don't beat yourself up for losses to lucky players if you played correctly each turn. Learn to change the deck yourself as well! Deck-building is an important skill, and you understand a deck better when you are the one to build/modify it because then you know why each of the cards are in the deck. One of the common questions in this thread is about card substitutions for "upgrading" the deck if you have more cards. Here are some cards that you can think about including:

and the flex card spots are probably

It's up to you how you want to alter the deck to suit your play-style. You can make it very greedy to beat control or very anti-aggro. A middle-of-the-road upgrade that I like is

Hope this helps! Good luck and please remember to have fun. It's a game after all!

Blood To Ichor is a good anti-aggro card and good way to trigger Acolyte of Pain without giving up combo pieces. I decided against Frothing Berserker as being too slow to set up and not high enough impact without cards like Whirlwind. The focus is card-cycle and pressure to get turn 8 lethal consistently with the 2x combo pieces.