Hey there everyone and welcome!

Don't forget to +1 if you enjoyed the guide/decklist. A lot of time and effort went into these and it's a free and easy way to say thank you.

A Little About Me

I am a 17x Legend Player with 2x Top 100 finishes who goes by the battletag WingsOfWax or WingsOfWaxIII on other social media (Facebook, Twitter, Tumblr, Twitch, and YouTube). I have over 15+ Years of Magic: The Gathering Experience, but as of the release of Hearthstone: Beta been converted to this new and exciting card game.

Over the past year, I have been creating videos, articles, and casting live streams to help educate newer players about Hearthstone: Heroes of Warcraft. As of right now, I am mostly known in the Hearthpwn.com community for creating a Naxxramas + 2,000 Dust Budget Guide 11 Deck series as well as putting Burst Rogue back into fruition.

These days I am working full time, go to school, and still create Hearthstone content whenever I find my schedule allows it. I love educating all types of players whether new or veterans about becoming a better strategy card gamer. I am creating this guide (and others) to help educate and grow the Hearthstone Community even further.

Warning: This is an aggro deck. It has inconsistencies similar to any other Aggressive strategy and is not exactly straight forward to play. There is a lot (not all) of SMOrc'ing (Face is the Place) to be done, but you will have to plan out your turns according to how your hand is sculpted for optimal plays that leave you in the driver seat. Playing out this deck takes time and practice to fully master and play well, but it can be done and eventually could take you to the Legend status you desire.

Some perks of playing this deck are:

-An aggressive strategy, which all newer players should partake in.

-Quick Games, win or lose in a fast manner.

-Helps the player learn to properly manage their resources, especially versus Sweepers (board clears).

-Has a solid late game plan by using the Warlock's Hero Power to refill your hand.

2x Forbidden Ritual - Is extremely helpful to refill the board after a board clear. Synergizes with Knife Juggler, Darkshire Councilman, Dire Wolf Alpha, and Cult Master for extra value. Try to use the Ritual to get at least 3 or more minions for best results.

1x Mortal Coil - Helps your early minions trade up for larger minions. Often I've comboed Crazed Alchemist with Mortal Coil to kill a Tunnel Trogg or Armorsmith. Is not a necessary card, but at the cost of 1 mana it can help quite a bit and draw you into more threats.

2x Power Overwhelming - Used to clear a medium to large opposing minion or to give you extra damage to close out the game. Best used on a Possessed Villager or a 1/1 to negate potential loss of value.

2x Abusive Sergeant - Not an ideal turn 1 play, but it synergizes with your other 1 mana minions for value. Try to save Abusive Sergeants for value in trading up with a larger minion. If you are up against a class that does not have a Hero Power that answers Abusive, you can play it turn 1 (only if you have no other 1-drops).

1x Elven Archer - Is basically the same as Mortal Coil, but creates a 1/1 body instead of drawing a card. Helps trigger Darkshire Councilman's ability. Can be swapped out for another Mortal Coil or just about anything else if you do not want to play Elven Archer.

2x Flame Imp - An undercosted minion that gets in for early damage or makes valuable tempo/value trades. The 3 health lost is almost irrelevant early in the game, but be careful because taking 3 damage late in a game versus aggro decks can be exactly what they need to lethal you. Use your best judgement late in the game.

1x Acidic Swamp Ooze - Majority of the current meta involves weapons, so adding in an Ooze seemed like a solid choice. I'm unsure if 2 copies is the right choice, but for now the single copy has come in handy. This is meta dependant and can be swapped out for other cards you see benefiting this deck.

1x Crazed Alchemist - A meta call that clears Doomsayers and Totems. Also has the option to inside-out a Darkshire Councilman for lethal on occasion. Keep in mind you can also Crazed to inside-out a Voidwalker to trade up.

2x Dark Peddler - A solid value minion that gives you choices no matter what point in the game. Need a 1-drop minion to help fill the board? Late in the game and need to find more burn spells?

2x Knife Juggler - Zoo is the only deck right now that can abuse and protect Knife Juggler. Typically if you have another 2-mana minion in your hand you want to cast it before Juggler. Knife Juggler gets better later in the game when you can use Forbidden Ritual or attack with an Imp Gang Boss.

2x Darkshire Councilman - In most matchups, you want to cast Darkshire later in the game and not on turn 3. Since being a 1/5 makes him vulnerable, you need to setup a turn to get him above 1 attack before safely playing him. Typically you want to clear the board of opposing minions before getting a Councilman on board. If you time Darkshire right, he can be a major win condition mid to late game.

2x Imp Gang Boss - In most matchups, Imp Gang Boss is your ideal turn 3 play (or coin turn 2). Imp is a sticky minion that has synergies with a lot of your deck. In most games, I play Imp Gang Boss on turn 3 then Darkshire Councilman and a 1-drop on turn 4 to potentially get value from Imp Gang Boss and buff Darkshire in the process.

2x Defender of Argus - Since we have a lot of sticky minions in this list, you can reliably get 2 minions available for Defender to get full value. If you have a Doomguard in hand, try to get Defender on the table as soon as possible so you do not run into the issue of drawing the second Doomguard. Try to use Defender to save weaker minions from potential board clears.

2x Doomguard - The Battlecry from Doomguard is almost nullified in this deck because your ideal game empties your hand before you kill your opponent. Can be used to kill your opponent in one swing or a few since a 5/7 is relatively difficult to deal with. Against Control and Midrange decks, you are aiming for face damage but versus Aggro decks you may want to consider trading with minions.

Soulfire - When it comes to adding cards that force you to discard, you can reliably only have so many before they start having a huge negative impact on your games. In just about any game I'd rather have Doomguard for the potential of dealing more than just 5 damage where as Soulfire is a one time use. In a more value oriented version of Zoolock, Soulfire does not make the cut.

Demonwrath or Hellfire or Shadowflame - Since this deck is trying to be aggressive, there is no real reason to deviate from the plan with a board clear. When I build my decks, I try to make them as consistent as possible, which neither of these board clears fit the theme of the deck.

Argent Squire - Is a solid turn 1 play, but there just is not enough room for a pair of Squires. Tormented Villager has taken the slot of Squire because the Deathrattle synergizes with the deck more than the Divine Shield. I have also run into some poor situations where I'll have to Power Overwhelming my turn 1 play and doing so gets you almost no extra value from Squire. 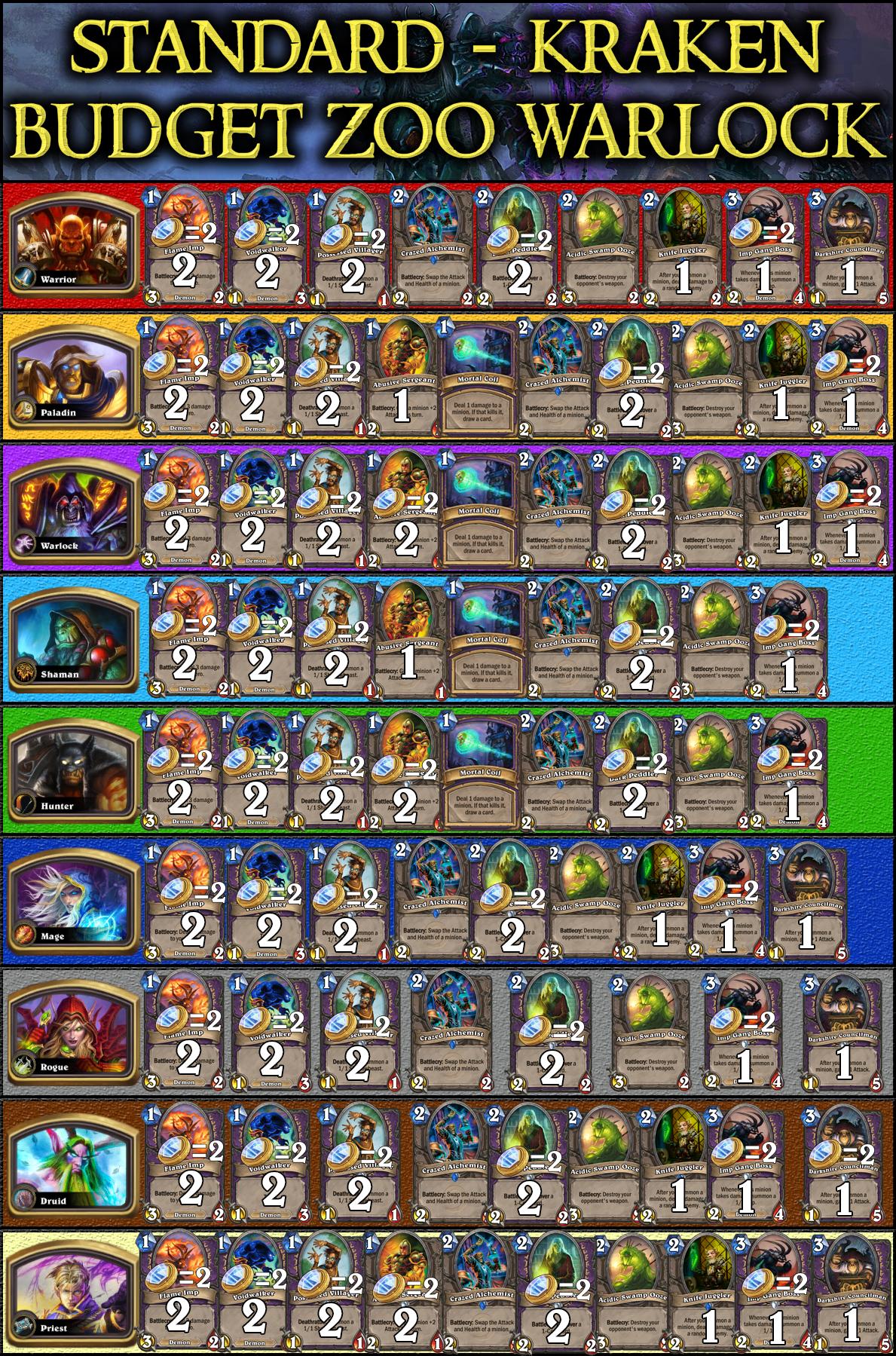 How to play the deck and Tips:

Typically you want your opening hand to have a curve of a 1-drop and a 2-drop (or 2x 1-drops). This allows you to keep up the tempo early in the game and attempt to develop a board presence.

You are looking to make profitable trades against Aggro decks while being mostly a Face deck against Control. Always make trades when they benefit you (unless you can kill your opponent or setup to kill).

Crazed Alchemist is an offensive and defensive card, so play him wisely to get value.

Try to save Knife Juggler when possible for later in the game to combo with Forbidden Ritual.

Keep a Shamans board cleared at all times. It's their one weakness. Be sure to play around Lightning Storm when possible.

Find more decks by clicking the link below!

If you are looking for a deck that maximizes your time and is competitive, this is the right deck for you. The deck is also Budget Friendly and can be altered slightly depending on what your collection looks like.

I will do my best to answer each question in the comments about swapping cards, but ultimately use your best judgement when deciding what you can substitute and what you cannot.

If your looking for a deck to get you out of the lower Ranks, this one will surely do the trick when piloted reasonably well.

Interested in learning more? Feel free to stop by my Twitch Stream and subscribe to my YouTube, in which I'll either be playing Ranked mode with a variety of decks.

Don't forget to +1 if you enjoyed the read/video/decklist.

Thank you for checking out this deck and I hope it serves you well.

Good luck and grind on,