GET BACK TO WILD, GET RANK FIVE!

hey Guys, my name is Breno and I am NOT a Pro Player, but I would like to show you how to get to rank 5 in a few hours!

I got stuck on standard and couldn't pass rank 10. I was really upset because I only had 5 days left and I wouldn't make it to rank 5... So I decided to check what was going on the Wild Side!
Do you guys remember Dr. Boom? Damn I miss this card! And then I thought: Dr Boom > 2 Boom bots  = Mech = MECH DECK!

I could't belive myself when I won 15 games in a row. EASILY.
So I decided to share this deck with other casual players like me who wants to grind that golden epic.

The deck is composed by the standard mech cards, in addition to the new card Faceless Summoner and some other great Mage cards that help the deck often snowball out of control, usually destroying the game by turn 6.

Mana Wyrm - Great one-drop minion and just fantastic at taking out all the creatures with 1hp. Even with the lack of many spells they'll often trade two for one and can win you games on their own if they go big and can't be dealt with.

Clockwork Gnome - Standard 1-drop Mech that can deal with those 3/2 and provides a Spare Part.

[card]Snowchugger[/card] - I love this card. A decent body for a 2-drop and can make those weapon based decks useless. It doesn't matter if they have big weapons if they just can't attack.

Unstable Portal - Turn 1 mana wyrm , turn 2 portal - nuff said. Besides that they can sometimes win you games with a perfect pull.

Arcane Intellect - The reason I run one of this card is because by the turn 6 I dropped a lot of minions for a finishing blow. If somehow the opponent manage to handle that, I need a response to regain board control, usually with a  Dr. Boom or a Fireball.

Goblin Blastmage - Great 4-drop card. 5/4 and great battlecry. Puts a lot of pressure in the game and cleans out many minions.

Faceless Summoner - This new WoTG is just fantastic! A 5/5 that summon a 3-cost minion??? You may get a Scarlet Crusader, a full-health Injured Blademaster or even a Iron Sensei!

Annoy-o-Tron - Everyone hates this card. It helps keeping your[card] Mechwarper[/card] alive while you flood the board with your mechs.

Spider Tank - Great body for a 3/4 mech. The reason I only run one of these is because I like having a Arcane Intellect for late draws.

Tinkertown Technician - 4/4 for a 3-drop minion AND a spare part. Sereously, those spare parts can change the game. Swapping  atack and health is amazing.

Gorillabot A-3 - This card is really helpful at adjusting the deck to work well in different matchups. Discovering a Enhance-o Mechano can win the game our of nowhere! Discovering a[card]Sneed's Old Shredder[/card] or a Piloted Sky Golem against a control deck could really swing things into our favour.

Piloted Shredder - One of the best 4-drop cards in the game.

Generally you should go for those earlier minions (Cogmaster, Clockwork Gnome,Mechwarper, Mana Wyrm).
Go for a good curve. We have a lot of low cost effective minions, It's hard not having a good opening hand. Keep portal only if you have mana wyrm in hand otherwise go for mechs.

Sometimes you'll find yourself with two Mechwarpers on your starting hand. If you got the coin, you may want to use both of them on turn two and flood the board. Its risk, but people usually don't have a response to that.

Annoy-o-Tron, Snowchugger and Goblin Blastmage are key cards.
Anny-o-tron and Blastmage will handle those 1-hp minions, and a well timed chugger can be a killer for those weapons!

Here follows a print of my tracker: 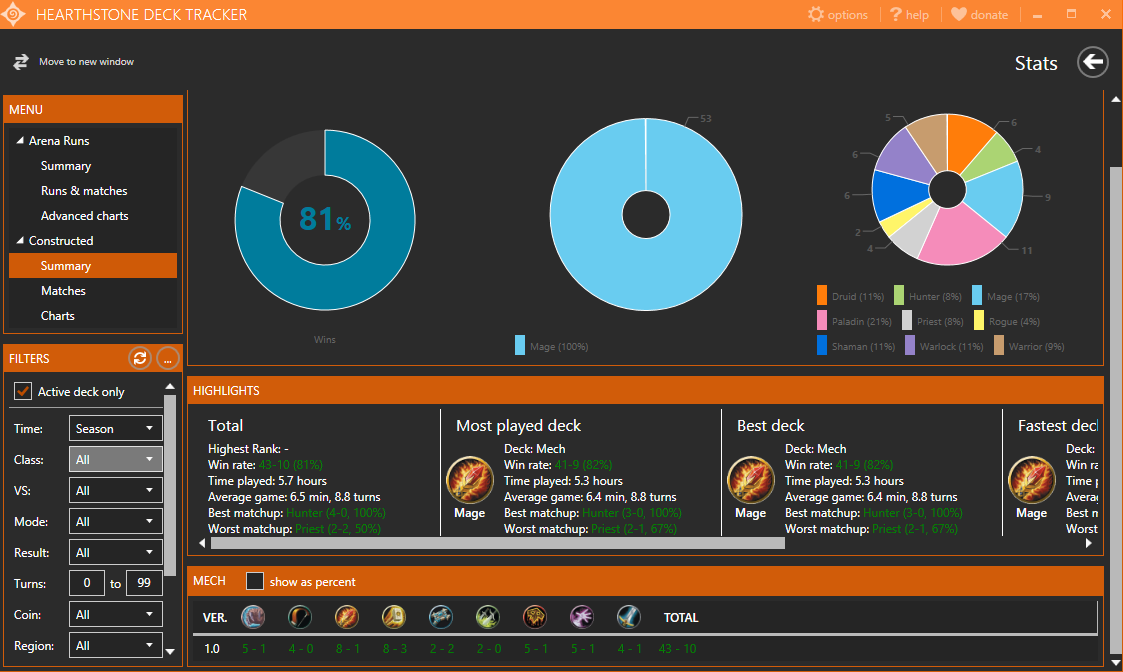