Registered May season legend finishes with this deck:

Got second place in Hearthstone Festival major with this deck: Zoo warlock has to be one of my favourite archetypes in the game. Ever since the early beta stages of Hearthstone I love the idea of having the initiative and demanding answers from my opponents. Zoo let's you do exactly that: YOU dictate the pace of the game. Your opponent? well, he better makes sure he has the right board clears at the right time otherwise he's a dead man. As usual, zoo has found it's way into the current meta, and not just a spot, no, THE spot as apex predator at the top of the ladder food-chain!

After switching to zoo, I went from rank 5 all the way to legend within a couple of hours. Even in legend I am continuing my streak: As with every deck, your strategy varies from opponent to opponent. I will go further into the match-specific strategy in section 3: mulligan and gameplan. I can however give some general strategic tips which are more or less the same for every opponent you're facing.

Idea behind the deck - What you're trying to do is put out some strong, sticky early game minions such as Possessed Villager and Voidwalker and use buffs like Dire Wolf Alpha and Abusive Sergeant to trade efficiently. What this accomplishes is that you gain strong mana and tempo advantage. Once you are ahead in tempo you can drop threats like Darkshire Councilman, which your opponent is likely not able to remove because he is already kind of "behind on mana". The way you win is by building up the board, trading efficiently (trading is almost always better than pushing face!) and finishing off your opponent with the Leeroy Jenkins + 2x Power Overwhelming + 2x Abusive Sergeant + Soulfire burst combo for a maximum of 22 damage. Most of the time you won't be able to collect the full combo and you shouldn't be greedy on the pieces either, but any combination of burst cards will do the trick.

Versus minion based decks, getting early board control if most of the time enough to put the game on lock. Against spell-heavy decks like freeze mage and rogue however, you have to try to play around their AoE clears. Most control decks include Doomsayer nowadays, so Crazed Alchemist has become a popular meta tech to provide an instant kill on doomsayer now that Ironbeak Owl is irrelevant.

positioning - Being able to position your minions correctly is a very important aspect of being a good zoo player. In general, you want to place the weakest minions to the middle, so that you can move them up when trading with Dire Wolf Alpha. For that reason, you should place your Imp Gang Boss to the far left, since the imps spawn to the right of the gang boss. There are exceptions to this rule. When you want to set up a specific Defender of Argus target (e.g. taunting the two strongest bodies or setting up for a specific trade that you anticipate will happen) you might want to change your placement accordingly.

Below you can find some match-specific information like what to mulligan for. This guide is based on ladder game play where you don't know the exact archetype you're facing.

The matchup against warrior is very tricky. Be aware that warrior has received the biggest zoo counter card in WotOG, namely Ravaging Ghoul. Try to play around it by not filling the board with 1 health creatures, as you might aswell concede if the warrior gets off a value Ghoul. Versus Tempo warrior try to put pressure by making effective trades and swarming the board. Do the same versus control, but watch out for Brawl! You can play around brawl by tapping a bit more often when you already have a dominant board state.

Note: also keep Crazed Alchemist as it can insta-kill a Doomsayer versus control and give good trades onto Acolyte of Pain and Bloodhoof Brave versus tempo.

Versus shaman you want to go for your early game power plays. Your one drops and Imp Gang Boss are key in this matchup as they will stop the early pressure from the shaman. Unless you can absolutely afford to, don't try to play around Lightning Storm as it isn't being run in Aggro shaman and has been cut or been run as a 1-off in Midrange shaman.

Note: also keep Crazed Alchemist as it can insta-kill any totem that is being played.

If you already have a good 1 drop, keep Dark Peddler

Playing versus rogue is like playing versus tempo warrior. The matchup is bad, so to increase your chances you should just go #YOLO sometimes. Try to play around Fan of Knives if you can afford to. Try to push face alot, because you can often finish the rogue with your Leeroy combo as it lacks heal.

Control Paladin is a tricky matchup. The way you win is by mounting the pressure and forcing them to use their AoE clears early. Try to tap a lot so that you can refill straight away after they clear your board.

Note: also keep Crazed Alchemist as it can insta-kill a Doomsayer.

Hunter should be an easy matchup. Explosive Trap is rarely present in the current hunter builds and Unleash the Hounds is often included as a 1-off. Just try to build an early board by making efficient trades. Try to clear up any beasts they play to avoid giving them Houndmaster value. This is the only matchup where you keep Mortal Coil, because it counters an early Fiery Bat

Playing versus druid is pretty straight forward. Fight for the board and concede if they innervate something big on turn 1 :-).   ----- Also try to play around Swipe if possible.

So playing versus warlock. If it's a zoo mirror make the most efficient trades possible. The key rule to this matchup is ALWAYS TRADE. Sometimes even trading a 8/8 into a 2/2 knife juggler is correct if it preserves your board. Versus reno you ideally want to set up a scenario where you either rush them down before turn 6 (which is kinda unlikely) or you set up such a huge board where you win even if they have reno. Playing around Demonwrath and Hellfire is key.

Versus freeze mage you're basically RIP if they freeze your board and play a doomsayer which you can't answer. That's why Crazed Alchemist is super key in this matchup. Always keep it and even try to mulligan for it. Against tempo mage, just play the board control game and hope they don't get the coin :-).

Note: also keep Crazed Alchemist as it can insta-kill a Doomsayer.

So priest is probably one of the hardest classes out there to beat. The combination of single target removal for small aswell as big threats, 4 AoE board clears and unlimited heals make it very hard to beat it. The way you win is by playing around the infamous Auchenai Soulpriest + Circle of Healing combination on turn 4, the turn 5 board clears (Excavated Evil for control priest, Holy Nova for dragon priest, and Cabal Shadow Priest on 6.

All credit for the basic construction of this deck should go to Chakki. He got first place at Dreamhack Austin using a list very similar to this one.

I felt like the main reason that Sea Giant was being played before was due to the high amount of zoo mirrors and secret paladins. Nowadays Sea giant is often a dead card or a 8/8 for 7 or 8 mana. I felt like horserider fills a good role in this burst oriented list as flexible trading minion in the early to mid stages of the game or as a finisher in the late stages when you don't draw Leeroy.

In this Doomsayer meta, an unanswered doomsayer often leads to an instant loss as you not only lose your board, but also get denied from developing further for a turn. Now that the silence effect of Ironbeak Owl is too expensive, Alchemist provides a good alternative. Asides from that it is also a very flexible card for trading purposes.

These are some viable replacements if you don't have dust for the legendaries in this deck: 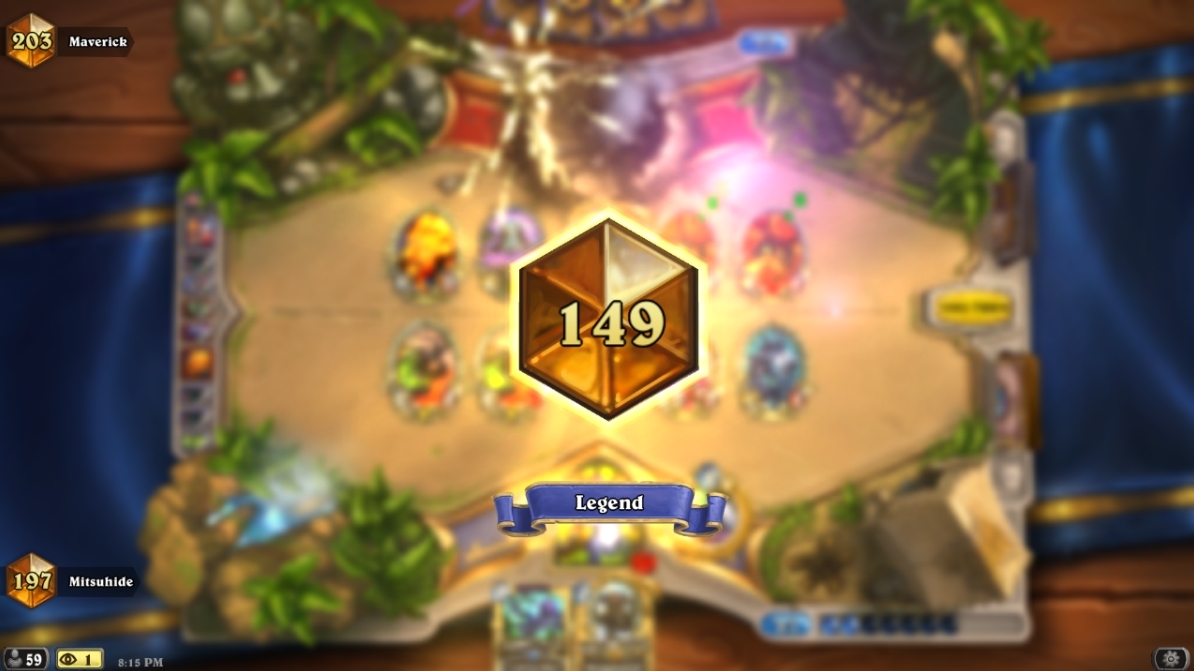 ^ win versus Maverick on ladder :-} #ROLEPLAYING

To see the deck in action, check out the links below. Send me a message to get your game-play video featured here!

If you enjoyed this guide, please make sure to leave an upvote :-)