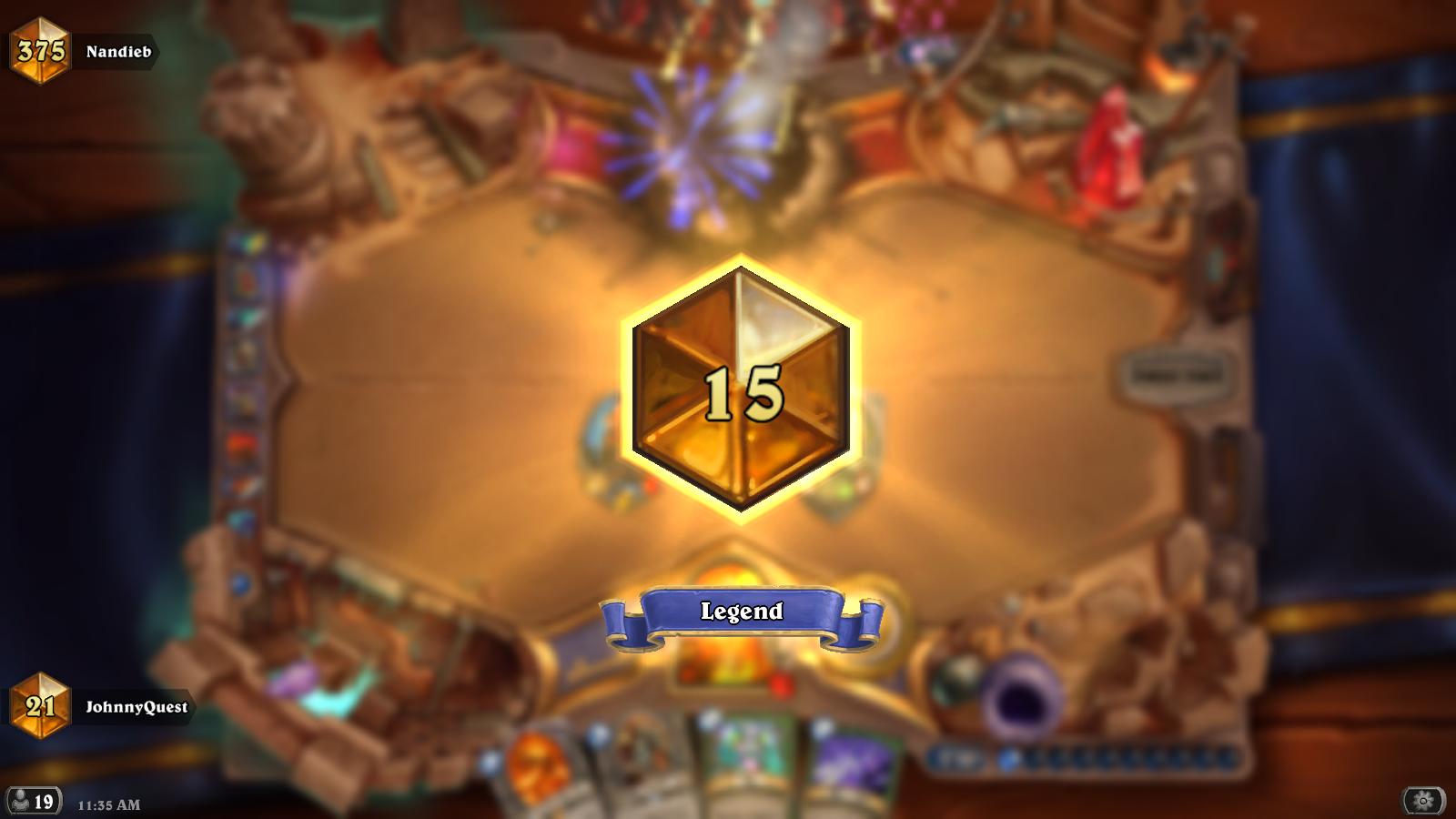 Rank 15 is the lowest I reached with this deck.

Went from rank 3 to rank 38 legend in a little over a day, will do write up if gets enough votes. Pretty typical Control warrior

Zoo is a pretty good matchup for this specific type of Control Warrior, you want to keep the board clear as much as possible with the weapons and early minions such as Armorsmith and Acolyte of Pain. Be very careful with the use or your Revenge and Brawl as the zoo can fill the board again quite quickly. I like to Brawl when the Zoo player is running low on cards or when I have no other option.  Also keep in mind that Revenge is often a game ender to the Zoo player when used while you are below 13 life as it's a very good board clear.  Keep your Execute and Shield Slams for their bigger minions.

Reno is more about building armor and removing their big threats when they come out. Can be a more difficult match up and can be pretty tough once Lord Jaraxxus comes into play. Once that happens try and burst him down with Grommash Hellscream or use The golden monkey to take him into fatigue.

Against miracle it's all about building armor and removing Gadgetzan Auctioneer as quickly as possible. Keep Brawl for when they fill the board and use Conceal. Remove any big threats when you can so they have less potential for a final game ending burst.

When facing Shaman it's all about the removal of their early minions and totems.  Use weapons to remove and small threats while using cards like Revenge and Ravaging Ghoul to remove the totems.  The real MVP of this match up is Baron Geddon as he can completely remove and entire boards worth of totems in just a single turn. Use other sources of removal for their bigger threats then run away with the game with cards like Harrison Jones and Justicar Trueheart.

Against control warrior it's all about who can be more greedy and get away with it. Mulligan hard for Elise Starseeker and Justicar Trueheart as they are the most important cards in this matchup.  Something to always keep in mind is how many cards you and your opponent are drawing as to you always want to be ahead heading into the fatigue game.  Remove big minions with Gorehowl to save other removals and keep Harrison Jones for their Gorehowl as that can be a huge swing in tempo.

Against patron its all about have a the Brawl whenever they have their big Patron turn.  It's usually down hill from there for them after you pull that off.  Try and save your other removal for threats like Ragnaros the Firelord and Grommash Hellscream and you should win the majority of this match up.

The majority of Paladin in this meta seems to be the N'Zoth,the Corrupter deck. Always keep at least one  Brawl for when he plays N'Zoth,the Corrupter and remove his smaller threats with weapons and Ravaging Ghoul.  Keep Control of the board as much as possible while being very cautious of their Equality Wild Pyromancer combo.  If it goes into fatigue you have a good chance of winning with the armor built up throughout the game and with the Golden Monkey.

Against tempo mage it's very important to keep control of the board.  Use weapons to remove their early threats and always make sure you have a way to remove Flamewaker as you can go downhill in a hurry if it stays on board long enough. Armor up as much as possible and get good trades with your minions. Bash is a great way to remove Ethereal Conjurer and Gorehowl will come up huge for you in this match up.

Against Freeze mage just armor up every turn.

Against midrange you want to be able to remove their board as efficiently as possible.  Hunter has a lot of 1 and 2 health minions so cards like Revenge and  Ravaging Ghoul can devastate a hunters board very quickly.  Use other removal for their big threats like Savannah Highmane and use Baron Geddon to clean up anything that's left.  Hunter lacks good card draw so if you can sustain their early blows you should be able to just ware them down with Ragnaros the Firelord and Justicar Trueheart.

Is their a better feeling than knowing you won't instantly die to combo anymore?  In this match up your control just wins out. remove minions while putting your own down and once you get to Ragnaros the Firelord and Ysera the druid can pretty much do nothing about it. This a very favorable match up for the Control Warrior now.

This matchup is pretty much the same as the Control Warrior match up. Use weapons and Bash to remove their minions while also being very cautious for the potential Auchenai Soulpriest burst.  Justicar Trueheart is a big card to find in this match up to keep tanking up for the fatigue game because this match up will probably go there. Use Brawl if they get to heavy on board for a reset and just prepare for a long intense game.

Hey guys, I just want to thank everyone for the support as this is my first deck I've ever posted on here. Let me know how I did on this write up and I wish everyone success in the future using this deck!