Hi, this is MarkW, a Hong Kong player in EU.

UPDATE: Swapped a Shadowstep with a Vanish. Been trying this for the past few days, 12-1 (From 1-3 May). Swapped 2 Wolfrider for 2 Argent Horserider, Xaril for Edwin VanCleef

Since 11:30 last night, I've been playing ever since. The trend almost immediately set on C'Thun, and it has been frustrating.

This is the new solution. 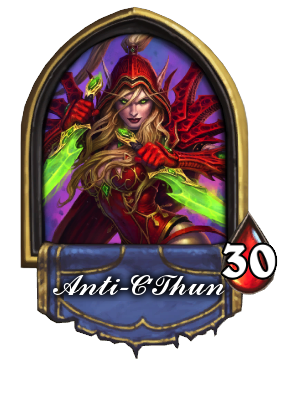 Aggro Rogue was a Top Tier deck during Vanilla. It has always been very explosive with even more burst  than the notorious Face Hunter. The downfall of the deck was the increase of Warrior decks and the prevalence of strong Deathrattle minions like Haunted Creeper that trade favorably into your one health minions.

This kind of proactive, consistent decks that punish inconsistencies from other decks. The first few days or weeks you will find a lot of bad slower decks, that frequently stumble if confronted with a high-pressure deck.

Because of the decks high density of 1 mana minions and the very consistent initial high pressure output (you can build a big board rather quickly), you put your opponent on a time constraint. Using removal or a hero power on Pit Snake will put him even further behind. And sometimes your opponent can’t remove the Pit Snake, and is then  in a terrible spot.

Why did I choose these cards:

At first, you might look at this card and think it’s bad, because it only has one health and your opponent can just use his hero power and ping it and then it’s gone. Yes of course he can do that, but Aggro Rogue is a blistering fast aggressive deck. Very often your opponent will lose a lot of tempo by using two mana for a hero power. Imagine the following situation: It is turn 5 and you have a Bladed Cultist, Argent Squire and Pit Snake against an empty board of a Druid. He simply can’t play Druid of the Claw, he has to use his hero power in favor of playing a minion. That is a huge tempo loss for the Druid and Pit Snake is even more potent against Classes that don’t have a ping hero power like Shaman. Flamewreathed Faceless will be a very popular card and with Aggro Rogue you not only have Sap as a very powerful answer, you also can have Pit Snake on the board, which the Shaman needs to remove before he can play his 7/7.

Because of the decks high density of 1 mana minions and the very consistent initial high pressure output (you can build a big board rather quickly), you put your opponent on a time constraint. Using removal or a hero power on Pit Snake will put him even further behind. And sometimes your opponent can’t remove the Pit Snake, and is then  in a terrible spot.

During the first few turns you want to have board control and try to keep it by making favorable trades. After the early stages of the game, there are two possible scenarios. Your opponent can’t get board control and will simply lose, or he is regaining board control. In the later case you want to start assembling some burst and possibly use some card draw to draw into it. Coldlight Oracle and Shadowstep will help you doing that. A combination of Southsea Deckhand, Wolfrider, Leeroy Jenkins, Cold Blood, Eviscerate and Shadowstep will give you an abundance of possibilities to finish your opponent from a very high lifetotal (15-20+).

At first I did not want to publish this deck because I think it is really strong and I want to finish at a high legend Rank, but after some consideration, I have chosen otherwise. Because the deck is very similar to the old Backspace Aggro Rogue, it is actually rather hard to play. For example cards like Shadowstep and Coldlight Oracle are not easy to use optimally and the opimal usage is different in some matchups and game states. Skill wise there are literally worlds between this deck and something like Aggro Paladin or Aggro Shaman. So when you start playing the deck, don’t expect a lot of miracles, because it will take quite some time to play the deck very well if you are not familar with the old Backspace Aggro Rogue.

King Mukla can be a very good addition to the deck, especially with the nerf to Big Game Hunter. Your opponent can’t feed Mukla with the Bananas and then use BGH. Mukla is very strong against Druid and Control decks. But he is rather bad against other aggressive decks, so I’m not sure.

I think Control Warrior and some sort of Taunt Druid will be rather difficult matchups. ButTaunt Druid has a very high chance to just be a shitty deck. The lack of good card draw, good mass removal, good removal for bigger minions and the lack of any kind of burst make Taunt Druid look rather bad to me. I don’t see this deck sticking around. Of course people will try playing it, and get farmed for several days by Shamans, Control Paladins, Freeze Mages and even Control Warriors.

winrate (Need more games to do so.) 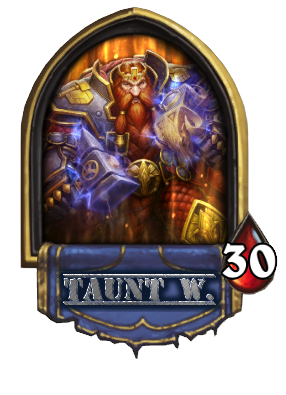 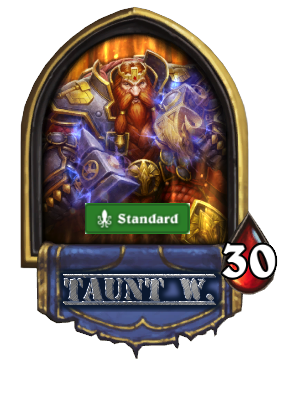