Hi everyone! I'm ataraxial and I climbed from Rank 5 to Legend with this deck at a 75% winrate. This is the spiritual successor to Oil Rogue, keeping the same tempo elements and spell synergies while adapting to the loss of Blade Flurry and Tinker's Sharpsword Oil. 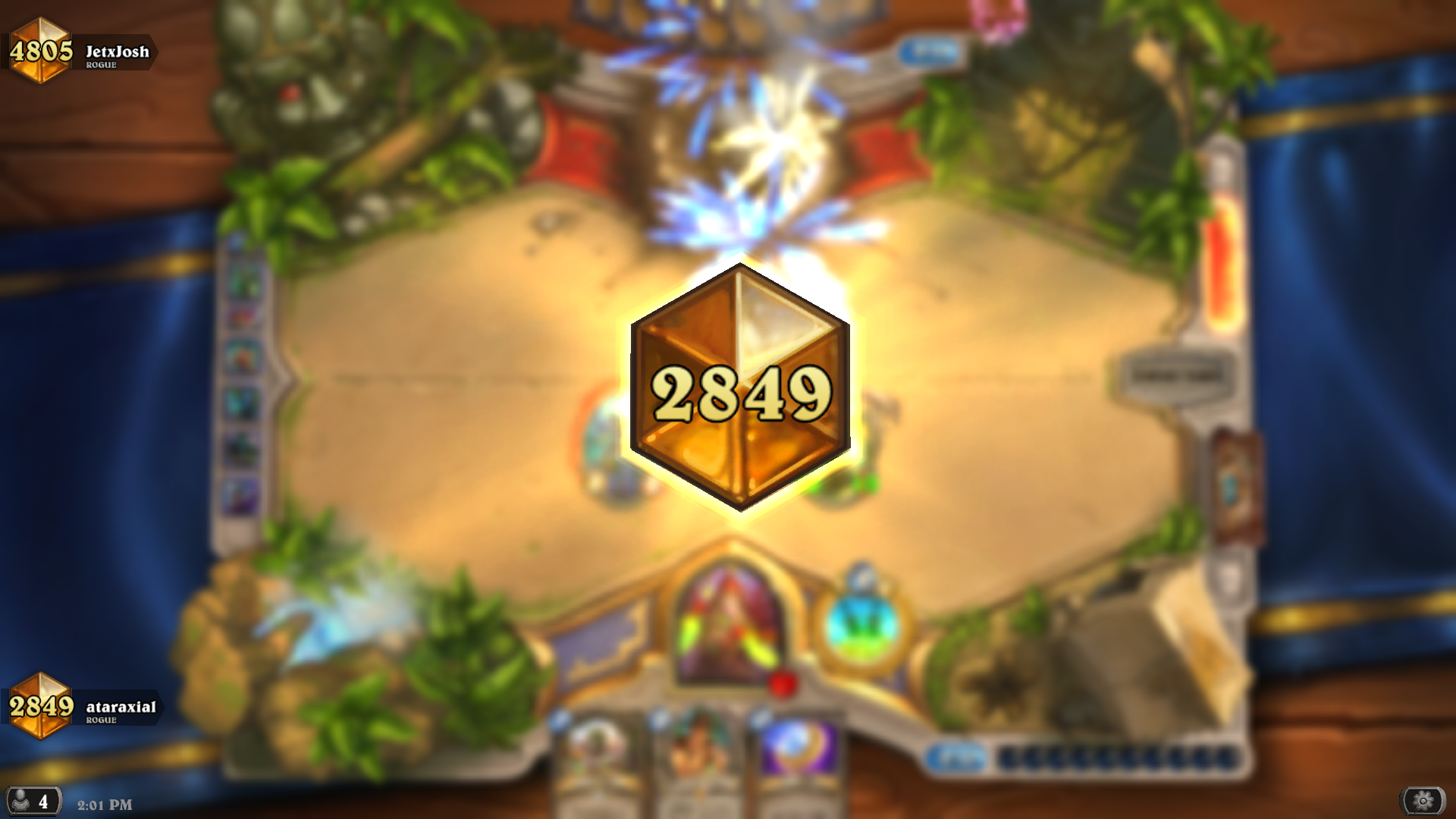 This deck boasts strong matchups across the field, being able to out-race aggressive decks and out-tempo control decks. With a slower meta and no more problematic deathrattle minions in Standard, Rogue's efficient removals are stronger than ever at controlling the board and generating tempo. And with silence nerfed and weaker openings from aggressive and midrange decks alike, the classic Rogue minions of Violet Teacher and Edwin VanCleef can dominate the game as early as turn 3. 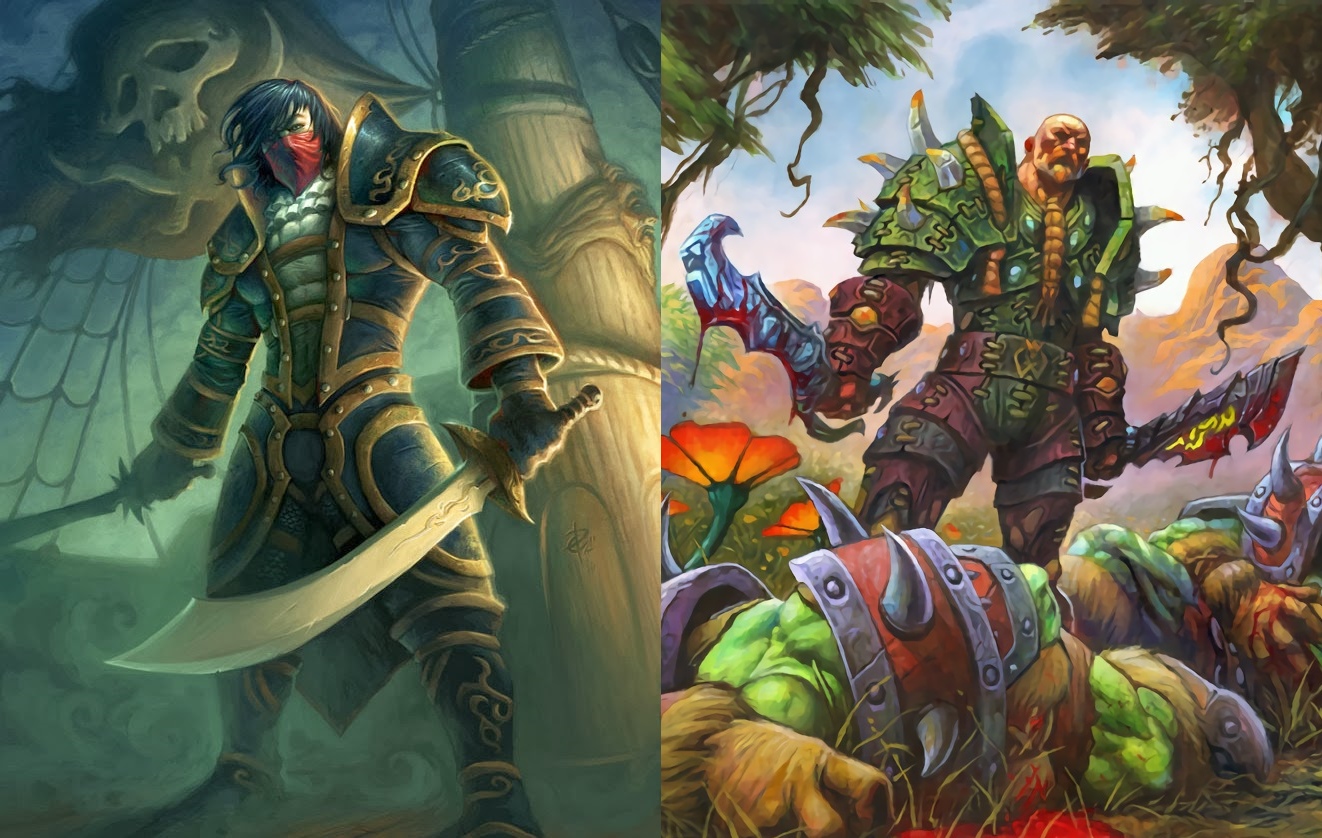 The key cards which compensate for the loss of Oil/Flurry and help adapt to the current meta are Shadow Strike, Undercity Valiant, and Cold Blood. Shadow Strike is an efficient removal with strong synergies; for instance Teacher+Prep+Shadow Strike is a powerful turn 4 play that can decide the game. Undercity Valiant serves as a proactive 2-drop that lines up well against the abundance of 3-health minions in the meta, especially when combo'd with Backstab. Finally, Cold Blood is a flexible win condition, allowing you to pressure and race at any point in the game and doubling as a 1 mana Eviscerate when you need to use it to trade.

Backstab, Undercity Valiant, Argent Horserider, and SI:7 Agent always. Teacher and Pillager in slow matchups or if you have a curve up to 4 already.

Efficiently remove your opponent's minions while developing a strong board that can then freely go face. Generally you want to value your minions more than your spells as repetitive face damage via minions is your primary win condition.

It is extremely important to plan out your curve so that you are using as much of your mana as possible each turn and thus generating the most tempo over the long term. In particular, a key skill is knowing when you should Sprint. You should almost never Sprint if you have a strong on-curve play; the one exception is if you are playing around a board clear. However, if your other options don't saturate your mana, especially on turn 7, you should Sprint and make up for the tempo loss on the following turns. Making the off-curve play will often force you to continue making weak tempo plays while Sprint sits dead in your hand. With this in mind, it's important to set up for Sprint turns by creating as favorable of a board state as possible in the turn before, including holding onto dagger charges instead of hitting face.

It's also important to take risks when the situation calls for it. Using Cold Bloods on minions in order to pressure face is often the correct play if it fits the curve and you're not blatantly playing into something. Not only do you get the guaranteed 4 face damage and potentially a token from Violet Teacher, you force your opponent to play more defensively. Instead of making their highest tempo play, they will have to use removal or heal or taunt up. Similarly, it's generally correct to go all in when you are running out of steam without a Sprint in hand, i.e. putting high power on board via VanCleef and Cold Blood and going face. Instead of playing safe and guaranteeing your loss, it's better to push for as much damage as you can and hope that your opponent either blanks on his answers or you draw into the last points of damage you need to get the clutch win.

Druid: Heavily favored. Shadow Strike and Sap make it extremely easy to gain initiative even when they ramp well, and Druids struggle to swing back tempo once they're behind. Just make sure to not overcommit into Swipe and try to save your Cold Bloods for when they've exhausted their removal. Assassinate is a strong tech option for this matchup, as it basically guarantees you'll have an answer to any huge taunts they drop even if you use your Saps for early tempo.

Hunter: Favored to even. Cold Blood allows you to outrace Hunters as long as you're on the board, so it mostly comes down to whether you get your Backstabs and early drops. The slower the Hunter deck the more favored the matchup, as having a Highmane Sapped is a huge tempo loss.

Freeze Mage: Favored to even. If you get your early drops you should have enough pressure to win. As soon as you recognize the matchup as Freeze Mage, get as much power on board as possible as early as possible (Edwin VanCleef is ideal for this). Doomsayers are generally a non-issue with the large amount of removal in this deck.

Tempo Mage: Even. This matchup is all about whether you have the answers to their early minions. If you can remove their Mana Wyrms, Apprentices, and Flamewakers quickly and efficiently, you win. If not, you lose. Going into later turns be conscious of your health total, and don't overextend into potential Flamestrike when you don't need to.

Paladin: Varies. Hyper-aggressive Divine Favor lists are slightly unfavored, while more midrangy lists are favored. Control/N'zoth is even as they have strong healing and answers but you can still pressure them hard enough depending on draws.

Priest: Favored. Your removals are extremely powerful against Priest, similar to the Druid matchup, but Priests are better at playing from behind. In particular, you need to play around Holy Nova and Excavated Evil as best as you can. Priest is one of the matchups where you sometimes need to take risks in order to find lethal before you run out of steam, so if in doubt, it's probably correct to go all in.

Rogue: Favored. Obviously the mirror would be even, but both Control/N'zoth and Miracle lists are slower which puts you at a significant advantage.

Shaman: Favored to even. It's possible to completely blow out Shamans with efficient combo plays to gain board and Cold Bloods to pressure/race, but it's also possible to lose in spectacular fashion if they get a strong opening while your deck decides you don't need your Backstabs and Preps today. It all comes down to getting and maintaining early board control, as once Shaman has board, it's very hard to contest regardless of the archetype. Undercity Valiant is an extremely important card in this matchup due to how well it lines up with their early minions. Harrison Jones significantly improves this matchup, as your main weakness is to aggressive Shamans running Doomhammer.

Warlock: Favored. Your early game matches up very well against Zoolock, and you generally put on too much pressure for Renolock to stabilize in time. Violet Teacher is especially powerful as no Warlock variants have a good answer to a Teacher on an empty board, and Zoolock in particular has huge trouble dealing with the spawned tokens.

Warrior: Unfavored to even. Control Warrior is winnable, but difficult. You need to find a way to stick a board, for instance flooding the board with tokens when they don't have AOE or making a big VanCleef when they don't have Execute. Based on your hand, the best line of play may be to go all in super early instead of giving them time to draw into answers. Tempo Warrior is unfavored to even. They tend to match you in terms of tempo but depending on their draw tend to have more powerful plays in later turns. It's important to deny their draw and take appropriate risks to put on early pressure. Aggro Warrior is an even matchup, as while their weapons are strong against your minions, you have similarly efficient answers to their minions and Cold Bloods to race.

Edwin VanCleef: 2nd Undercity Valiant or Earthen Ring Farseer. Valiant is slightly preferred, especially when facing lots of zoo/aggro. However, Farseer is also a strong option since it can give significant tempo when you heal a damaged minion and can also heal face to help you race against face/aggro.

Bloodmage Thalnos: Best one-for-one replacement is Kobold Geomancer since Thalnos's main role is as a cheap spell damage enabler for Fan of Knives. However, my recommendation is to drop a copy of Fan as well and instead run Undercity Huckster and Dark Iron Skulker as stronger standalone options for "cycle" and AOE.

Harrison Jones: This slot was originally Assassinate, and swapping that back in is the best option. For anti-weapon tech, there's always Acidic Swamp Ooze, but Ooze doesn't provide the same weight that Harrison or Assassinate does. If you want to run Ooze, consider swapping out a Valiant or Horserider to run both Ooze and Assassinate.

The other cards in the deck are either basics/commons or are too important to be replaced.

5/30/2016: Assassinate replaced with Harrison Jones, second Undercity Valiant replaced with second Argent Horserider. Assassinate is still playable and a solid choice, but Harrison is super strong in the current meta. Horserider vs Valiant is also a meta call, as Valiant is stronger against aggro while Horserider is better against control. I found that I often liked playing Horserider proactively, so having two copies to guarantee a charger for Cold Blood burst seemed better as aggro died down towards the end of the season.

4/30/2016: Southsea Deckhand replaced with Argent Horserider. Both a lack of combo-independent 3-drops and the feeling that Deckhand was not quite heavy enough for its slot led to this change. Horserider has even better synergy with Cold Blood and makes up for its steeper cost by not requiring dagger. He particularly shines as a turn 3 play against weapon classes, especially Warrior where SI:7 would simply be Axe fodder.

4/27/2016: Deadly Poisons replaced with Undercity Valiants. Deadly is just too awkward to use to justify keeping around without Blade Flurry. It can sometimes provide a tempo advantage, but more often than not it's a Fiery War Axe that costs both your turn 2 and turn 3 and forces you to take a ton of damage. In later turns, you don't feel good about using Deadly unless you have a fresh dagger, which severely limits your options and often puts you in lose-lose situations where you either play off curve or lose combo effects. In comparison, Valiants are a strong proactive drop that allows you to feel good about using Backstab on turn 2 and are arguably just as good for reach (1 point of damage but it goes through taunts). This deck is already saturated with removal, so dropping the most awkward ones in favor of more minion bodies is a bit of a no-brainer and makes the deck much stronger overall.

If you liked the deck and the guide, please share and upvote! I also welcome any kind of feedback, so feel free to drop a comment with any thoughts or questions you might have. Stories of success are quite welcome as well. Good luck and have fun!