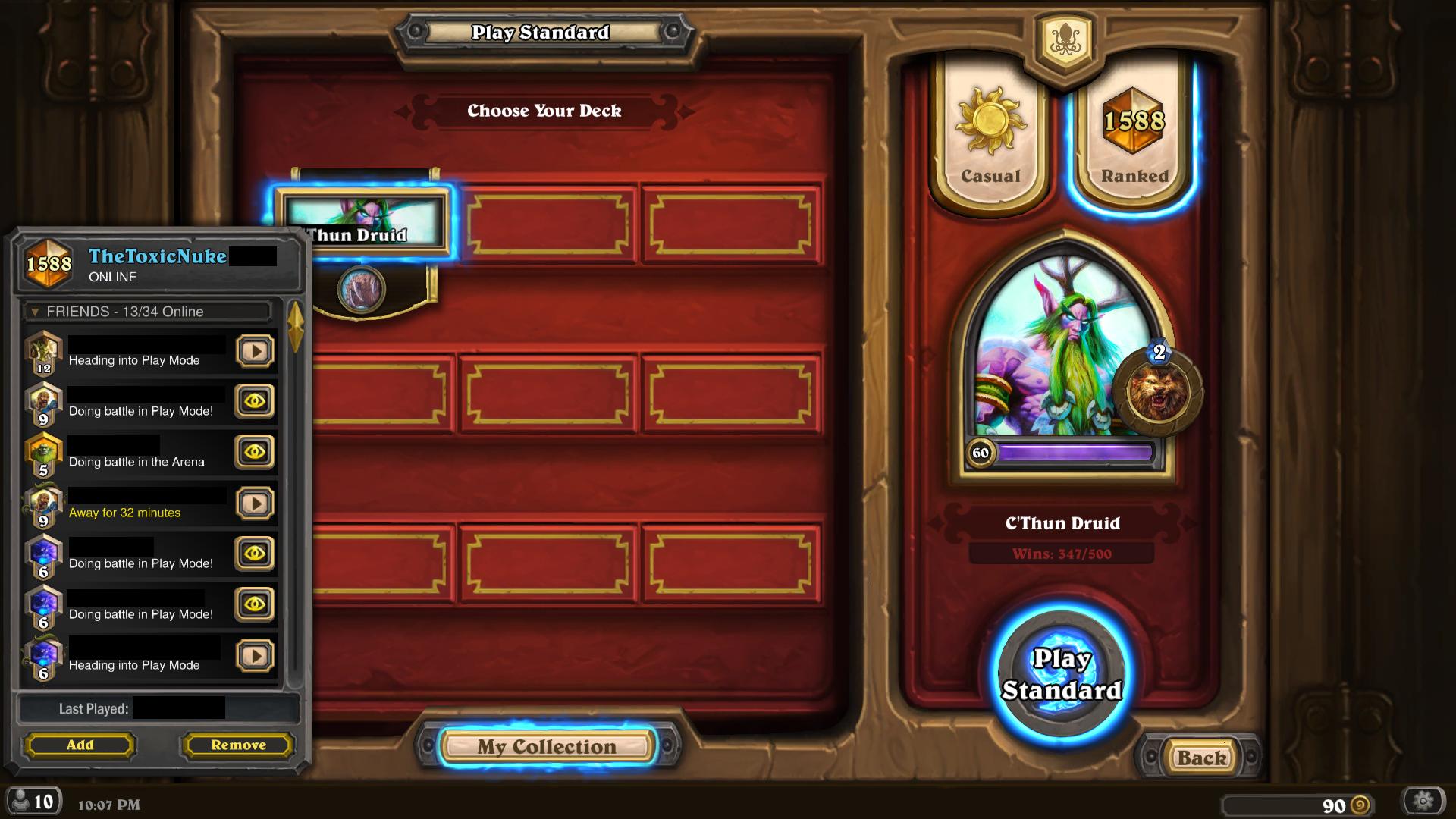 Hey everyone, I'm TheToxicNuke. You may remember me from my front-page Ramp Druid guide way back when Naxx came out. Now it's no secret that our favourite class bit the bullet kinda hard when in comes to the recent nerfs to classic cards. However, I happen to believe that a little corruption will keep Druid as (old) godly as ever.

Keep in mind that the main deck listed here is the framework for the deck (which does work quite well), but there are a few changes you can make to potentially have more success.

My experience with this deck has been absolutely absurdly positive, and for good reason. A C'Thun-centric deck does all of the things Druid loves: stays present on the board with decent minions until it drops its big friends, and delays for a ridiculous and game winning turn. Our ramp (Innervate, Wild Growth, and now the new Mire Keeper) helps extraordinarily with that first bit, allowing us to drop those big guys way earlier than we should be allowed, and we're able to delay our death while maintaining a serious board thanks to Druid's insane taunts long enough to crush them with a bunch of eyeballs.

Even if your C'Thun gets removed after its insane board clear and face damage, you have more than enough big guys in your deck to finish your opponent off. That's not to mention the insane possibilities with Doomcaller, as if just one of our favourite Old God wasn't already enough.

In theory this deck has excellent match-ups against all archetypes. Against control you can just overwhelm them with your generally decent minions. Against midrange you're not going to fall behind as it's so easy to play on curve with this deck (this is where Klaxxi Amber-Weaver really shines), and odds are your endgame minions are bigger than theirs. Against aggro it'll be tough for them to even touch your face since you have so many big taunts in Crazed Worshipper, Dark Arakkoa, Twin Emperor Vek'lor, and even a taunted C'Thun via Twilight Geomancer. Enough said.

Let's just get a few things out of the way. A lot of people are singing their praises about Brann Bronzebeard in C'Thun decks, and while obviously some spectacular stuff can occur with this, more often than not it's just going to be a lame body giving your C'Thun unnecessary extra buffs. The only cards Brann actually combos with are C'Thun, Twin Emperor Vek'lor (both of which are very rarely going to occur), and Disciple of C'Thun, which will happen pretty often but two extra damage on a three mana card is a pretty marginal increase in power to warrant an inclusion in your deck.

After some thought I've come to the conclusion that in such a C'Thun-heavy meta Sylvanas Windrunner is the perfect denial card. After a lot of experience in a mirror match up, I can confidently say that you're going to win 99.9% of the games in which you drop C'Thun before your opponent. If you have an empty board on turn 9 just slap down this lovely lady and you can practically hear your opponent weeping. But don't be afraid of playing her out if it means keeping up tempo as she'll almost always get at least a two for one.

The 6 drop slot as a whole is one with a lot of options, but of course you always want both Dark Arakkoa in there because that card is stupid good. The other two can be any combination of Ancient Harbinger, The Black Knight, Sylvanas Windrunner, and Skeram Cultist based on personal preference.

Mulligans are pretty straightforward with this deck but sometimes do require a bit of discretion.

Against midrange/control: It's just important that you curve out well. Keep Innervate, Wild Growth, and base your hand around playing something every turn on curve. You can be a little more greedy with your Klaxxi Amber-Weavers if it's not urgent that you play them and you already have a board presence.

Thanks for reading! A lot of work went into this guide, so if you enjoyed or had success with the deck, feel free to show your appreciation with an upvote. If you have any questions or comments you know exactly where to leave them, any questions will be answered and any feedback will be appreciated! Feel free to follow me at https://www.twitch.tv/TheToxicNuke21 where you may find me playing this deck from time to time. Maybe you could stand to learn something, who knows? Tune in!