UPDATE: Here is a standard mode version I came up with so far that is working around the classic card nerfs: http://www.hearthpwn.com/decks/473092-enter-beastmode-v2-standard (feel free to stop by and give any suggestions you might have).

UPDATE 2: I made a few changes to this deck to fit it more into the wild format, haven't tested the changes yet and I plan on mainly playing standard so try out the changes for yourself and see how you like them.

Hello folks, as some of you might of experienced the meta atm is really skewed up and no matter what you queue you get a counter (especially this early into the season). Earlier today I was on one of those runs and went from rank 6 back all the way to rank 9 playing all sorts of decks. So I decided to go out for a smoke and said to myself "If you are gonna keep losing all the time might as well do it trying out some new deck".

So I had an idea about making a Beast druid for a while, even had some very unsuccessful tries in the past in different type of meta. BUT to my huge surprise (I'm still not sure how) I started with a winstreak, I thought to myself "well ok, you just got lucky" and kept playing and playing and kept winning and winning up to a 18-4 score (rank 9 to rank 4) when I decided to stop and share this deck with you.

This deck has a whooping 29/30 PURE DRUID CARDS!!! Astonishing, I have never seen a deck with more than about 20-25 class cards MAX. And even the 30th card was Knight of the Wild until I realized that it only works if you have the card in your hand, so I just replaced it with Dr. Boom.

P.S. for those of you that don't know Druid of the Saber, Druid of the Flame, and Power of the Wild are counted as beasts.

Here are the updated deck stats (after 70 matches), games played on the EU ladder: 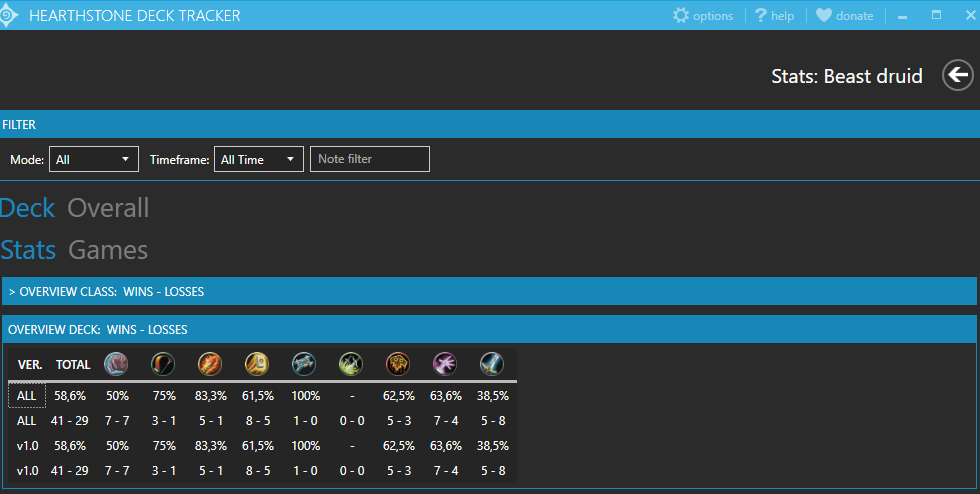 I agree that this isn't very diverse meta since I met 5 priests in a row not 30minutes before I started playing this deck but its still a nice chunk and anyway this deck was more meant to be a FUN DECK then a TOP TIER DECK.

NEW!!! Here is the second video that I promised covering the popular matchups that didn't make the cut in the first one (with also a word of gratitude to you guys at the start)

You can find the part 1 here, it is the initial winstreak I got.

Playstyle: This deck is somewhere in between aggro druid and midrange druid, you contest the board with your early game minions and then develop your midgame creatures into powerful finishes with savage roar or the full force+roar combo. So vs aggro play the early control game, but vs control play the aggressive game and try to pile up the damage as quickly as possible. Bare in mind that you don't have any card draws besides ancient of lores (at least until Mark of Y'Shaarj comes) so don't use your innervates and empty your hand on turn 3 because there is a chance you might have nothing to do the next few turns.

Mulligan(in order of importance):
Innervate, Living Roots, Darnassus Aspirant, Raven Idol, Druid of the Saber, Mounted Raptor + Innervate is what you want in most matchups.
Against zoo and paladin you might consider keeping Swipe and Keeper of the Grove especially if you already have Innervate.
Against warrior you might not want to keep Living Roots

I really hope you guys enjoy the deck! Cheers!!

Thanks so much to so many people that showed enough interest in the deck to made a video for it and here are quick links to their videos.