This deck is built to be able to handle early rush decks, survive strong mid games, and finish with some explosive end game plays.

At first glance it looks like a basic warrior control deck, but you add in a few cards and it completely shifts the ability to handle meta game decks such as kolento hunter, reynad zoo, and the new saturos aggro mage. 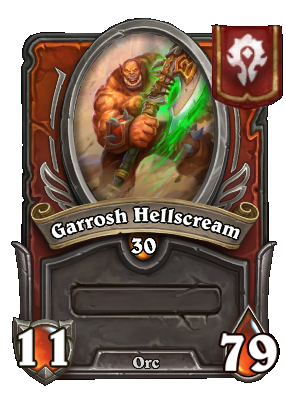 Sen'jin Shieldmasta: these stop aggro and mid range dead in their tracks, an armor smith behind a taz dingo can generate large amounts of armor and effective put their rush down to a halt.

Cleave: this is mainly added in because of zoo. 2 cost to remove a flame imp and a knife juggler is a pretty good deal, and it combos very will with Wild Pyromancer.

Wild Pyromancer: i cant even begin to describe how good this card is. you throw it down with a Cleave and a Slam and that full board from zoo or that unleash the skill from hunters turns into ashes as you completely shift the tempo in your favor for very low mana cost.

New-- Spellbreaker: i subbed out spell breaker for a Frothing Berserker. in the control matchups like druid, paladin, and handlock i find frothing under performing and i always lack a silence to stop that Twilight Drake [/card], [card] ancient of war , or Tirion Fordring. losing 1 frothing is not going to hurt your aggro matchups that much and a Spellbreaker can actually be pretty useful in zoo by silencing a buffed up minion and putting a decent 4/3 body on the board.

The basic early game: you use your Armorsmith  to gain armor to sustain your life against aggro, coupling an Armorsmith with a Frothing Berserker can be fairly deadly, as you can become the aggressor with a surprise 7/4 frothing after a Whirlwind.

Mid-game: your Sen'jin Shieldmasta  will prevent damage from coming through to you and Cairne Bloodhoof will provide a strong board , they easily carry you through to the late game in combination with removal spells such as Slam, Execute, and Brawl .

Late game: you have alexstraza to lower your oponents health to 15 then follow up next turn with a Grommash Hellscream+Cruel Taskmaster finish. if somehow your opponent still has the board in the mid/late game you have barron geddon to sweep up the board and setup for the big combo.

Wait.... wheres Gorehowl??: gorehowl is great in control match ups, but the new meta shift has caused a lot of grief with gorehowl. it is a useless card vs aggro decks as you want to take as little face damage as possible, and its such a late game card you barely get a chance to use it before the match is over. in control match ups more and more people are opting to put in Harrison Jones and Acidic Swamp Ooze. when harrison takes your gorehowl to the museum you waste 7 mana, a turn, and give your opponent a card and a 5/4. that sounds like a big bunch of nope to me

Deck strengths: with the new contributions, this deck is now suited up to beat: zoo, hunters, mages, druids, paladins and rogues. it makes control warrior way more versatile than before.

Deck weaknesses: handlock will ruin your day if your forced to use executes on twilight drakes, this matchup is exetremely favored to the handlock. priest can cause you issues by shadow word pain, it takes out frothing, armor smith, acolyte of pain, and tazdingo. leaving you struggling in the early starges, and then when you throw out that grommash it gets mind controlled. its just not a good time

after using the kokron elite instead of frothing i feel like it is a stronger choice for the current meta as a 4 damage removal and a decent 4/3 body. but using frothing is also still viable if your more comfortable with that.

i encourage you to leave comments and suggestions :P