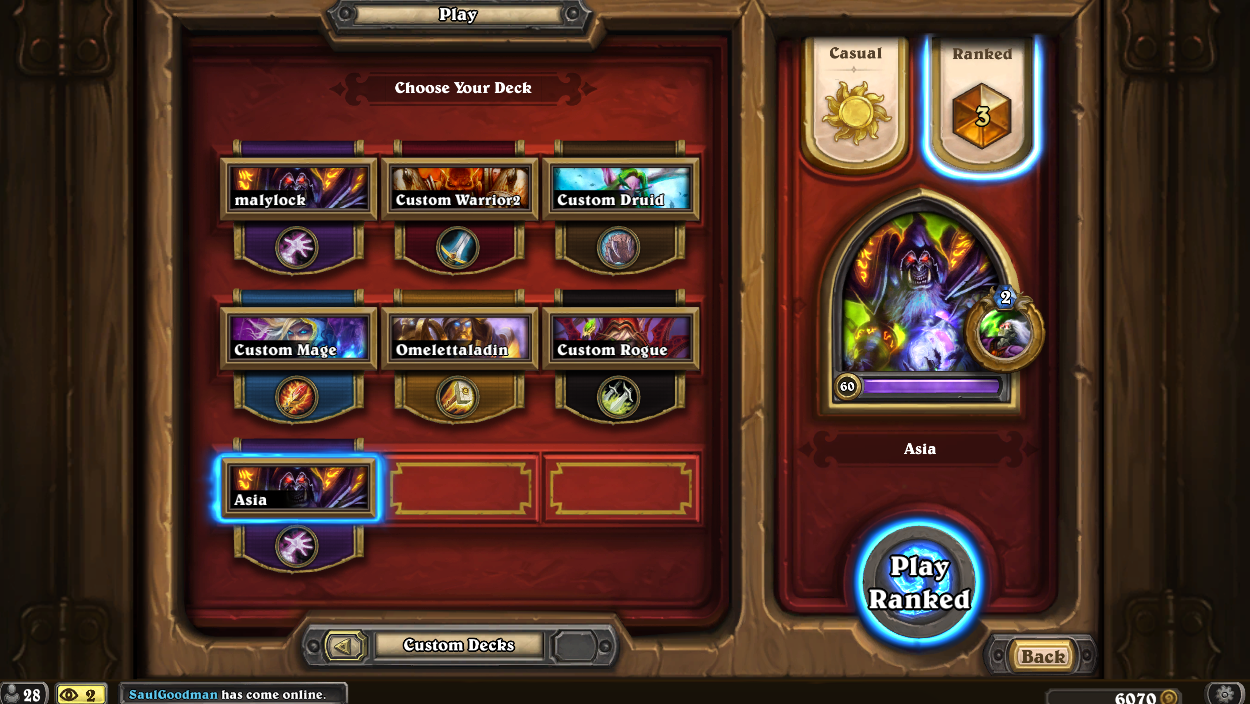 The game plan is a mixture between malylock and zoo lock. You play your minions free roll dmg and burst him down from 10-26 hp. Some matchups you trade with everything on board and play for board, while others your the aggro and go face most game. Its not an aggro deck, but more a burst/midrange deck like druid or zoo lock. Some matchups u will tap almost every turn while others you might not want to tap more then once. When to tap and when to not tap is generaly the hardest decision with this deck.

I wont write a mulligan for each class. I think this is a waste and theres is also a lot of variance so u kinda just have to figure out the min-max yourself. The general mulligan is look for 2 and 1 drops along with imp plosion. Even if juggler is a 2 drop it is still not a keep in most mulligans. The main mistake people do involves keeping juggler in matchups were it does nothing. Usualy imp gang boss and peddler along with a 1 drop is the main cards u will be looking for, but in some matchups there are more key cards. Owl is great vs mage and druid. Dark bomb is great if your going first in general, but vs druid its one off the most important cards. Implosion is a keep in most matchups due to it just being broken. Only matchups u wont be keeping imp plosion in is vs warrior and freeze mage. None off the high drop cards except shredder is a keep in general. Shredder is keep for the same reason as implosion, it is just broken. Both shredder and implosion usualy gives u a whole mana extra then a 4 mana card should. Shredder is a keep if u have low drops and always a keep in slow matchups. Mortal coil or any off the other 1 mana spells are never kept. Abusive is only a keep if you voidwalker or need a one drop vs hunter.

When do i use soulfire?

This is a tricky one. Soulfire is the hardest card to play correctly in this deck. Its a risk vs reward type card. If u have a 50/50 to discard a good card, but u can kill a huge minion and gain a board lead u will generaly always want to kill the minion. Soulfire is mostly used for board control as a last resort. All other options should be used before soulfire. It is important however that your not afraid to play it. A 4 dmg one mana spell is VERY good in most cases and the discard is often irelevant. It is best used along with drake for a 5 dmg removal or as burst dmg.

When do i trade?

You trade when u can gain a board lead or if u have to. It is very important to go face with this deck, but sometimes u can gain more dmg from trading or u just have to trade. In most matchups u will want to trade especially in the early game, but it all depends on were you are in the game. If u have come to the point were your starting to lose board or you have a ton off burst in hand u will want to start going face. Vs decks like warrior it is also better to go face if u think he will aoe next turn, same goes for priest.

Most of the decks that fight heavily for board u should be favored vs. Decks like aggro shaman,druid,zoo,paladin and camel hunter you are heavily favored vs (70%). Druid is the absolute best matchup and i almost consider it a free win if they dont have an insane double swipe hand. Aggro shaman follows close to druid and should be a very easy matchup if they dont have the nuts. If the aggro shaman never draws doomhammer u will always win. The bad matchups are the ones that either have tons of aoe or just tons of removal in general. Freeze mage,patron,priest and rouge are all hard matchups. Rouge is the absolute hardest and i consider it unwinable most games. Priest and patron is soft counters, while freeze mage is something between rouge and priest/patron. Freeze mage usualy depends on how much early game u have and owl. You would think cw and murloc pala would be bad matchups, but in fact they are not. Murloc paladin is an auto win and i havent lost the matchup once. This is due to you being able to tap into your combo and deal 20+ dmg to them before they are even half way into there combo. Control warrior is not as hard as u would think. Generaly its the same as murloc paladin. You tap into your combo and deal 20+ or u just overwhelm them early with minions. However both these matchups are really hard to play. You never want to overextend on to the board, always keep some minions in your hand and you should be fine. Drake also shines in both these matchups.

This deck has a huge number of spells. Drake has great synergy with these spells due to spell power and also makes it easier to cycle into burst and keep your hand size up after soulfire is used. Azure drake is also one off the best cards in the game in general. It used to be played in most decks in the game, but is now only reserved for combo decks that run a lot of dead cards.

What do i replace with lerroy?

Arcane golem is the best and only replacement.

In most matchups u will want to keep drake if u can play other cards. This is because the spell power is often more worth. U can also play the card u draw the same turn u play drake most of the time. Drake also has a bad body which means it dosent fight well for board.Leper gnome is better then voidwalker in aggro matchups, but walker and flame imp is better in control matchups. Vs shaman and hunter you should never tap more then twice IF THERE AGGRO. You often want to play abusive without getting the effect bonus vs aggro decks.