There are two classes I play to legend every season - warrior and priest. After a lot of experimenting in legend, I decide to share only the best versions that I get. I often see fun cards which potential hasn't been used in decks enough. Having tons of fun and climbing ranks at the same time is what makes the true magical experience of Hearthstone. This deck provided that joy for me and still does it.

Newest update: Added the almighty dragon Deathwing instead of Nefarian, which lead me to legend this season. With so many secret paladins and zoo decks, this addition was necessary to dominate those match-ups as the great last resort!

Important update: Changed 1x Fiery War Axe for 1x Armorsmith . Decided to update it here because it worked very well on the ladder which led me to top 150 legend. Both options are great, armorsmith just gives edge in games against some decks.

I decided to share the deck I made for intermediate players. Its primary purpose is to help players with the knowledge of the control warrior playstyle reach legend from ranks 1-5 or just steadily climb the legend ranks while having tons of fun! You can try it in other ranks too, but I would recommend going with patron warrior or priest if you want to climb faster until you start facing more skilled opponents. 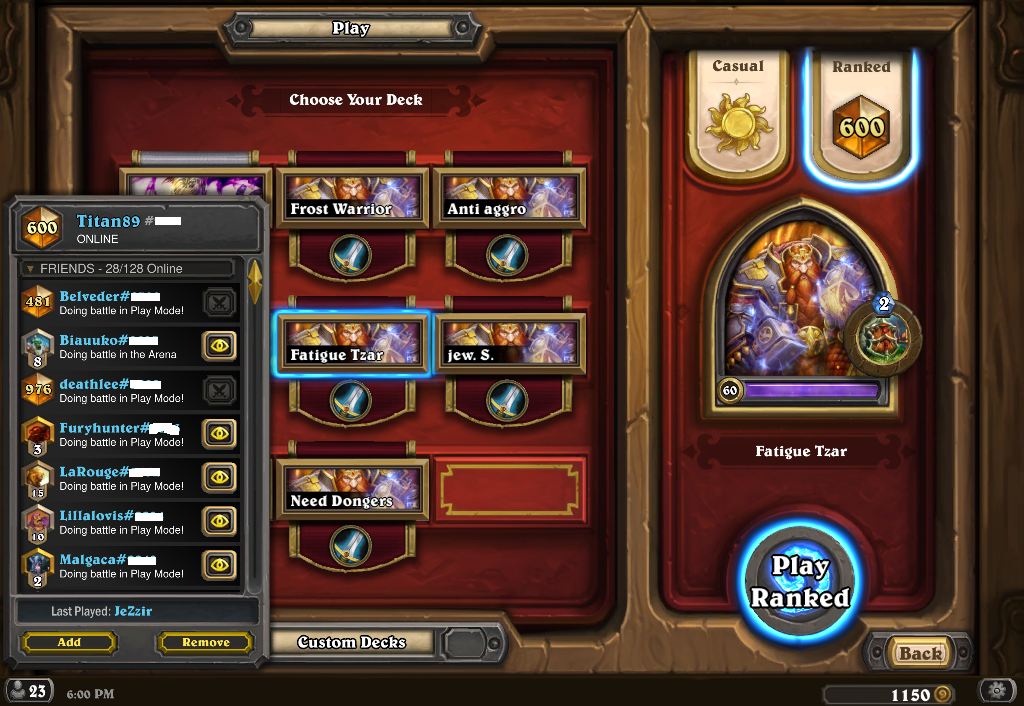 I played Jeweled Scarab in Reno warrior for the first time and fell in love with that card. Playing them instead of Acolyte of Pain is a great choice against slower decks and they do their role against aggro as well. Discover mechanic is the most fun mechanic ever and can actually win you games!

I'm not a fan of fatigue decks that are out there only to counter control decks. We have a ton of anti aggro tools. 2x Revenge and 2x Brawl are a must in this meta in my opinion. If we don't use them in a game against control, they will become legendaries by Elise Starseeker.

Nefarian and Nexus-Champion Saraad are fun and very viable choices in this deck that have a good chance of winning you games by themselves. I live for the moments where we get a Sacrificial Pact from Nefarian and instantly win a game against Lord Jaraxxus! If you really want to replace those, you can go for a card with a similar cost.

Be smart! Don't play your turns too fast. You have many choices to make while playing control warrior and you will get punished when making mistakes. I guess that makes control decks more enjoyable.

If you want to learn more about the playstyle of this deck, ask some question or just enjoy quality fun games in legend or arena, you can check out my stream www.twitch.tv/urkoth

Our legendary friend Nat played a very fun game and showed why Saraad is considered a mini ysera and the reason why I love that card so much.

Khristophesaurus had some fun games where he won a control warrior mirror without drawing justicar and took zoo to fatigue because you can do it with this deck if you wanna!