Hi guys, i am estadio7, in this season i reached legend first time using my secret paladin deck and i want to share it to everyone!
P.S. Please don't rate negative this deck cause it's secret paladin

Proofs of getting legend 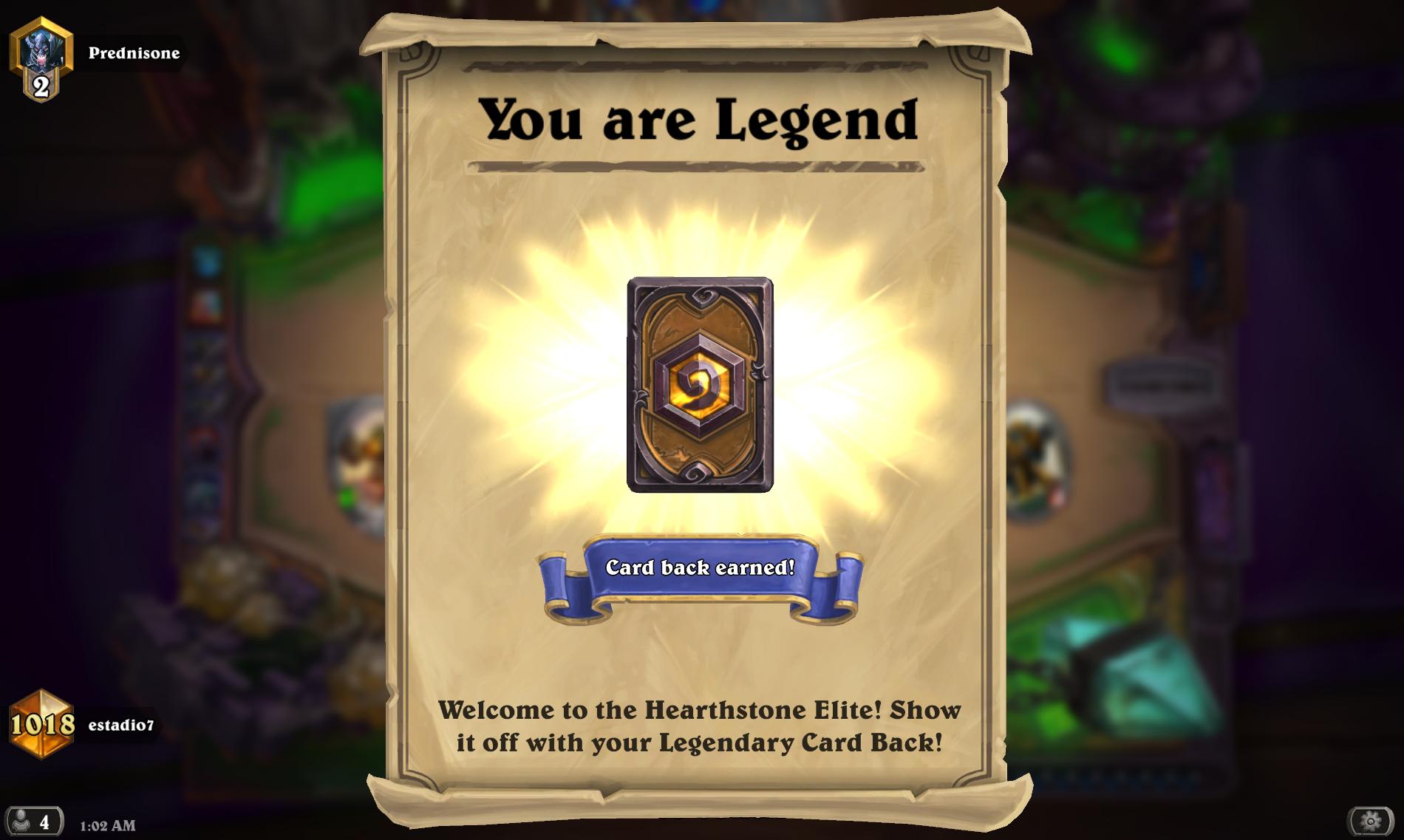 First of all, this deck requires board control, maybe it's strange for some kind of secret decks, but not for this one. There are a lot of secret paladin decks, but why this is better? It's not too much for crafting, u don't need to craft Tirion, this deck is very good without it.

I started to play this deck, when i was at 7 rank. I don't use Hearthtracker, but from 7 rank to Legend i won near 100 games.

+ Aldor Peacekeeper
First of all, this card help you like a 3-mana drop and disable big minions in reno-decks, control decks.
+ Defender of Argus
Good drop for Paladin, keep Aggro decks + help your minions to don't die from AOE.
+ Quartermaster
This is midrange deck, we have 2 Muster for Battle. This is good combo + in a lot of variations, we have combo with Ability of Hero.
+ Justicar Trueheart
Help you to get a more chances to win in a late-game + good combo with Quartermaster. Really good card in this meta, two 1/1 Silven Hand Recruits are really good instead of one, plus 6/3 a really hard to kill in case of no remuvals in opponent hand.

Vs Paladin :
Muster for Battle, Consecration (if you have Coin)

Vs Druid :
Coghammer, Noble Sacrifice, Keeper of Uldaman (if you have Coin)

Vs Priest :
Blessing of Kings (if you have Coin), Keeper of Uldaman, Ironbeak Owl

Vs Hunter :
Ironbeak Owl, Noble Sacrifice, Muster for Battle, Consecration, Keeper of Uldaman (if you have Coin) 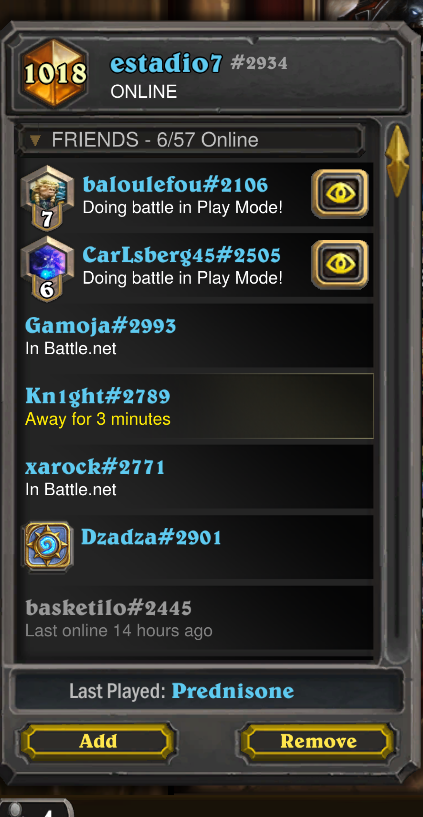 Control Warrior :
First of all, you need to control board, but don't try to win late game. Don't let him destroy your minions like Knife Juggler and Secretkeeper by Fiery War Axe. The best desicion it's Noble Sacrifice. Don't play a lot of expensive minions, never play all your hand, if Warrior have more than 4 cards, cause one Brawl ruin your game. Try to defense your the most damage-dealers minions without losing his HP. Always remember about weapons, Shield Slam, Execute and Brawl.

Freeze Mage :
For this matchup, you need to rush his face and destroy Ice Block as fast as you can, don't use your Keeper of Uldaman and try to use Repentance (if you have it in your hand), before Doomsayer (try to predict it, when you have full board). When your opponent can use Doomsayer and you don't have Repentance, leave one place for Keeper of Uldaman, you need to kill him in anyway. Remember about one place and just change your style of play to aggro vs Freeze Mage.

Reno Lock :
Don't forget about your cards and their quentity. You must have some cards in your hand before Reno or you can just YOLO rush and pray that he doesn't have Reno Jackson (P.S. It's not the best variant :D), so try to control board, but you can let stay alive for few his minions and try to go face every time when you can and at the same time control board.

Midrange Paladin :
You have really adventage on your opponent until the late game. So keep control board, he doesn't have powerful secrets in early game. If you have Consecration in your hand it's just amazing, because after this step and just destroying his Muster for Battle, game ends in 80%. If your opponent survive to 10 mana, still try to control board, but you know that he have just one Lay on Hands and probably Antique Healbot.

Tempo Mage :
The Easiest matchup for this deck. All that you need to do, just kill him early aggression. If you have Coin, play more aggresive. When his Flamewakers dead, just luck can help your opponent. You don't need to control all board, this kind of deck don't have heal, just don't let his the most important cards Sorcerer's Apprentice and Flamewaker stay alive on board.

Fatigue Priest :
As always Fatigue Priest have 3 variants to clear board : Auchenai Soulpriest + Circle of Healing, Lightbomb, Holy Nova. So, when you are playing vs this type of priest, the most important thing, it's not let to die all your minions from one of this board cleaners. Fatigue Priest doesn't have a lot of powerful minions, so don't forget about board control. When your board is not protected, clean all this board and try to get the more profit as you can, if your opponent must clean board.

Control Priest :
Control Priest have the same 3 variants to clear board. Style, which you are needed to play versus Control Priest not the same as Fatigue, there is some differents. Control Priest, have Powerful minions in late game (like Ysera), which can ruin your board, cause this is control deck, when your is midrange. Play as vs Fatigue Priest, but try to don't go to late game versus this type of deck, play sometimes more aggresive.

Fatigue Warrior :
First, and the most irritating thing, which you will meet, when playing vs this archetype of deck, that there is 2 Brawl`s , plus a lot of another remuvals, weapons and armor. Maybe it can be named the worth deck vs which you can play. Armorsmith, Shieldmaiden all this are lot of armor and if you want to win this kind of deck, you need to kill his Armorsmith and Acolyte of Pain in the same moment, when your opponent played them. After this step, control board, but always have minions for start to control board again after Brawl.

Midrange Druid :
Druid have few cards, which is really irritating. Living Roots, Swipe, Wrath and Druid of the Claw (sometimes) are stumbling blocks, which like a barrier to win. Try to don't fall into a trap and lose all your minions. If Druid doesn't do damage in your face, he will try to get late game, but when you see that there is 9 turn and you still have 20+ hp, you can go clear board and go face. Playing vs this kind of druid requires the feeling of moment when you need to go face.

Aggro Druid :
Aggro druid have Fel Reaver in 80% of decks. Keeper of Uldaman ruin all Aggro Druid game, because you destroy one of the most important minions in this deck. The only way, how you can lose, it is combo. So, you need to don't let him play combo. There are a lot of ways how, you can just defend your face, if you have 14 or less hp. First of all, it's heal from Truesilver Champion, or Taunt, or Noble Sacrifice. Versus Aggro Druid, you should control board, because you have more control cards than your opponent.

Face Shaman :
Face Shaman is really hard to win, but it is real. You need to control and rush at the same moment. Maybe it is seems to be unreal, but you don't need to control all board. Destroy the trumps of this deck like a Tunnel Trogg, Unbound Elemental (probably). Destroy a Spell Damage Totem, if he have it, and just go face, because it is the only deck versus which can destroy you until you will have 10-mana pool in 90% of occasions.

Zoo Lock :
Zoo have really powerful minions in early game, but he doesn't have board cleaners, so you can play everything what you want without fear, that your minions can die from Hellfire or Demonwrath. Control board - first rule, when you playing vs zoo lock, if you just control the board, let your opponent play until moment, when he will draw card from Hero Power and then play minions, after this moment game won at 90%, other 10% - it`s Doomguard +Power Overwhelming, if you are low HP.

OTK Warrior:
In New Season comes New Meta and somebody remembered about OTK Worgen Warrior and created OTK Warrior with Grim Patron and one combo Raging Worgen with more than 30 hp. So, if Grim Patron was slow deck in 50% occasions, now with Raging Worgen and few cards, which needed to combo, this deck is more slowly than earlier. You need to push and destroy his face earliear than he will get a lot of Patrons and after you will receive a 20 HP combo. So this kind of deck doesn't have a lot of minions, most of them requires Whirlwind or Death Bite, or they just Draw a card, so you can early push and kill before he reach a combo. 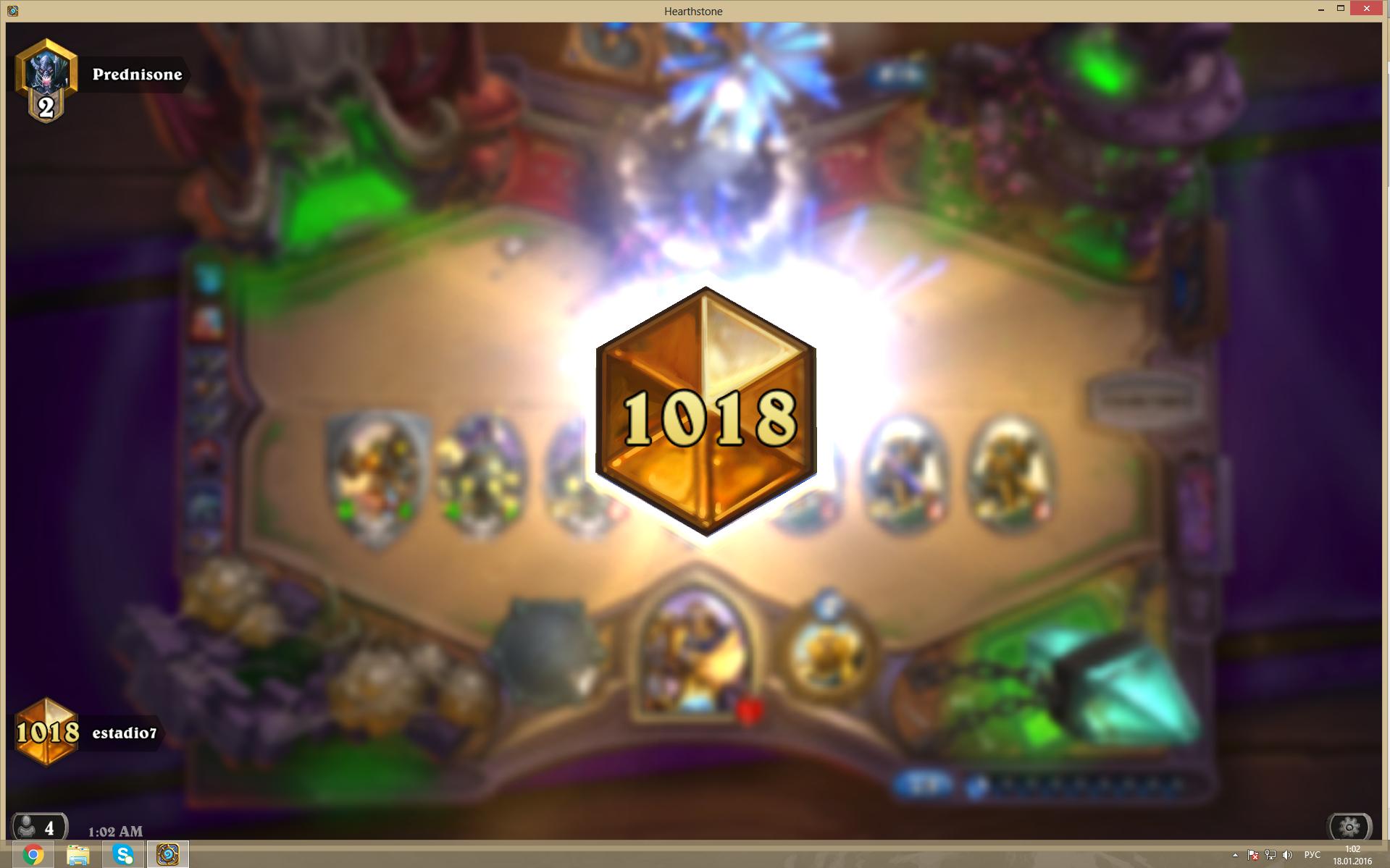 Support me if you like this deck, it's my first published deck :)