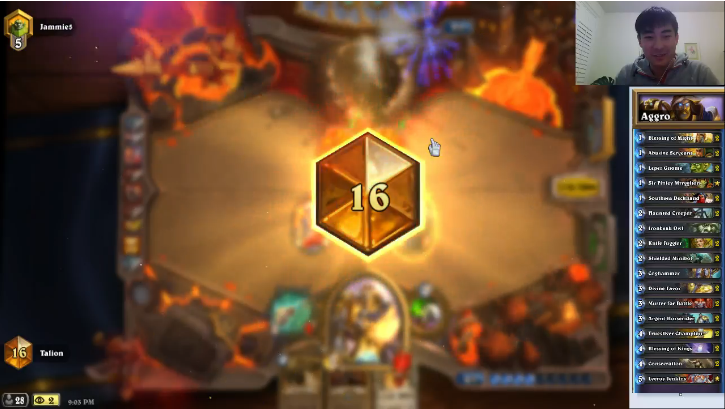 Hey guys, Talion here with a new take on an old favourite (for some people) that is the Aggro Paladin. This deck was quite popular months ago prior to the release of TGT because of its efficiency. Since then it’s been mostly replaced by the ubiquitous Secret Paladin. With this guide I hope to revitalize this archetype as I feel it is one of the strongest deck in the format right now.

One of the biggest advantage to playing Aggrodin is that it’s really cheap to put together. I almost always recommend it to newer players who are without a good cardpool/adventures. In fact, this time around I recommended the deck to a buddy of mine and decided to take the deck to legend on a whim. The deck was surprisingly smooth and resilient. I got to legend with this deck on the 4th day of the season within 68 wins (didn’t track losses but should be around 25 – 30) from rank 12 for my fastest legend climb.

This deck focuses on board control a lot more than other aggressive decks. Because you don’t have steady shots like hunter or plethora of burn like shaman, you rely more on your board for repetitive damage. Knowing when to trade and when to go face is crucial when playing this deck. Generally you should go for face unless there is a trade that will allow you to do more damage in the next couple of turns. Also try to recognize when your opponent will do the trade for you. That way, you can sneak in some more face damage. When in doubt you should probably go for face.

Turn 2 Shielded Minibot into Turn 3 Muster for Battle is probably the strongest opening in the metagame right now. This opening will threaten to do a lot of damage to the opponent if they don't have efficient answers. Using these cards in an aggressive shell works just as well as a midrange shell if not better. Instead of Mysterious Challenger, Dr. Boom and Tirion Fordring you have Leeroy Jenkins and Divine Favor for your lategame, which is better in some control matchups. Blessing of Kings also get better in an aggressive shell and being able to go face while your opponent does the trade for you will have you be up in attacks. If you consider all these points its not hard to see that the Aggro Paladin compares favourably to the Secret Paladin!

1x Sir Finley Mrrgglton: This card in my opinion, is a stronger version of Argent Squire. The 1/3 body is roughly the same as 1/1 with divine shield. The hero power isn’t always going to be an upgrade as you almost never want heal, armour up, dagger or totem. If you can pick up steady shot or life tap then you are going to be in a great position.

2x Southsea Deckhand: This card is very versatile. You can play it as a one drop but its best used when you have a weapon as a way to burst down the opponent. The fact that it cost 1 mana also makes it easy to throw on some buffs. So you can get in for a lot of charge damage.

1x Ironbeak Owl: Usually Aggro Paladin likes to play 2 copies of this card to deal with pesky taunts but I really dislike the reactive nature of this card to warrant playing 2 copies. In this deck have too many situational cards will result having more cards sitting in your hand which makes Divine Favor worse.

2x Consecration: This deck does rely on having board to win, so the longer you can hang on to the board the more likely you will be able to win. Consecration is one of your only comeback mechanism so it’s worth it to play 2 copies. It’s very good at punishing the opponent for value trading while you go for face.

1x Leeroy Jenkins: This card has a very high impact. Having it in your deck will give you outs to more situations that you otherwise wouldn’t have.

Druid has some really good cards against you such as Swipe, Keeper of the Grove and various taunts. If the druid has a slow start and has to react to you then you will be in good position. Look for a good curve out on the play. Shielded Minibot, Knife Juggler and Muster for Battle are great. On the draw Abusive Sergeant is better to take out Darnassus Aspirant.

It’s not uncommon to outrace a face hunter with this deck as you will have the board on them most of the time and can deal repetitive damage. Navigate well against Unleash the Hounds and Explosive Trap and you should be fine. Shielded Minibot and Muster for Battle are great while Knife Juggler is subpar as it lines up terribly against Mad Scientist.

Against tempo mage it’s all about how many relevant cards they can draw against you. Their best cards are Flamewaker, Arcane Missiles and Mana Wyrm. Mulligan is the same. Look for Shielded Minibot and Muster for Battle first. Haunted Creeper is also decent. Against freeze mage this is the best version of paladin to play. Your minions are somewhat sticky. You have a lot of charge, your weapons are hard for them to deal with and Divine Favor is going to carry you in the lategame.

These Matchups are very draw dependent. The person with Muster for Battle is going to be at a huge advantage. Secret Paladin sacrifices consistency for power so over a large sample size you should be ahead in that matchup. Having 2 Consecration also makes up for the games where you don’t have a Muster for Battle. Whereas the Secret Paladin plays 0-1 copies of the aoe. Against Midrange Paladin your goal is to go under them. Their premium removal in Aldor Peacekeeper and Keeper of Uldaman are not so useful here. Because of your lower curve you are more likely to have a stronger start and can snowball from there.

The priest has much larger minions and are hard to deal with as a result. Deathlord is going to ruin your day. Holy Nova and Cabal Shadow Priest are also annoying to say the least. Your best bet is to have a quick start and go under them. Buff cards such as Abusive Sergeant and Blessing of Kings are at a premium in this match up. If you are holding Divine Favor when they have Northshire Cleric you can just let them draw and blow them out with your draw spell afterwards.

I think we have a slight advantage in this matchup because of our abilities to get in a lot of damage. Oil rogue struggles with early pressure which is our strength. Muster for Battle gets countered by Fan of Knives but you should still keep it if you have it. Divine Favor is also quite useful in this matchup but I wouldn’t keep it. You want to naturally draw into it.

Barring the nut draw from Shaman, this matchup is actually pretty good. You are better at getting board control than the shaman which is going to result in a lot of repetitive damage. Shaman is no good at dealing with a big board and their overload spells are very punishing in this matchup. Even Divine Favour will likely get value because of all their overload.

The combination of 1 drop into Shielded Minibot into Muster for Battle is better than zoo’s best curve out. The longer you can hold onto the board the more likely you are going to win. Zoo doesn’t have any aoe while we have access to 2 copies of Consecration. Against Renolock Divine Favor is going to be your best card. The best way to play around Reno Jackson is to make them have it. They will always keep it in the opening hand so you pay attention to what cards they are holding from their mulligan you can get a better idea if they are holding Reno Jackson or not. If you have the luxury to play around it and want to do see then you should try to set up a big board so that you can immediately push in for a ton of damage after they heal.

All things considered, control warrior isn’t actually too bad. Your starts line up well against their weapons and Divine Favor will make sure you have enough gas in the lategame. Don’t be afraid of Acolyte of Pain especially if you are holding Divine Favor. Against the 1 charge Death's Bite, Blessing of Kings or equipping a weapon will work out well. Patron on the other hand might be the worst match up for this deck. Their plethora of Whirlwind effects and high health minion combined with their hero power makes this a very difficult matchup. Correctly navigating through their removal is the key to victory. Sometimes it’s important to recognize when you can’t play around the worst case scenario and take a more risky line.

Aggro Paladin is still a force to be reckoned with. The deck has access to the best start in the game as well as one of the best draw engine in the game which makes it very competitive. Its strength against opposing aggressive decks and its resilience against control decks make it a great deck for the current metagame. The deck itself is not too difficult to play as it has fewer lines than most decks but that means it’s all that more important to commit as few misplays as possible. Here are the vods to parts of my climb to legend if you want to see some game play with the deck (http://www.twitch.tv/talionhs/v/33219593 & http://www.twitch.tv/talionhs/v/33628438). I would really appreciate it if you can leave me a follow on twitch at www.twitch.tv/talionhs. As always, if you enjoyed this deck/guide please give it an upvote!