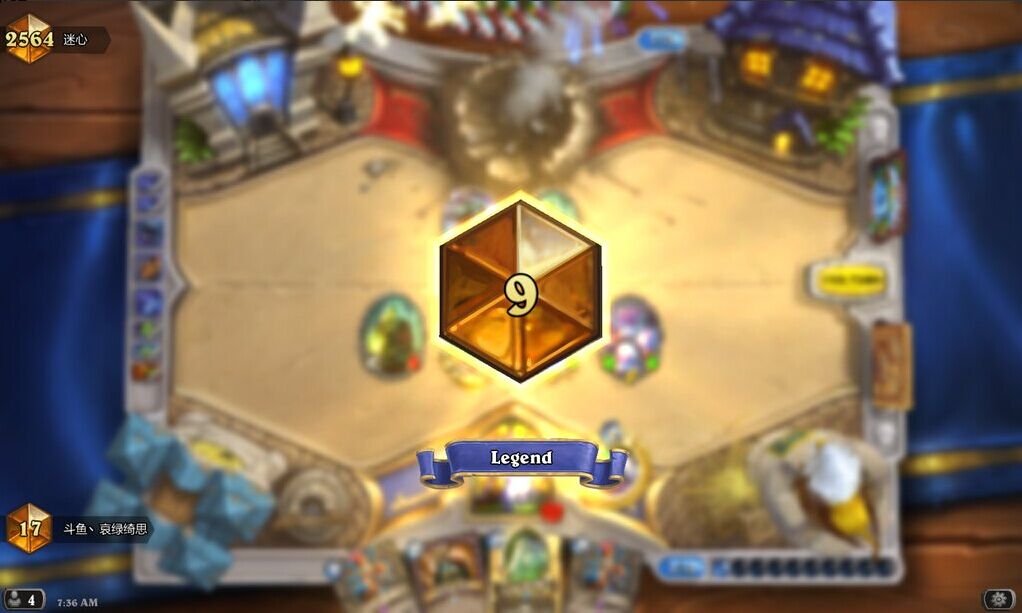 I use Arcane instead of Leeroy. Leeroy cost too much so it rely on Emperor too much. the key about OTK Warlock is to survive. damage is not Important because we will always have enough damage with Dark Peddler. Leeroy needs Emperor, so when Emperor comes even one turn late everything might go wrong. this is very obvious in playing against druid. one turn behind you might die of forse of nature combo.

we can get more po from Dark Peddler. mana can be reduced with Emperor. this is the reason why OTK lock got better after new expansion release.

Dark Peddler gives you more PO and soulfire against slow decks. more PO also allow you to get enough damage to kill mid range decks like druid more earlier. Against facedecks you might want coil for cycle to get hellfire and healing and taunt sooner. Other than that, corruption is good against twilight drake in mirror, good against deathlord. Other than those, elven archer good against druid, light warden can combo with your healings, void walker good against tokens from paladin. And sometimes you need boar. Remember it can face and charge too with PO + Faceless!!!! SMORC!

Brann is good to play with earthring farseer, abusive, healbot. it makes OTKlock survives much better! against slow deck you might want to save it for Dark Peddler to draw more PO. against druid you can play it on turn 3 to combo with abusive to kill some big creatures. against face deck it gives you as much healing as Reno.

Silencing taunt is not the way to use owl in this deck. owl is very Important against facedecks. Against mid range decks, owl is suppose to use on Sylvanas in mid lock, but OTKlock haven't got a lot of minions. so Sylvanas are always be cleared by hellfire. Silencing Sylvanas becomes not a big deal anymore, therefore I don’t think we need 2 silences.

In my opinion, the whole deck is in a perfect state because I tested it for many, many games already. The 1 copy of cards is okay because of Warlock hero power, but if you want to make any changes because you see a different meta, here is the advice.

Replace Farseer: Can heal your own minions, but not a strong tempo really. I add it because of face Hunter, this is the slot that should be the first to change.

Remember, I play on CN server legend with this deck so meta is different per server. Among all classes I played against,30% were Warlock,25% paladin, 25% druid, 10% mage+Hunter, 10% other classes.

the thing about playing against Warlock is that you don't know what kind of Warlock you are facing. the key about zoo is hellfire, draw it on the first 10 cards and you have large chance to win. the winrate against Renolock and malylock is very high. because they won't play around combo, they haven't got much taunt, and they are too slow to kill you.

same as Warlock, but you don't need to think about whether to keep hellfire or not anymore :) the key about secret paly is if you can deal with the first dr.6 successfully, you win. we have 2 BGH so not a big deal. for mid paladin, it's like free win....they can't kill you before you kill them.

keep: darkbomb, ImpGang Boss, chow, abusive, peddler, twilight drake (if you have need a coil to kill darnassus, keep it)

Moligan around how to kill darnassus at starting hand and starting game. we are good against darnassus compare to other midrange Warlocks, and also good at early game tempo. get PO from dark peddler to kill innervate creature. The key is to play around tempo, like a zoo maybe. Even using Faceless on a Ancient War is not bad because druid is very bad at clearing those annoying creatures and develop board. Prioritize and think about what your opponent will play next turn and disrupt his mana efficiency. Druid will feel so annoyed. when they start to come back on board around turn 9 or 10, that's the time we either have the board or we have enough damage for lethal.

This deck can't beat freeze mage. They will get enough time & damage to kill you before you kill them. We haven't got much minions and we tap often too. There's not much freeze on ladder so I don't want to change my deck for it. Not much to talk about. Don’t even think Kezan helps very much because we can’t kill them fast enough.

Against Flamewaker mage it's also hard. The problem of all midrange Warlock decks is they have a hard time killing flamewaker with empty board. So we need to evaluate what to kill and save our resource for the right target. Don’t be too crazy….remember flamewaker is not that strong without sorcerer apprentice. Don't be afaid to use double hellfire (play them over 2 turns) to kill flamewaker.

There's not much Hunter or shaman on high rank ladder compare to other classes, and almost all of Hunter are face Hunter. So I assume it's face Hunter to moligan. Also, no one plays anything but Aggro Shaman.

I like this version of Warlock because it's actually good against Hunter and Shaman! This deck solves a long time problem of midrange Warlock. Usually, Warlock struggle so much to stay alive through early game and cannot race Hunter because of a weak board. What always end up happening is Warlock barely survive for a few turns then finally killed with Hunter on full health. But this deck makes it very easy to survive and very easy to burst. you can actually race your opponent! You will always find out you have 10+ damage in hand and be ready to end the game if they cannot.

Shaman is a little bit tougher because even if we clear everything, we still can die. They have so much damage but their greatest weakness is that they haven't got enough mana to play all their cards usually. Shaman is much more scary than Hunter to give one more turn. When you think about trades, keep in mind their average damage for 1 card is usually higher than hunter. Also it is frustrating that we need to clear everything, but we need to try to play as aggressive as possible before they have winhammer in hand. If you think they will winhammer on turn 5, make sure to load the board as hard as possible so they take hard amount of damage right back. Sometimes, it is even best to hold on to your healing, try to count the damage you will deal next turn and play aggressively for early lethal. Again, I want to remind everyone that killing him is much more Important than survival!! Focus!!

You will lose many times to these aggro decks in the beginning because you may play too safe or waste resource, but it is okay! Try again ^=^

My winrate against priest is not very high because I miss understood this matchup for a long time. Arcane + 2PO + Faceless = 24, 10mana. To kill priest is to kill them on full health. Have damage that is more than 30 and reduced by Emperor. The timing about playing Emperor is the most Important thing vs Priest. Brann + Dark Peddler can be super powerful to dig for more combo piece. Try not to waste a lot of damage on his big minions, but sometime you can't avoid you have to waste it in early game. Even using hellfire to clear small board can be better than using your PO. Priest is like us, we both have so many clear spells but a few minions. Use this advantage! Try use more spell instead of make a strong board for them to clear.

Don't worry about their damage, in fact you can usually kill them with the 24 damage normal combo. Warrior is hard to deal those small minions from us and need weapons early on. Play like a zoo. If he use weapon to clear that's fine he is more close to death. Even he played Justicar early and get a lot of armor, we can still win with tempo.

Very easy match up.......the problem with rouge is he always need to use his face to do board clear. Play like a zoo, you will always kill him before he kills you. Clear minions so he cannot burst you. Be careful of Oil damage. Get a good curve and Emperor turn.

yes, everything was copied pasted from the source link. just sharing this amazing deck with hearthpwn!