As you may already noticed, I'm a big fan of highly synergistic Decks centered around specific themes such as Beasts (Beast Master), Demons (Demonic Void), Deathrattles (Deadly Zoo), etc...
With the inclusion of Anyfin Can Happen and the amazing potential of Murloc Knight, I decided to give a chance to those adorable Murlocs with Paladin. And as always, running a Midrange playstyle, because ... well, that's what I do =P

I almost didn't played this season and decided to have some fun with Murlocs in the late season. I ended up having some amazing streaks from around Rank 7 to Legend, so I finally made it to Legend on EU servers during the last day. 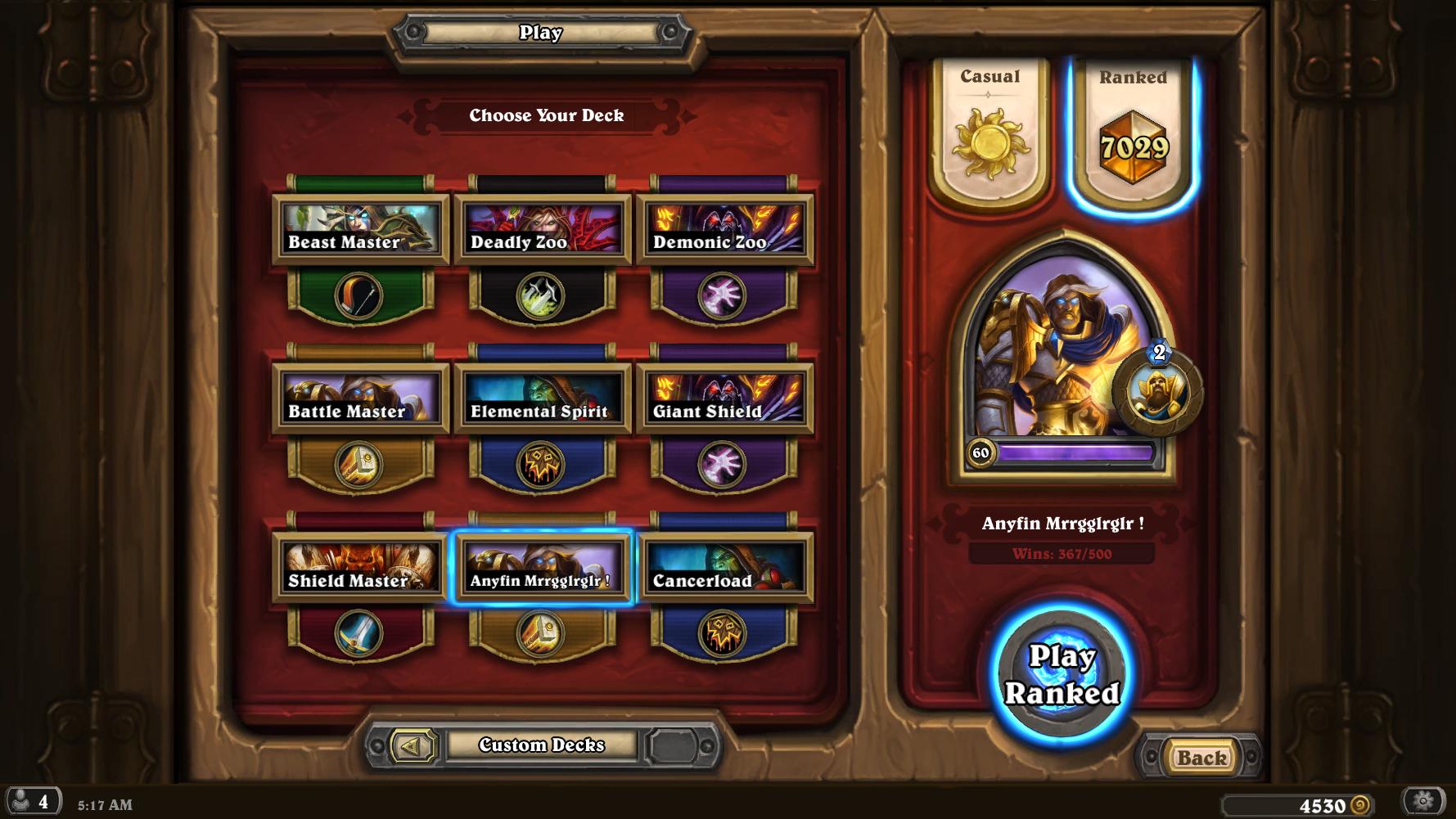 If you like big mighty boards full of Murlocs screaming alltogether, your dream just came true ... because Anyfin Can Happen ! Mrrgglrglr ! 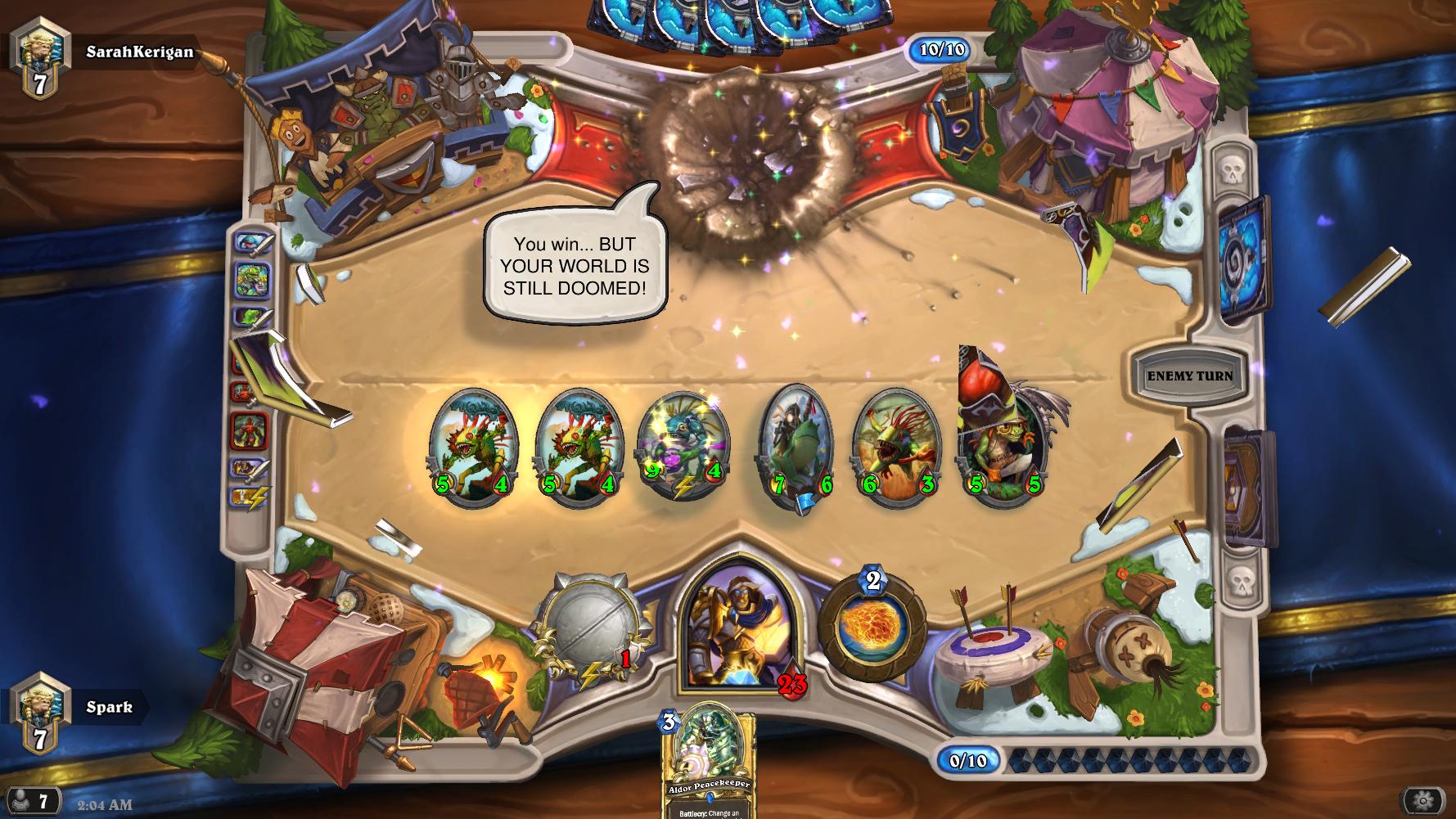 I'm sorry Lord Jaraxxus, but you know ... Anyfin Can Happen ! 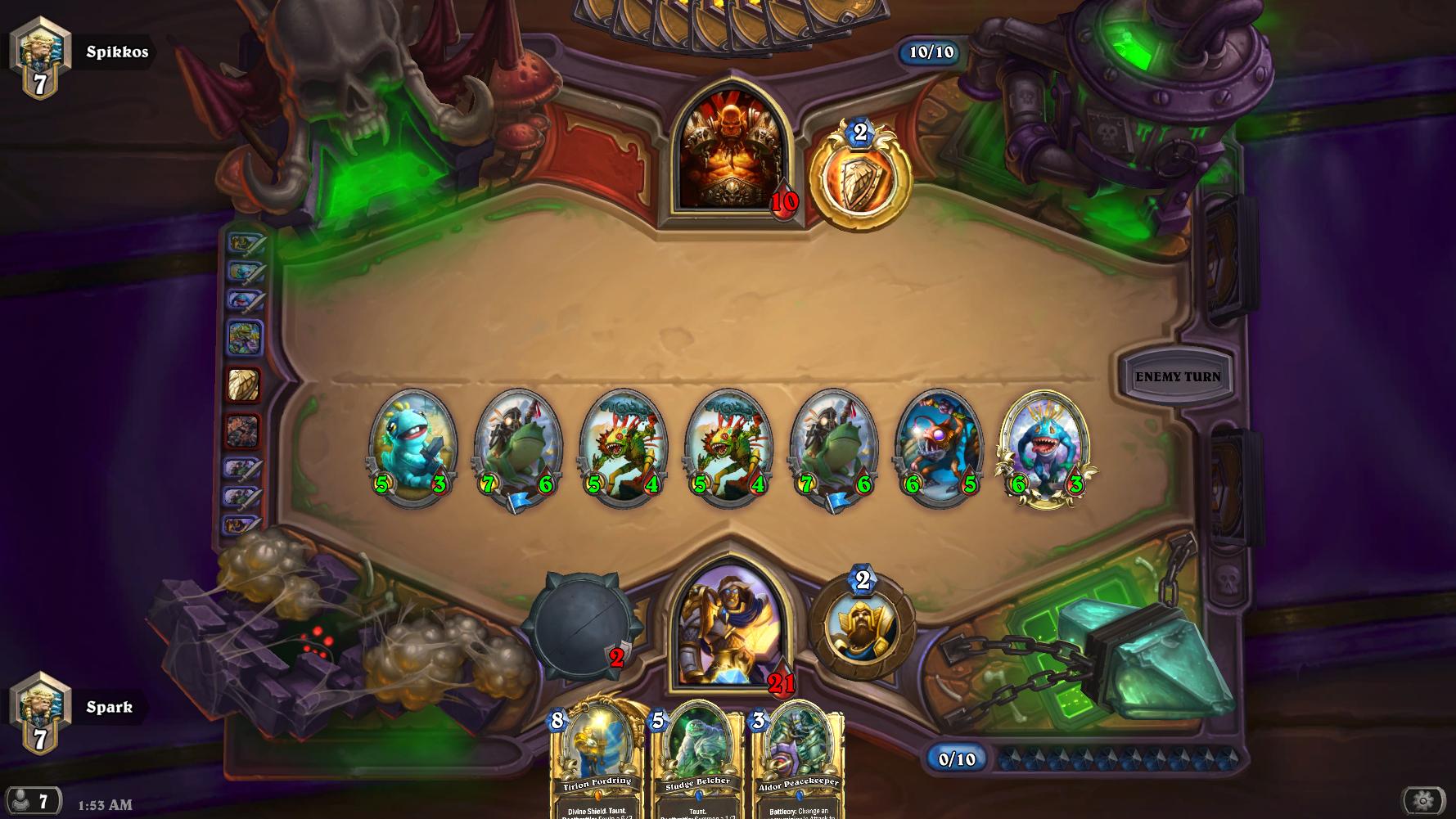 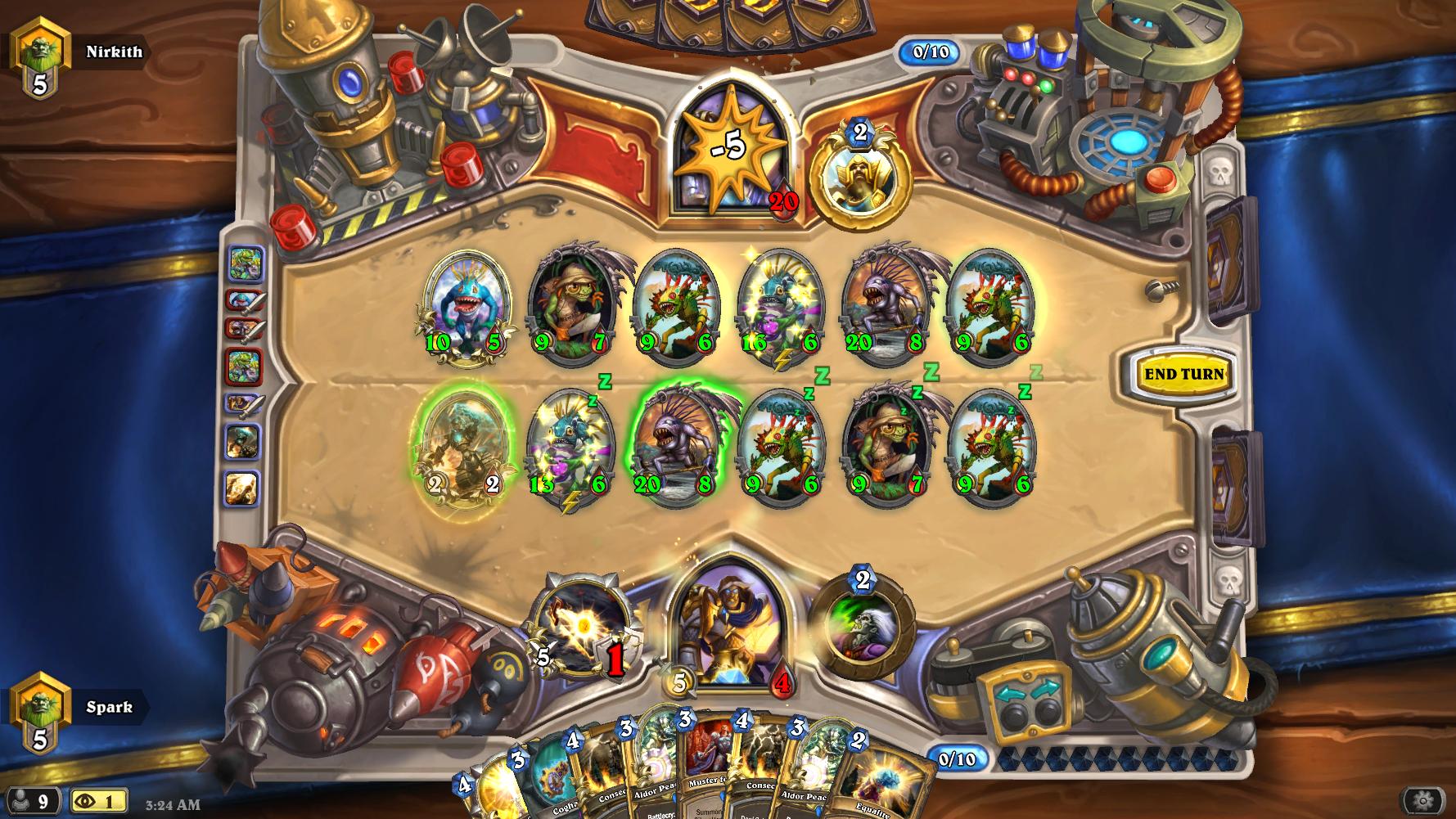 When OTK Murloc Paladin can't quite get lethal and powers up your own combo ... Anyfin Can Happen !

I won't be going into too much details in here, just showing my winrates and share some thoughts about the numbers. Feel free to ask questions and share tips with each other in the comment section (as long as you keep it constructive).

Paladins that I faced were mostly Secret Paladin and as you can see, I generally crushed them pretty easily. I didn't thought the match up would be so favorable but numbers are speaking. That's definitely why I was able to rush Legend so quickly, considering how much this archetype is played on the ladder.
The second most played archetype was Mid Paladin and the result is pretty much the same. Finally I had the chance to face a few OTK Murloc, leading to some insanely fun situations, as you can see in the image above xD

Rogues were all Miracle and this match up seems really unfavorable, they deal with your board too well and if you can't do the same just one turn, it's pretty much over.

Warlocks were generally Renolock, except for some few Zoolock here and there. Those, along with Mid and Aggro Druid, are generally tied match up and standard Midrange tips apply here. If you're not used to the Midrange playstyle, you'll probably struggle against them, so practice before blaming the Deck ;)

The rest was pretty easy to handle with some Face and Mid Hunter, Tempo and a few Freeze Mage, Control Priest, Burst and a few Mid Shaman, and some Control and Face Warrior.

Which hero power should I choose from Sir Finley Mrrgglton ?

I recorded some streaks that I had around Rank 3 to 1. I definitely recommend to check those out if you want to pilot the Deck properly, it covers a good variety of match ups ;)

Sorry about the quality drop in the last video, I messed up with my OBS settings because my computer was heating a bit too much.

First of all, JoRoSaR made a very interesting introductive videos about different archetypes of Murloc Paladin (including mine) which explains very well the differences between them :

The aim is to make use of Anyfin Can Happen amazing potential ! Commiting fully on Murlocs with an Aggro playstyle doesn't feel necessary here and going for an OTK Combo build is kinda underwhelming imo because Paladins has some awesome tools to offer in the Midrange archetype. The reasoning is similar to my Beast Hunter Decks, you play synergies around the theme, and use other class cards to support the build ;)

The set of Murlocs is pretty simple, I chose to run all the efficient ones at different stages of the game. Murloc Tidecaller, Sir Finley Mrrgglton and Bluegill Warrior are good early pressure minions. Murloc Warleader and Old Murk-Eye are here to power up your board afterward. Finally Murloc Knight is just an amazing card that will give you some more steams and sometimes insane Murloc synergies. Remember that it is kind of a turn 6 play (even though I play it on turn 4 if the board is empty from time to time, but it's very rare), so it kind fills the gap the Deck needs.

Even though, those synergies are great to keep on the board, you shouldn't be too scared about losing them, just use them as your minions because you'll summon them back in the late game with Anyfin Can Happen. The card will either refill the board after a board clear from your opponent, or simply finish the game.
Speaking of which, here is the damage potential calculation :

If you're allergic to formulas, don't mind too much about it but think about your damage potential when playing the card. Obviously, it is very important to remember about the Murlocs you threw into the battlefield before using the card, I highly recommend to use something like Hearthstone Deck Tracker. Be careful about random Murlocs you got from Murloc Knight (that's also why I included Grimscale Oracle in the calculation) and remember that ennemy's Murlocs can also spawn from it ;)

As I didn't wanted to make the Deck reliant on this one card, I decided to run a standard Midrange playstyle to support he build. The rest of the Deck is pure Midrange Paladin tools. Thanks to those, you'll often win the game without even needing to scream MRRGGLRGLR ! You can still do it for Swag Points though =P

Shielded Minibot, Knife Juggler and Muster for Battle have proven to be an insane early trinity in the past few months. Coghammer is also very good at snowballing your early game dominance.

Aldor Peacekeeper, Truesilver Champion, Consecration and Sludge Belcher are here to keep up your momentum in the midgame. Equality is used to come back from a crazy opponent's board or set up lethal.

Finally, Dr. Boom, Tirion Fordring and Lay on Hands are your late game steams (along with Anyfin Can Happen). Those cards allow you to either stop the final push from Aggro Decks or gives you the final ressources to finish off Control Decks.

If you are looking for replacements, I'm afraid you'll be disappointed because the Deck just works that way and all those cards are pretty unique and optimal for the Deck. Anticipating the most common question will be Tirion Fordring and Lay on Hands, you can't replace them properly ... Guardian of Kings feels like the closest card that I can think of but it's far from their power level, so you'll still end up playing something sub-optimal. Just go for some late game win condition you have but you are warned.

Oh and if you don't have Anyfin Can Happen, you came to the wrong place, the card is needed and irreplaceable (thanks captain obvious) ... Your only way out is to go for the LOE adventure, which is definitely worth it btw ;)