With the release of LOE, I was particularly interested by 3 cards : Tomb Spider, Unearthed Raptor and Tunnel Trogg. By chance, they all got released this week !

I already updated my Shaman list with the new 1-drop card, you can check it there if you're interested : Elemental Spirit Tempo Shaman
I also posted my Rogue list centered around Unearthed Raptor recently. I definitely recommand to give it a try as it is probably one of the best Deck out there currently : Deadly Zoo Tempo Rogue

Today we'll be taking a look at my updated Midrange Hunter with which I hit Legend this season. Tomb Spider is an awesome addition that allows us to focus even more than before on Beast synergies. The card allows to keep some steam while going through the game and keep Beasts on the board and your hand for all your interactions with them. The discover mechanic is particularly strong here because Hunter specific Beasts are generally pretty awesome. You may find some situational cards that you don't run initially but could help a lot like Timber Wolf, Scavenging Hyena, Stampeding Kodo, Dreadscale or even King Krush. 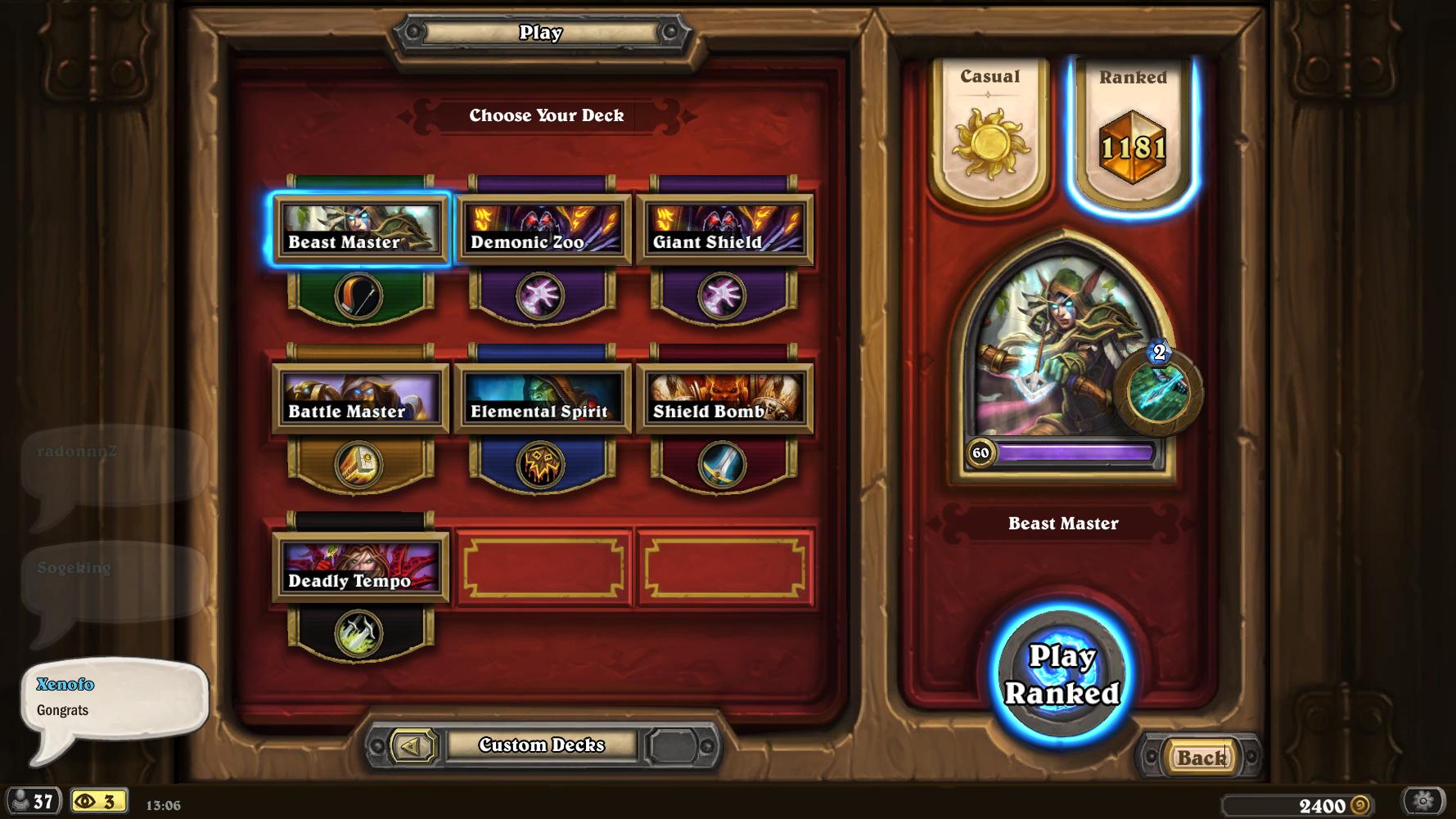 Always mulligan for Webspinner, Mad Scientist and Haunted Creeper as your early plays. Keeping Knife Juggler and Ironbeak Owl is also pretty standard. Animal Companion and Eaglehorn Bow should be kept if you have The Coin or some good early already. Hunter's Mark is not bad to have in your starting hand against Priest.
Always throw out the rest, especially your secrets !

Priest is a tied match up. You'll need to play on curve and snowball into Houndmaster and Savannah Highmane to put your opponent in a reactive state. Be careful about an early Northshire Cleric, Eaglehorn Bow is a must have here.

Oil's Rogue is generally a hard match up due to their early control and late game Sap, but the class is not really played anyway. I didn't faced enough Raptor Rogue yet to evaluate this match up.

The most flexible spot is Tundra Rhino. I often used Stampeding Kodo here because it has many targets in the current meta. Kezan Mystic or Harrison Jones are also pretty efficient tech cards and even Big Game Hunter can be considered ;) You can also try to tech a Cult Master like I did in the past if you want some more draw power but it doesn't really feel necessary anymore due to the free value you got from all your spiders.

With the inclusion of Tomb Spider, Tundra Rhino becomes a very viable tech, you'll often have some Beasts to charge with it and it interacts amazingly well with Savannah Highmane, either for the 6 burst damage or to make use of Hyena right away. That's still a replacable card anyway, even a simple Stranglethorn Tiger or Sludge Belcher could fit the spot nicely.

I also experimented a lot with Ram Wrangler, it is more viable now that you have access to more Beasts thanks to Tomb Spider. The card can lead to amazing situations but it's too much of a gamble to stay in the final list for me. If you want some more fun, it's perfectly fine to run it ;)

Our beloved Piloted Shredder had to let his spot for Tomb Spider. It has a more consistent board presence when it comes into play but as I explained in the Introduction, the discover mechanic and Beast status provided by Tomb Spider is just too good for this Deck to be ignored ;) If you don't have LOE wings yet, you are perfectly fine running Piloted Shredder for this spot.

Flare can be used if you really face a lot of Secret Paladin. But as you can see, I already beat them pretty easily and Flare won't gain you enough tempo against Mysterious Challenger because of its solid body. It could also help in the Mage and Hunter match ups.

Quick Shot is a good tool to have if you find a spot for it in the Deck. King's Elekk isn't convincing enough in my opinion due to the relatively low curve and load of 2 drops already, I would even prefer running Huge Toad over it.

Explosive Trap or Freezing Trap are some easy replacements for Snake Trap. Speaking of which, you shouldn't hesitate to tweak the trap set up according to your meta but always follow the 3 trap rules ;) 2 Freezing Trap can be used against a Midrangy meta while Explosive Trap is great against Aggro Decks. I like my current set up to focus entirely on the Beast synergies.

If you don't have Dr. Boom, why are you even playing Hearthstone ? You should definitely craft it as soon as possible ! Sylvanas Windrunner, Ragnaros the Firelord, Sea Giant, Piloted Sky Golem or any of the card mentionned above can be used while working on it ;)

I recorded my last session to Legend using the Deck. I highly recommend to check it to see how I'm piloting the Deck ;)