I'm back with my second ever deck submission to Hearthpwn. I'm probably best known for my Dragon Warrior post, but with the first expansion wing out and many different Reno Jackson decks, I wanted to contribute my spin on it in warrior. I just hit rank 4 NA legend with it in the mid-season (11/15/15). 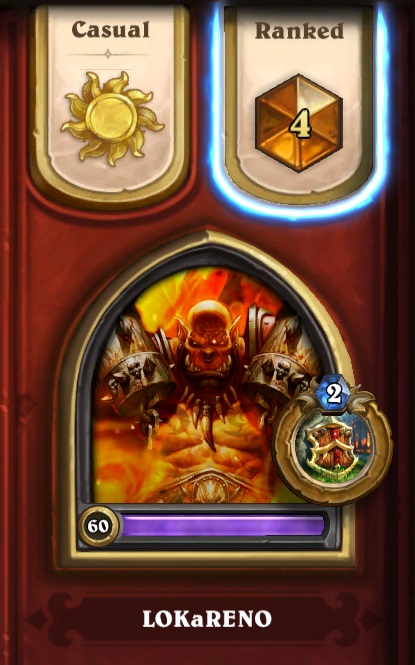 My initial thoughts on Reno Jackson is that it's a really well designed card that promotes deck builders to include underutilized cards and diversifies the card pool. It's a fun answer to many of the aggro decks to be able to drop on turn 6 and fully heal (especially useful vs face hunters and aggro druids). To make it consistent vs aggro to enable a full heal, I've gone the route of making the deck entirely 1 copy of each card. I know there are those that will disagree and argue that Deathsbite is too good to cut or the shield slam/execute, but I've tried to equalize the number of removal options with Bouncing Blades and Crush against the control matchups and Gorehowl to make up for the reduced weapons. I can work on developing another guide if there is demand for that, but I encourage people to check out my stream/youtube for instructional gameplay. Enjoy! =)

Update: This deck just got featured on Trolden!! (starting around 2:40)

A lot of strategy is standard to CW and also discussed in depth in my Dragon Warrior guide, but I will try to go over some of the new meta match-ups here.

Mostly 2 variants at the moment with Peddler Zoo and Reno Handlock. Against Zoo, you will want to mulligan for those early removal like slam, war axe, bash, deathsbite, etc. If you already have prior knowledge that it is Zoo then I don't mind keeping Reno because that heal and 4/6 body will definitely do some work. Use the weapons efficiently and try to save removal for doomguards, Dr. Boom, Malganis and bait into a good value brawl or revenge (sometimes you will rather save armor gain cards until after you've reached <12 health). Deathwing can be dropped generally if they have almost an empty hand or have used up their taunts (2 voidwalkers and 2 argus). Against Handlock, I still prefer the never hit face strategy to not allow moltens and just focus on board control. Mulligan for BGH and exec for those early giants and as usual keep weapons. The focus will be maintaining board control and playing out the late game. Getting Justicar down really helps make warrior beefy and tough to kill. Cycle cards and Ysera are important to keep from getting out-cycled and Harrison is ideally saved for Jaraxxus to help you find that finishing burst. Deathwing is a hard reset to the board but always bait out the BGH first with Dr. Boom, Baron Geddon, or Grom.

The first thing to figure out in a warrior match is if they are Patron or Control. Generally if you see early armorsmith plays, weapon equips, reluctance to armor up, shredder, etc. then they are more likely to be Patron. In my mulligan, I will generally keep brawl as a back up in case it is Patron, weapons, Harrison, and Justicar (for the control matchup). If it is Patron, feel free to use your card cycle liberally, save AoE in mind for patrons, and Harrison that deathsbite. Save removal in mind that most Patron lists run bigger threats now like Dr. Boom, Grom, and possibly Rag. Against Control, hold as much of the card cycle as possible unless you absolutely need to search for an answer (this means using slam to kill 2 health minion, not dropping acolyte, not using shield block, and potentially holding back Harrison). Acolyte is not necessarily a dead card because you can always try to feed it to their Sylvanas. The mirror is really about getting Justicar early and using removal efficiently. You have the same number of removals despite not having 2x shield slam and 2x execute, so you just have to be smart about optimizing the usage of bouncing blades and crush. The matchup is won in fatigue since it is hard to pressure without Alex but their Alex value is negated by your Reno.

Freeze mage is even more easily won now with both Justicar and Reno negating even the effect of their Alex. Just keep removal in mind such that there isn't an unanswered Emperor or Antonidas. Tempo mage is won when they run out of gas. They can have some pretty explosive starts that are tough to deal with though. I mulligan for early removal like weapons, slam, bash and depending on the strength of my starting hand may want to keep the brawl/revenge as a back-up. Save armorsmith/task for the mirror entities and Reno for full healing value. Be mindful of the mana curve of when they will drop Dr. Boom or Antonidas so you are prepared to answer that (this could potentially mean saving brawl for one more turn for example if you can afford to). Eventually they will just run out of steam and succumb to that tank up value from Justicar.

Reno is so good for this matchup, especially if it is Face, that I keep it in my opening hand. Against Face you will want to mulligan for early removal weapons, task, armorsmith, slam (for juggler), bash, revenge, etc. Against Midrange you can afford to mulligan for slower cards like Emperor. Baron is MVP against Midrange since the effect can clear hyenas from highmane and most of their minions. Be smart about when to trigger traps, especially if they are sitting on a bow charge. If there is no reason for you to attack, sometimes it's just about preserving your own health and building it up with Justicar/Reno rather than setting up lethal yourself.

I always keep Reno against druid since the aggro version can often put you down to <10 health by turn 6. This is one of the reasons to only run 1 copy of all cards such that Reno can always be played on turn 6. Against midrange combo, Reno is really great for putting you out of range while not blocking out all of your mana for that turn either! I mulligan for weapons and execute for those early innervate plays and keep revenge in case of aggro since many of their minions are 1 health. The usual suspects such as slam and bash are good keeps too. Getting that Emperor drop on turn 6 is one of the key ways for warrior to catch back up on mana after wild growth starts. Always be mindful of their combo reach! Gorehowl + Reno combo is insane for the mid- to late-game!

Secret paladin is still a tough matchup depending how they curve out. Mulligan for weapons, armorsmith, acolyte, and early removal and try best to save AoE like brawl/revenge for full value (brawling after triggering all secrets or saving revenge for full 3 damage effect). Reno can have a big impact on this matchup as well. You have some more interesting removal options such as having a 3 mana crush when you have a damaged minion for hard removal of Tirion for example. Try to save Harrison for the assbringer if possible but don't be afraid to take the 2-3 card draw from muster if your hand absolutely has no answers! Deathwing can also be a big savior when they go all-in. Midrange/Reno Control has been becoming more popular too, which if you have prior knowledge that it is not secret paladin, you can be greedier with mulligan keeps such as hanging on to Harrison/Emperor. The fatigue game can be won if you can grind out their removal (usually 1x equality, 1x BGH, 2x aldor) before dropping the Deathwing clear. The Justicar hero power can make warrior so durable that paladin doesn't have enough time to finish off before fatiguing out.

Reno has also helped this matchup since it just puts warrior even more out of range of the rogue burst. Mulligan for weapons and bash early on to deal with 3 health minions and key cards like Emperor, Reno, and Justicar. Always play to minimize the effect of sap (Emperor, Dr. Boom, shield maiden, etc. are examples of "unsappable" targets). Many rogues have been playing with assassin's blade so keep that in mind if you have better plays other than Harrison (saving it for that greedy blade is a good idea). Try to keep the board clear at all times to prevent tinker oil value. Loatheb can be used to stall a turn when you don't have a direct answer to their board, and Deathwing can be used as a last resort board clear when they push all-in.

Warrior is favored against both Control Priest and Dragon Priest since it just runs more threats than they can answer. Mulligan for weapons, exec, and brawl and be wise about when to use that removal (keep in mind that Ysera will always be something to answer). Play out the armorsmith and acolyte early to get value before turn 6 cabals. Bait out the mid-game brawl (which will happen since priest really doesn't have burst so they need to build up a sizeable board to pressure the warrior). Justicar just wins the fatigue game and makes warrior impossible to kill for the priest. Always keep the shrinkmeister/cabal combo in mind if you are planning to drop belcher or Ysera and have a back-up removal in case that happens (otherwise don't play it and just tank up pass). Gorehowl also gets a lot of value and helps deal with those 5+ health minions.

Shaman has not been a very strong class lately, but the two main types are mech aggro and midrange. Against aggro you want to mulligan for weapons, armorsmith, slam, bash, etc. to deal with early board and whirling zappos. Hang on to Harrison for the doomhammer if you can afford to since it will be coming. Know that they often will play fel reavers, Dr. Boom, and Ragnaros so be prepared to answer those (for example save hard removal and bait out for a value brawl or revenge such that you have removal for big threats). The mulligan is similar against midrange but you can afford to play greedier such as Emperor on curve rather than shield maiden since they have less burst. Try to use weapons to remove smaller threats and save the removal for fire elementals, Dr. Boom, etc. Using brawl and Baron Geddon can also save some of that valuable hard removal for more efficient targets.

The most commonly asked question is what Deathwing can be replaced with. While the effect is quite unique, you can consider another big threat such as Nefarian, Alex, Rag, etc.

For those of you who have doubts on Deathwing's uses, please check out my DEATHWING Youtube playlist:

The brief guide is by no means comprehensive, and I think the best way to learn the deck is to learn by experience and from watching the stream/past broadcasts. I post highlights to my youtube channel as well! Enjoy and may the ladder be ever in your favor! =)

The reasoning behind these changes are to improve some early game presence vs aggro with Deathlord and Brann while also improving the fatigue game vs midrange/control decks with less card cycle/dead cards and the Brann/Iron Juggernaut combo wombo. Sylvanas is slow vs aggro and often a liability in the mirror match where it can steal an acolyte.