i played this deck on this season and last season to legend in a pretty short amount of time ! It is a aggro deck which i worked on for a while - did some changes to some other hybrid decks to counter the current meta pretty good in my opinion - so i thought why not share it ;-)

why Bear Trap ? lots of palas out there so i thouhgt more value on high ranks with Bear Trap and everybody expects Freezing Trap in that deck ! 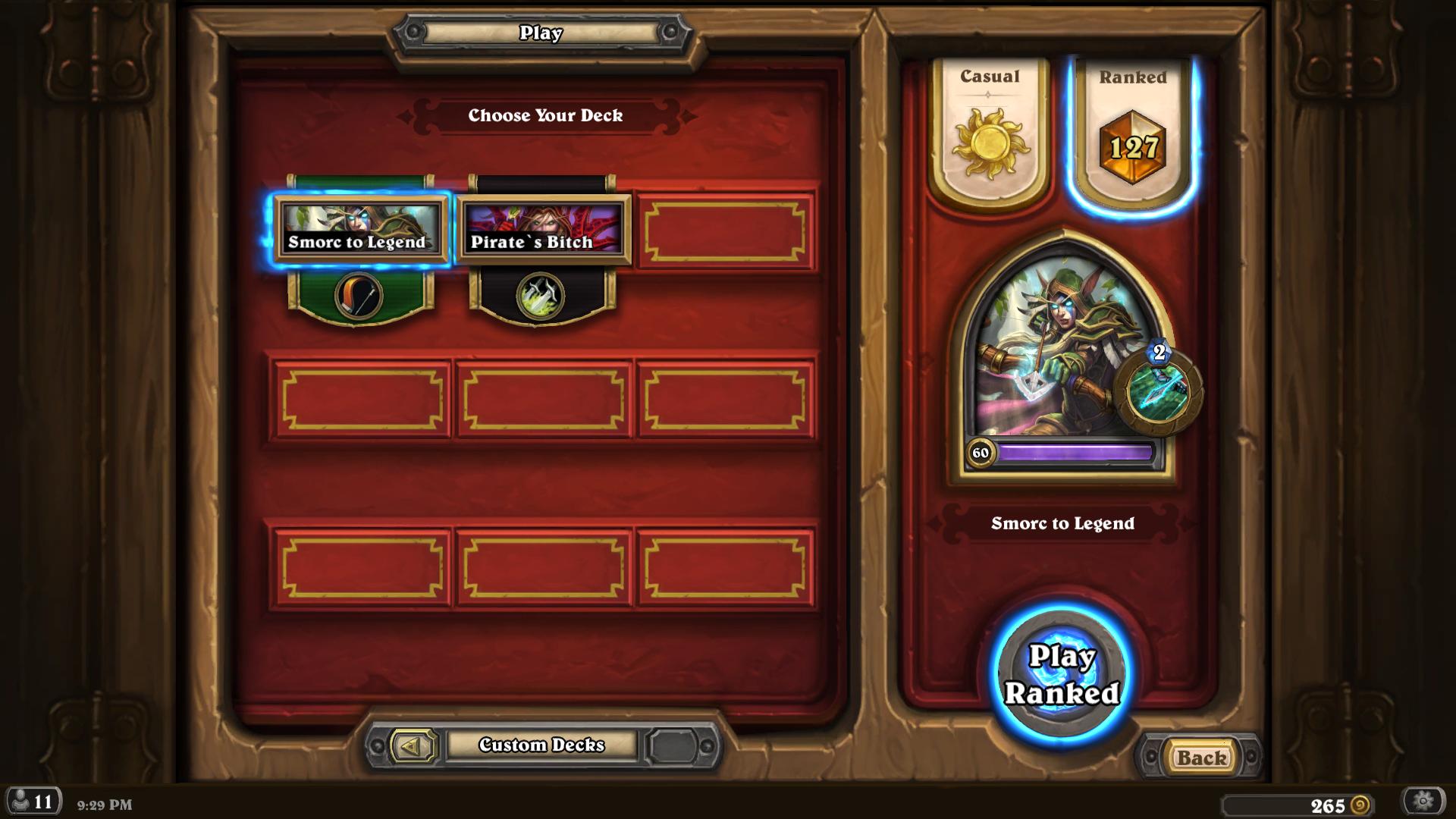 My Stats from rank 5 to legend !

This is a pretty fast deck and in nearly every match up you should be the aggressor: But this deck has more endgame value than some other aggro decks out there so early game trades are important. Try to clear of opponents minions with a weapon or maybe with Mad Scientist to get a secret. The goal is to finish with 0 Cards in your hand and maximize your heropower. Most of the time you should go for a mana efficient play to bring the max. damage on board. But the most important thing is to realize when you should go into facemode- so count how many damage you can do in the next 2 turns and with which combination of your cards you do most. Always do the math it will win you the close games.

Without Coin: Search for a one drop. But always keep Mad Scientist it`s your best starter most of the time. Haunted Creeper and Leper Gnome and Abusive Sergeant are other cards you looking for.

With Coin. Get that Mad Scientist if possible but dont be to greedy a good curve is important there so any 2 drop 2 drop 3 drop is a keeping play.

Surprise! The faster hunter will win. So force the other hunter to trade. If you start you should mulligan for a 1 drop and Mad Scientist is the MVP here again in the mirror. But you have 2 Ironbeak Owl which will help you a lot in the mirror. If you are able to pick up Loatheb then you have to get the timing right to shut the other hunter down. But all over all it will be a race.

So there are not many out there but if you face one it is a good matchup. Rogue doesn’t play taunt in general so maximize the board, trade with you weapons and you should be fine against any version of Rogue

Again good matchup. Against zoo you should try to defend board or gain board control because you are the faster deck here. Silence Voidcaller! Mad Scientist, Haunted Creeper, your one drops and weapons will win board for you most of the times. If you face handlock you have to be fast. Dont bring him down to 10 HP if you can’t finish him off next turn. Keep Kill Command and Quick Shot for the finish because of his taunts. If its deamonlock you have to clear his minions because of Shadowflame

Here it is getting difficult. Most Mage decks out there are aggro. Tempo or mech so you have to win the board or its over. Flamewakeris the worst, a minion you have to kill instantly or at least silence it. A good start here is everything. Mulligan for 2 HP minions because of his Heropower. Against Freeze Mage just remember to use your 2 Ironbeak Owl wisely on Doomsayer and on his Mad Scientist. 60 40 for you to win !

Good Curve is everything here. But because of combo druids you play 2 Ironbeak Owl to get the damage through. Mulligan just on curve and kill the Darnassus Aspirant in his early game. Do not overcommit you board after turn 3 because of Swipe. Recently you face the aggro druid which shows up with Fel Reaver. Against him it is a race so trading is here more important than against the combo druid.

Not much to say here. There a not really much shamans out there but when you face one you should be in good position here. Just get the board and kill of his totems because of Bloodlust. Especially with Knife Juggler and Unleash the Hounds you should find an easy win here.

Bring more Palas ;-) so this is a match up you will face a lot currently and you will be ahead here. There a various forms of secret paladin out there. Unleash the Hounds and Argent Horserider will help you to play around Noble Sacrifice. You should start racing early here get value on the board as fast as possible. Mad Scientist will help even more here because he will win you the board back in most of cases. Ironbeak Owl on early Secretkeeper or even Shielded Minibot. Early game is important. force him to trade

A difficult match up. Being fast is important here because of Justicar Trueheart and all his armor. The control warrior will outvalue you easily so you have to kill him until turn 8. Warrior has so much removal that’s why Weapons are strong in this match up. Let the warrior do the trading but Armorsmith is a must kill.

The worst match up you can face. Play around Holy Nova on turn 5 and kill of his Northshire Cleric if possible or silence it. Abusive Sergeant in a combo with your board allows you to kill of his early taunts so it’s a keep. Trading is absolutely necessary in the early game so he can’t buff his minions.

so i didnt expect such a great feedback! Many said they became Legend for the first time with my deck.

so if you like my deck feal free to drop me a upvote ;-) tx Hope you have fun playing it too