This Deck has been updated with the release of League of Explorers : Beast Master

It's been awhile since I posted anything there so I decided to do a little series sharing my current Decks (up to date with TGT) with minimal but informative guides.

Here are the Decks that I'm currently using and hit Legend with :

Those are generally pretty standard lists, although there is still my little mark on it, and are all Legend viable. I'm pretty sure you can find something fitting your playstyle and taste ;) 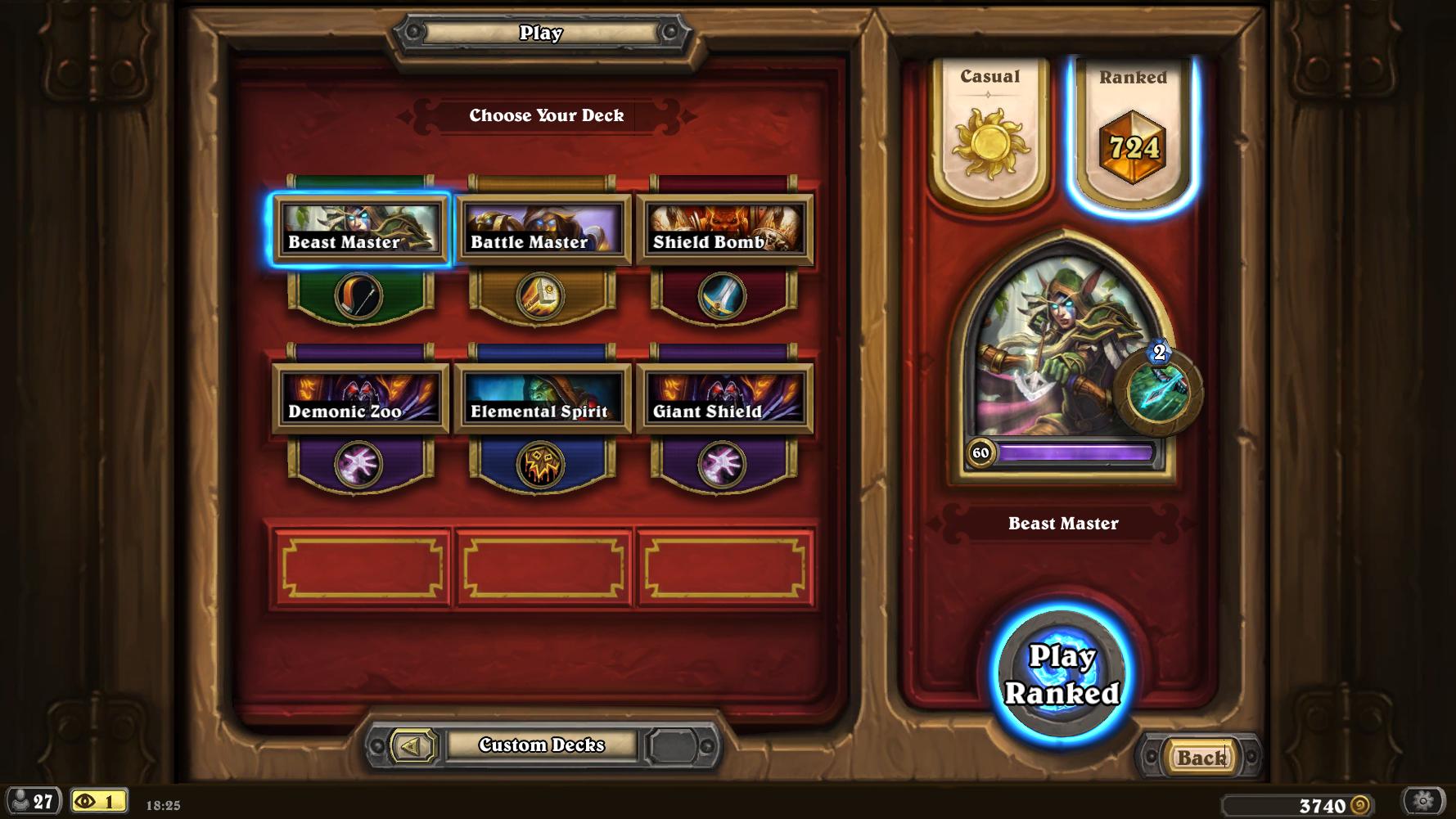 Always mulligan for Webspinner, Mad Scientist and Haunted Creeper as your early plays. Keeping Knife Juggler and Ironbeak Owl is also pretty standard. Animal Companion and Eaglehorn Bow should be kept if you have The Coin or some good early already. Piloted Shredder can be kept against slower Decks like Control Warrior and Hunter's Mark is not bad to have in your starting hand against Priest.
Always throw out the rest, especially your secrets !

Priest is a tied match up. You'll need to play on curve and snowball into Piloted Shredder and Savannah Highmane to put your opponent in a reactive state. Be careful about an early Northshire Cleric, Eaglehorn Bow is a must have here.

Rogue is generally a hard match up due to their early control and late game Sap, but the class is not really played anyway.

The most flexible spot is Stampeding Kodo. I often used Kezan Mystic or Harrison Jones here, those are really great Tech Cards depending on your meta.
I'm currently using it because every Deck has targets for it and it's a good Houndmaster target. Keeper of the Grove, Shade of Naxxramas, Flamewaker, Doomsayer, Armorsmith, Acolyte of Pain, Shielded Minibot or some weak Aggro minions are all great target to keep your tempo up !

Ram Wrangler is not that bad but more of a fun card. I tried it a lot and it can lead to very funny situations but is generally not reliable enough. If you really want to play it, You should cut a Houndmaster.

Stranglethorn Tiger is a simple card that I also used a lot in that spot, it's a solid beast that won't be removed right away.

Flare can be used if you really face a lot of Secret Paladin. It will also help in the Mage and Hunter match ups.

Quick Shot is a good tool to have if you find a spot for it in the Deck. King's Elekk isn't convincing enough in my opinion due to the relatively low curve and load of 2 drops already.

Explosive Trap is an easy replacement for Snake Trap. You shouldn't hesitate to tweak the trap set up according to your meta but always follow the 3 trap rules ;) 2 Freezing Trap can be used against a Midrangy meta while Explosive Trap is great against Aggro Decks.

If you don't have Dr. Boom, you should definitely craft it as soon as possible. Sylvanas Windrunner, Ragnaros the Firelord, Sea Giant, Piloted Sky Golem or one of the card mentionned above can be used while working on it.