Hi, my name is KRUPS.  I am a 9x Legend player that really enjoys playing aggro and tempo decks.

In the past I have designed decks around the theme of them being low in Dust cost so I figured that I would make another attempt at reaching legend with a budget deck during the September 2015 Season.  This time around I chose to do Face Hunter because the deck doesn't really require any legendary minions and also doesn't require any epics.  I came in at the Legend rank at around 2300 towards the end of the month and played this deck to 143 Legend in a few hours. 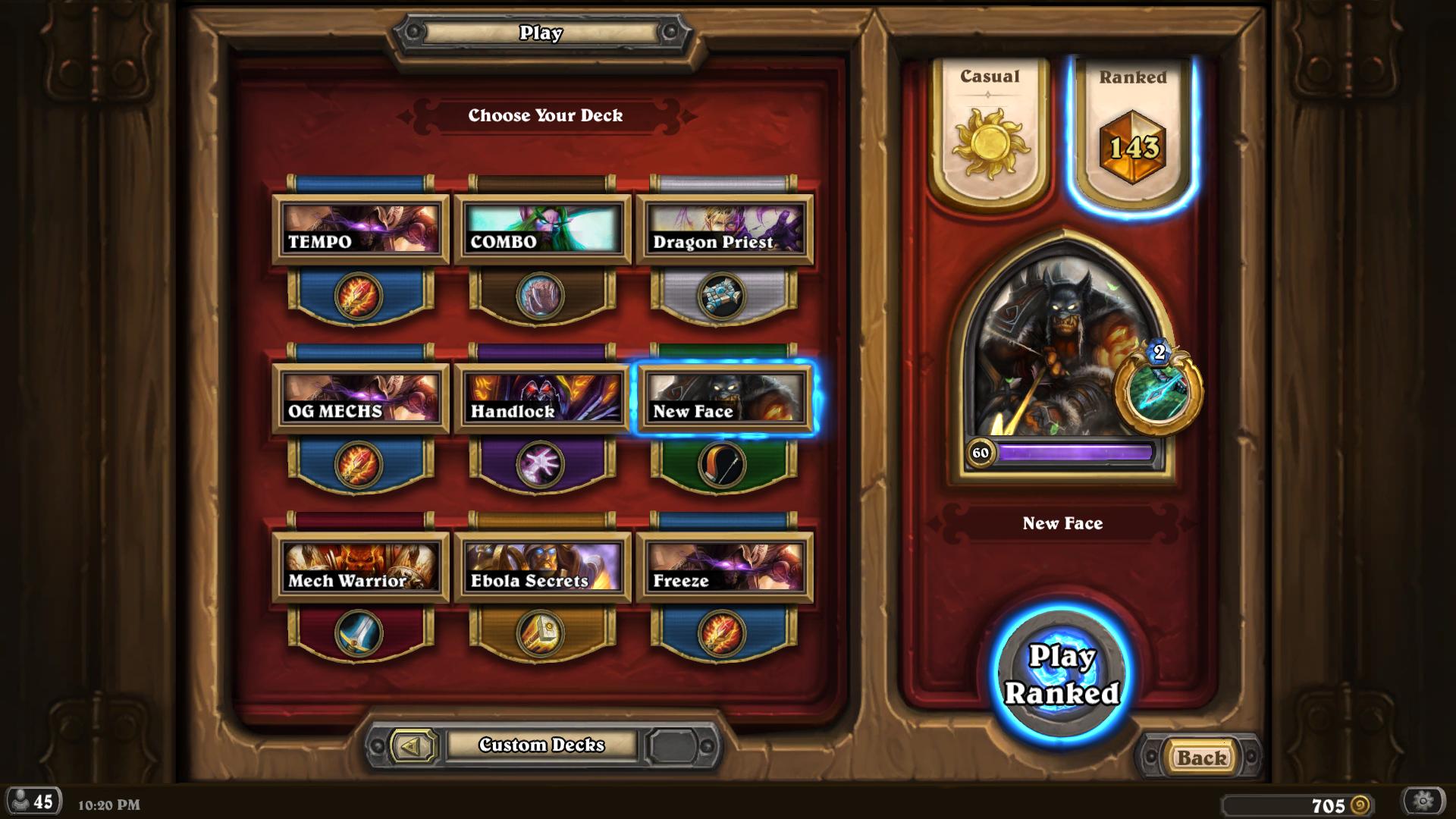 Statistics were collected over 48 games from Rank 2300 Legend to Rank 143 Legend.

While on the surface this deck may seem like your typical Face Hunter deck there is one thing about it that makes it pretty unique.  This being that instead of just running your typical 2x Explosive Trap it instead runs three different traps.  The fact that it runs three different traps makes the deck much more consistent in my opinion because your Mad Scientist will very rarely fizzle (It can only happen in this deck when all three traps have been drawn, which is unlikely), it greatly strengthens your Eaglehorn Bow, and you also are never at the risk of drawing duplicate traps.

Also, a lot of Face Hunter decks run Leeroy Jenkins and Snake Trap, but since we are focusing on reducing the total dust amount of this deck I have opted to play other cards.  That and while these these two cards might be nice to have they are simply not needed.

FACE HUNTER DIDN'T GAIN MUCH FROM TGT, IS IT REALLY STILL THAT GOOD?  WHAT ARE THE MATCHUPS LIKE?:

Yes, it is still really that good.  I have found myself consistently beating Secret Paladins with this deck, it is also fast enough to race Patron Warrior and these two decks are the most popular on ladder at the moment.  Also, Unleash the Hounds is pretty insane against Patron Warrior.  Control Warrior and Dragon Priest can be pretty tough match-ups, but if you draw well and play tight they are certainly winnable.  There is very little Zoo on ladder at the moment (Keep in mind this is all from a NA perspective), but Handlock is still around.  Against Handlock I have given up on holding back damage to prevent them from playing their Molten Giant on the cheap, and instead just going for the kill as early as possible.  When I played Magic: the Gathering professionally there was a saying amongst my teammates, and that saying was "make them have it"...in other words, MAKE THEM HAVE THEM THE GIANT, AND IF THEY DON'T, PUNISH THEM FOR IT.  I don't know about you but I'm not gonna sit around and wait for my opponent to draw into their Hellfire and Antique Healbot.   A lot of players of disagree with me on this, but in my opinion Face Hunter does not have the luxury to just sit back and chill, you have to maximize your damage per mana every single turn.  When you are up against Midrange Hunters you should be able to race them and just "go under" them.  Cards like Savannah Highmane are pretty useless against you, the only time I found myself losing to Midrange Hunter is when I would randomly get blown out by Ram Wrangler or my opponent got crazy Knife Juggler RnG.


Argent Horseman vs. Wolfrider:  While Wolfrider may have one more point of attack the divine shield that Argent Horseman offers is in most cases much more valuable.  I have also found myself keeping Argent Horseman in my opening hand if I have a one drop and a two drop as well, where as if I had Wolfrider I always felt inclined to mulligan it.  You can almost always "trade-up" with Horseman because of the divine shield and it works swimmingly with Abusive Sargent.  Being able to answer an opposing Knife Juggler or something else of the like with a horseman is very powerful on turn three.

The singleton Worgen Infiltrator and Haunted Creeper:  I am only running one of each of these cards simply because we have to make room in the deck to make sure that we can accommodate two copies of Quick Shot and the third trap.  A lot of Face Hunter decks only run two traps, and one quick shot.  I think that two copies of quickshot are pretty imperative for an aggressive Hunter build because it can steal games against control decks when the games go long.

Brave Archer:  A lot of people on my stream have asked me why I am not playing this card and it is simply because I don't think that it is good (and I believe that most players competitive players would agree with me).  This card is basically a three mana Leper Gnome.

HOW TO MULLIGAN:  If I don't have the coin then the only two-cost minion that I keep in my opening hand is Mad Scientist.  This is simply because he is the most powerful two-cost minion in the deck (and arguably in the entire game).  You really want to mulligan for one-cost minions with this deck if you don't have the coin.  You have a lot more liberty with what you can keep if you have the coin with this deck.  However, I do not like keeping any spells in my opening hand, and I never keep Arcane Golem.   Arcane Golem is never a turn three play unless it absoutely has to be to answer a threat or to stay on curve, you generally want to hold it back to weaken it's drawback as much as you can.  Knowing when you can and can't play Abusive Sergeant on turn one is pretty much dictated by whether or not you are playing against Control Warrior or Dragon Priest.  If you are playing against either of these decks you really need to leverage his ability to be able to trade with Armorsmith and Wyrmrest Agent.   Otherwise I would say that it is generally safe to play an abusive on turn one if you have no other play.  Keeping an Argent Horseman is totally fine if you solid turn one and turn two plays.  The same goes for Animal Companion.  You always keep Ironbeak Owl against Druid no matter what, and keep Owl is fine against other decks as long as you have other decent early plays.  You also want to keep Owl against Dragon Priest no matter what.

KNOWING WHEN AND WHEN NOT TO PLAY Knife Juggler:

Knife Juggler can be a tricky card to play.  If you can hold back your Juggler to wait to play it with Unleash the Hounds on the same turn then you probably should, this is more true against aggro decks than anything else.  If you have to make the decision to play Mad Scientist or Juggler on Turn one or two turn then it is usually the correct play to play the Mad Scientist.  This is because you want to be able to leverage Juggler's ability by playing it later in the game, and being able to follow it up with other minions, or playing it and then breaking a Haunted Creeper and hopefully resulting in some sick juggles.

If you have any questions about the deck then just let me know via Twitter or just check out my stream on twitch.   Hopefully this guide has been helpful for you in one way or another!