Hey guys in the following you will see my guide on a version of Mid/Control Pally, as always I don't take any credit on the deckbuilding itself as this is a common deck I just offer my guide a stream and thoughts on it ! I'll pay attention to the comment section, even though the faster way to ask your question is to check my stream. 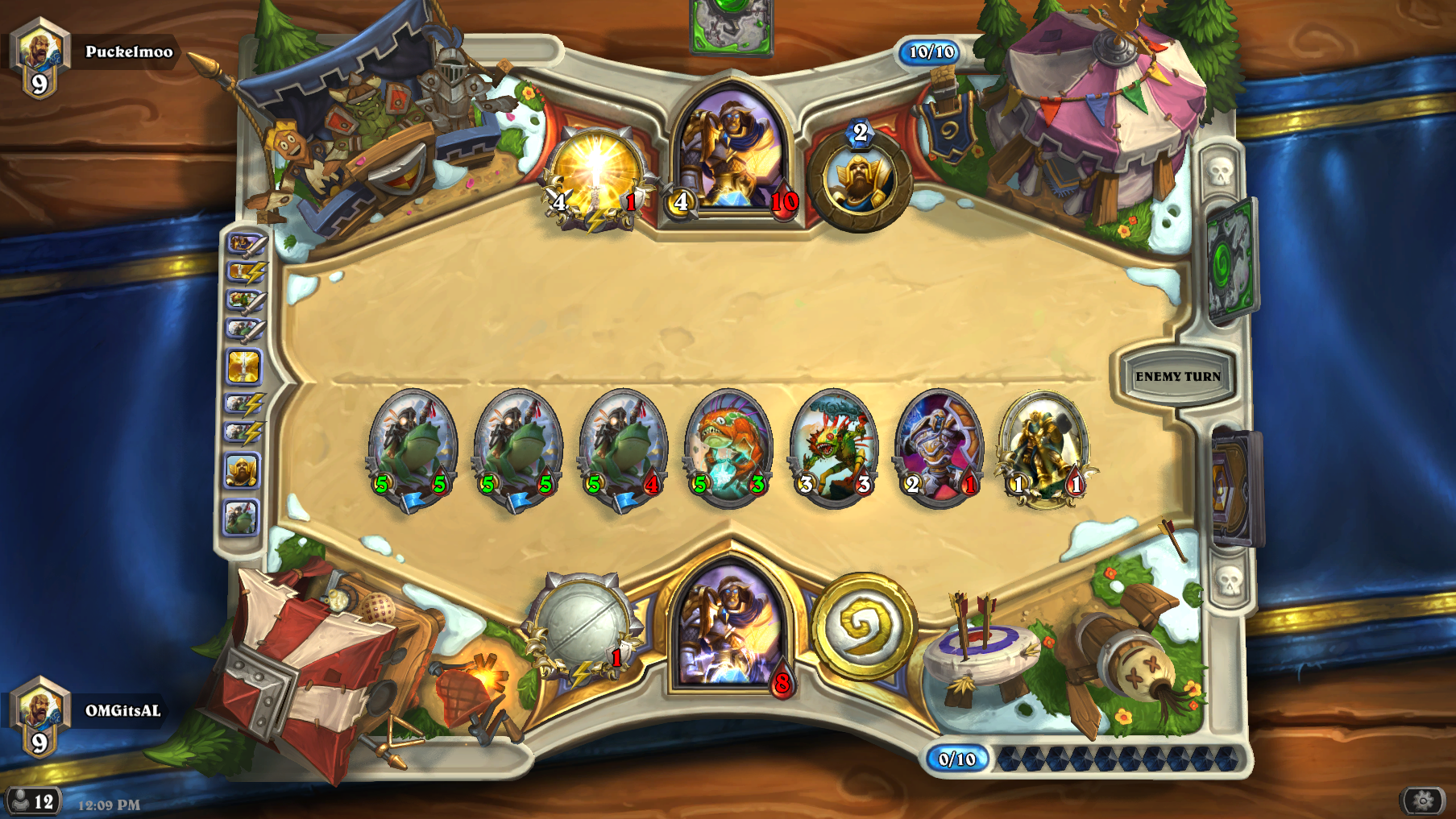 First of all, you do focus on board control and you usually won't go face until turn 10 or later depending on the enemy's board state. In case you have issues deciding when to clear and when not to clear then just clear until you have lethal you shouldnt have too many problems dealing with common ladder decks except for Freeze Mage maybe. If you are a more advanced player you can feel free to push for dmg and force your opponent into unfavorable trades when your health, board state, and 'taunt situation' allows it.

1. Mulligan for any low drop and gain early board state
2. health is not an issue for you so feel free to jump in face first and drop low on health (except for hunters) while stabilising your board (be careful about wastingConsecrations)
3. once you control the board aim for lethal and force your opponent into unfavorable trades into your taunts

Mulligans are easy you really only care about getting anything below 4-Mana, and even if you don't get lucky you are usually fine

I'll just leave you with the winratio screenshot from above, because it speaks for itself you are a control based midrange deck so ofcourse you will suffer from aggro/face decks and im not gonna lie patrons are a pain in the ass as well unless you rly know how to control your Equality + Consecration combo. As you see i barely faced any shamans but in further games i did fine against them its somewhere between 50-70% aswell (btw secret Pallys are getting rekt(ed) hard).

First of all i want to mention you can't replace a card in the purpose it serves, every card is unique in its purpose in the deck. In fact you can adjust your deck in order to improve it against the meta you face or due to financial reasons (Dust).

Concidering this is a common decklist I'll only speak about "controversal" cards and expensive cards which are often asked to replace.

Coghammer - imo one of the most enjoyable cards in the game it's really well designed and serves unique purposes a must include in any Pally deck for me
replace it with any 2-4 drop of your choice i suggest: Sen'jin Shieldmasta if u feel you need the body with taunt or Argent Lance if u feel like having more weapons

Quartermaster - i started using just 1 due to financial reasons and i stick with it he gives you a omnipresent threat throughout the entire game and can win you games by turn 4. Still i think using 2 is overkill you just rely too heavily on a good Muster for Battle or you need to wait too long to actually get value out of it
replace it with any 4-6 drop that gives you a certain board pressure as well as tempo to contest control decks, i suggest: Sen'jin Shieldmasta Harrison JonesLoatheb Sunwalker Azure Drake or Mukla's Champion if you like experimenting

Lay on Hands your only actual card draw its an absolute must have otherwise you need to reconstruct the deck with a variation of Azure Drake Guardian of Kings Tuskarr Jouster and similar designed cards.

there shouldn't be any controversial cards in the common section.

as I mentioned above if you are looking for quick answers check my stream (http://www.twitch.tv/simply_al)

Note: I'm just done with the main exams for now and I'll be in holiday from the 12th to 25th of October I'll still try to answer comments ASAP.