Hello guys, im Tincho from Dynamic Esports and im Argentinian HS legend player, i hit 10x legend and my best rank was 2#, browsing to get the dream. I hit legend between 8-15 days every season, and this season i did a mech warrior, this deck have the tech cards of every mech deck, and another cards that have a lot of burst  as Mortal Strike, Heroic Strike, Kor'kron Elite and Arcanite Reaper. And weapons to get the control board on early like as Fiery War Axe and Death's Bite. 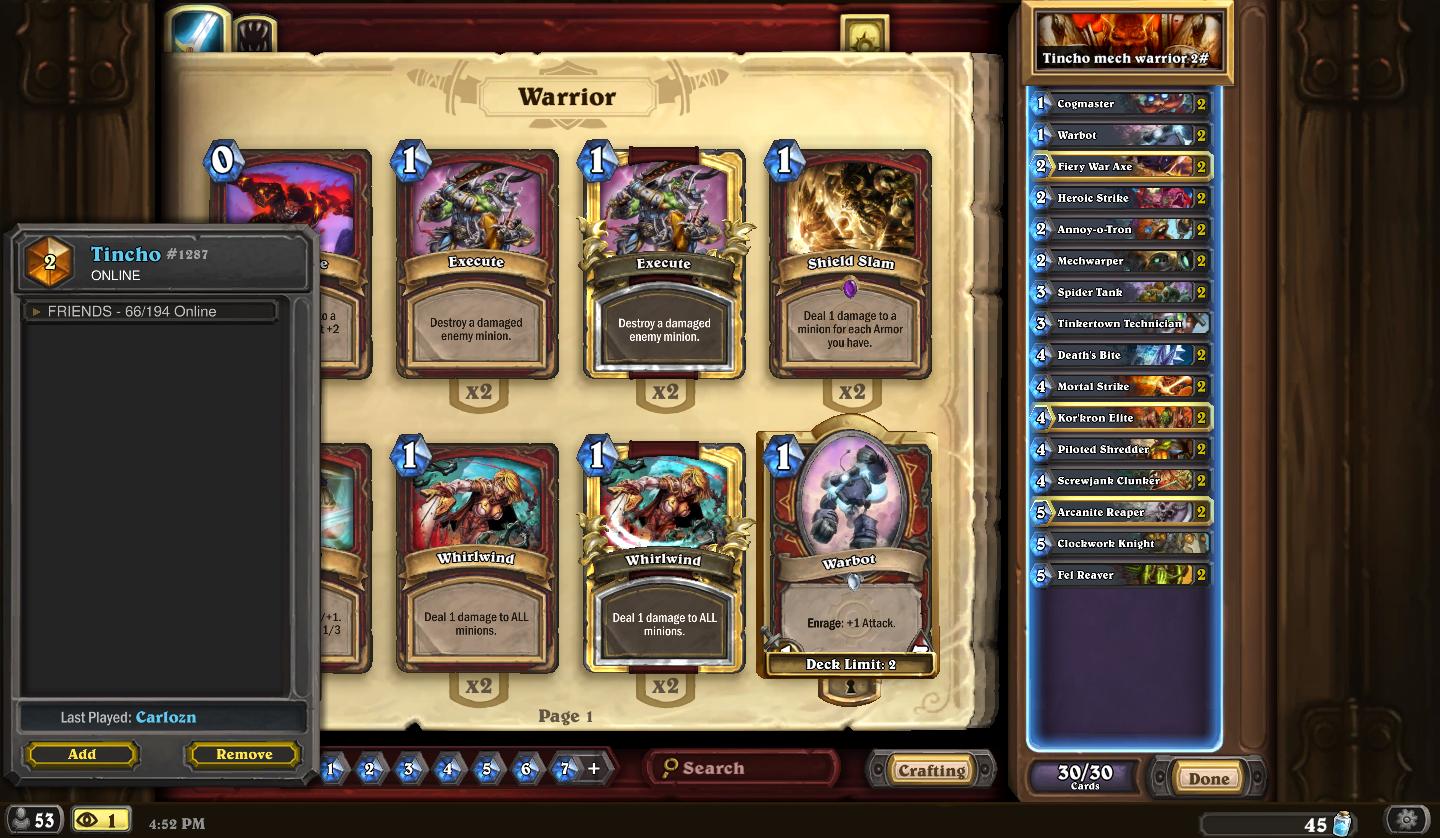 Against aggro/ midrange: Fiery War Axe to trade with early minions and Tinkertown if we also have 1 mech 3 mana or less.

Against control: We want an aggresive start, so 3 mana or less minions is that what we want. So we want Spider Tank and Tinkertown.

We want a good early start, and get the control board with Fiery War Axe and do good trades in early. Then in midgame, we should to start to going to the face, to finish the game the most fast possible. So, the plan is get a good board, and then go to face with all our burst damage.

Cogmaster: The 1 mana minion card thats tech in every mech deck. This card have an incredible potential to do 3 damage in the early game.

Warbot: This card dont have a good potential, but this can trade with another tokens of paladin and be a 2/2, but the most important is that works amazing with the rest of the deck, work with Cogmaster give him +2 attack, with Tinkertown to active him Battlecry, with Screwjank Clunker to get +2/+2 and with Clockwork Knight to get +1/+1.

Fiery War Axe: This card always keep in hand against aggro, because give you the control board on early turns, so this is a tech card of every warrior deck.

Heroic Strike: I use this always to get an easy lethal, or in some options to trade another minion with taunt. And 2 mana and deal 4 damage its so good.

Annoy-o-Tron: This card its amazing, because protect your other mech so easy, and in late game can give you the game if he protect the Fel Reaver.

Mechwarper: This card can give you the potencial to play a lot of minion in the early, so we always keep this on mulligan.

Spider Tank: A good 3 mana minion. This can do a lot of good trades for you on early game.

Tinkertown Technician: This is a really good 3 drop for a mech deck, because can be a 4/4 and give you a Spare Part that can work so good with the rest of deck, like the stealth to Fel Reaver.

Death's Bite: This is another weapon to get the control board in midgame, or just deal 8 damage in 2 turns.

Mortal Strike: This card is another win condition we have in the deck, like a Fireball if we have 12 or less health, that works so good against aggro decks.

Kor'kron Elite: One of my favourite cards, i love this card because is like a Huffer secure, and have +1 health, but cost +1 mana. This a lot of times survives 1 turn, and thats value.

Piloted Shredder: In my opinion, the best of the mech's minion. The oponnents dont want to kill it if he cant kill the other minion of deathrattle, so is so much probably to survive 1 turn almost and give you a lot of tempo.

Screwjank Clunker: This is like a 4/7 for 4 mana, but the best of this its you can give that +2/+2 to a Mechwarper to survive easy or to an Annoy-o-Tron and get a 3/4 with divine shield.

Arcanite Reaper: One of our win condition, we use it con midgame/lategame to just go to the face (like SMOrc) and deal 10 damage in just 2 turn.

Clockwork Knight: This is like a 6/6 for 5 mana, this is so similar to Screwjank Clunker, but this gives +1/+1 to another mech.

Fel Reaver: My favourite card of the deck, basically this is our principal win condition, deal 8 damage every turn its amazing, i just love this minion.

Thanks to P4wnyhof to do this gameplay, here he plays in legend and explain the mulligan and plays. You can see another decks in his profile.

Thanks to Khristophesaurus to do this gameplay, hes a great person and helped me with the guide, so many thanks to you man! You can see another gameplays from him in his channel of YouTube Khristophesaurus Dinosaurus.