This is the list used by Irronman(aka coreyrj) to reach the 34th place on the NA ladder. It's surprisingly effective and is tons of fun. 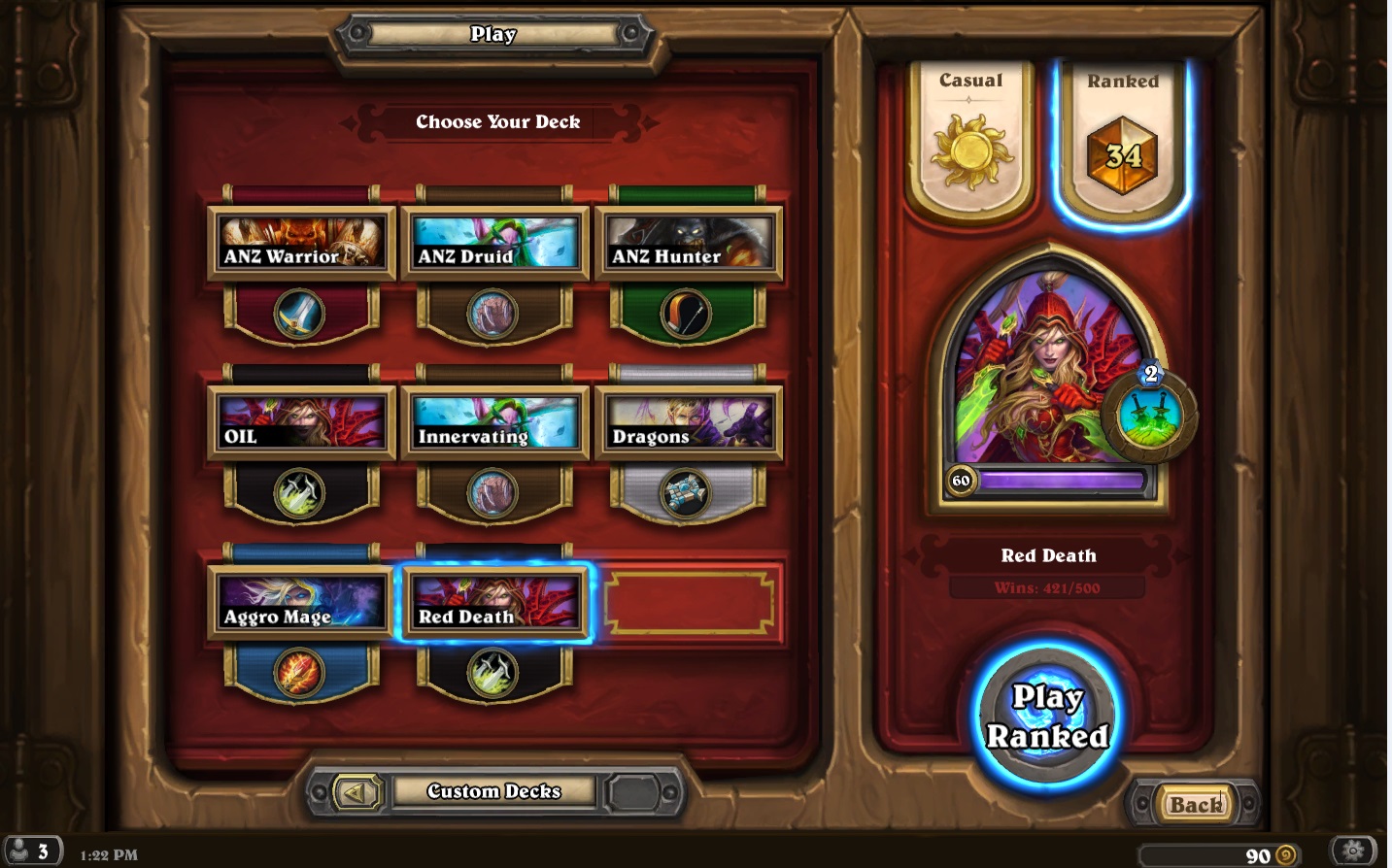 Like most Rogue decks, this is a tempo deck at its core. Aim for board control and finish your opponent with devastating burst. Generally speaking, if I'm against a slower, control deck like warrior, freeze mage or handlock i'll definitely take an aggressive line and be greedy with my resources. Against faster decks like hunter or secret paladin though your primary goal is just to maintain board control.

Your game plan in this match up is the same as a conventional oil rogue list, your primary win condition is board control. Having a superior board position through turns 3-6 will often net you a win in this match up. Mulligans: SI:Agent - Backstab - Deadly Poison - Bloodsail Raider - Ships Cannon - Buccaneer.

Your game plan here differs from a standard build, you want to be more proactive and take a very aggressive stance in the mid game instead of waiting to clear patrons reactively with flurry. Most of your early game plays in this match up can be dealt with very easily by the Warrior class so you want to play your game, and your mulligan slowly, setting up for large weapon or multiple minion turns on turns 4-7. A large assassins blade is often your beast win condition in this match up. Mulligans: Assassins Blade - Sprint - Deadly Poison - Preparation (If already holding Sprint) - Azure Drake - SI: Agent.

Your game plan and mulligans are relatively identical to the patron match up. If you identify it as control warrior make an effort to more greedy with weapon resources (E.g. waiting on assassins blade charges till you get a weapon buff). Mulligans: Same as Patron.

Here is where your list will struggle more than the standard Oil Rogue because of no Fan of Knives. Your primary win condition in this, and in any aggro match up, is board control. Mulligans: SI: Agent - Backstab - Deadly Poison - Ships Cannon - Buccaneer - Blade Flurry - Bloodsail Raider - Dread Corsair (If already holding Deadly Poison).

VS Tempo Mage, Mech Mage and Zoo Refer to Secret Paladin match up. Though your Mage match ups struggle less due to the lack of fan of knives.

You can think of this match up as a mixture between a Druid and a Control warrior in terms of game plan and mulligans. In the early game, like vs Druid, you want to play very aggressively for the board and try to deny Northshire Cleric and Velens Chosen value. In the mid to late game you want to leverage your board advantage and play Assassins blade and start burning the priest or play Sprint and get a large card advantage. Leveraging an early game board state into mid/late game draw and reach is the primary way to win this match up.

I initially thought this list would struggle in this match up more than your standard oil list but have been pleasantly surprised with how its performing when played very aggressively. Your primary win condition in this match up is to leverage a favorable turn 4-6 board state (that has ~3 minions) with enough burn to kill the warlock from 14-18 health. I often find I need to set up a 2 turn lethal by playing very hard into Hell fire and hoping they don't have it. Mulligans: Deadly Poison - SI: Agent - Bloodsail Raider - Ships Cannon - Buccaneer - Southsea Deckhand - Sprint (Keep only if you have two of the above).

Your, and any Oil list really, is going to struggle vs Face Hunter, no way around it. The best way to win in this match up is just to race, aggressively fight for board in the early game and try to leverage a turn 3-5 board state into a sharpsword oil push for lethal. Mulligans Backstab - SI: Agent - Deadly Poison - Bloodsail Raider - Buccaneer - Ships Cannon - Dread Corsair - Tinkers Sharsword Oil (Keep if you have two of the above). - Southsea Deckhand (Keep if you have Ships Cannon).

This is an overview of most of the decks you are likely to be facing on ladder. If you want me to add a specific match up that's not on here feel free to request in the comments. I'll also be adding win %'s on to this post in the near future.

Pretty self explanatory. You have the usual pirate core minus Southsea Captain and the weaker pirates. If you're facing many taunt decks, replace one Bucaneer with the second Sap. If it's Secret Pally or Face Hunter, replace a  Sprint with a Fan of Knives. The current version is the most balanced though.

Unfortunately the problem with cards like these is that this weapon oriented deck plays from hand in a lot of MUs and often doesn't have a lot of pirates on board (especially not at once). They just weren't consistent enough, swag was lost but legend ranks gained.

PS: Don't forget to leave your feedback and post the highest ranks you've achieved with the deck in the comments section. I'll post them in the Hall of Fame. Thanks for your support matey!