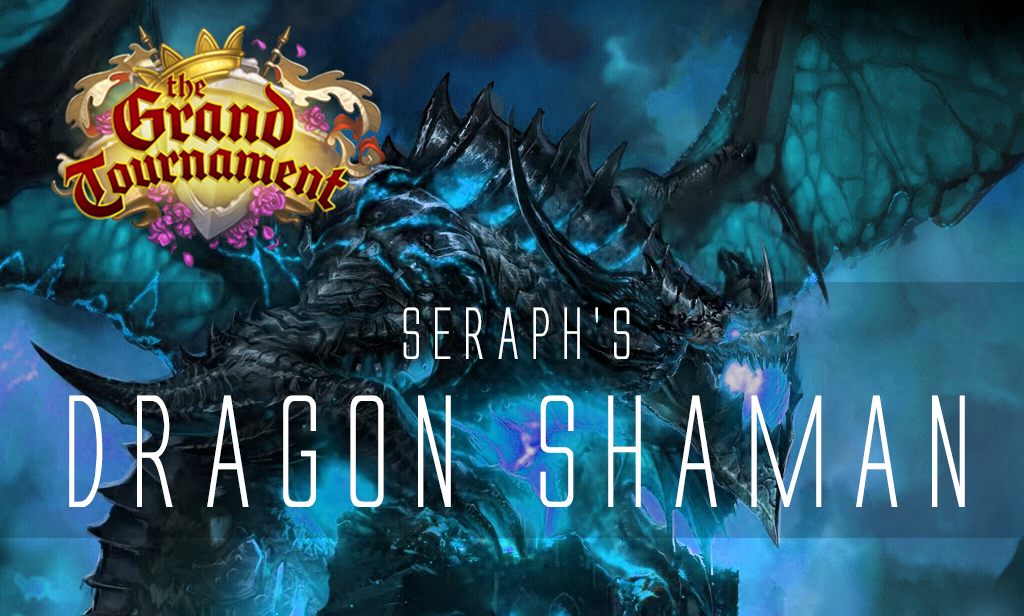 Where Totem Shaman has so far failed to deliver, a number of new neutral and class cards in TGT have made Dragon Shaman viable to the extent that I feel this deck is the most viable Shaman deck currently. The main caveat is that it has a very high skill cap, dicing with death, requiring a fair bit of spell power math and making spectacular tempo swings. The result is a challenging but very fun, rewarding and competitive deck.

The deck uses Healing Wave and Twilight Guardians to stall into the midgame, before a pivotal turn in which you simultaneously clear the opponent's board with AoE, heal to full or near full health, drop minions and clear your overload the same or following turn.

From that point onward you are facing decks that are usually running out of steam while you drop powerful late game minions like Ysera and Malygos, and against control decks you have all the strong class cards that Shaman has had since launch that make it a great match up against decks like Control Warrior.

This is not a SMOrc deck, it has a pretty high skill cap as you need to get a feel for how low you can drop your HP before making your big tempo swings, how to manage your overload and how to mitigate RNG. You play very close to the wire and if you don't get it exactly right then you'll appear to crash and burn. However the difficulty in playing this deck is also part of what makes it so much fun! Once you have mastered it you can swing games your opponent thought were easy wins for them into spectacular wins for yourself!

This deck is strong against Control Warrior, Patron Warrior, Control Paladin, Handlock. It is strong against Face Hunter and Secret Paladin if you draw your AoE and Healing Wave. It is less good against Power of the Wild Druid and Dragon Priest as they tend to buff their minions out of AoE range. It is about 50/50 vs. Combo Druid and very dependent on draws.

Against aggro decks you want to mulligan hard for your AoE, ideally Lightning Storm, and Healing Wave. Burn like Lightning Bolt and Earth Shock can also be useful. You can and should keep Twilight Guardian in your opening hand.

Against both of these decks your strategy is to bait out over-commitment from the opponent, stalling with taunts, controlling the board as necessary to survive using burn and Blackwing Corruptors/Fire Elementals, in order to orchestrate a swing turn in which you clear their board with Lightning Storm or Elemental Destruction, play minions such as reduced cost Volcanic Drake, heal using Healing Wave and clear your overload with Lava Shock, which may be used to pick off any remaining minion eg. the second half of a Piloted Shredder.

This turn can cost as little as 6 mana or more likely 8, so you goal until then is to stall the game until this point using your many control tools in order that you can orchestrate a complete tempo swing where you face an opponent who thought they were inevitably winning, now with board, card and health advantage.

Charged Hammer allows you to pick off straggling aggro minions for the rest of the game, useful against Secret Paladin and Face Hunter, and Lightning Jolt can help clear out midrange minions that survive AoE.

Against control decks your AoE is less likely to be so useful, however control Shaman has always been strong against other control decks thanks to cards like Hex and burn spells. Your win condition is to outvalue your opponent over the long game and still do what you can to bait out multiple minions that you can clear in a single turn.

You have two win conditions against all archetypes. Primarily this is to simply outvalue your opponent over the long game, the second is to discount the mana cost of your burn spells for use with Malygos. One tick from Emperor Thaurissan onMalygos, Lightning Bolt, Frost Shock and Lava Shock allows you to deal 21 damage through taunt on turn 9.

This is a deck that if not played exactly right will crash and burn, but is very strong when you are experienced in the following principles:

In the early game, particularly against aggro decks, your goal is to bait out as much over-extension from the opponent as possible before clearing their board and healing. It can be tempting to AoE too early to protect your health, for example against a Paladin who has played a Knife Juggler and Minibot but before the Muster you know is coming. If a Juggler hits you twice, a Minibot once and Muster deals 4 damage to your face you've still only taken 12 damage, and against an aggro deck Healing Wave will basically always heal you for 14. You should instead focus on popping the divine shield, baiting out more minions then clearing them in one go before casting Healing Wave.

On the other hand once you have had some success this way, you may feel tempted to push your life total too close to the edge. Always try to predict what your opponent is likely to be playing the next turn. Imagine you're at 18hp a Tempo Mage board may look to do only 10 damage next turn, you might think not even a Fireboat can kill you, but don't forget the 2 damage from a Flamewalker. If there's a possibility that you could die next turn to a card likely to be in hand then clear the board now, Elemental Destruction is no good when you're dead.

It can be tempting to use Lava Shock in the early game to take out something like a Knife Juggler, but when you can afford to take 14+ damage in the first few turns provided you draw Healing Wave, that is much better saved for when it can get you value on your Overload.

Using the right removal at the right time, and mulligan for the right removal against different classes, is essential. Against a Druid you can expect a Darnassus Aspirant but you're not going to see a Mad Scientist, so keep Lightning Shock in your opening hand, and discard Earth Shock.

Choosing which burn to use and when and when to use your Hexes requires constantly thinking multiple turns ahead and calculating what you can do with spell power. If you don't do this and just fire away whenever you can then you will run out of steam.

A common question I've seen is what about Divine Shield and Deathrattle, doesn't that screw up your tempo switch? It does and that's why you want to use your other tools to ready the enemy board for AoE down the line, rather than focusing on removing potential face damage. For example if you're facing a Darnassus Aspirant, a Shredder and a Keeper of the Grove, calculate: can Savage Roar kill you? If not yet, then you don't need to use your Lightning Bolt on the Aspirant. Pop the Shredder so that the next turn you can take everything out in one go before healing back up.

Charged Hammer may be expensive but against aggro but being able to take the game slowly means that it can still be useful against aggro whilst turning your hero power into a more effective control tool as the game progresses.

The cost of multiple board clears and direct target removal can sometimes be running low on cards even once you have gained tempo and board control. This is where cards likeYsera, and Inspire cards like Saraad come in useful. Spells tend to be control cards or finishers and so most will benefit a slow deck such as this, and can pair well withMalygos.

This is nevertheless a tech spot and can be replaced with other Inspire mana sinks, an additional Fire Elemental, Sludge Belcher or more early removal such as Stormforged Axe, and The Mistcaller depending on the meta.

You don't run any early game minions in this deck so by the time the midgame comes around you should be able to effectively clear the enemy board without harming your own, and ideally recover your mana crystals with Lava Shock. If your can get value out of your Lava Shock, this is such a high value tempo swing it simply looks broken. If you don't have Lava Shock try to drop a minion following this spell. After using this, Volcanic Drake will often be very cheap or free and can be dropped then in most cases.

Depending on the meta you may run two of these, or substitute a Lightning Storm for an additional Elemental Destruction.

Valuable as another Dragon activator and as a tempo play following a board clear, whether you run one or two is up to you but without running two Lightning Storm and two Elemental Destruction it is less likely to be worth it as a two of.

Failing to draw Healing Wave, Twilight Guardians and your AoE can result in some games being uncontrollable against all in aggro decks. If you are facing many of these, a single Stormforged Axe can increase your potential to hold off the early game before your big tempo swings later on.

If you don't have Nexus-Champion Saraad or Ysera, Chromaggus is a possible replacement. I favour the former two because the first provides a sink for your excess mana in the late game and the latter gives you overpowered cards, but your deck is full of strong control cards that are pretty broken when duplicated so this guy is a very reasonable alternative to either.