I AM CURRENTLY LIVE ON TWITCH:  MY TWITCH PAGE

To fully understand my angle when approaching this deck in the post-TGT environment it would be useful for you to reference my previous build of Tempo Mage, which can be found by clicking the link below:

I was already Legend by the same the expansion came out, but I ran this deck up to 226 Legend from around 1500ish with an overall winrate of 66.7%. 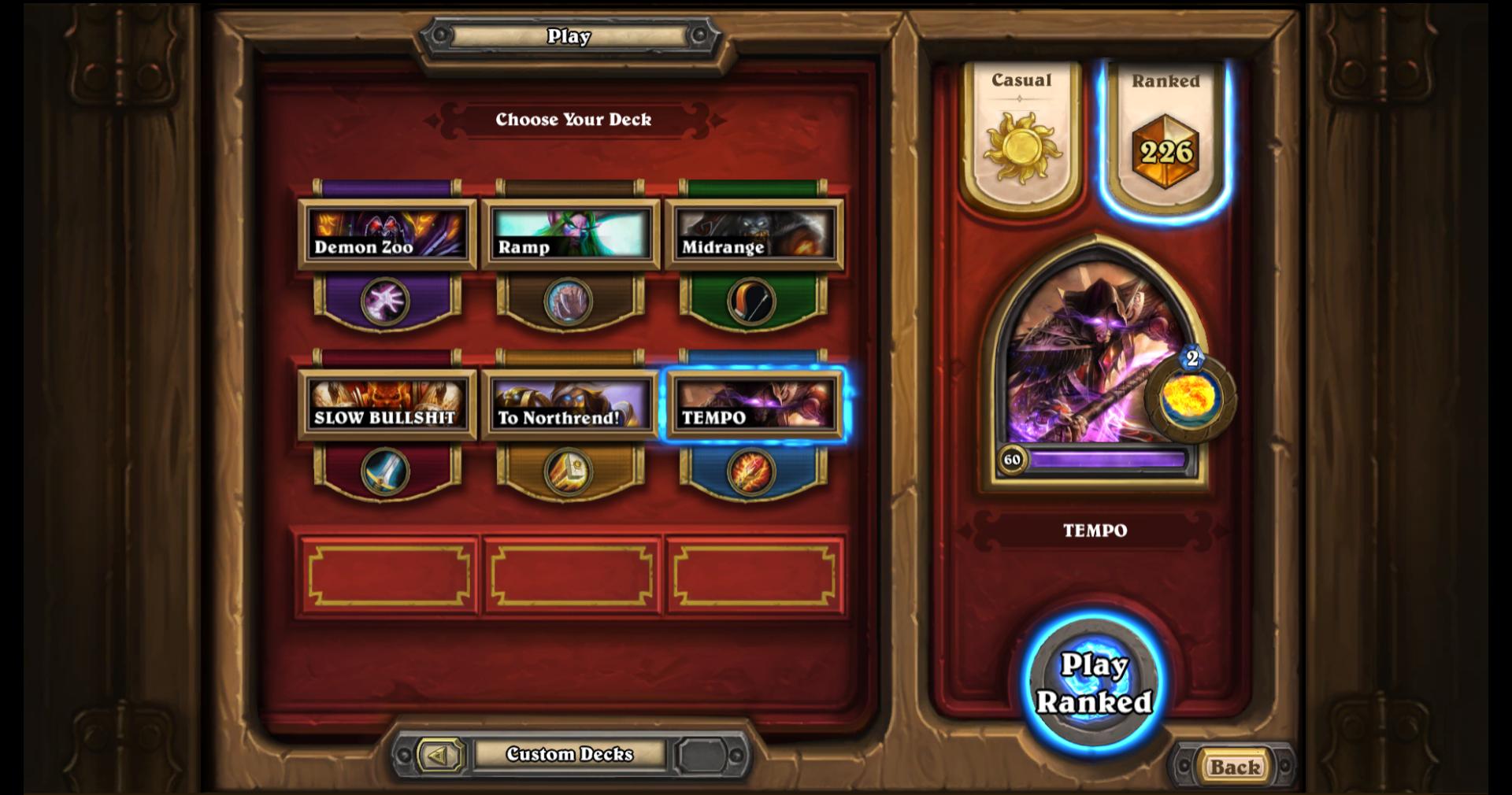 Normally when doing a write-up I go over every single card and why we are running that card but since I have written about Tempo Mage so much lately I don't feel like it is necessary to explain why Mad Scientist is good, etc.  However, we do have other things to discuss, those primarily being the improvements that The Grand Tournament has brought to Tempo Mage.

Arcane Blast:  I have been extremely surprised by this card.  I wasn't even considering crafting it, but since I pulled two copies of it from the 96 packs I opened on the release day of The Grand Tournament I decided to try it out.  It has pretty much proved itself to be strictly better than Arcane Missiles. The problem with Arcane Missiles is that it is random and that it can't target, Arcane Blast however, is not.  The only drawback that Arcane Blast has is that it can't target your opponent, but you would rarely want to target your opponent anyway.  The Spell Damage bonus is what puts this card over the top...being able to do 4 damage with this card when you have an Azure Drake in play is pretty wild.

Effigy:  The best thing about this card is that it serves as a sort of second Mirror Entity without it actually being an Mirror Entity.  Effigy serves a very similar role as Mirror Entity but you don't end up in situations where you can't pull a second secret out of your deck with Mad Scientist or play a second secret from your hand.  Optimally you want to set up it to where you can have Effigy produce you a 4-drop minion or above, but a 2 or 3-drop minion works fine as well.

Rhonin:  Man were people wrong about this card.  The deathrattle on this guy is absolutely unreal, and I was previously running Ragnaros the Firelord as my 8-drop in Tempo Mage and after playing around 100 games with Rhonin I can say that I like Rhonin a whole lot better.  At first glance he looks really slow but his Deathrattle is so powerful that you end up playing Tempo Mage a lot differently than you would if you didn't have him.  With the includion of Rhonin all the sudden I found myself doing things like holding back Flamewaker until turn 10 so I could unload all the missiles generated by Rhonin with waker in play.  This may sound really slow but the meta has slowed down considerably since the release The Grand Tournament.  I've also found that my opponents are a little too eager to kill Rhonin, underestimating his uber power deathrattle.  I'm sure that this will change with time as people will eventually play against him enough to understand that they need to try find ways to mitigate his ability The synergy with Archmage and Flamewaker is unreal and if you draw a Sorcerer's Apprentice late in the game being able to play all the missiles for free is pretty sick.  This card just has value written all over it.

Changes I have made to the July version of my deck that have been dictated by the addition of new cards:

The biggest change to this deck is that I am back to running Archmage Antonidas after not including him since Blackrock Mountain came out.  The reason why I am running Archmage again is because of his undeniable synergy with Rhonin, but since we are running Archmage we have to tailor the deck around him a bit to make sure that we are able to trigger his ability consistently.  This is why I have removed Water Elemental from the deck and included Mechanical Yeti.  While I really like Water Elemental and it is probably my favorite 4-drop in the game I feel like the Rhonin+Archmage synergy is worth altering the core of the deck.

Since we have included Mech Yeti in the deck this causes us to have to remove Counterspell because counterspell and yeti's deathrattle are about as anti-synergistic as it can get.  The last thing you want to happen is to have you opponent trigger your Counterspell by using a spare part made by the yeti and then have them follow it up with a Force of Nature or some other high-powered spell.

Totem Shaman:  Totem Shaman is a pretty slow deck which makes this matchup all about TEMPO TEMPO TEMPO.  You really want to get a fast start against the totem shamans because if you go to the late game they can overwhelm you with all their totems and Thunder Bluff Valiant. You really want to hold back your Fireball in this match to kill Thunderbluff if you can. Flamestrike is super key in this matchup and if you can hold it back a turn or two to get more value out of it then you should.  Be sure to try to draw out their Earthshock before you play your Rhonin if you can.

This deck is pretty wild and also extremely fun to play.  You have to be very careful in playing around their secrets and also have to keep in mind that when you play your secrets that it will buff their Secretkeeper.  Redemption is the most powerful secret in their deck because it can resurrect their minions with Deathrattle, so when you are attacking you generally want to attack the weakest minion first which most likely to be a token.  Flamewaker is key in this match as it helps control their little guys and if you have Flamewaker in your opening hand with The Coin then I advise keeping it.  All of the damage spells in tempo mage really help with this matchup and give you a slight edge.

This deck is very popular on NA ladder at the moment and rightfully so, it is extremely powerful and for the first time in a long time Priest is viable again so I feel like people have been eager to play it since it has been a class that has been neglected a lot over the past few months. Flamecannon is very clutch in this match and is an auto-keep.  The same goes for Frostbolt because it helps you deal with their Northshire Cleric.

While people on NA ladder have been attempting to play pretty much anything that they can imagine I feel like the three decks listed above are the most consistent of the new decks introduced to the meta.  If you have any questions feel free to stop by my twitch.tv and ask me questions.  I stream almost everyday.  If you follow me you will be notified of when I go online.